THE man who swiped Nancy Pelosi’s lectern during the Capitol riots has been arrested in Florida.

It comes as another person involved in the violent disorder “vowed to shoot her in the head on TV”. 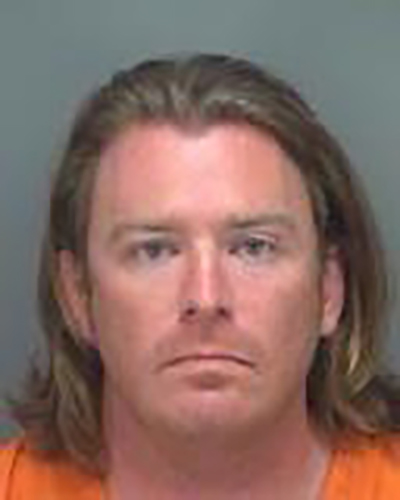 Adam Johnson is currently being held in Pinellas County JailCredit: AFP or licensors 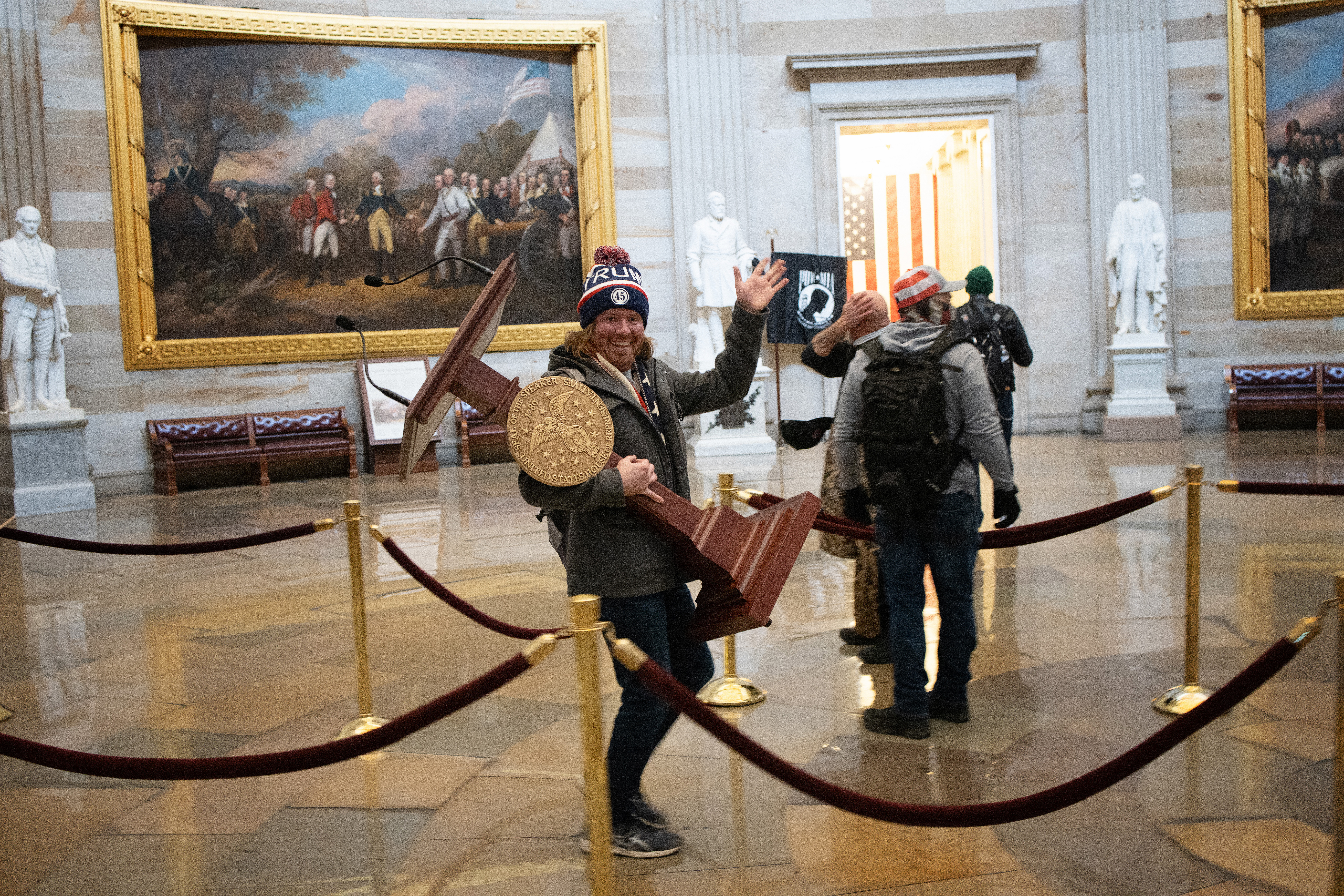 The man, believed to be Johnson, smiles and waves to the camera as he walks off with the lecternCredit: Getty Images - Getty 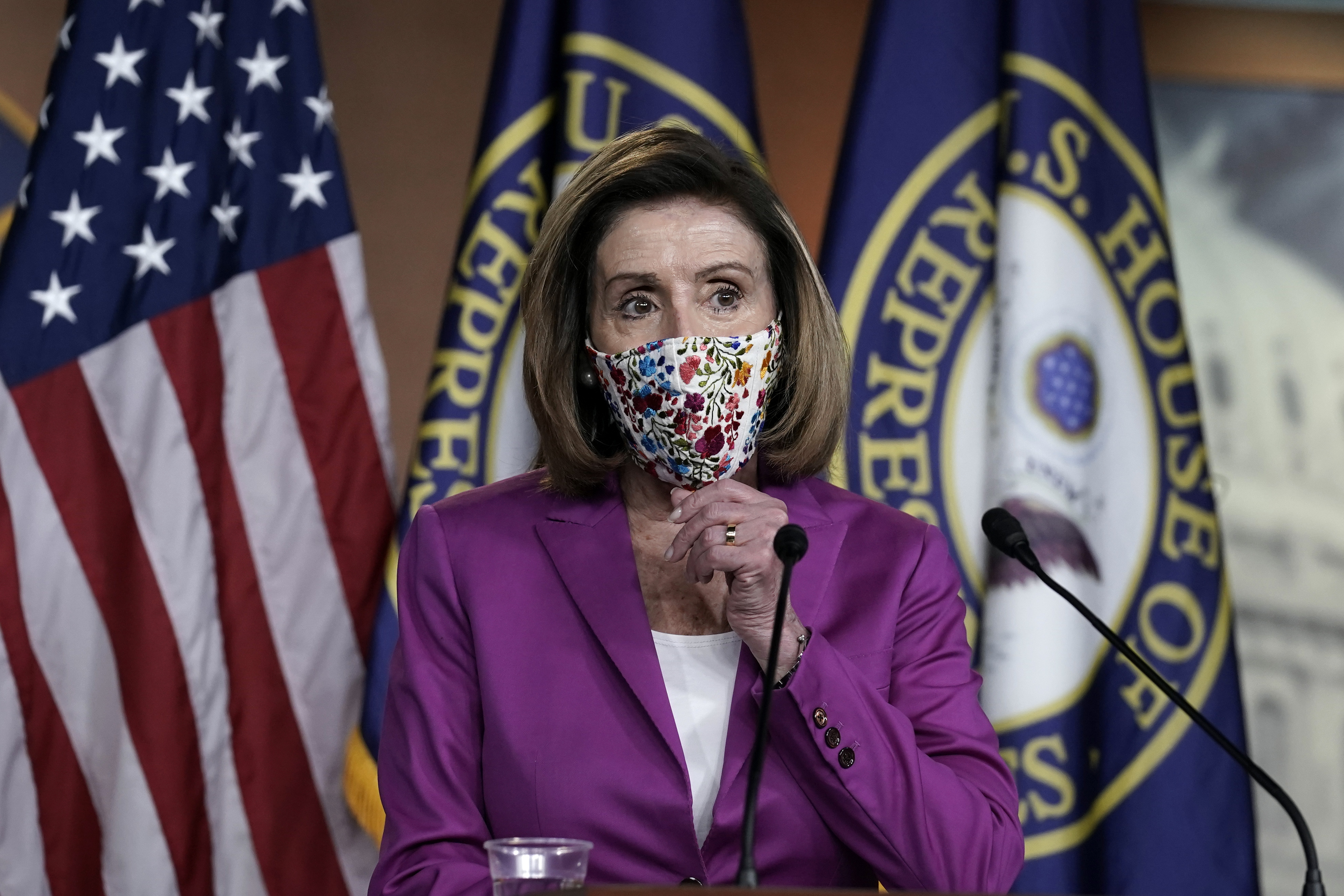 Adam Christian Johnson, 36, from Parrish, Florida, is currently being held in Pinellas County Jail on a federal warrant after he was picked up by US Marshals.

Johnson was photographed carrying off the lectern after the Capitol building in Washington DC was taken over by die-hard Donald Trump supporters, with the image widely shared on social media.

Johnson is a stay-at-home-dad who lives with his wife and their five children, The Bradenton Herald reported.

The dad claimed he was off to Washington DC ahead of the riots in posts to his social media accounts, which have now been taken down.

He also made disparaging comments about the Black Lives Matter movement and law enforcement.

Johnson is said to be the man waving photographers as he carries off the lectern during Wednesday’s storming of the US Capitol by Trump supporters.

In the photo he is sporting a “Trump” hat and a beard but in his mugshot he is clean shaven.

No attorney information for Johnson was immediately available.

Where the lectern is now is unclear.

Also facing federal charges is Cleveland Grover Meredith Jr who is alleged to have sent a text message saying he was thinking of “putting a bullet in [Pelosi’s] noggin on Live TV” and another that said he was headed to Washington with “a s**t ton of … armor piercing ammo,” according to CNN.

He is also said to have texted a message about running over Pelosi, using purple devil emojis and a number of slurs for women in his texts.

Meredith has been charged by the Feds with writing threats and possessing an unregistered firearm and ammunition.

He will be held at least until a court hearing next week, according to court documents seen by CNN.

Meredith let the FBI search his room at a Holiday Inn in southwest Washington as well as his phone, truck and its trailer.

Agents found three guns - a Glock 19, a 9mm pistol and an assault rifle – inside the trailer and “approximately hundreds of rounds of ammunition.”

The complaint said Meredith knew the city’s gun laws meant he was not supposed to have firearms so he put them in the trailer.

The man who was pictured sitting at Pelosi’s desk, Richard “Bigo” Barnett, is also said to have been caught by cops.

He was hit with a number of charges – including entering and remaining on restricted grounds, theft of public property, and violent entry, according to NBC.

The Speaker’s office was ransacked with a laptop reportedly stolen during the disorder.

The news came after the Department of Justice warned that National secrets may have been stolen when Trump supporters stormed the US Capitol on Wednesday.

Others who have since been detained due to their part in the Capitol riot include Lonnie Coleman, 70, of Falkville, Alabama, who was busted carrying an assault rifle near his truck packed with 11 Molotov cocktails near a Congressional office building a couple of blocks from the Capitol.

Christopher Alberts, of Maryland, was accused of wearing a bulletproof vest and carrying a handgun and 25 rounds of ammunition on Capitol grounds.

Democrats are currently pushing for Trump to be impeached during his final days in the White House, saying the President “incited insurrection” by his supporters to take over the Capitol building.

Speaking to Sean Hannity on Fox News, Graham appealed directly to the House speaker and President elect to call off impeachment.

"I wanted President Trump to win so badly,' he said.

"Now, tonight, I am calling on President-elect Biden to pick up the phone and call Nancy Pelosi and the squad to end the second impeachment.

"President Trump gave a statement last night that was helpful. It hit the mark. He wants to move on to a peaceful transfer of power. He wants this to end." 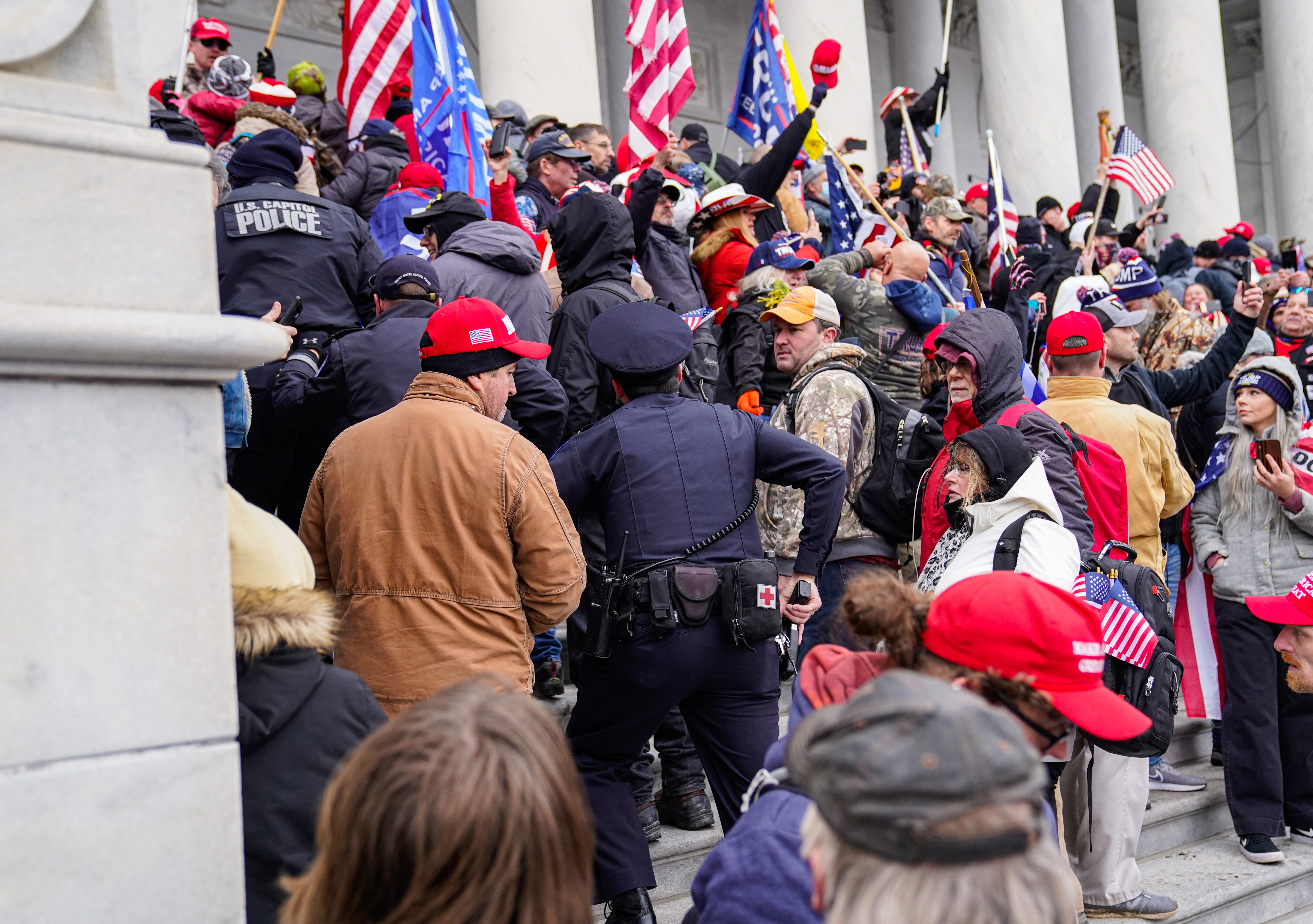 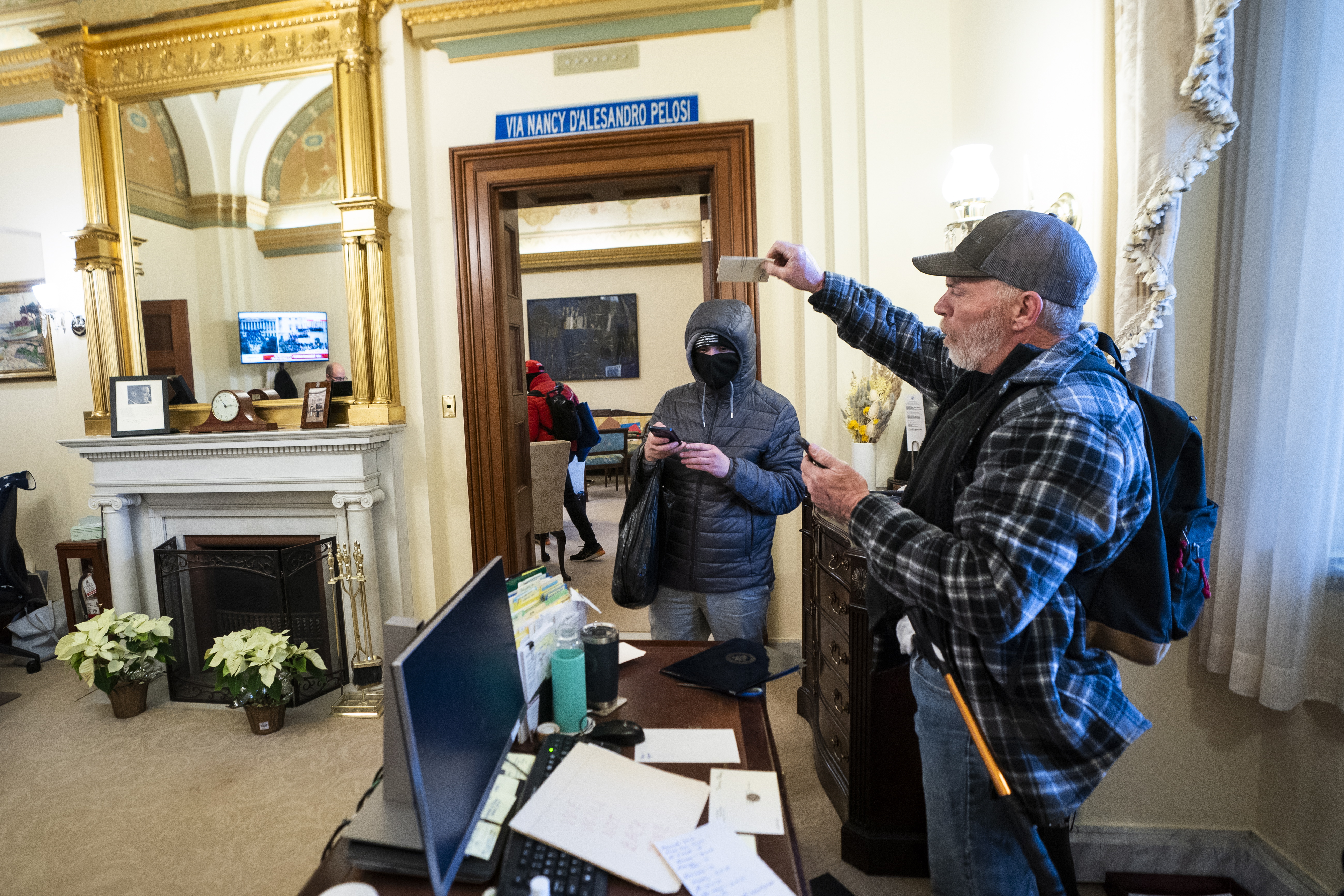 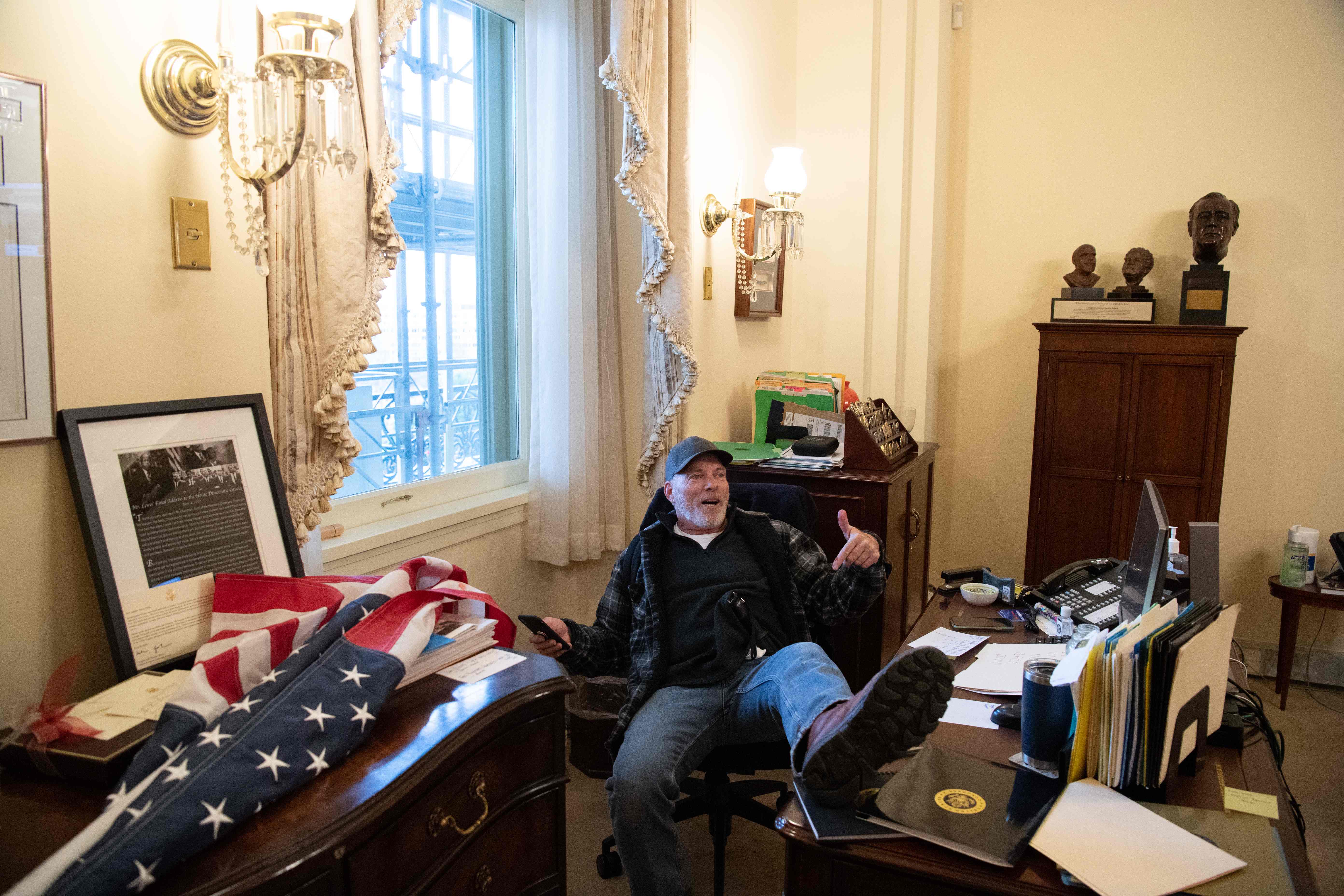 Barnett was photographed with his feet up on Pelosi's deskCredit: AFP or licensors