Ashley Cain and his fiancée Safiyya Vorajee have marked their daughter Azaylia turning eight months old by getting keepsake castings of her hands and feet.

Safiyya, 34, shared a video of her singing to Azaylia before the couple had her hands and feet moulded, after bringing their daughter home from hospital at the end of the week.

The couple had shared a heartbreaking update with fans after doctors told them that the treatment Azaylia had been having for leukaemia was no longer working and had given the little girl just days to live.

Ashley, 30, and Safiyya have vowed to make the most of all the time they have left with their daughter and Safiyya told her followers that she wants to ensure Azaylia’s last days are full of happiness.

Singing I Wanna Be Like You from The Jungle Book as she cradled her baby girl, Safiyya wrote: ‘Happy 8months beautiful. Our fav song.’ 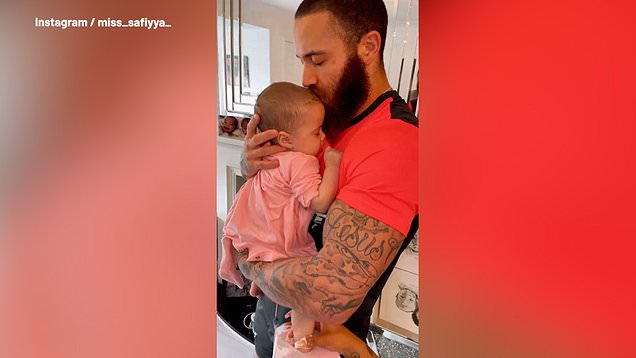 ‘I only ever want you to see happiness and experience love. Love you.’

Ashley was later seen holding Azaylia as a helped dipped her tiny feet into tubs of a rubbery product to mould the shape of her feet and hands.

The doting mother explained: ‘It’s Azaylia’s eight months birthday today, so we’re getting her castings made and getting all the mixtures put in.’

She joked: ‘I think we are going to run out of product. We have got so many people wanting these castings, it’s nuts.’

Ashley and Safiyya had been hoping to take Azaylia to Singapore for a year-long course of potentially life-saving treatment, and had fundraised over £1.5million to go towards the alternative therapy.

However, the trip was no longer able to go ahead after doctors found more tumours and treatment was no longer working to combat Azaylia’s leukaemia.

If you’ve got a celebrity story, video or pictures get in touch with the Metro.co.uk entertainment team by emailing us celebtips@metro.co.uk, calling 020 3615 2145 or by visiting our Submit Stuff page – we’d love to hear from you.

MORE : Ashley Cain shares pictures of daughter Azaylia’s last bath in hospital before bringing her home as baby is given days to live