But shop owner Sam Collins, 40, insists the nude advert in Arnold, Nottinghamshire, is "harmless fun - it's just a lady taking a shower." 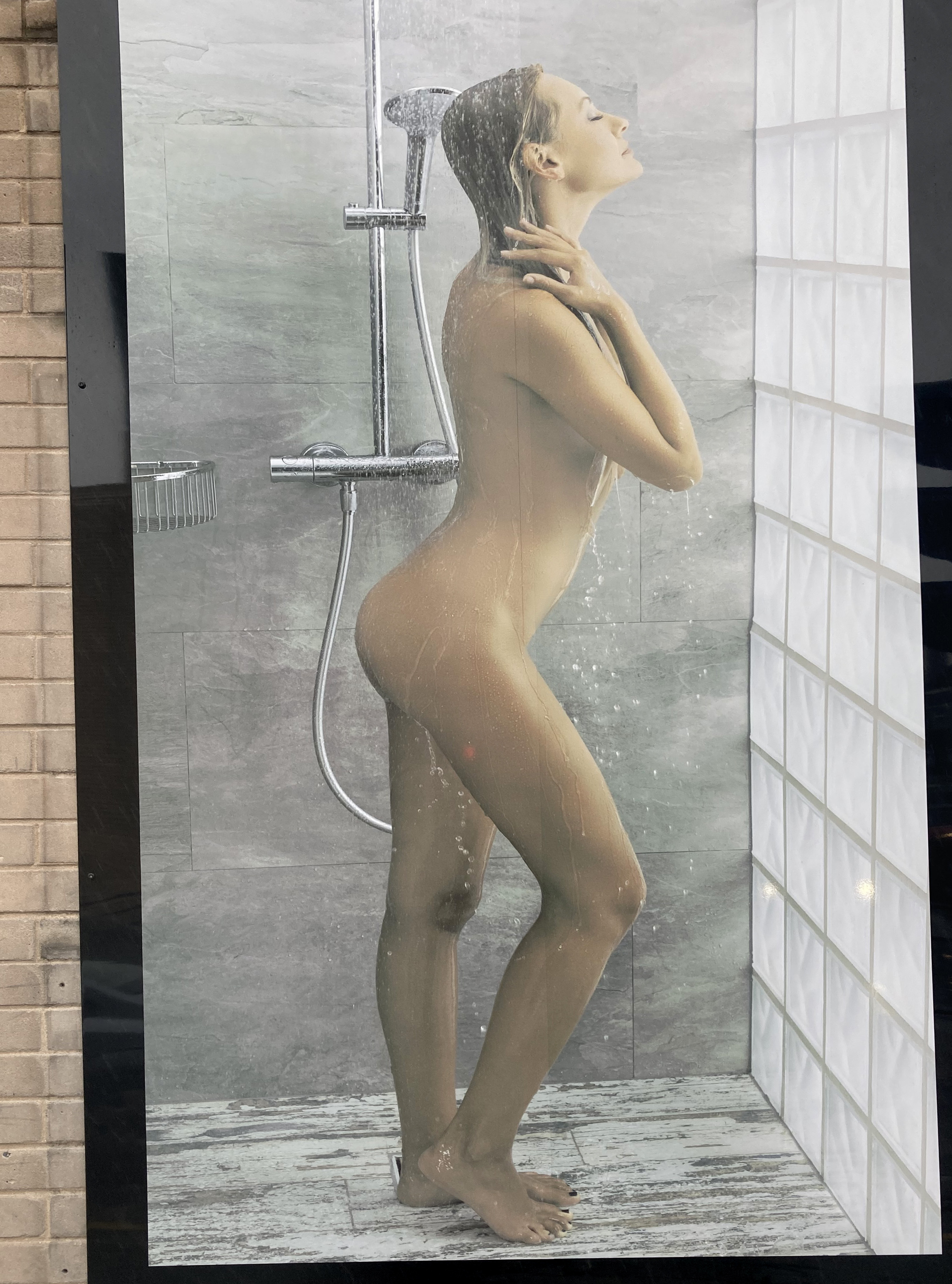 The woman's stark-naked profile on the side of The Bathroom Store has been reported by the local council to the Advertising Standards Authority (ASA).

Angry bureaucrats also claimed the advert is possibly a public safety issue as drivers could be distracted.

Collins insists the image is no worse than what can already be seen on television and social media.

He said: "There's nothing rude and she's not really baring anything.

"Seeing how stressful life is at the moment, we thought people could laugh and smile about it."

But unimpressed council officials have demanded he remove the advert during a probe.

Planning staff are checking whether the nude advert breaks rules.

If it's found to breach planning regulations, the poster can't be used.

The cheeky poster, in full view at the junction of two busy roads, has divided opinion among local people since first appearing in town two weeks ago.

Shopper Denise King, 64, said: "It would be difficult to explain away to young grandkids who can be apt to asking difficult questions.

"But there again teenage boys probably think it's quite good."

Resident Jenny Dexter, 59, added: "It's at busy traffic lights so I guess it could be a road hazard if any drivers start gawping at it."

Shopper John Gill, 32, asked:"How can it cause any offence in today's world?

"Nudity is all over social media and the television. 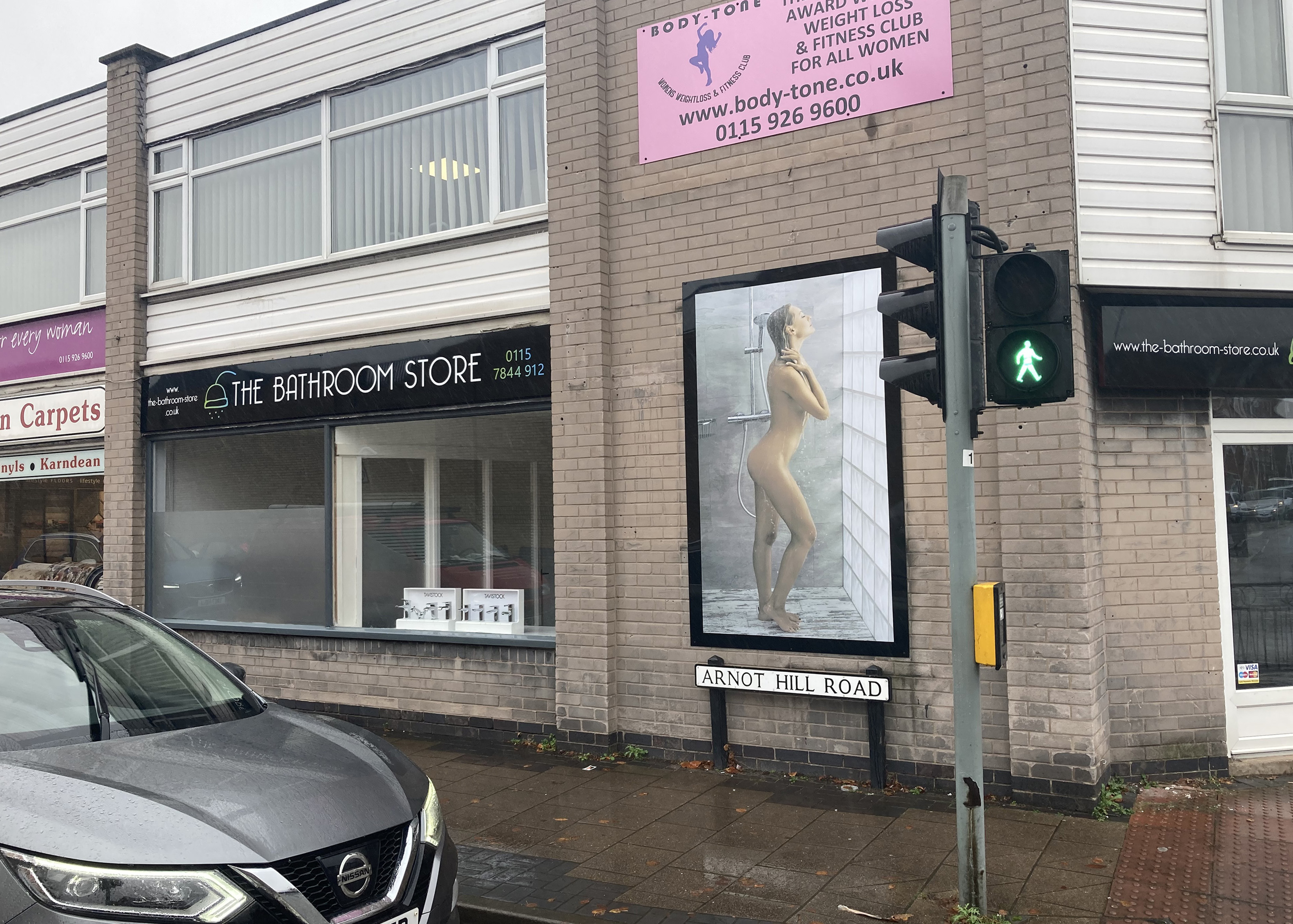 The full-sized advert is right near traffic lights, and could be a distraction say council plannersCredit: Raymonds Press

"It's no worse than what you see in magazines and newspapers and there are plenty of nude paintings in museums."

"They sell bathrooms and it just shows a woman enjoying a shower. What do people want, a woman taking a shower in her clothes?"

Nicole Linford, 28, who works in the women's-only Body-Tone gym on the same road, said people had wrongly assuming it was the centre's advert.

She said: "Some of our members have complained that they find it distasteful, and we can understand that.

"We also have an issue that people have wrongly assumed that the advert is ours so we have had to go out of our way to say it isn't.

"Personally I don't have an opinion about it.

"It's not something that weighs on my shoulders. It's a mixed-up world out there and people are always going to have different opinions."

A Gedling Borough Council spokesman said the advert was put up without planning consent - so the store owners were told to take it down.

He confirmed it was council policy to also report it to the ASA, which is now also investigating.

The spokesman warned that "failure to get consent is a criminal offence".

Council planners would need to consider the "visual impact" and "any detrimental effect on the area".

They also have to look at any potential public safety issues "including distractions to people driving.

"Unfortunately, the owners of this particular hoarding did not apply for consent with the council."

He said: "An officer has visited the owner and instructed them to remove it as it does not have the required consent - the owner will be removing the advert as soon as possible."