The easing of restrictions will see two households allowed to meet up outside by Easter under the PM's end-of-lockdown blueprint.

The Prime Minister’s five-month “Roadmap to Recovery” will allow outdoor mixing in parks and possibly gardens by Good Friday on April 2.

It comes after warnings that the third lockdown should NOT be lifted in the UK until we have "nearly eradicated" Covid, says the British Medial Association.

The head of the doctors' union said there was a "growing consensus" that the number of cases needs to reach levels not seen since last summer before any moves to reopen the country go ahead.

On Monday, the PM will announce the UK's route out of lockdown, which he insisted would be "cautious but irreversible" but the BMA says the NHS remains in a "precarious" position and could easily be overwhelmed again.

The news comes amid fears a new Covid "super-variant" found in Finland - that doesn’t show up in tests - could be fuelling its spread.

Follow our coronavirus live blog below for the very latest news and updates on the pandemic...

Ant and Dec joked about boredom and lockdown fatigue as Saturday Night Takeaway returned to ITV but without a live studio audience.

Coronavirus restrictions meant the flagship variety show, now on its 17th series, was filmed live in front of a virtual audience of 300 people.

The show opened with a black and white sketch of the duo staying at home through January and early February, looking bored and depressed as they baked endless banana bread and did jigsaws in their pyjamas.

Brazil registered 1,212 additional COVID-19 deaths and 57,472 new confirmed cases of the virus on Saturday, according to data released by the Health Ministry.

All adults in the UK should be offered a coronavirus vaccine by the end of July, Boris Johnson has pledged.

The Prime Minister said the accelerated rollout would help protect the most vulnerable sooner and enable the easing of some restrictions.

Adults aged 50 and over - as well as those with underlying health conditions which put them at higher risk - will be offered a vaccine by April 15 under the expedited plans.

By July 31, all adults should have been offered a jab - though the order of priority for those under 50 has yet to be outlined by the Joint Committee on Vaccination and Immunisation (JCVI).

Ministers had set a target to offer vaccines to all adults by September, with an aim to reach all those aged 50 and over in the first nine JCVI priority groups by May.

Jeremy Corbyn today branded the Government and NHS Test and Trace system as a “disaster”.

He shared a petition on Twitter which is calling to “save lives, scrap Serco now”.

Cities in France could face tougher restrictions - after the country rejected calls to go into a third lockdown earlier this year.

Health minister Olivier Veran admitted Covid infections are spreading rapidly and said further clampdowns on movement could be required in Nice and surrounding areas in the coming days.

NHS England also announced a further 371,906 first doses of the vaccine had been given out yesterday, with 15,294 second doses also rolled out.

OUTDOOR FAMILY GATHERINGS COULD BE ALLOWED WITHIN WEEKS AS LOCKDOWN EASES

Outdoor family reunions could be allowed within weeks while care home residents will be able to hold hands with a loved one again under the Government's road map for easing coronavirus restrictions.

Several newspapers reported that new rules allowing two households to meet outdoors - regardless of the total number of people - are set to be introduced from April, while six people from six different households would also be able to gather.

Number 10 dismissed as speculation reports that pubs could be permitted to serve customers outdoors from April, with the Daily Mail saying that people could be served indoors in May.

Schools look set to reopen to all pupils from March 8, with both primary and secondaries said to return in just over three weeks.

Plans for visits to care homes allowing hand-holding have been given a cautious welcome by organisations in the sector.

There have been calls for clarification on the details of the new arrangements, and a warning that staff resources will be key to implementing them.

Care home residents will be allowed to hold hands with a regular indoor visitor from March 8 under the Government's plan to ease lockdown restrictions in England.

Visitors will be required to take a coronavirus lateral flow test - which gives quick results - before entry and personal protective equipment (PPE) must be worn.

Residents will be asked not to hug or kiss their relatives, and guidance for care homes is expected to be published in the next fortnight.

JOHNSON VOWS LOCKDOWN LIFT WILL BE DRIVEN BY DATA, NOT DATES

Ministers are reviewing a dossier of data this weekend to help decide on the speed of the government’s "Roadmap to Recovery" blueprint.

Mr Johnson has vowed to be driven by data not dates in his “cautious and prudent” lifting of Covid restrictions, starting on March 8 with reopening schools.

But the return to schools could be staggered after unions claimed plans for a blanket reopening were"reckless".

Unions insisted only children should go back with older ones staying at home longer to prevent the “danger of causing another surge in the virus”.

CHART: COVID VACCINATIONS IN THE UK 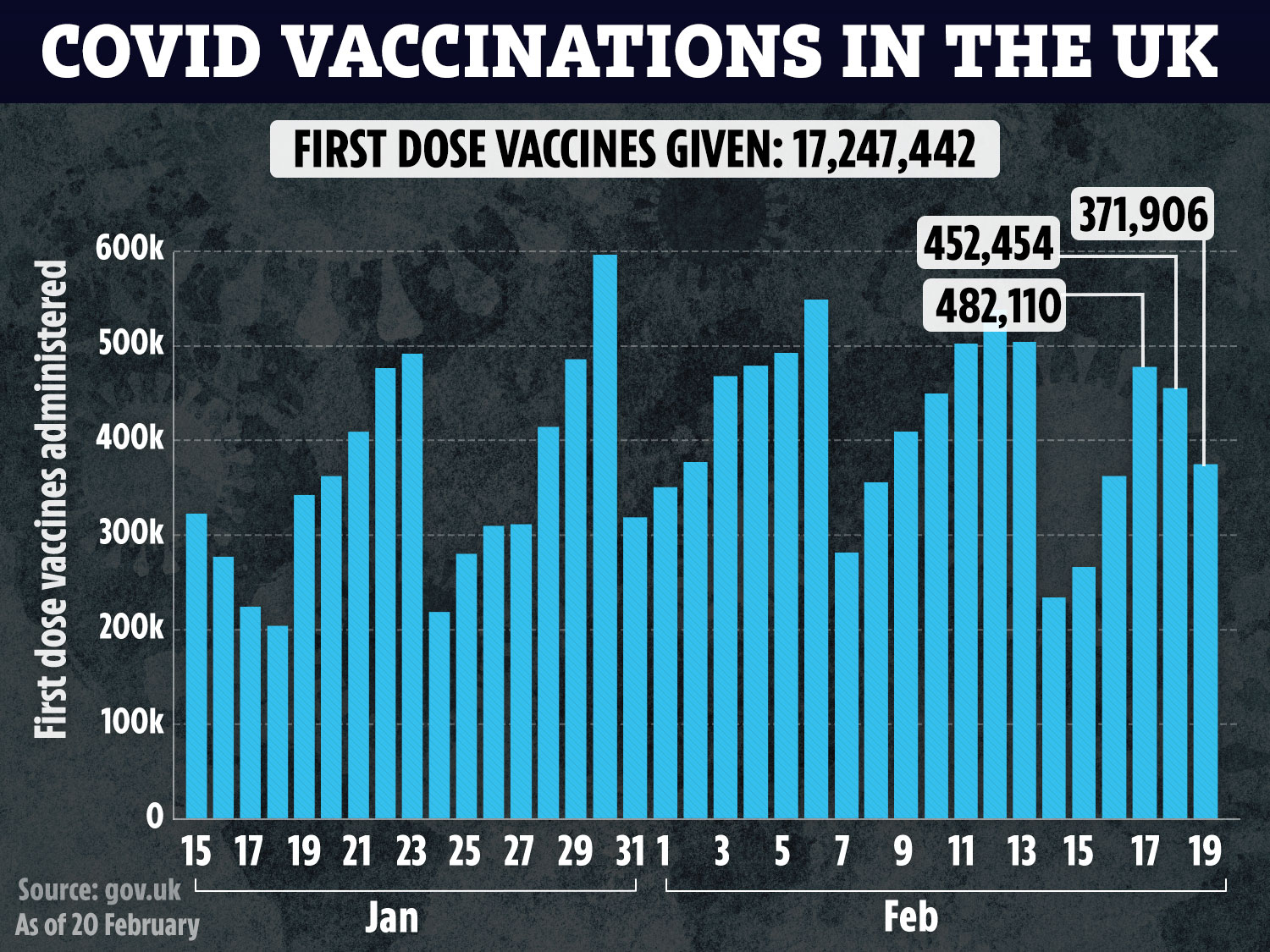 A TEENAGER with no underlying health conditions has died after testing positive for Covid.

The 16-year-old is the second youngster without any known illnesses recorded to have died in just two days.

COVID-19 ROUND UP: WHAT'S HAPPENED TODAY?

Hopes have been raised that pubs and family meet ups outdoors could be allowed in April as the PM prepares his lockdown roadmap. Hairdressers could stay shut until April as government sources stressed there is 'still some time to go' for close contact services. Majorca and Ibiza are pushing to be the first part of Spain to welcome Brit tourists with vaccine passports this summer. Grandchildren will be able to hold hands with grandparents by March 8 under new care home rules. Professor Chris Whitty is reportedly 'very unhappy' with Boris Johnson's plan to reopen schools.

Covid-19 deaths have plunged 28 per cent in a week with 445 fatalities reported today.

He added: "The trouble that Tricia's had is she hasn't seen anybody except in a mask for six months, and it's mighty difficult for someone with dementia to understand what's going on and who is who."

Due to entry requirements, a couple of falls requiring hospital trips and Covid cases being detected at the care home, Mr Blakstad estimated his wife had spent nine weeks in isolation overall.

Under care home guidance for England, new residents or those being discharged from hospitals should be isolated for 14 days in their room to minimise the risks to other residents.

"I'm sure that is where the real damage is done," Mr Blakstad argued.

He added: "I believe that since everybody in the care home has been vaccinated, including the staff, and since we now have tests, I would suggest that they look very hard at whether we really need 14 days of isolation - it could be 10, it could be five."

A retired TV executive said he was told restrictions to protect care homes from Covid-19 had accelerated his wife's Alzheimer's disease, and argued that plans to allow regular visits from March are "too little too late".

Michael Blakstad, 80, said that with the rollout of testing and coronavirus vaccines in England, the Government should be "flexible" and "more scientific" over the application of care sector rules.

His 79-year-old wife Tricia entered a south Hampshire care home in July and his visits have been largely limited to half-hour distanced interactions behind a Perspex screen while wearing a face mask.

Mr Blakstad, who has Parkinson's and uses a wheelchair, said: "It's a very unreal experience - she kept trying to get through the Perspex screen because she doesn't like being cooped up and tried to get to me, and that wasn't very nice."

Police have issued a £10,000 fine to a street church in Nottingham after they organised a service today.

Officers issued the penalty despite previously allowing them to host gatherings.

Pastor Chez Dyer confirmed the fine and has said he will fight it.

The latest figures show a further 307 coronavirus deaths in English hospitals, bringing the total to 81,046.

IRISH PM SEES NO REOPENING OF PUBS UNTIL MID-SUMMER

Ministers will not consider reopening hospitality until the middle of the summer, the Taoiseach said.

Three cases of the potentially more infectious Brazilian mutation have been detected in Ireland.

Mr Martin said: “We don’t foresee that (reopening pubs etc) before the middle of the summer.

“What the public health authorities are saying is that we stick with this until end of April, then we reflect on the situation and make decisions about the months ahead.”

Jeremy Corbyn today branded the Government and NHS Test and Trace system as a “disaster”.

He shared a petition on Twitter which is calling to “save lives, scrap Serco now”.

More than 17million people have received their first Covid jab.

And 604,885 people have had both their first and second doses.

Coronavirus deaths have plunged 28 per cent in a week with 445 fatalities reported today.

The rise in fatalities brings the total number since the beginning of the pandemic to 120,365.

It is smaller than the 621 deaths recorded last Saturday, and nearly half the figure of 828 reported on February 6.

But today's increase in cases is slightly larger than the 9,765 infections recorded last week.

The boss of Leon has warned that a longer Covid lockdown "will cost lives" as he reveals that the food chain is losing £200,000 a week.

John Vincent, 49, said that businesses on the brink of collapse because of the pandemic need a lifeline - as they are at the "heart of society".

Speaking on BBC Radio 4's Today programme, Mr Vincent said it was "quite possible" that Leon could fold "if weeks and months drag on".

He said: "What concerns me is the voices I’ve heard in the past few weeks, which is 'what does it matter if lockdowns go on a few months or few weeks longer than necessary?'

"I tell you, it matters hugely. I tell you therefore, how can we be making this decision about the impact on the young, today and on their futures?"

The All Party Parliamentary Group for Radiotherapy has called for the Government to tackle the backlog of cancer cases due to the pandemic.

The group's chairman Tim Farron said: "We are deeply concerned the Government has underestimated the scale and severity of the Covid cancer backlog.

"Without extra capacity, the backlog will not get cleared for many years and thousands of loved ones will die unnecessarily."

He also tweeted yesterday: "Our cross-party group of 75 MPs have written to the Prime Minister, urging him to intervene to tackle the cancer backlog.

"The Government have rightly moved heaven and earth to save lives from Covid – it’s time the same was done for cancer patients."