Struggling funeral homes are demanding more staff to avoid a repeat of the disastrous first wave, when care homes were found filled with bodies, and burials were hit by delays. 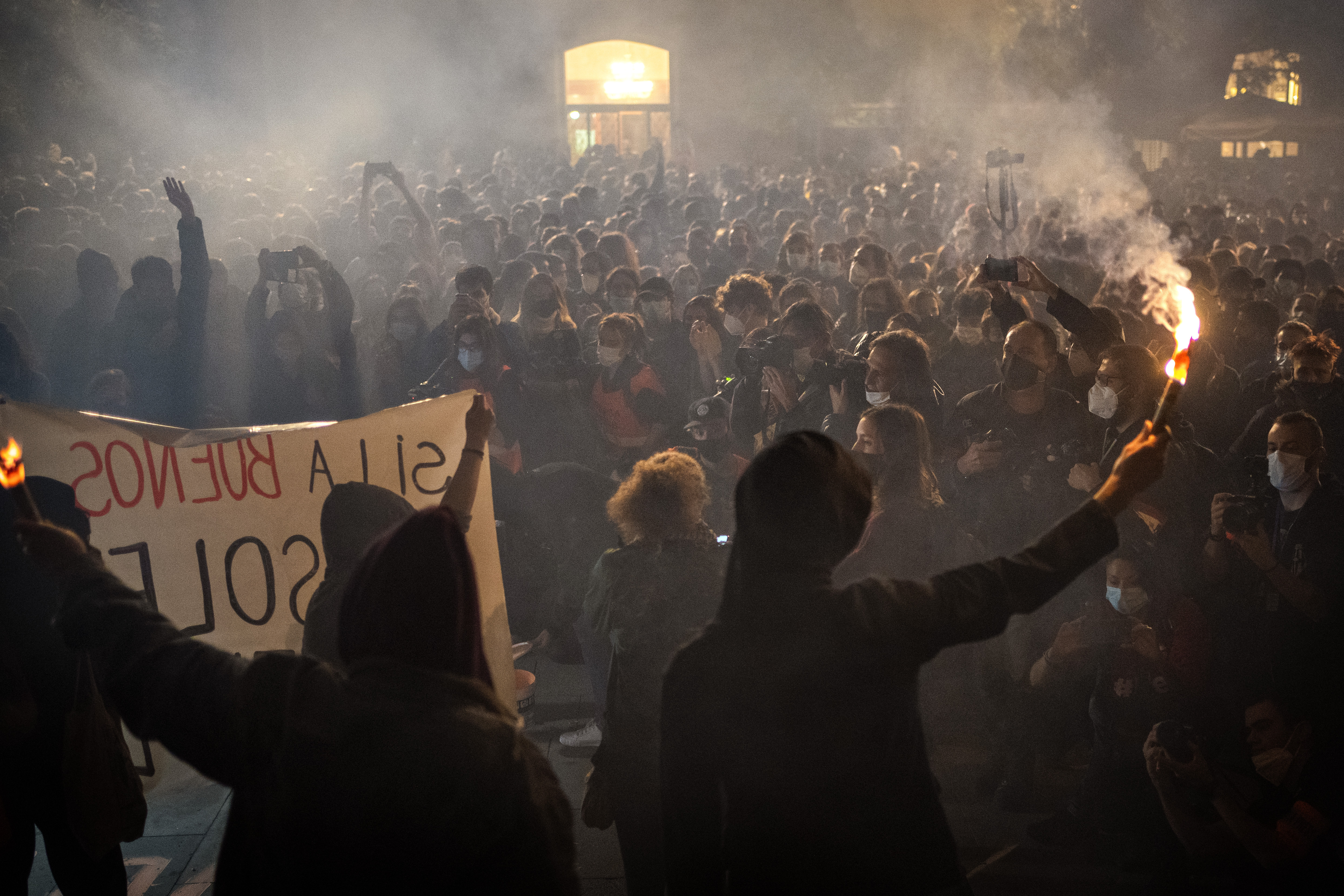 Protesters in Barcelona protest the mandatory closure of bars, restaurants and other businessesCredit: AP:Associated Press 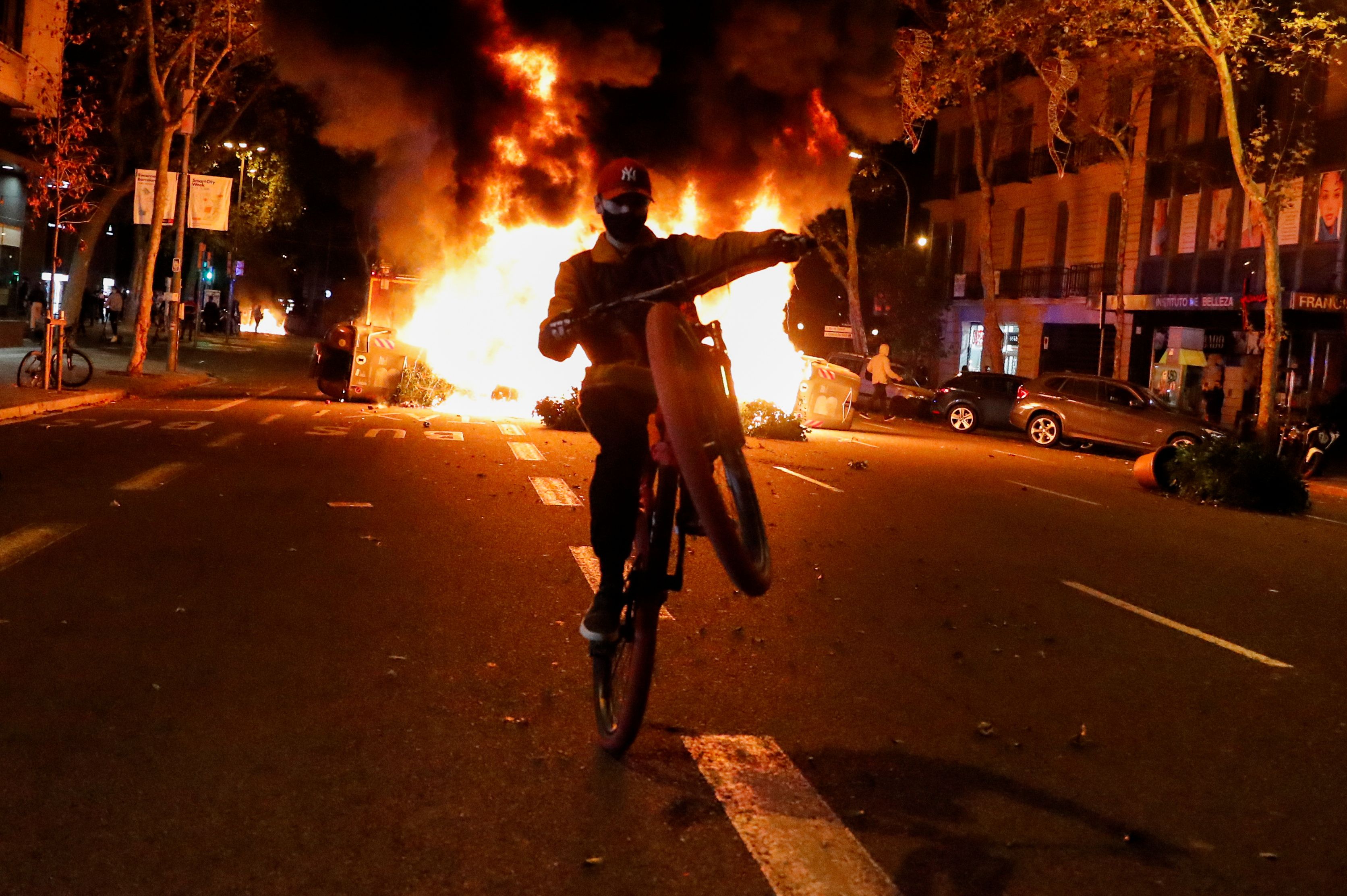 Demonstrators have been attacking the police in SpainCredit: Reuters 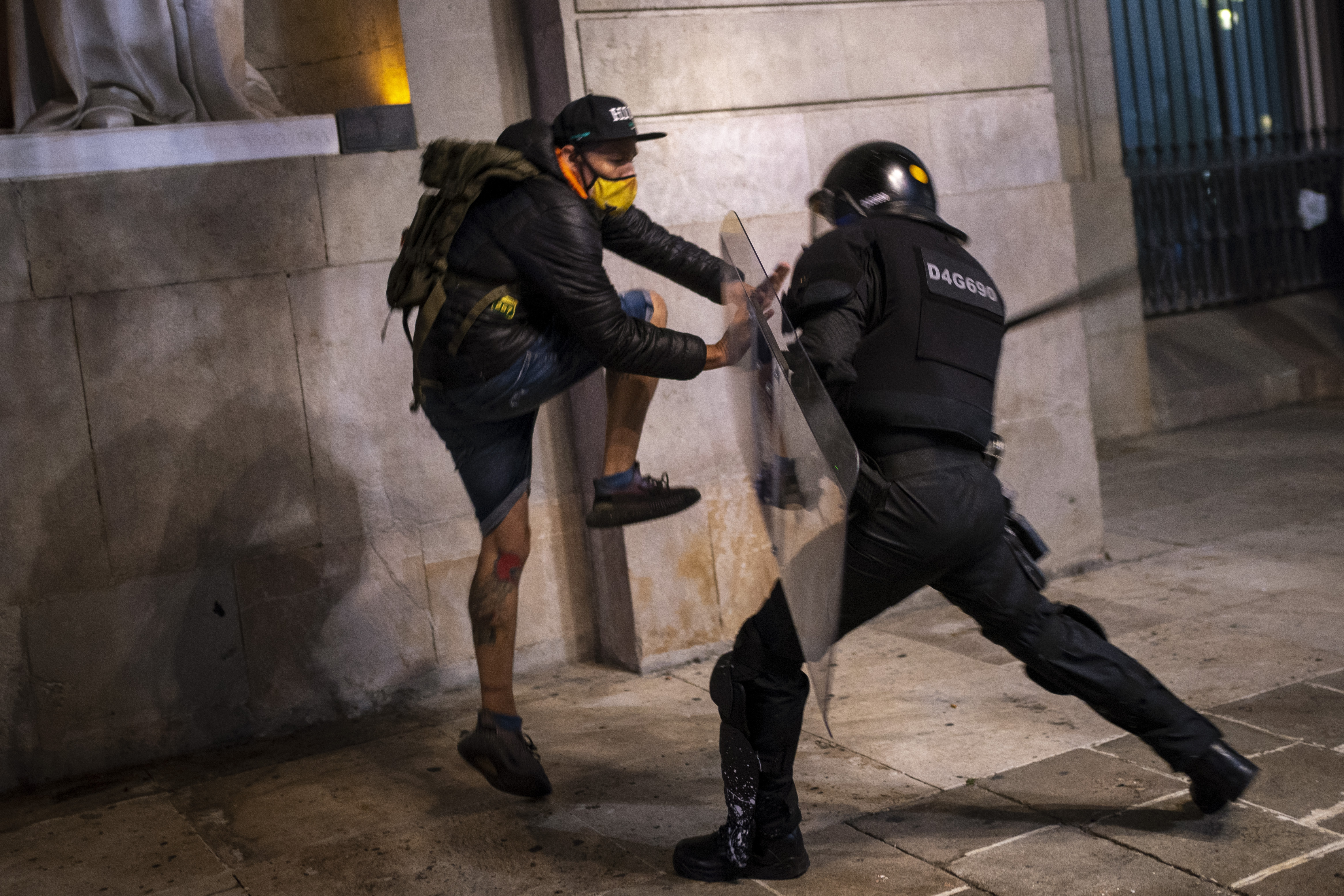 Spain is one of Europe’s worst Covid-19 hot spots, with nearly 1.3million cases, and about 36,000 deaths, according to Worldometers' data.

Spain’s prime minister has condemned violent protests in cities across the country after a six-month state of emergency came into effect.

Riot police shot blank bullets to try to disperse scores of protesters who were setting fire to rubbish bins in Madrid’s main thoroughfare Gran Via.

Meanwhile, demonstrators pelted police with rocks and other projectiles in Barcelona in a second night of disturbances in Spain’s second-largest city.

In the northern Spanish city of Logroño, about 150 people attacked police with stones, set fire to containers and looted shops, said cops over the weekend.

Riot police were drafted in to quell disturbances in Haro, in the wine-growing region of La Rioja.

Prime Minister Pedro Sanchez tweeted: “Only from responsibility, unity and sacrifice will we be able to defeat the pandemic that is devastating all countries.

"Violent and irrational behaviour by minority groups is intolerable. It is not the way.” 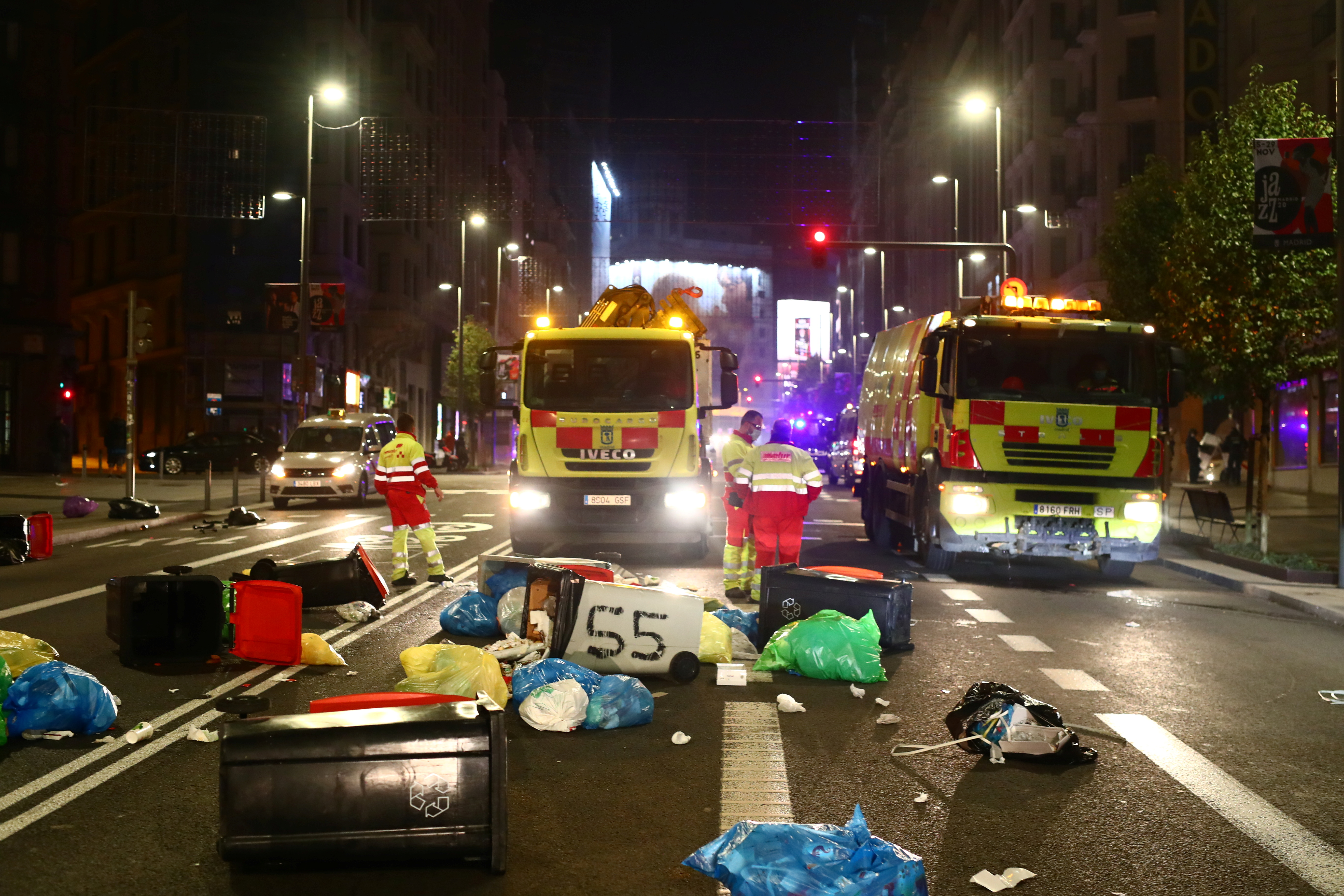 Bins are overturned bins during a protest against the closure of bars and gyms in Madrid last nightCredit: Reuters 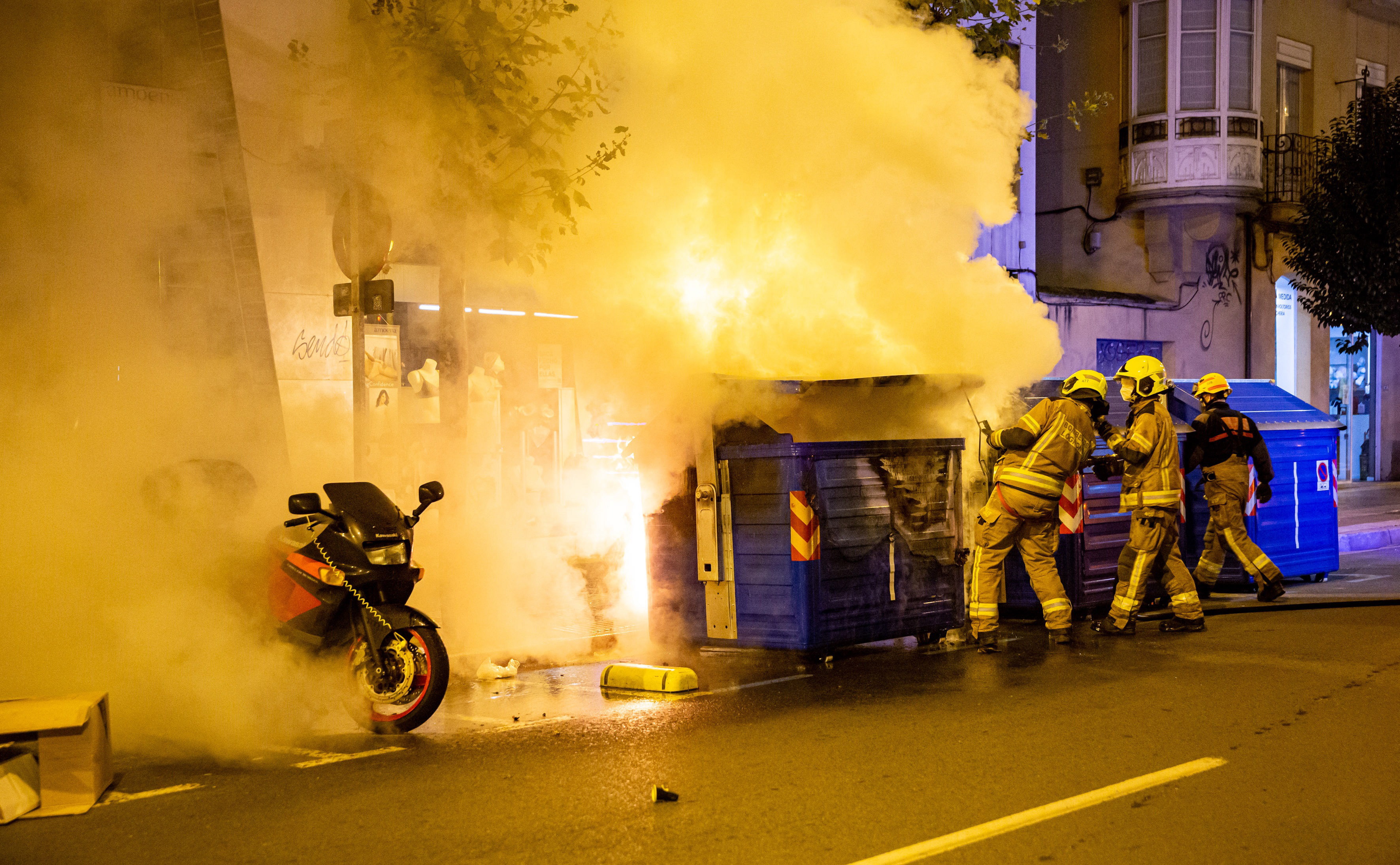 Firemen put out a fire as clashes erupted during a demonstration against coronavirus restrictions in Logrono, northern Spain last nightCredit: EPA 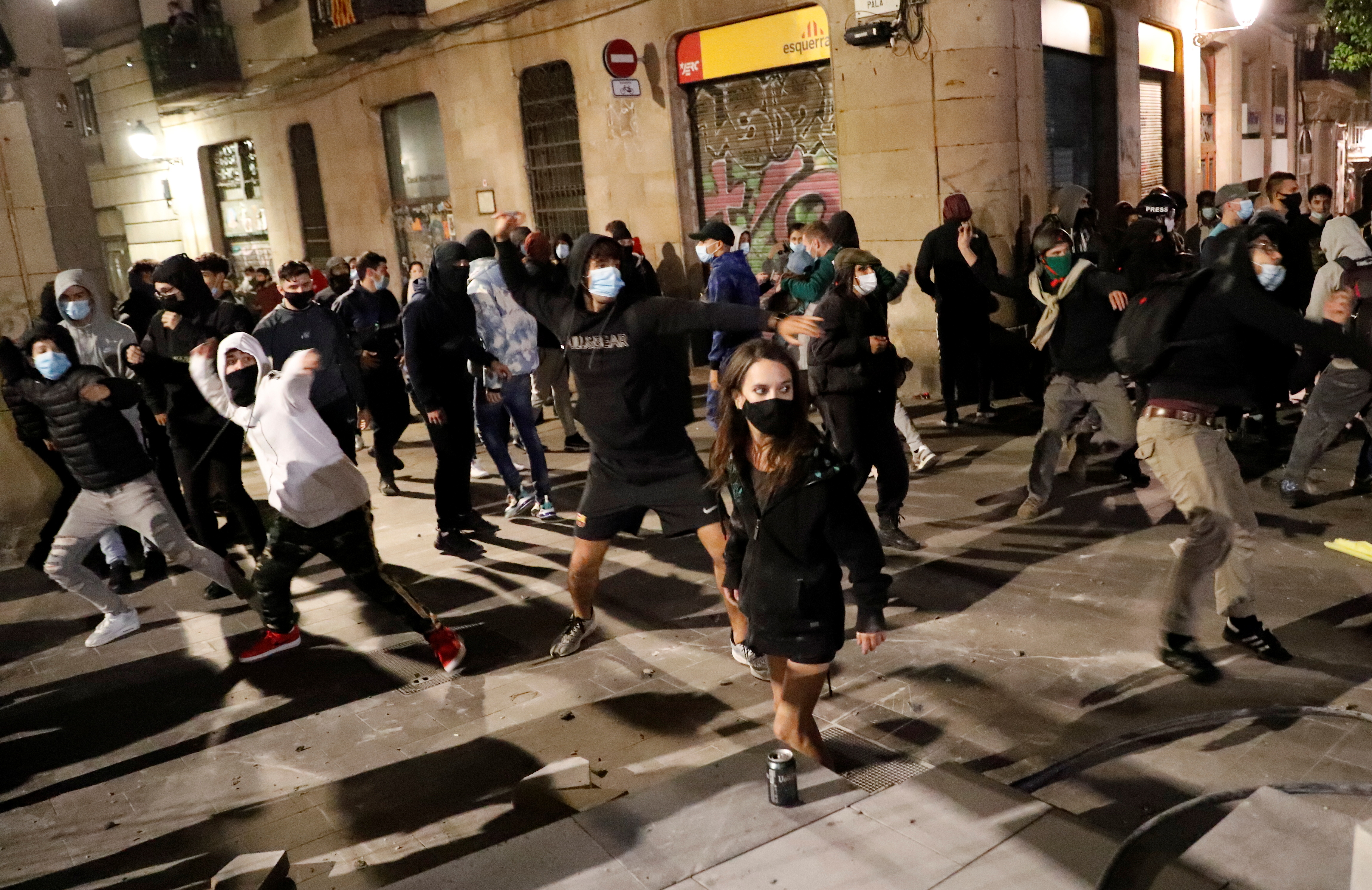 Disturbances have happened in the cities of Burgos, Vitoria, Santander, Valencia and Zaragoza Credit: Reuters

But fed-up funeral home staff went on strike on the Day of the Dead - also known as All Saints Day or All Souls’ Day yesterday.

Some homes are calling for an extra 15-20 more employees, reports the BBC.

Unions have insisted more staff are needed to cope with the deluge of bodies, especially after distressing scenes during Spain's horrific first wave.

Back in March, ice rinks were turned into makeshift morgues in Madrid as funeral services failed to keep pace with spiralling Covid deaths.

At one stage the situation was so bad that municipal funeral homes shut because staff weren't given enough protective gear and masks.

The Ice Palace was hastily converted into the capital's "great morgue", reported The Olive Press.

Burials were delayed for up to a week, while cremations were transferred to cities hundreds of miles away, because of excess demand.

In late March there was widespread horror at reports of the military finding old people abandoned to die alone in care homes filled with bodies after staff fled.

Stunned soldiers sent in to disinfect the properties discovered sick elderly residents living with the bodies of those killed by the killer bug. 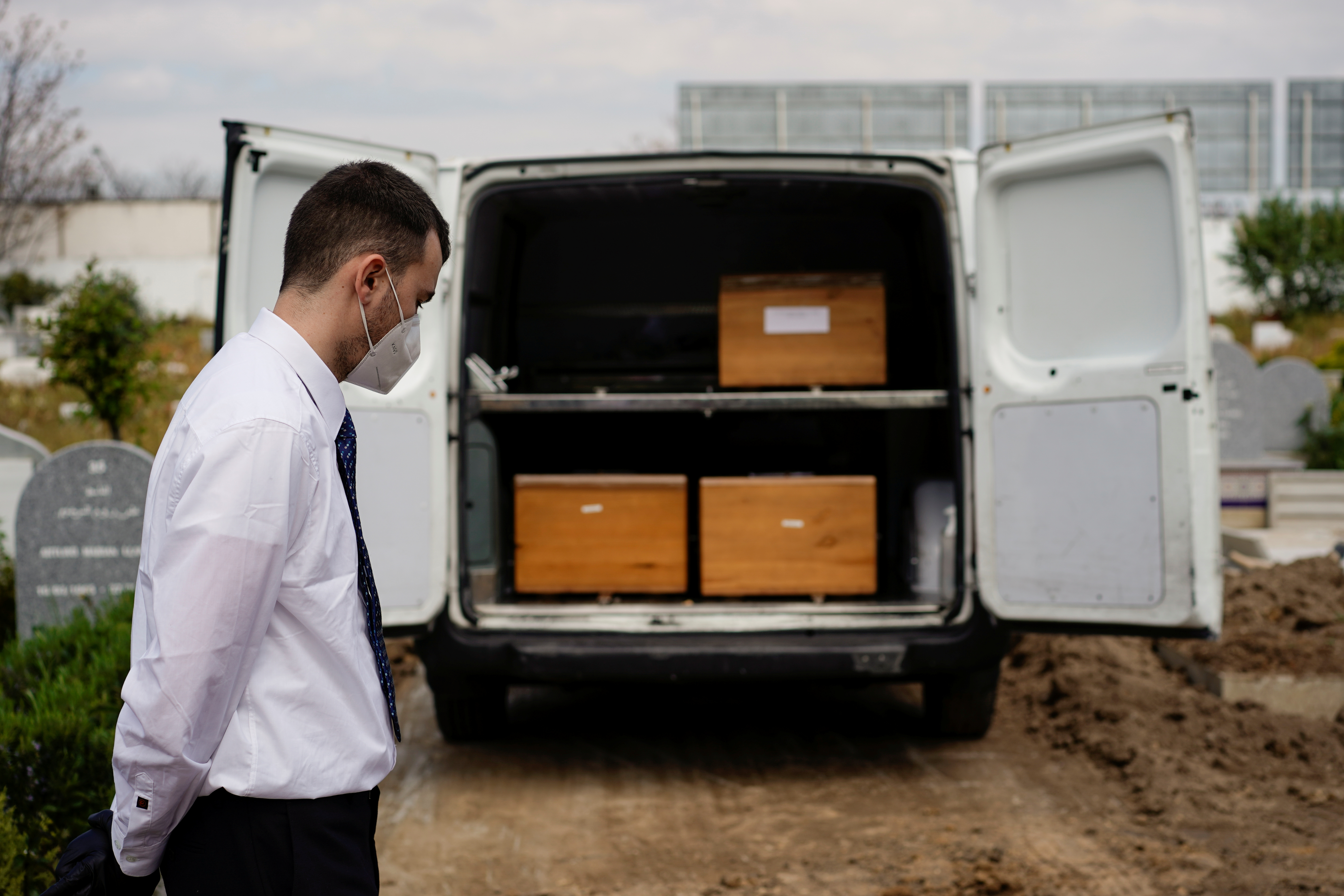 A funeral van with three coffins of people who died of coronavirus Credit: Reuters 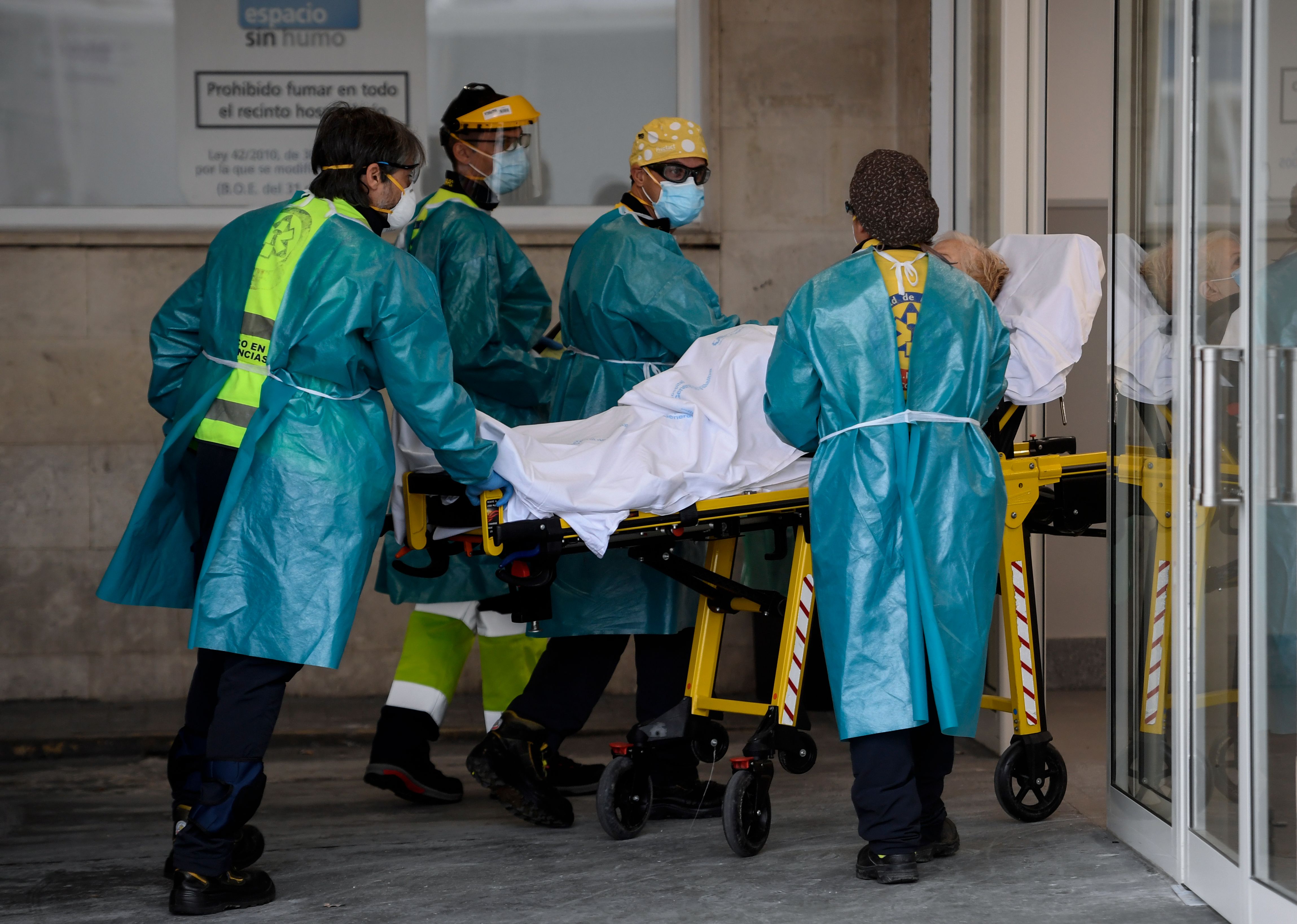 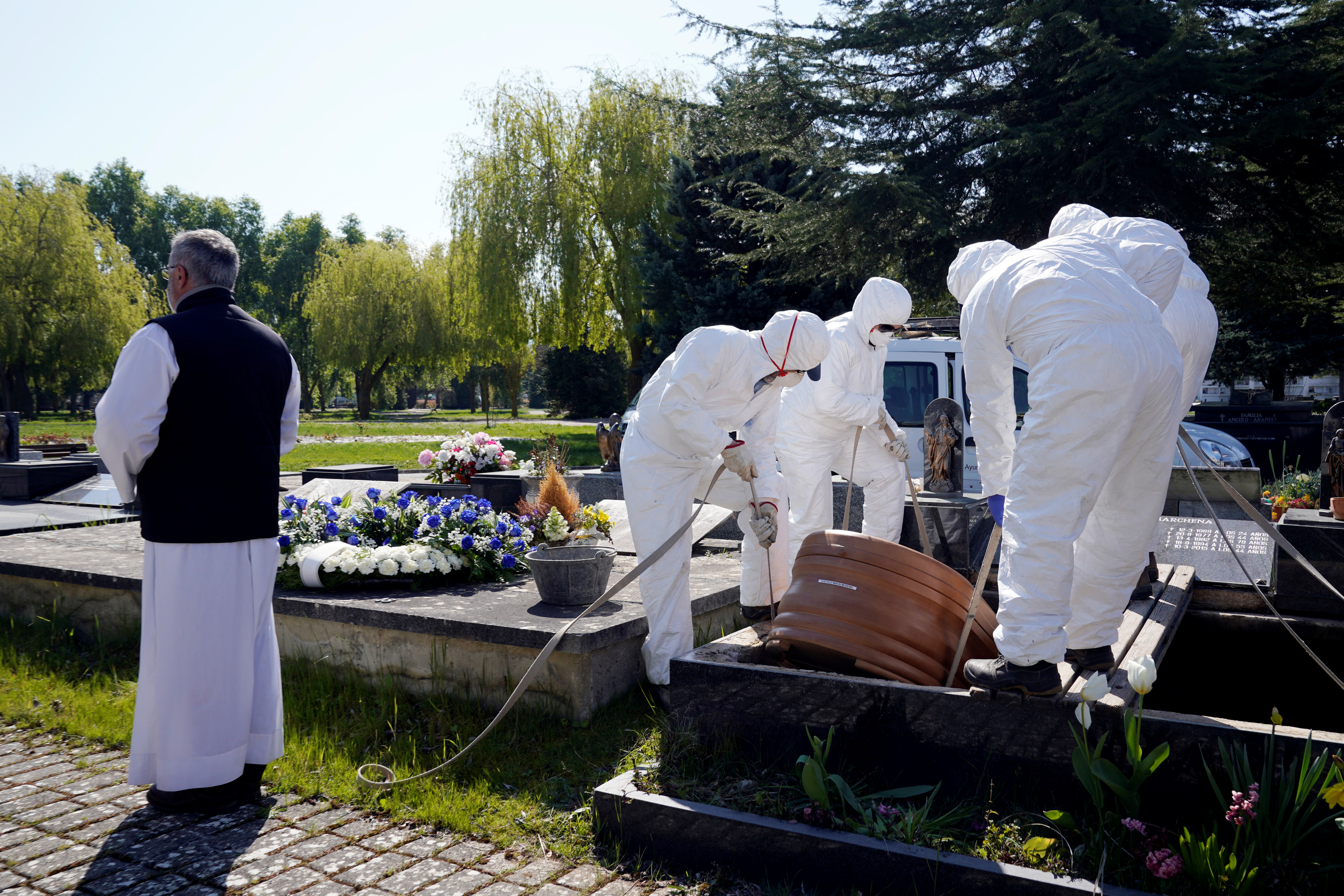 Spain, one of the hardest-hit countries by Covid-19, last week imposed a state of emergency until early May.

This gives regions legal backing to decide curfews and restrict travel to try and halt the rise of coronavirus infections.

El Pais reported that the percentage of hospital beds occupied by Covid-19 patients and those in intensive care units (ICUs) are at record highs, with 14.73 per cent and 26.59 per cent, respectively.

Coronavirus cases are only falling in the Canary Islands, Madrid and Melilla, it adds.

In the Canaries, for example, the 14-day cumulative number of infections per 100,000 residents is about 75.

However, authorities are finding it difficult to quell resistance to the new lockdown rules.

Cops raided a brothel in the autonomous community of La Rioja four times in eight days last month for violating health rules. The owner could be fined nearly 100,000 euros (£90,106).

They said a pornographer arranged the event by making an open casting call with a pamphlet titled “Public Health Crime.”

The weekend before Spain’s curfew took effect, police in Madrid also busted over 300 parties that violated a prohibition on get-togethers of more than six people.

Madrid officials say 30 per cent of the country’s new confirmed infections are in people ages 15-29 and that 80 per cent of all known cases happen in groups of family members or friends.

“The party you go to today can become the funeral of your father or grandfather in seven days or less,” he said. 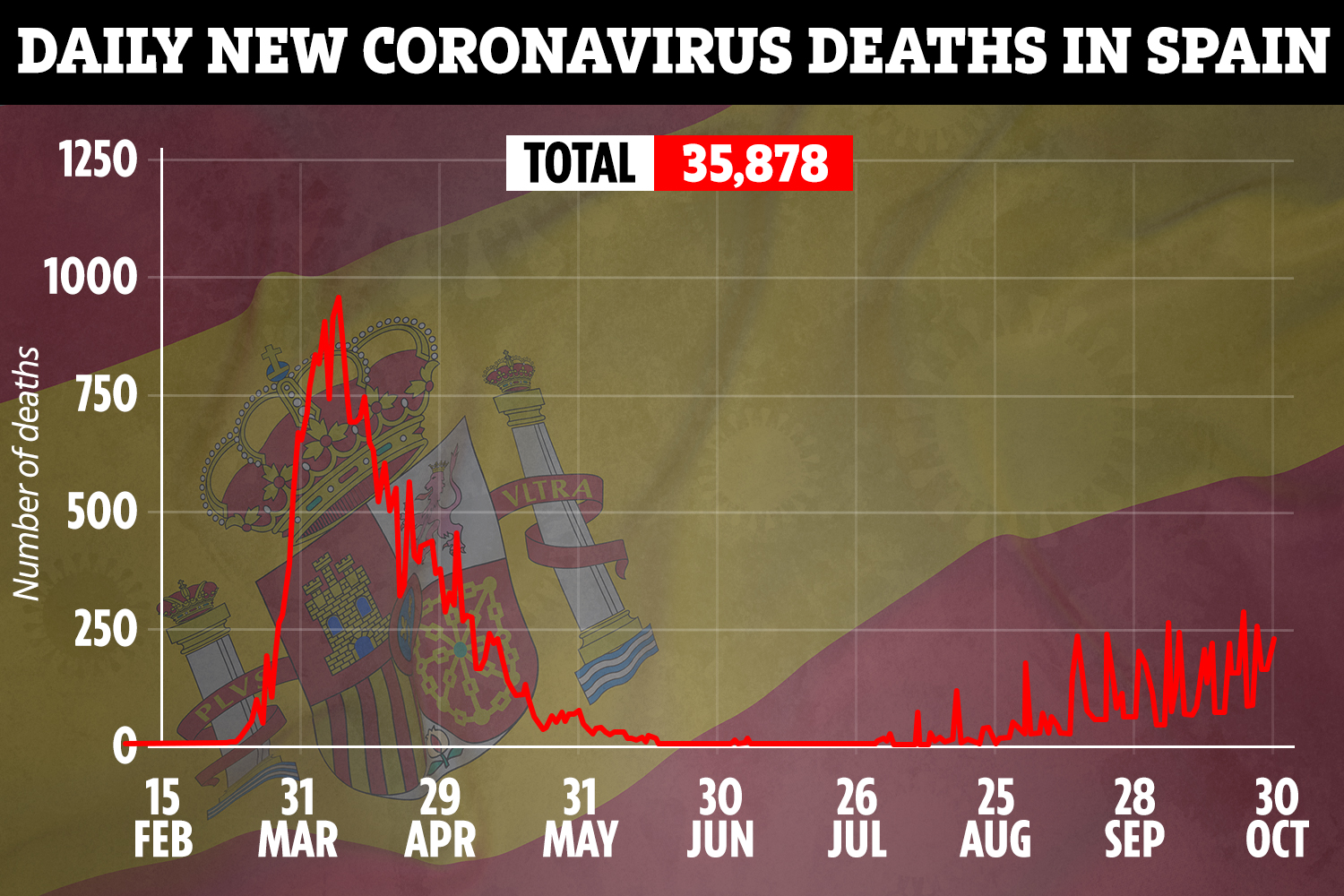 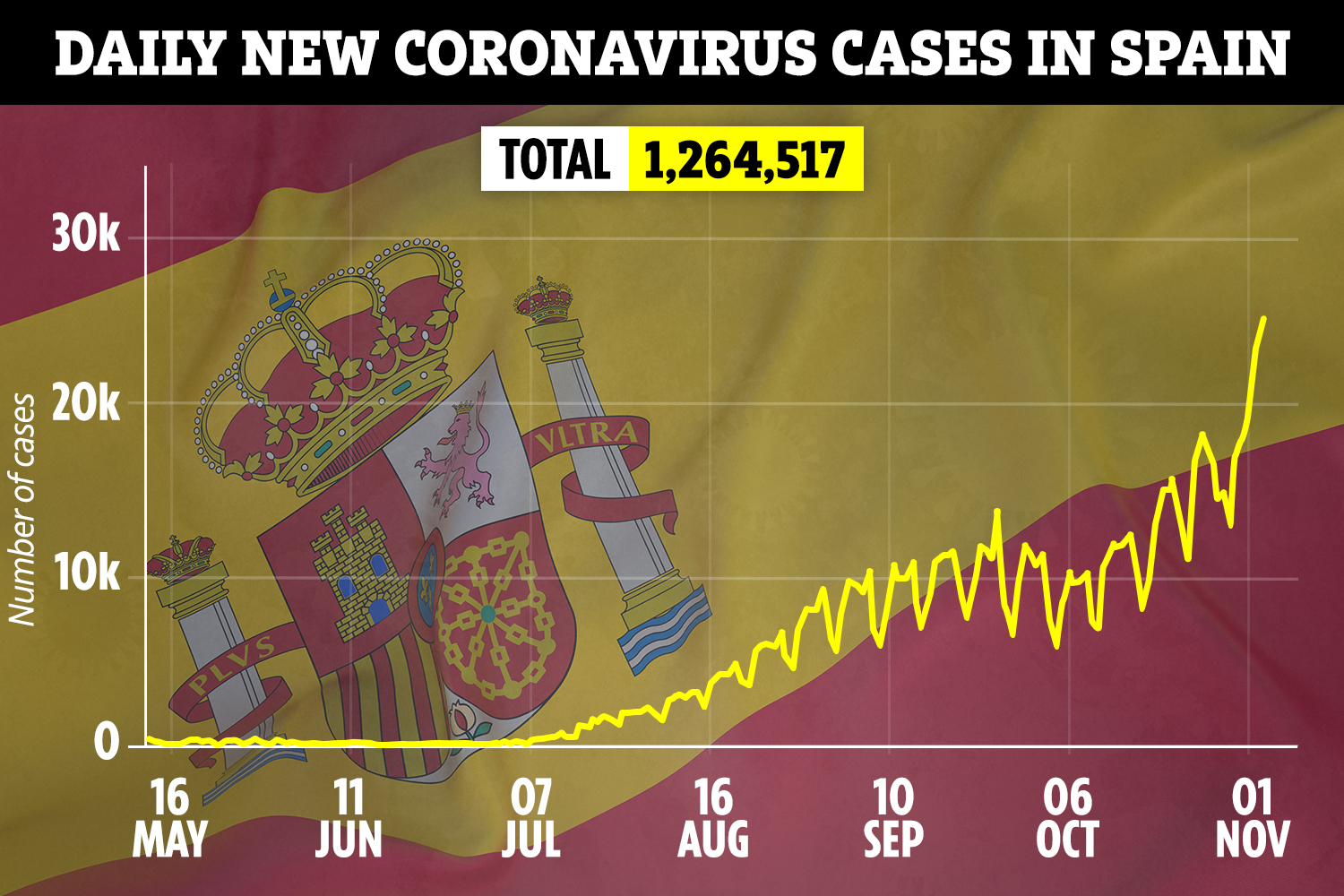 Spain has resorted to increasingly drastic measures to curb infections - and residents are fed upCredit: EPA