DAILY coronavirus cases are starting to fall - as the UK has passed the second peak and the R rate is at 1, new figures suggest.

There were an average of 42,049 new symptomatic Covid-19 infections every day over the two weeks to November 1, according to app data.

There were an average of 42,049 new daily symptomatic Covid-19 infections up to November 1 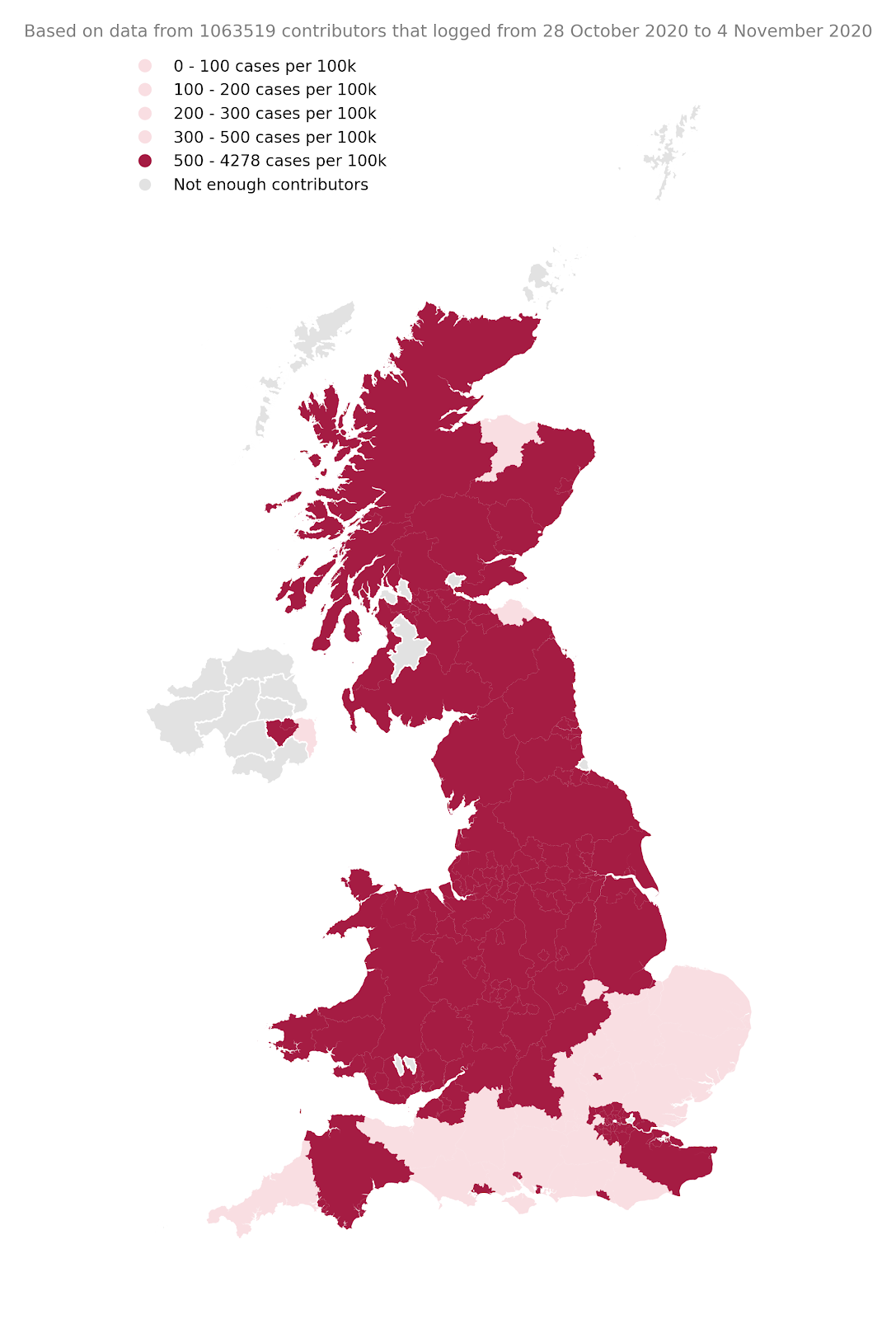 This heat map shows where Covid cases are highest per 100,000 people based on the app data

This compares to 43,569 daily cases a week ago, researchers from King's College London, who run the ZOE Covid Symptom Study app, said.

They also believe that the UK's crucial R rate has now dropped to 1, down from 1.1 last week and could be 0.9 in Scotland.

Researchers said infections nationally have stopped increasing in most age groups, apart from small increases in the those over 60.

Professor Tim Spector, who is leading the study, said cases are moving in the right direction, but urged people to follow restrictions.

“Although the number of new symptomatic cases are still high at over 40,000 daily, over the past week cases are heading in the right direction," he said.

"The worst affected areas have shown the most improvement, but large differences between regions remain.

Over the past week cases are heading in the right direction

"So, while these population changes will take a while to work through, we believe they are a positive sign that we have passed the peak of this second wave.

"We urge everyone to respect the restrictions and help get the number of cases down as soon as possible to help the NHS, end the lockdown and get us in good shape for December.” 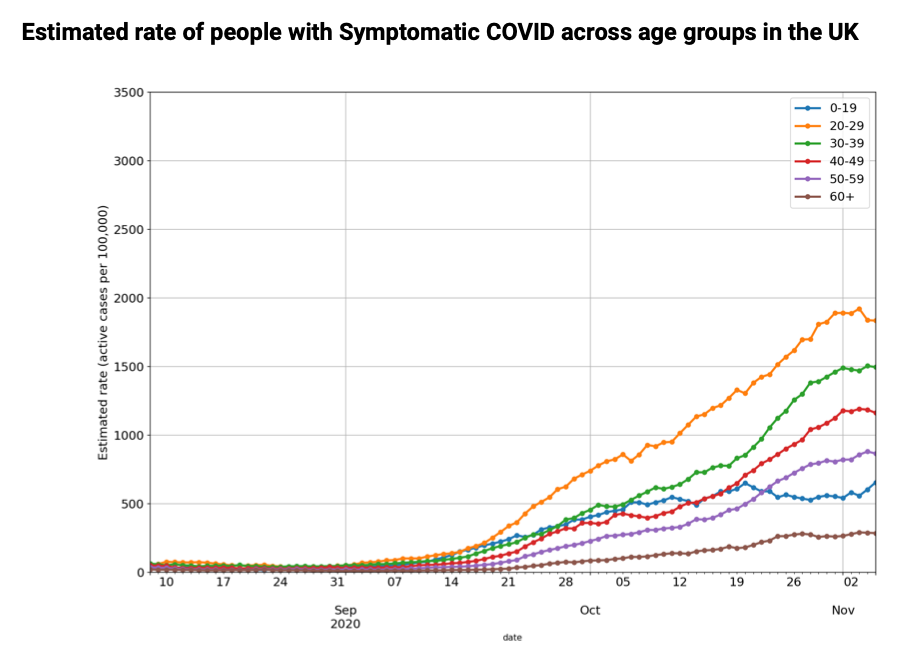 Figures are based on around a million weekly reporters and the proportion of newly symptomatic users who have positive swab tests.

The latest survey figures were based on the data from 13,108 recent swab tests done between October 18 to November 1.

The professor of genetic epidemiology at King's offered hope when published some of this week's mid-week results on Twitter.

But he warned that while it appeared UK had already passed its second peak of coronavirus cases, this wouldn't be reflected in the death figures until after lockdown.

Due to the incubation period of the virus, it can take up to two weeks for symptoms to show, so there is typically a similar time delay on hospital admissions.

There tends to be another two week lag on top of this when it comes to the number of people who have died from Covid.

This means it could be the end of lockdown before there is any drop in the death statistics, according to Prof Spector.

New figures from Public Health England published yesterday showed that Covid cases in England have fallen slightly in those aged between five and 39.

However they are rising for all age groups aged 40 and over, according to PHE's latest weekly surveillance report.

Rates are falling among younger age groups, though the highest rate of any age group continues to be for 20 to 29-year-olds, which stood at 333.6 in the week to November 1, down from 356.4.

In contrast, official figures show that Covid-19 cases are continuing to rise.

Government scientists now believe at least 50,000 new cases of Covid-19 are occurring in England daily, and deaths could reach 500 per day within weeks.

Meanwhile, the country's largest infection survey found cases are continuing to rise in all regions and across all age groups.

Cases are now doubling every nine days nationwide, with 96,000 new cases every day, according to the REACT-1 study.

Whitty and Vallance have become infected with Covid hysteria

The latest PHE report also shows that rising cases are continuing to have a knock-on effect with hospital and critical care admissions increasing.

On Thursday, the NHS moved to its highest alert level in response to the "serious situation ahead", according to NHS boss Sir Simon Stevens.

He said hospitals are filling up with "desperately sick" Covid patients and that the country is close to seeing a situation worse than the first peak.