SOCIAL media users fumed over a video that shows a woman revealing how she convinced her terminally ill conservative father to vote for Joe Biden in his final days.

The video, which was uploaded on TikTok by @Erleepen, explains how the woman’s 55-year-old conservative father had never voted for a Democrat in his life. 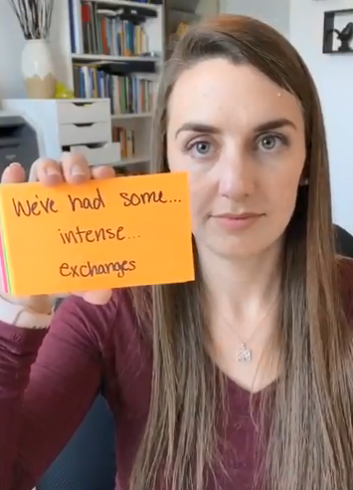 The woman in the video explains how she and her dying father had some 'intense exchanges' over his plan to vote for Donald TrumpCredit: Tik Tok

She revealed they had clashed in "intense exchanges" over his decision to vote to Trump - while he was dying of aplastic anemia.

“We’ve had some intense exchanges about him voting for Trump this year, which has been painful, since we’ll almost certainly lose him in the next few weeks/months,” the note cards go on to say.

“He has six daughters who love him dearly. Yesterday, he was so excited to tell me he’d just voted for BIDEN/HARRIS 2020!!!!

“Because ‘it matters to my girls and my girls matter to me.’ Vote for the guy who respects women! If my VERY Republican dad can… SO. CAN. YOU.”

The tweet has generated a widespread of backlash online – as many social media users believe the woman manipulated her father and noted the lack of awareness of choosing to argue politics during her father's last moments. 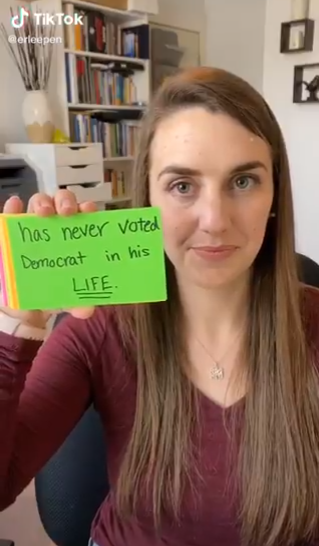 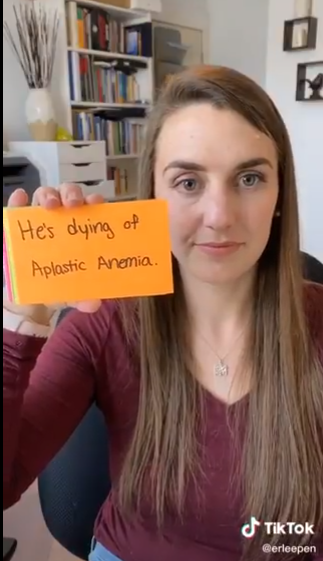 One critic replied to the video on Twitter saying, “My dad died in my arms. The last thing on my mind was politics, and yes, it was an election year. The only thing I wanted was more time with him. I can’t imagine being this shallow and selfish.”

Another user voiced their unfavorable opinion saying, “Her father is on his deathbed, and she’s more concerned about him voting. How selfish of her.”

Someone else tweeted, “Imagine being the sort of person who spends their last moments with their father arguing about politics? This poor man.”

The conservative account, Reagan Battalion, flipped the script and questioned if the outcome would be the same if the woman was a Donald Trump supporter and questioned her father about his plans to vote for Biden.

“Sad and sick. And would say the same if she were a Trump supporter badgering her dad on his death bed about his plans to vote for Biden. Sick People.”

Users on Twitter exploded at the woman's decision to argue politics with her dying father during his last momentsCredit: Tik Tok

Twitter users blasted the video and the womanCredit: Tik Tok

Another Twitter user said she just wished to have more time with her father before he passed away.

“I wasn’t lucky enough to be able to have conversations with my father when he was dying – he went into a coma quickly, from which he never recovered.

“But if I’d had the opportunity, hectoring him about politics would never even have occurred to me. I’m sorry for all involved here.”

Blaze TV host, Chad Prather accused the woman of manipulating the dying father into his decision.

“Basically you hammered the emotional s*** out of a dying man until he caved. He doesn’t have to live to see the Harris presidency take American down the drain. Hope your kids understand.”

Users also went at the woman for her insistence that Biden is the candidate “who respects women!” and responded with pictures and videos of the Democratic nominee inappropriately touching and kissing women.

As one user responded, “Oh yes, the Bidens clearly respect women,” with an eye rolling gif attached to the tweet.