DONALD Trump held rallies in five states yesterday on a marathon penultimate day of campaign in the US election.

The US President called on daughter Ivanka and aide Hope Hicks for support as he visited Michigan, Iowa, North Carolina, Georgia and Florida. 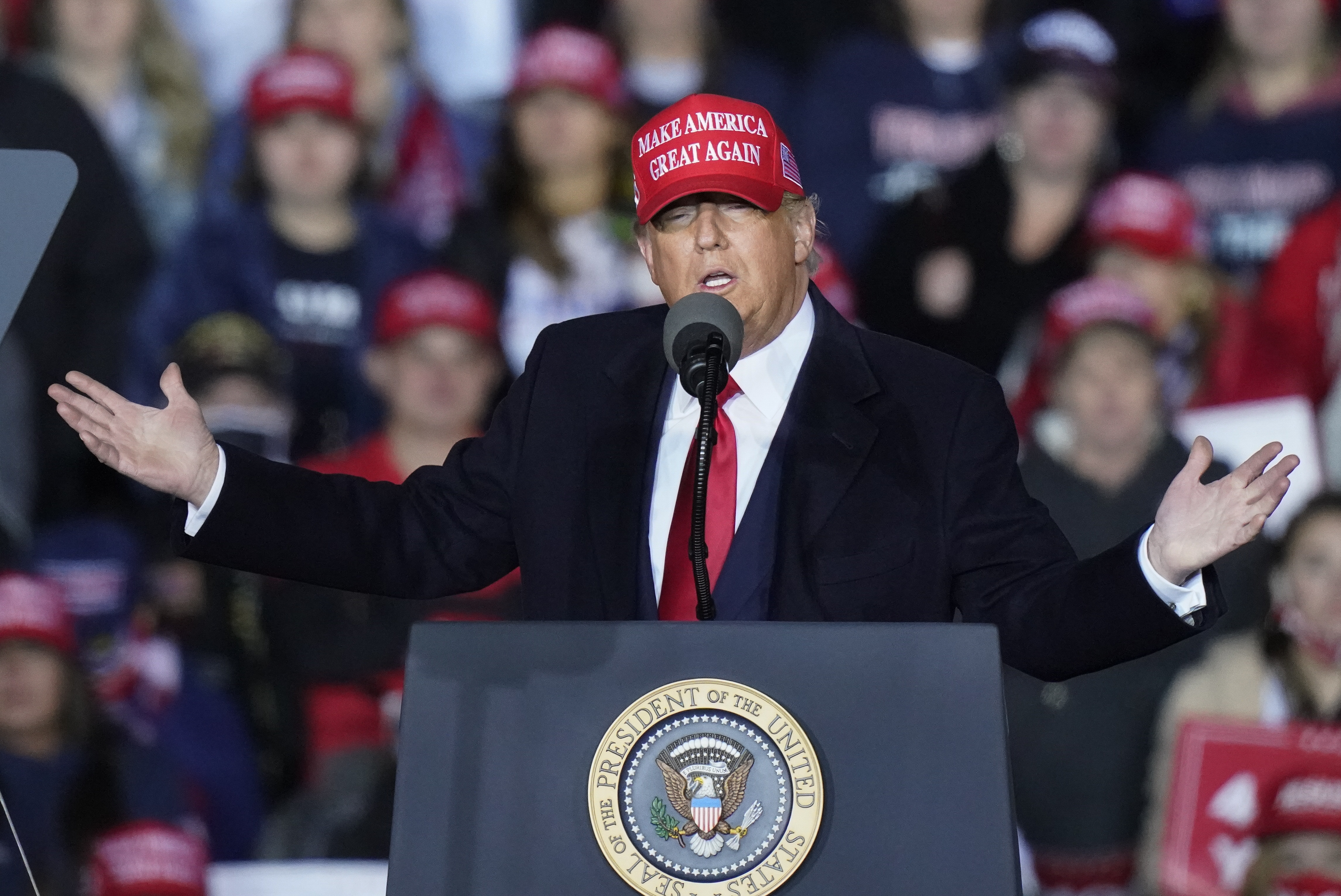 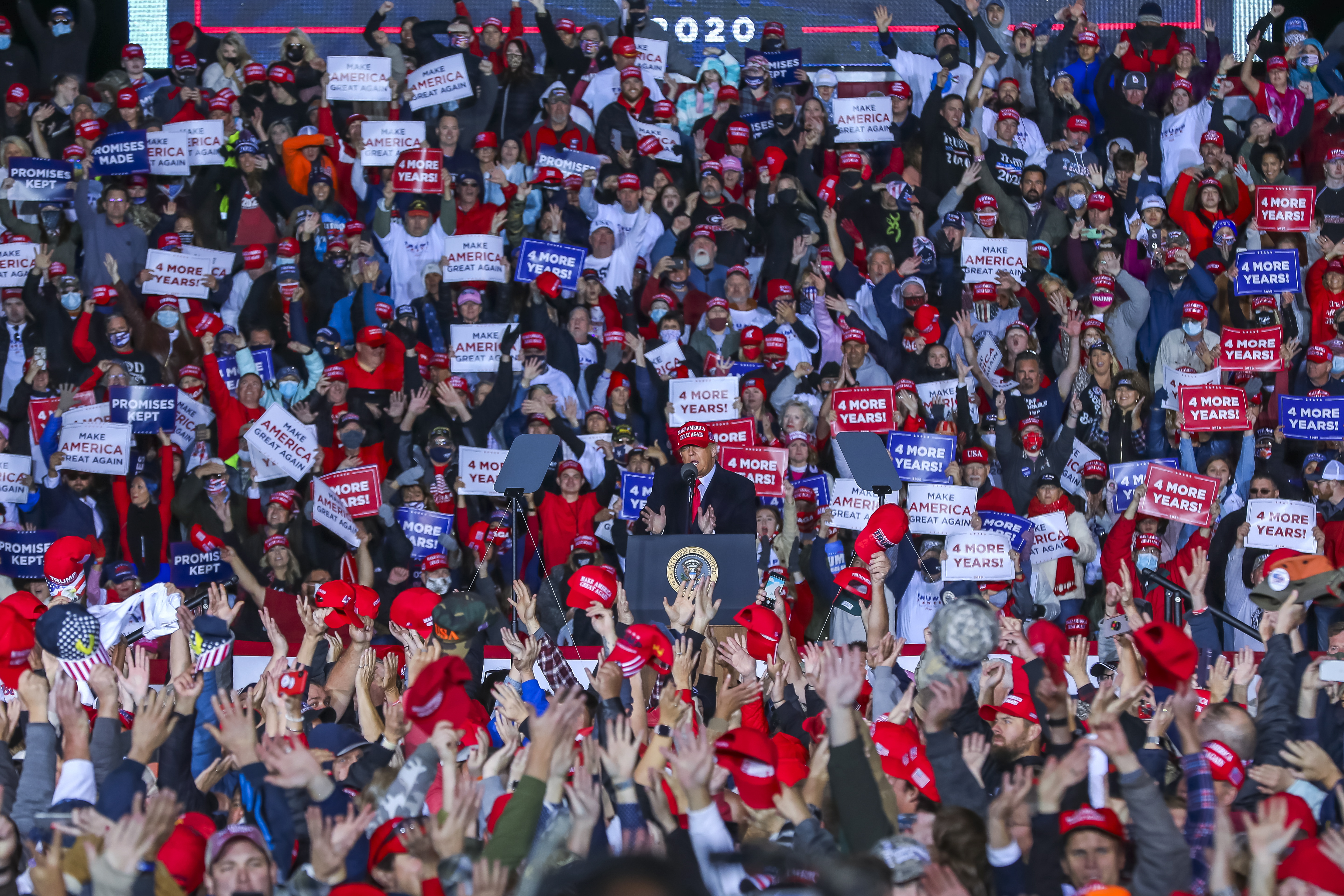 Trump speaks to a large crowd of supporters in GeorgiaCredit: EPA 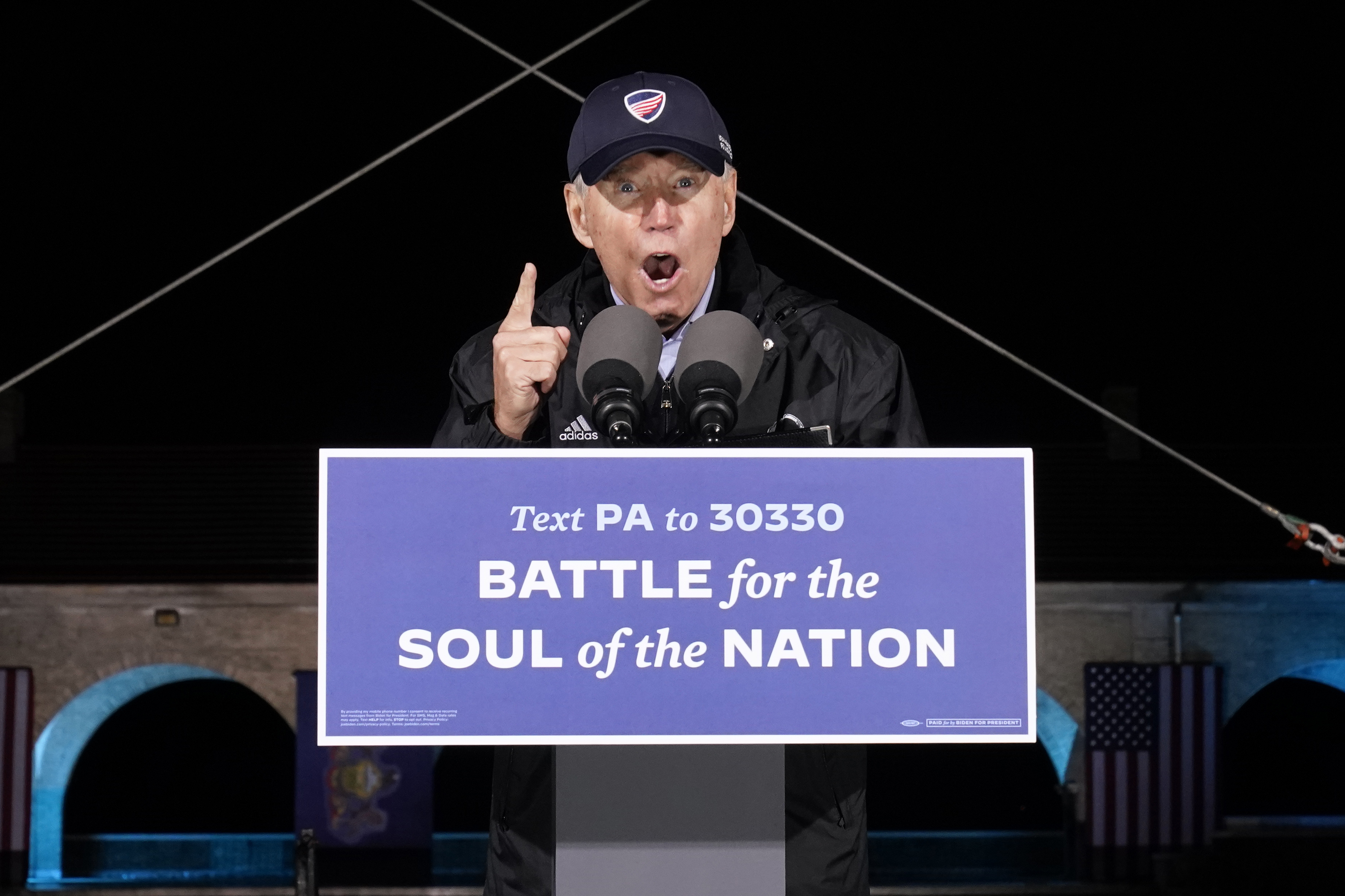 Meanwhile opponent Joe Biden focused his attention on the key battleground state of Pennsylvania - a state he hopes to win from Trump on Tuesday.

Trump started Sunday's marathon in Michigan, where Ivanka introduced her father by comparing him to Winston Churchill.

The president has often compared himself to the British prime minister, especially as the United States faces the coronavirus pandemic.

“Winston Churchill said, 'It was the nation that had the lion's heart, I just had the luck to give it the roar,” Ivanka said.

She added: “How much does this remind you of our president and this movement?' He gave us roar.” 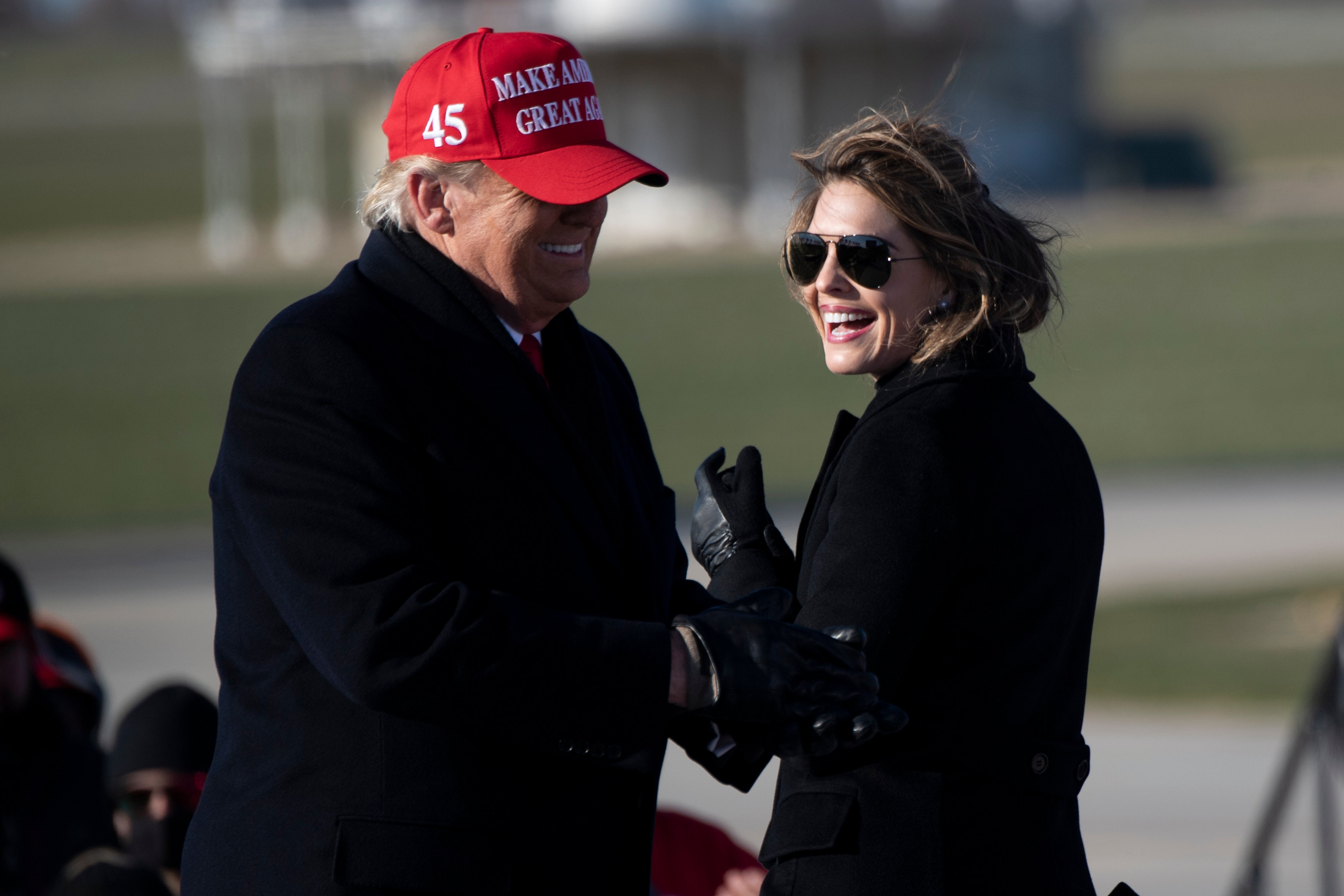 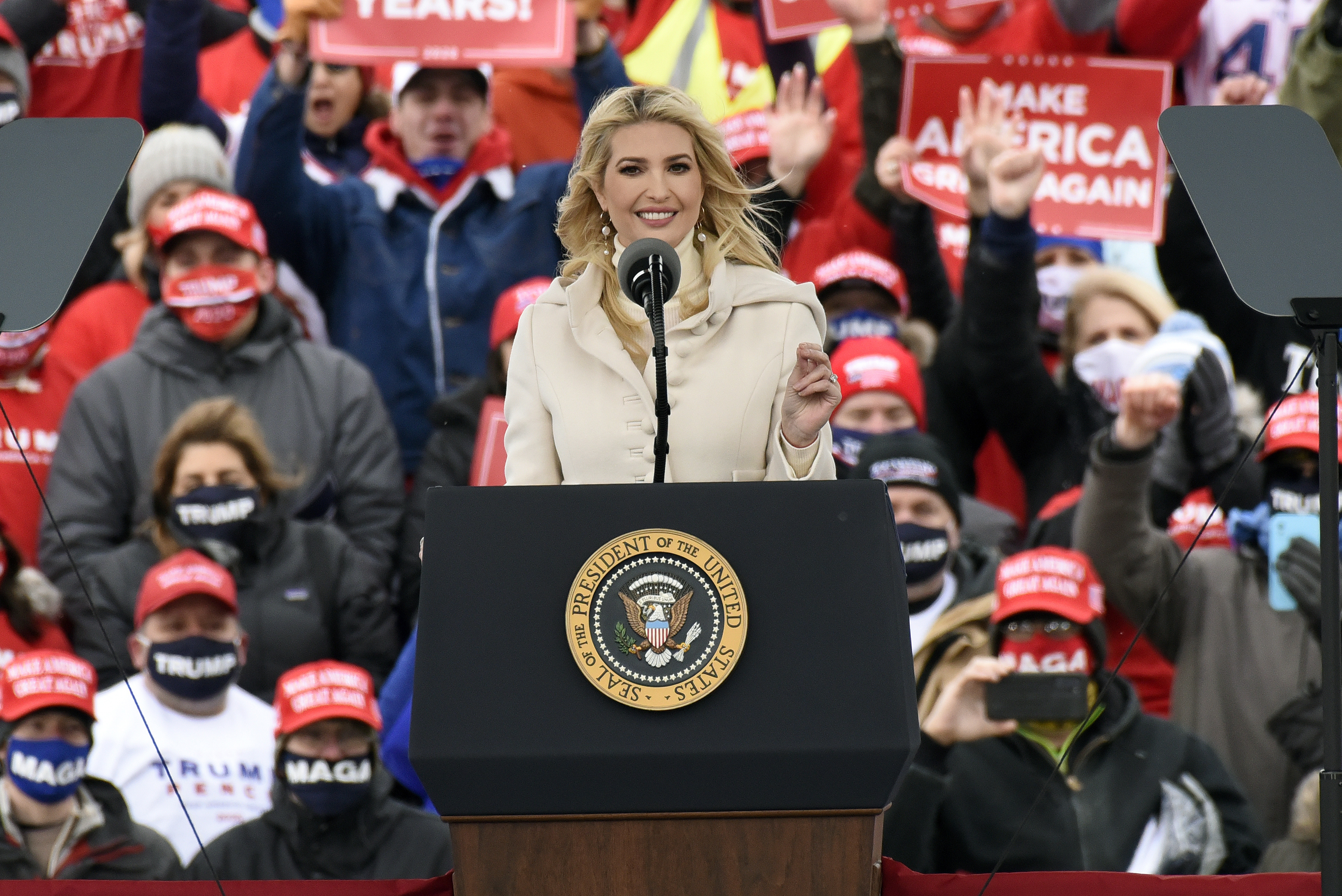 Ivanka Trump introduced her father during a snowy rally in Michigan on SundayCredit: AP:Associated Press 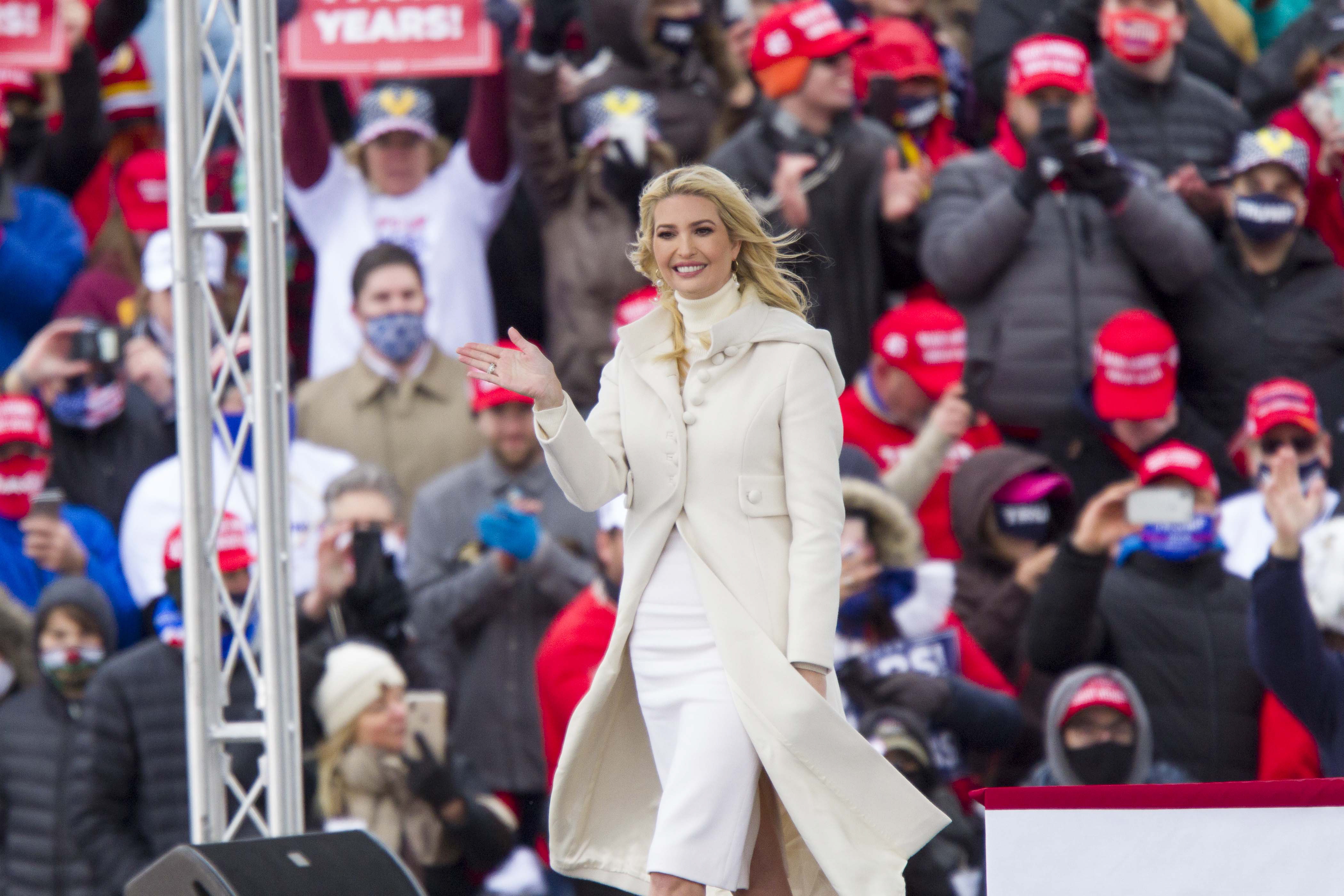 Ivanka Trump waves at supporters after introducing her fatherCredit: EPA

Trump – who went on to campaign in Iowa, North Carolina, Georgia and Florida – joked about the speedy introduction in the cold, snowy weather.

“We had the luck of having Ivanka here and I'll tell you it's the shortest introduction she's ever given me and now I understand why,” Trump said.

The president, who won Michigan in 2016, told supporters that “the economy is now growing at the fastest rate ever recorded" and predicted he would once again claim victory in the state, BBC reported.

Biden, who was in Michigan with Obama on Saturday, leads by more than six points in the state, according to the RealClearPolitics average.

Hicks and Ivanka then joined Trump for a rally in Dubuque, Iowa – where the president promised to secure borders and add more conservative judges to the bench, the BBC reported.

Trump, who spoke for over an hour in Iowa, also claimed his administration has “opened new markets for Iowa farmers and ranchers,” Fox News reported. 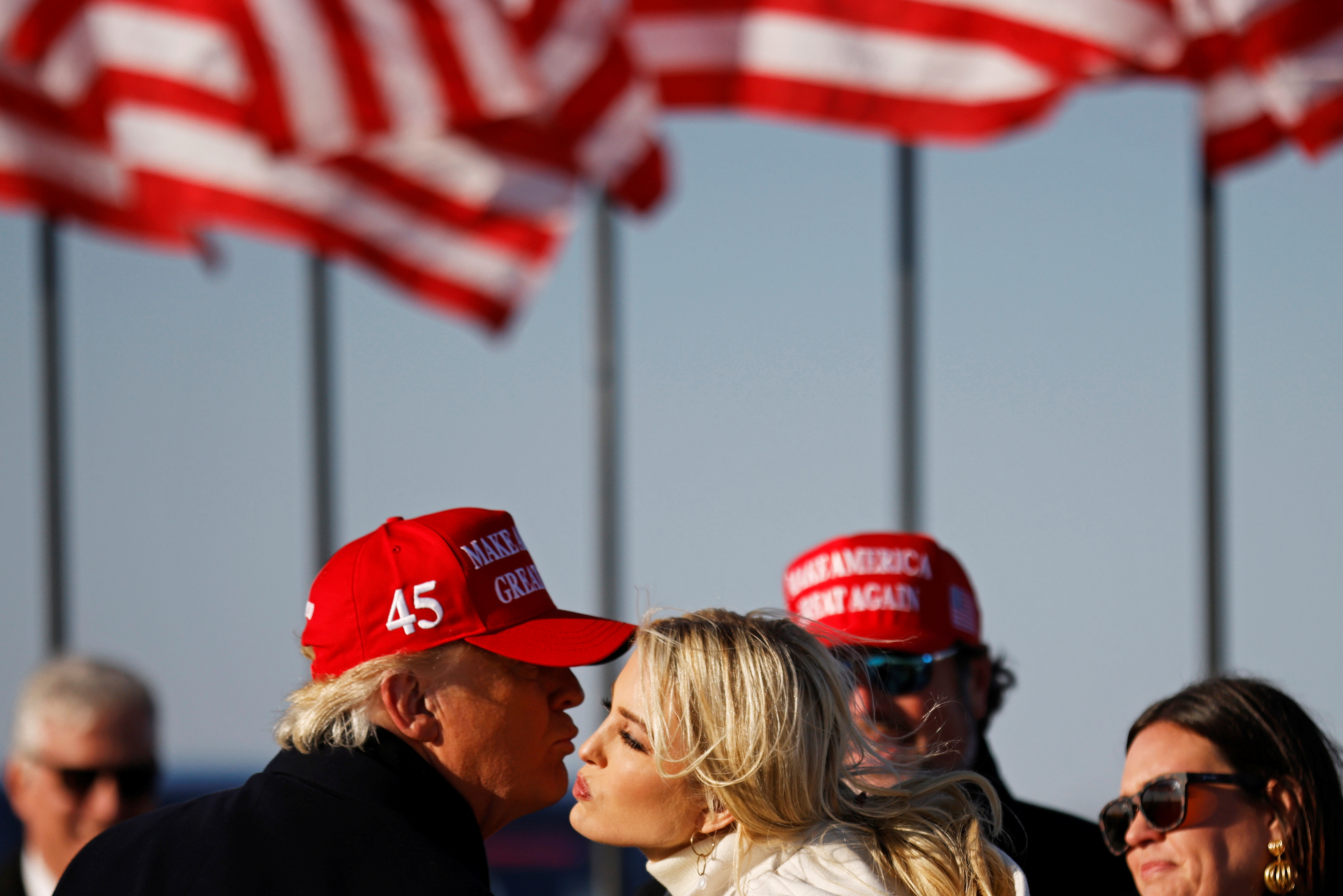 Donald Trump kisses his daughter Ivanka at the end of a campaign rally at Dubuque Regional AirportCredit: Reuters

The president called Ivanka and Hicks, as well as former press secretary Sarah Huckabee Sanders, to address the crowd, the Daily Mail reported.

Hicks, who Trump said does not like public speaking, then spoke to the crowd, the outlet reported.

“Hi, how much do we love our president? Are you guys going to vote on Tuesday?” Hicks said.

Trump also praised Senator Joni Ernst, a vulnerable incumbent on the ballot up for reelection.

Real Clear Politics averages of recent polls show the president with a slight edge over Biden in the Hawkeye State.

In North Carolina, Trump recited the poem “The Snake” in a jab at Biden, claiming the former veep would enact lax immigration policies, The Hill reported. 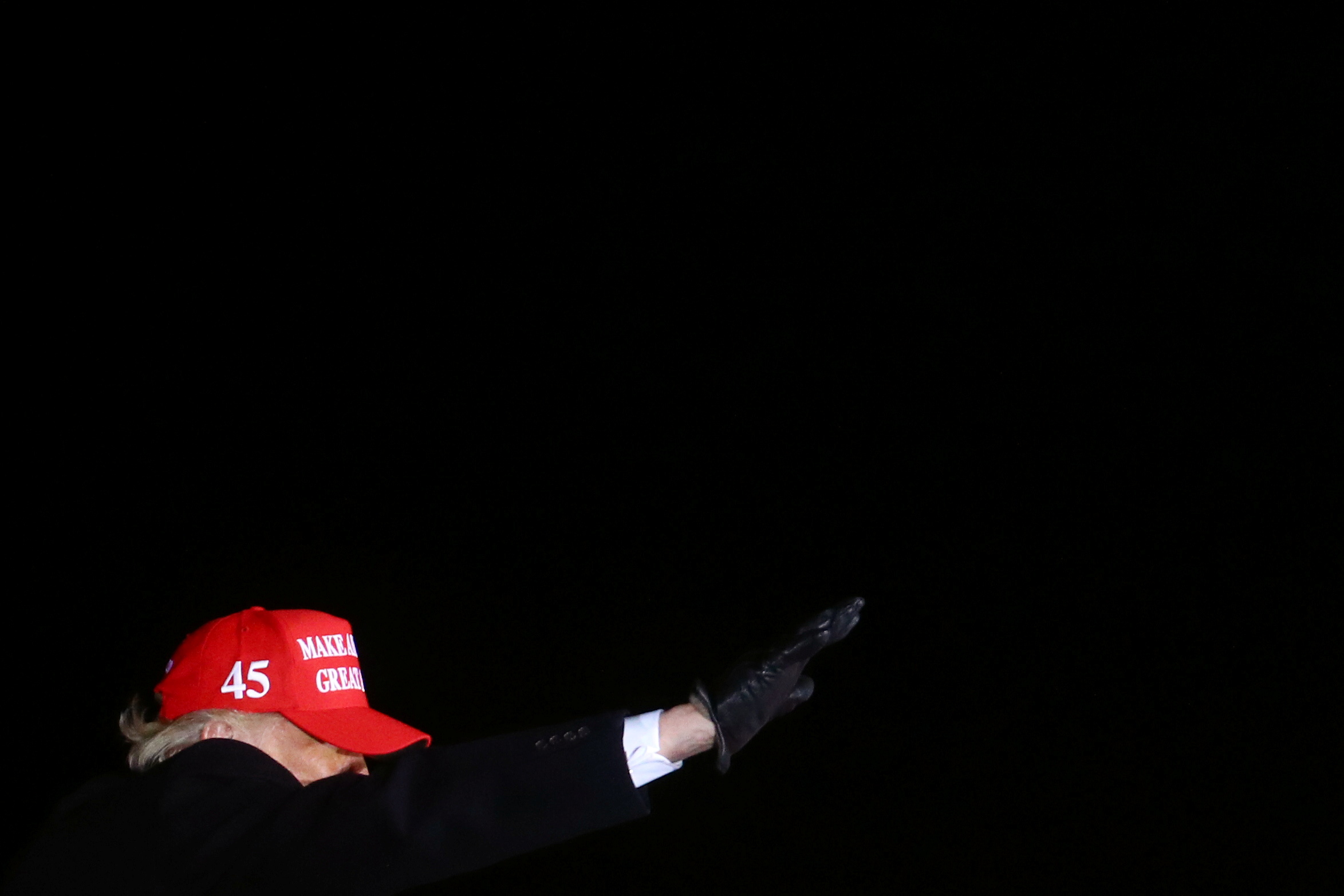 Trump waves to supporters during a campaign rally in North Carolina on SundayCredit: Reuters

The poem, released in 1963 by left-wing activist and songwriter Oscar Brown, tells the story of a woman who naively tries to nurse a frozen snake to health, The Hill reported.

The cautionary poem was a frequent staple of Trump’s campaign in 2016.

In 2017, Brown's daughters told CNN they sent a cease-and-desist letter to the Trump campaign to demand the president stop using their father’s lyrics.

Trump also gave hopeful projections for the coronavirus pandemic, claiming that the U.S. is “rounding the corner” even as COVID-19 cases are spiking in the state, The Hill reported.

“This election is a choice between a Biden depression and a boom like you’ve never seen before,” Trump said.

Biden and Trump are neck-and-neck in a tight race for the Tar Heel State, with the former veep holding a 0.3 percentage point advantage over the president, according to Real Clear Politics.

President Trump then rushed to Georgia -- a state he carried by five percentage points in 2016 but is now considered a battleground state.

Rep. Vernon Jones, a Democrat who has endorsed Trump, addressed the crowd before Trump was scheduled to take the stage and claimed Biden “is a racist,” the Atlanta Journal-Constitution reported. 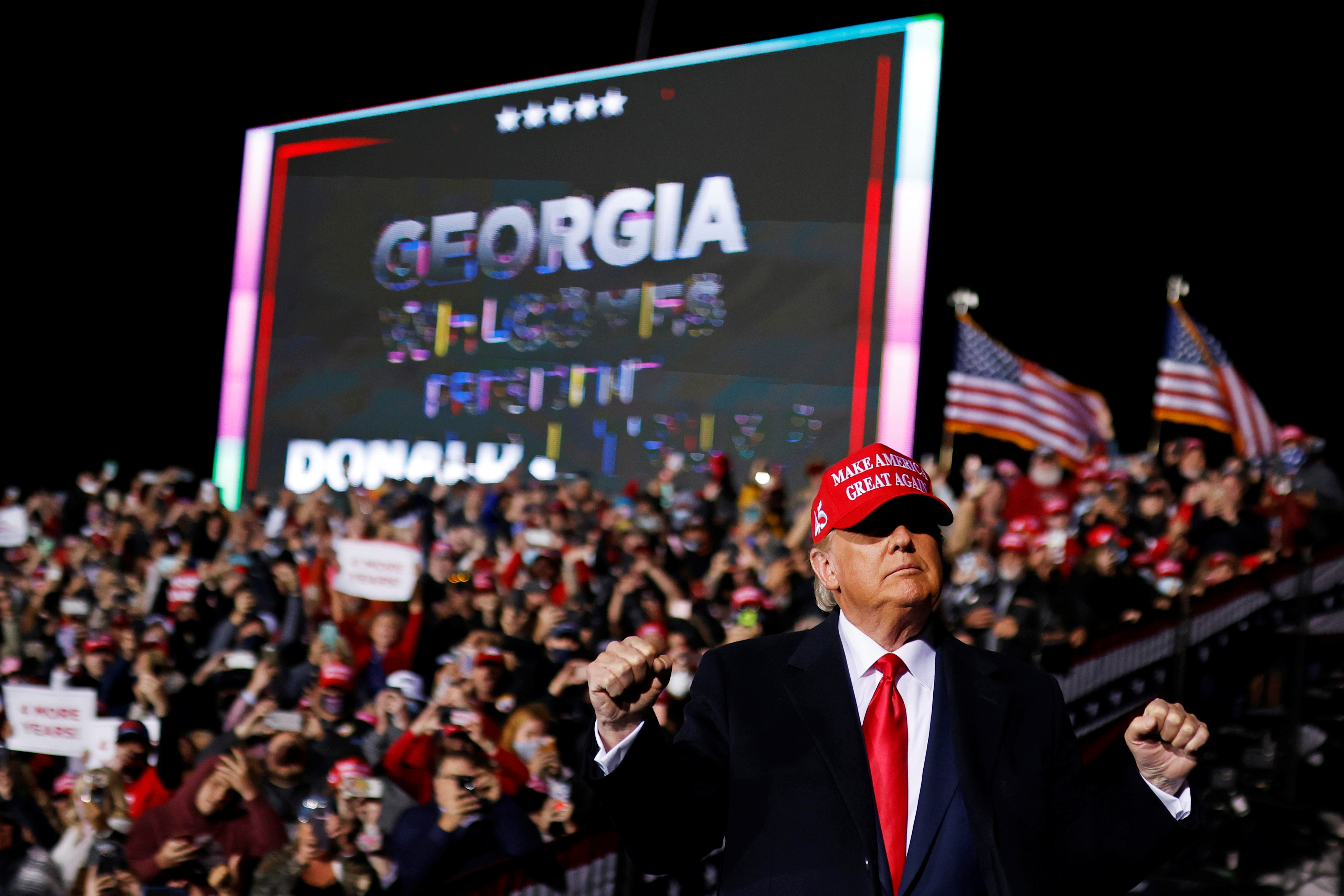 Trump speaks in his fourth rally of the day in GeorgiaCredit: Reuters 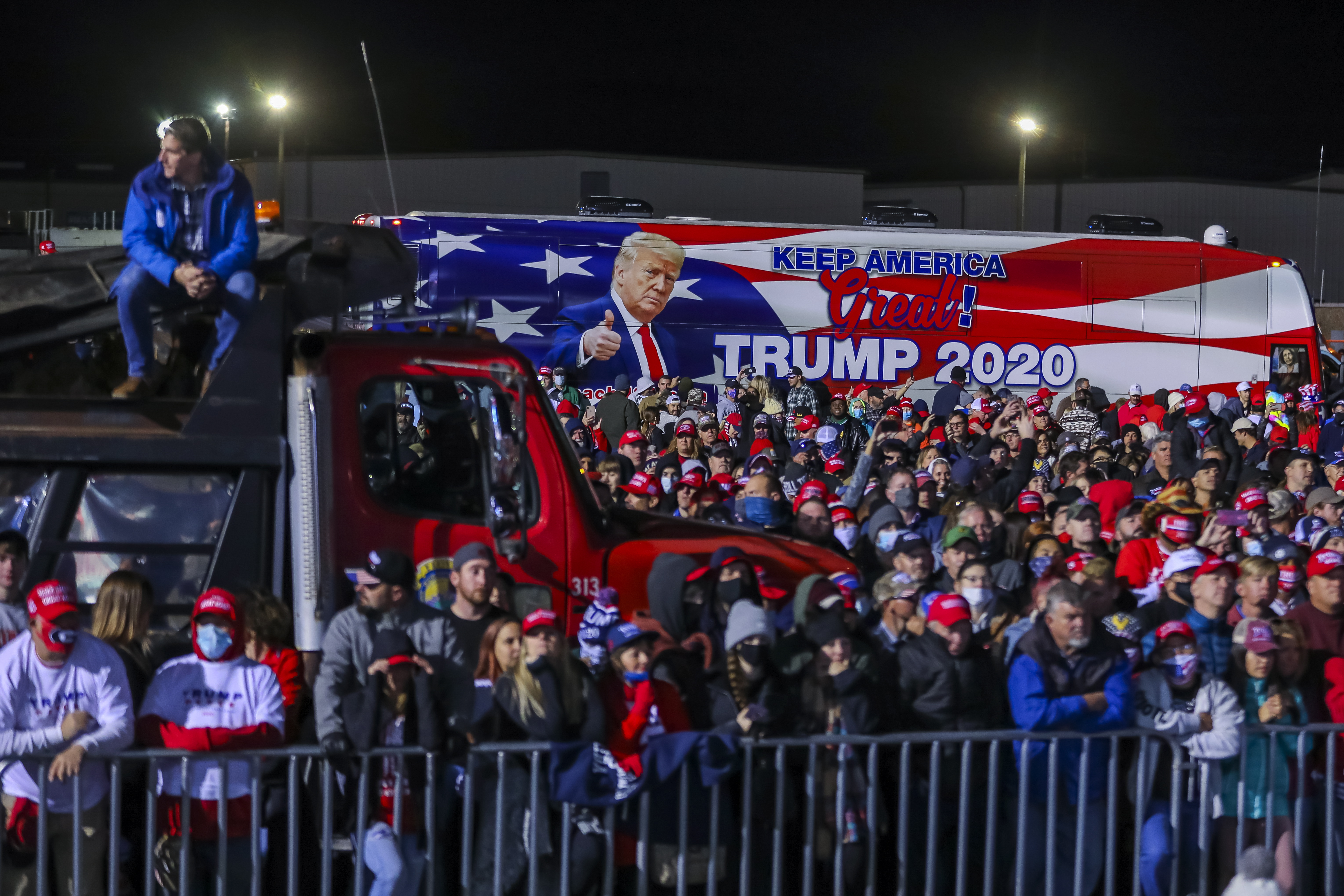 The president recited the poem 'The Snake' while campaigning in GeorgiaCredit: EPA

He added: “Donald Trump has done for African Americans than any president since Abraham Lincoln. I said it.”

The state hasn't backed a Democratic presidential nominee since 1992, but an influx of young, college-educated transplants to the Atlanta metro area are boosting the state’s numbers of Democratic voters.

Sonny Perdue, the state’s former governor and current Secretary of Agriculture, then addressed the crowd with a dig at Alexandria Ocasio-Cortez.

“Would you rather have AOC or ACB?” referring to recently confirmed Supreme Court Associate Justice Amy Coney Barrett,” Perdue said.

Biden has a 0.4-point lead over Trump in the Peach State, according to Real Clear Politics poll averages.

Biden leads Trump by three points in Florida, where Trump is scheduled to speak in Miami after the Georgia rally, The New York Times reported.

The president cast his vote in Florida last Saturday, after switching his primary residence from New York.

It was the first time an incumbent president will cast his vote in The Sunshine State, USA Today noted, which carries 29 electoral votes.

Biden has focused his campaign on a two-day offensive in Pennsylvania in a bid to clinch the state considered the keystone for winning the 2020 election.

The former veep, who spoke at a drive-in rally on Sunday evening, slammed the president for fanning “flames of hate across the nation,” The Hill reported. 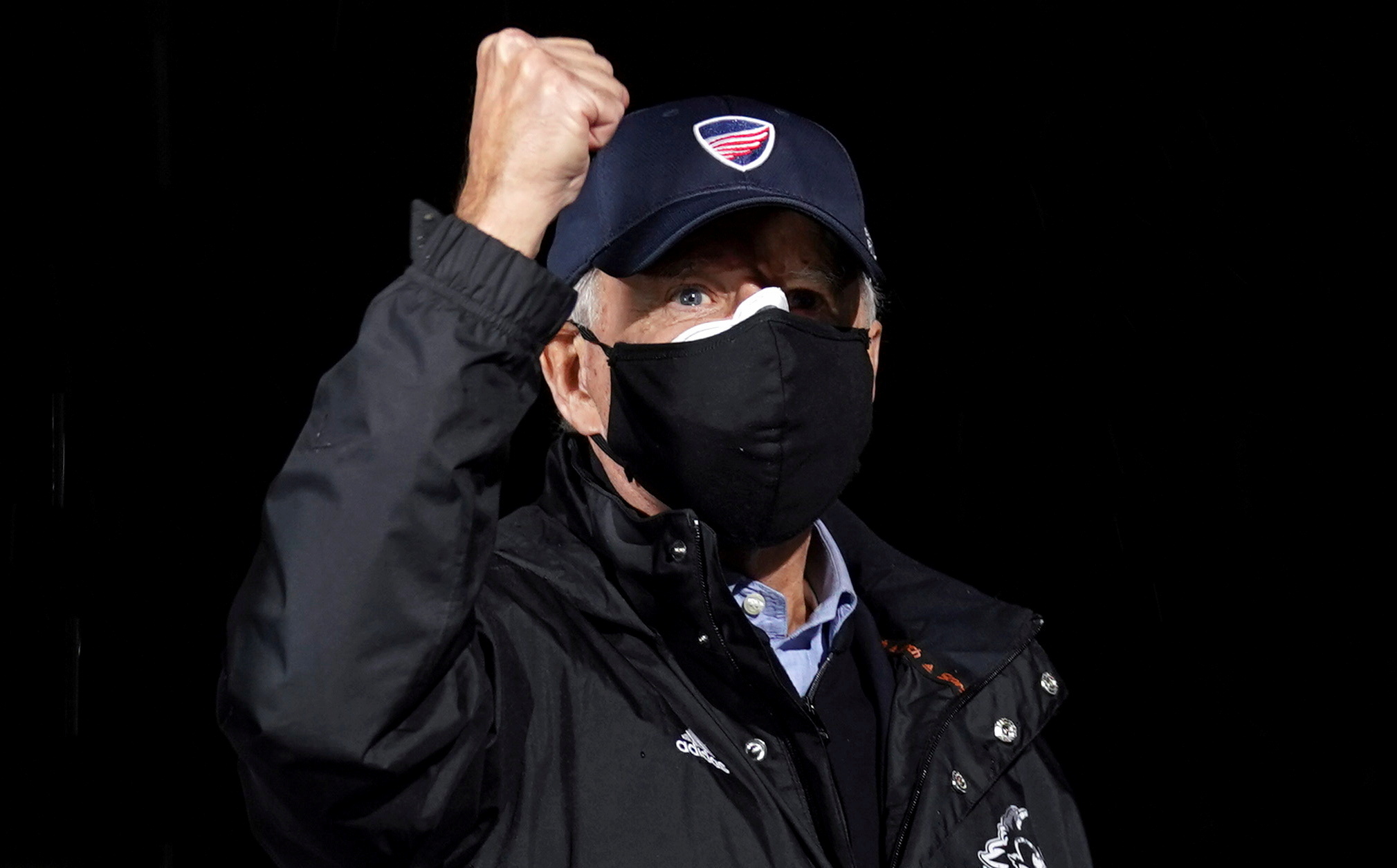 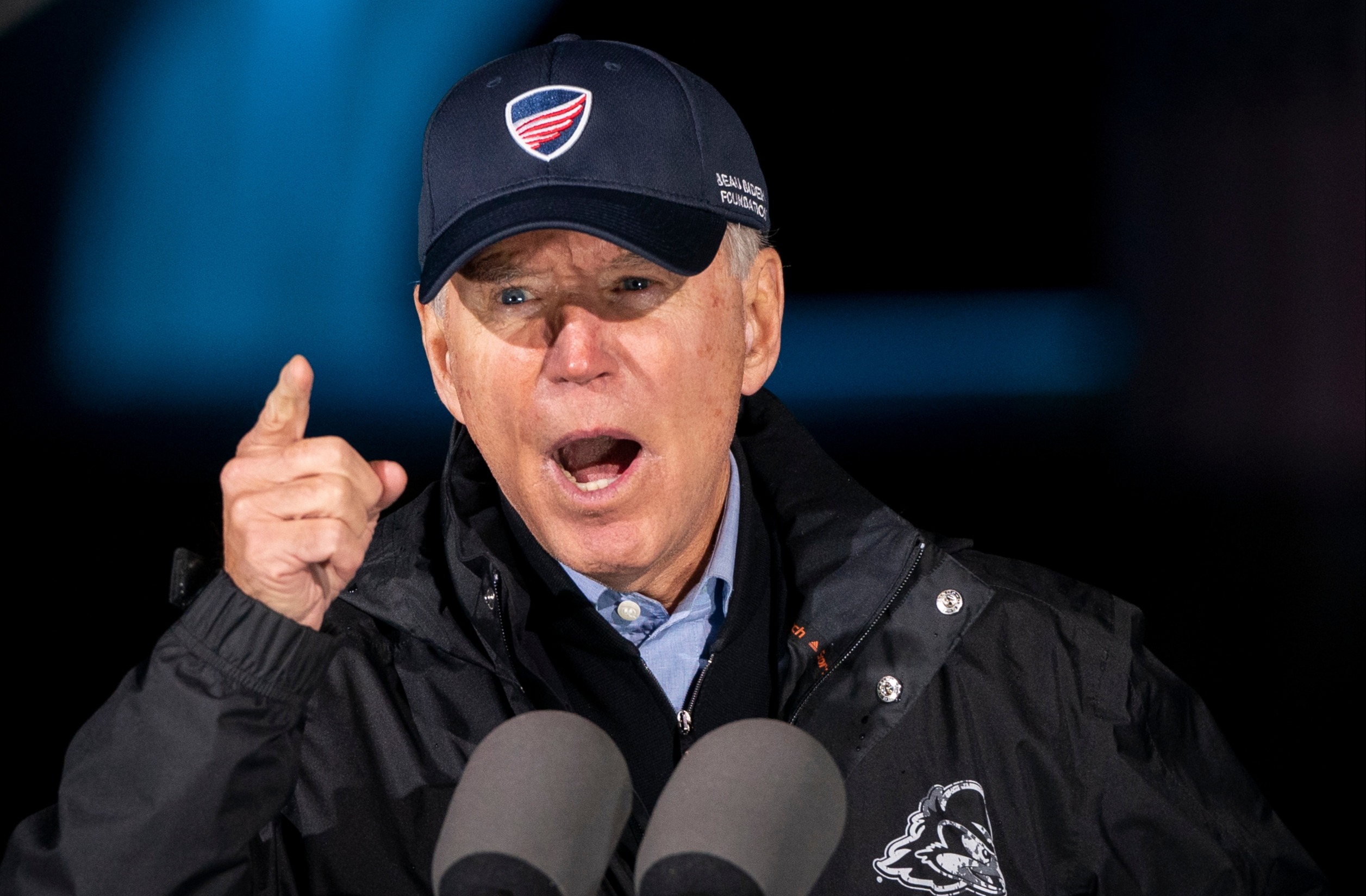 Biden claimed he was wearing an Eagles jacket on Sunday, when reports said it was a Delaware Fighting Blue Hens jacketCredit: Getty Images - Getty 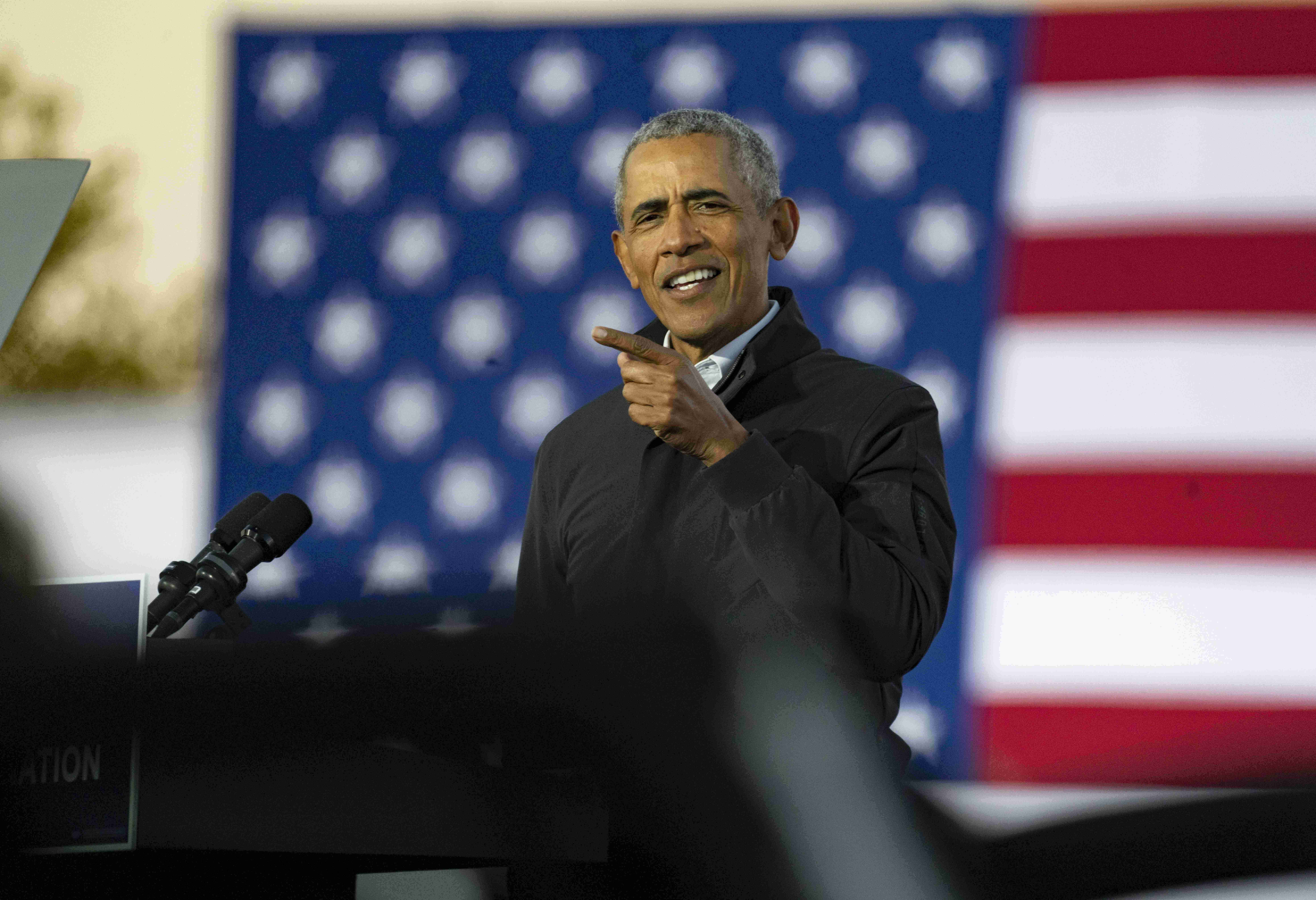 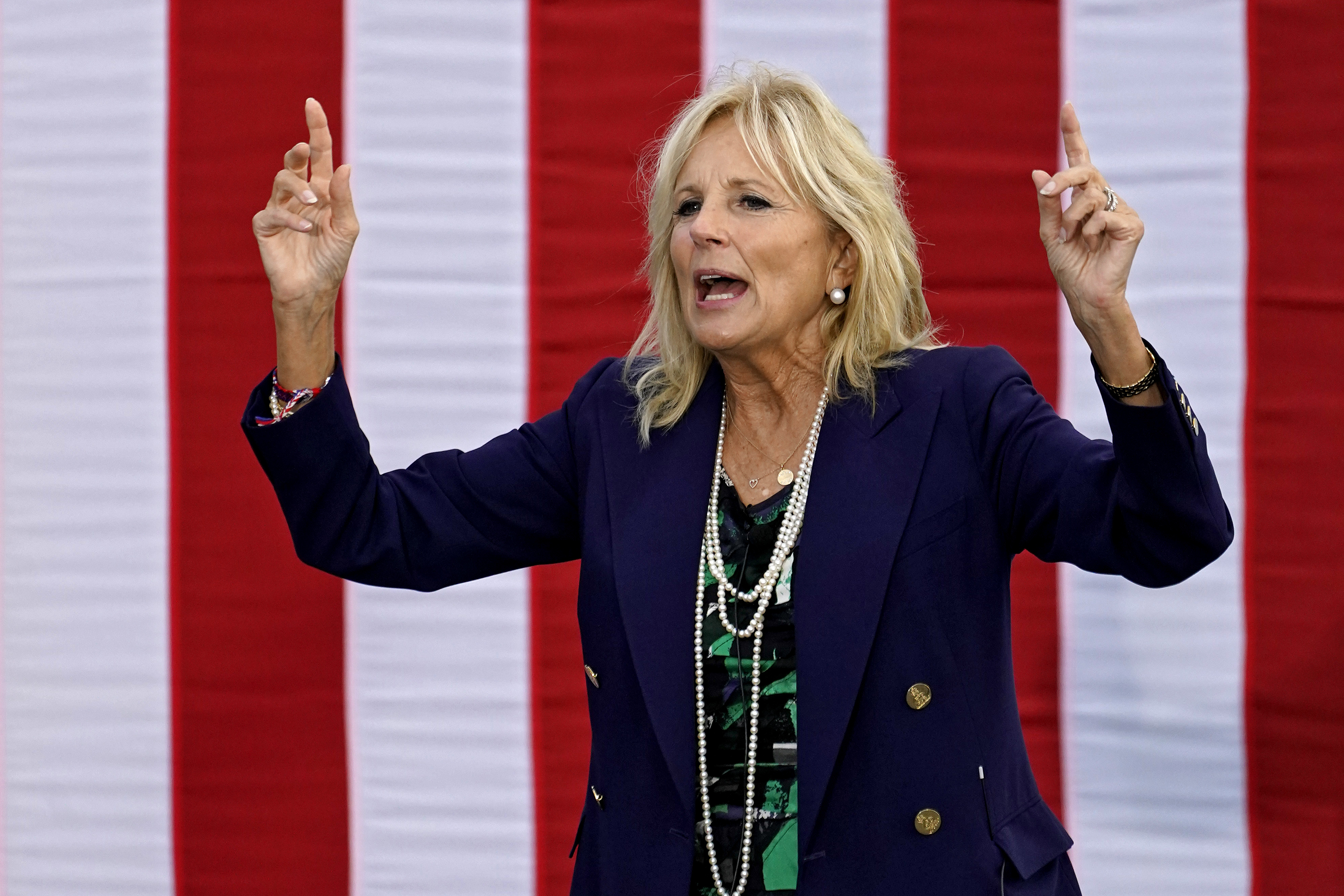 Jill Biden speaks to supporters while campaigning for her husband in Florida on SundayCredit: AP:Associated Press

“The truth is, to beat the virus we first gotta beat Donald Trump. He’s the virus,” Biden said.

The Democrat, who was born in Scranton, also slammed Trump as “Putin’s puppy.”

Biden, who flubbed the word “healthcare” at his Michigan rally this weekend, appeared to make another gaffe on Sunday.

While wearing a Delaware “Fighting Blue Hens” jacket, Biden said: "I know Philadelphia well. I married a Philly girl, by the way. By the way, I got my Eagles jacket on!"