DISGUSTING images showing germs flying out of toilet show the dangers of not closing the lid before flushing.

One flush of the toilet produces thousands of tiny aerosol droplets, which can contain bacteria and viruses and contaminate surfaces up to six feet away. 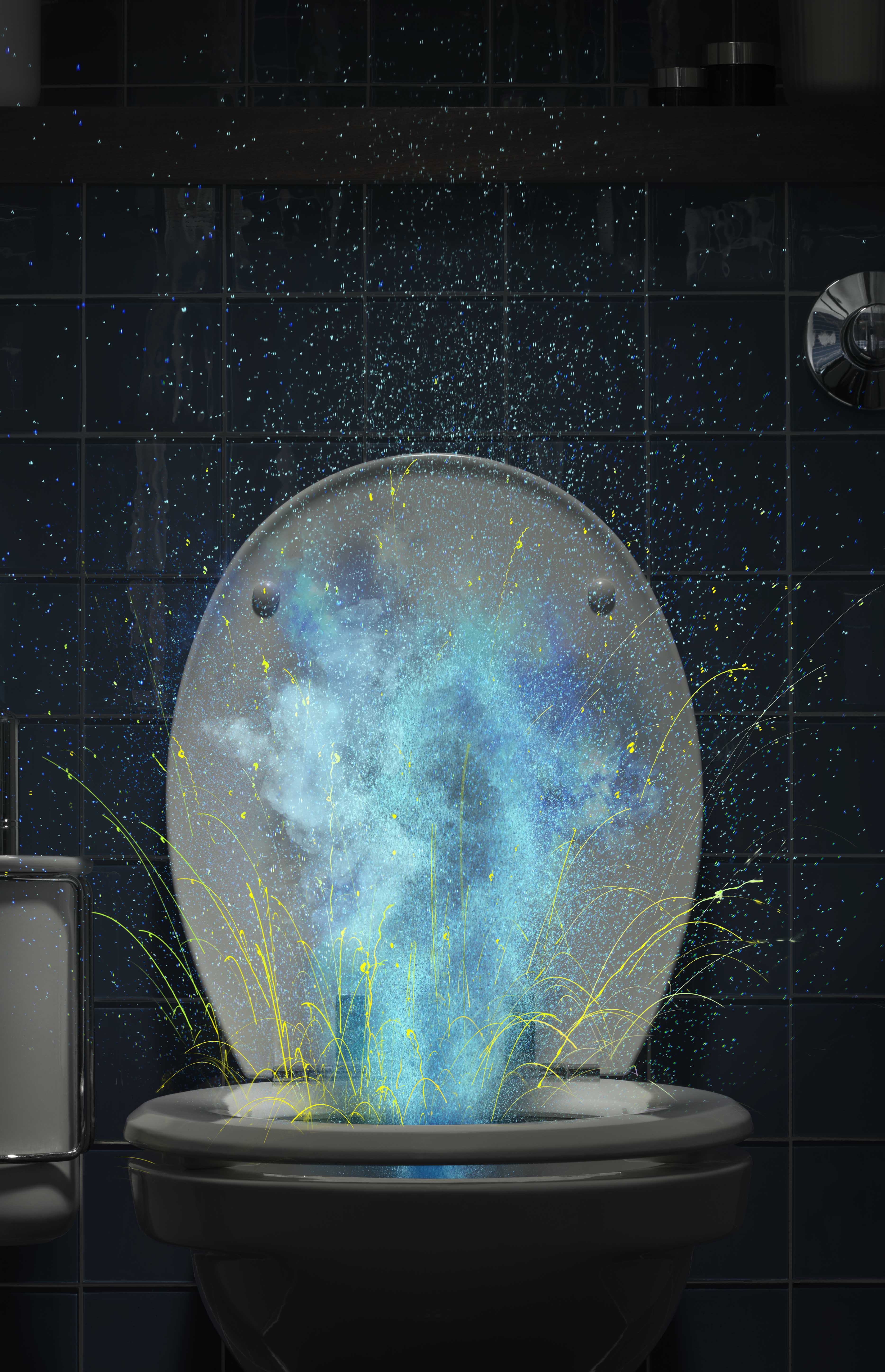 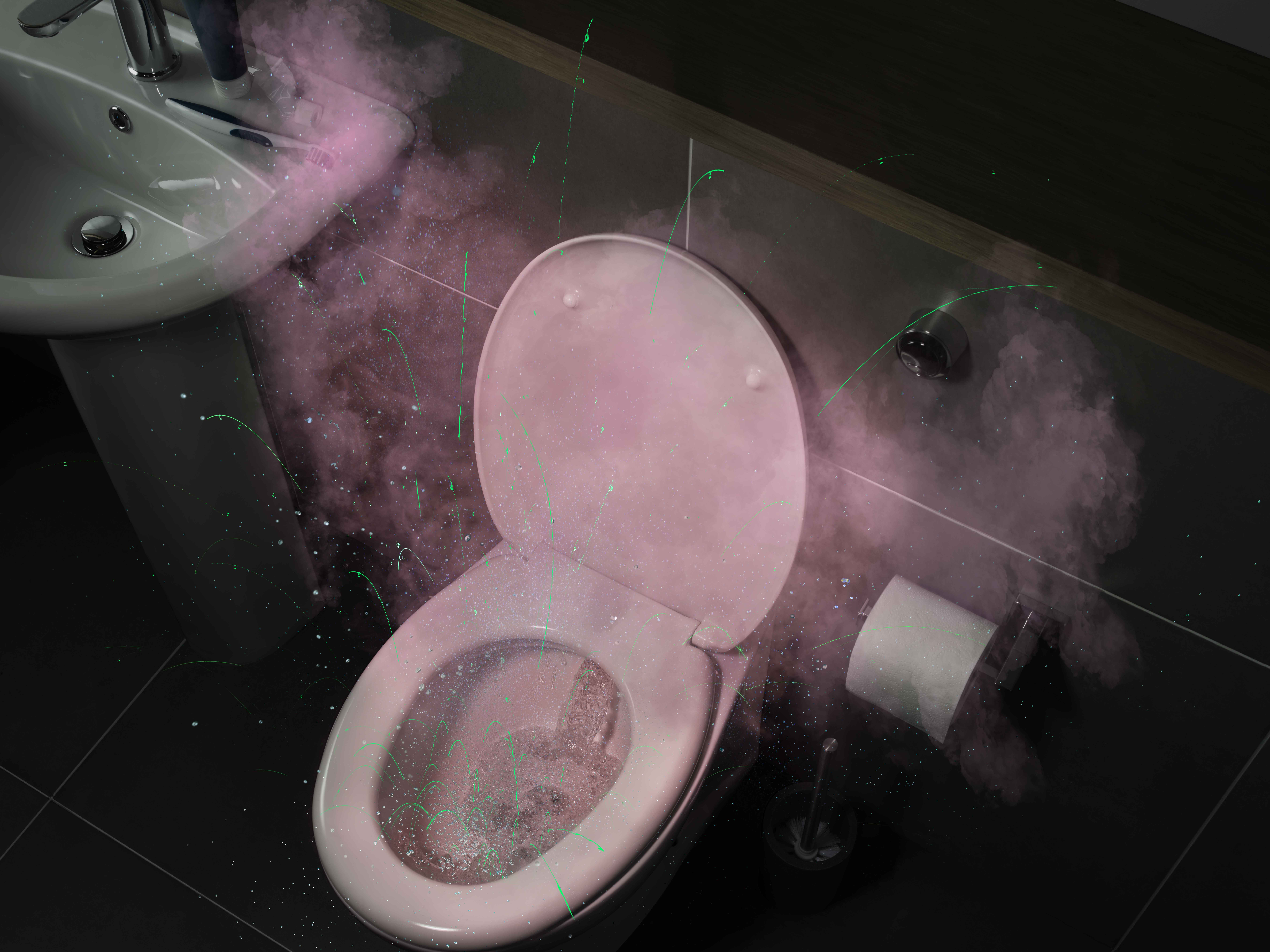 Tiny droplets can contaminate surfaces up to six feet away, officials say 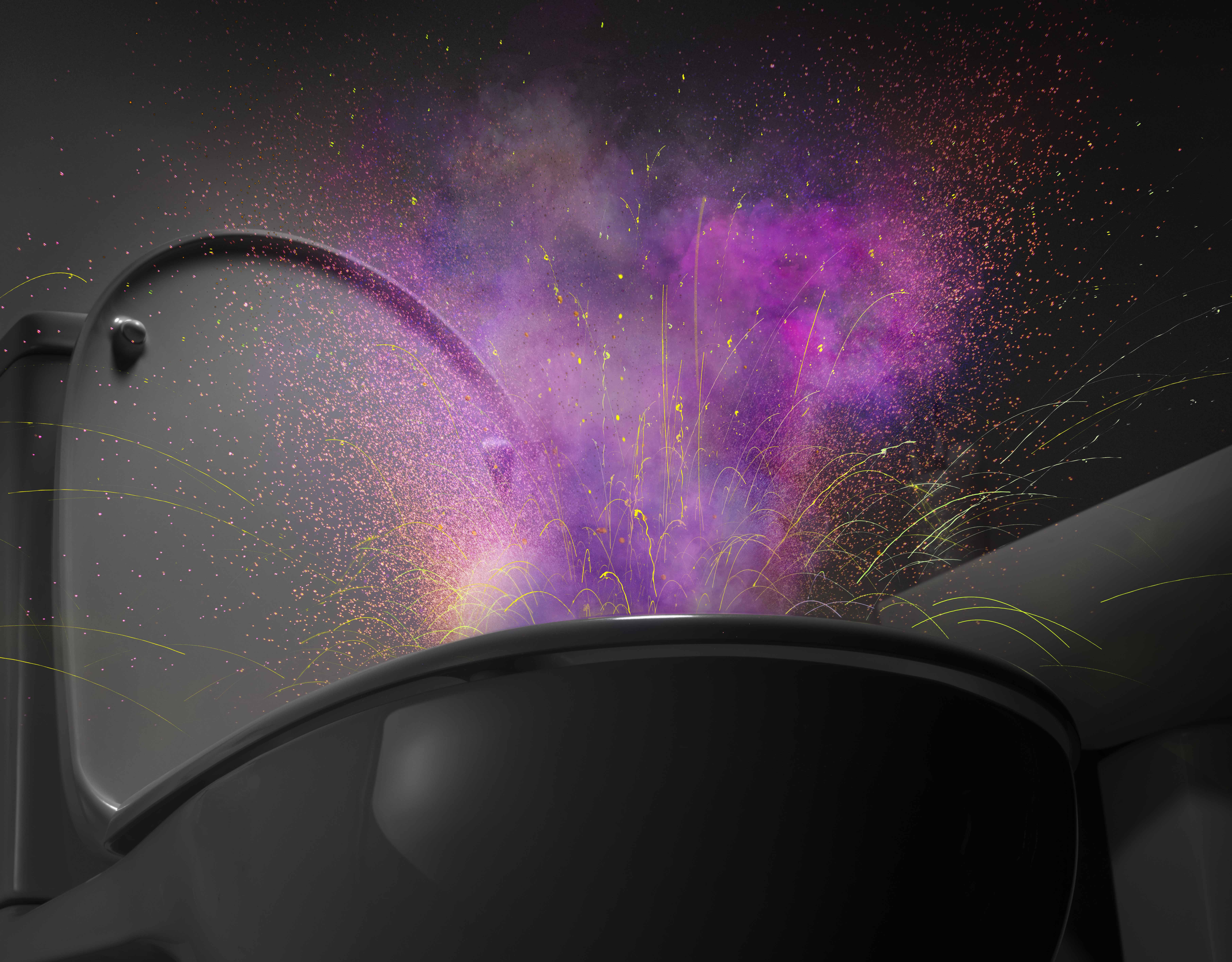 And more than half of British adults don't shut the lid when they flush, according to a survey

But research has revealed 55 per cent of UK adults don’t close the lid when flushing the toilet - despite almost three quarters - 72 per cent - saying they are more hygiene aware than ever before.

To highlight the dangers, Harpic used high-speed specialist camera technology to capture the droplets and particles leaving the toilet.

What looks like fireworks going off is actually aerosol droplets being catapulted out of the toilet pan, which in a different setting could be flying onto surfaces and even into the faces of those in the bathroom.

Officials at Harpic say: “There has never been a more important time to take extra care around our homes.

"Although the risks associated with germ spread in unhygienic bathrooms are high, the solution to keeping them clean is simple. 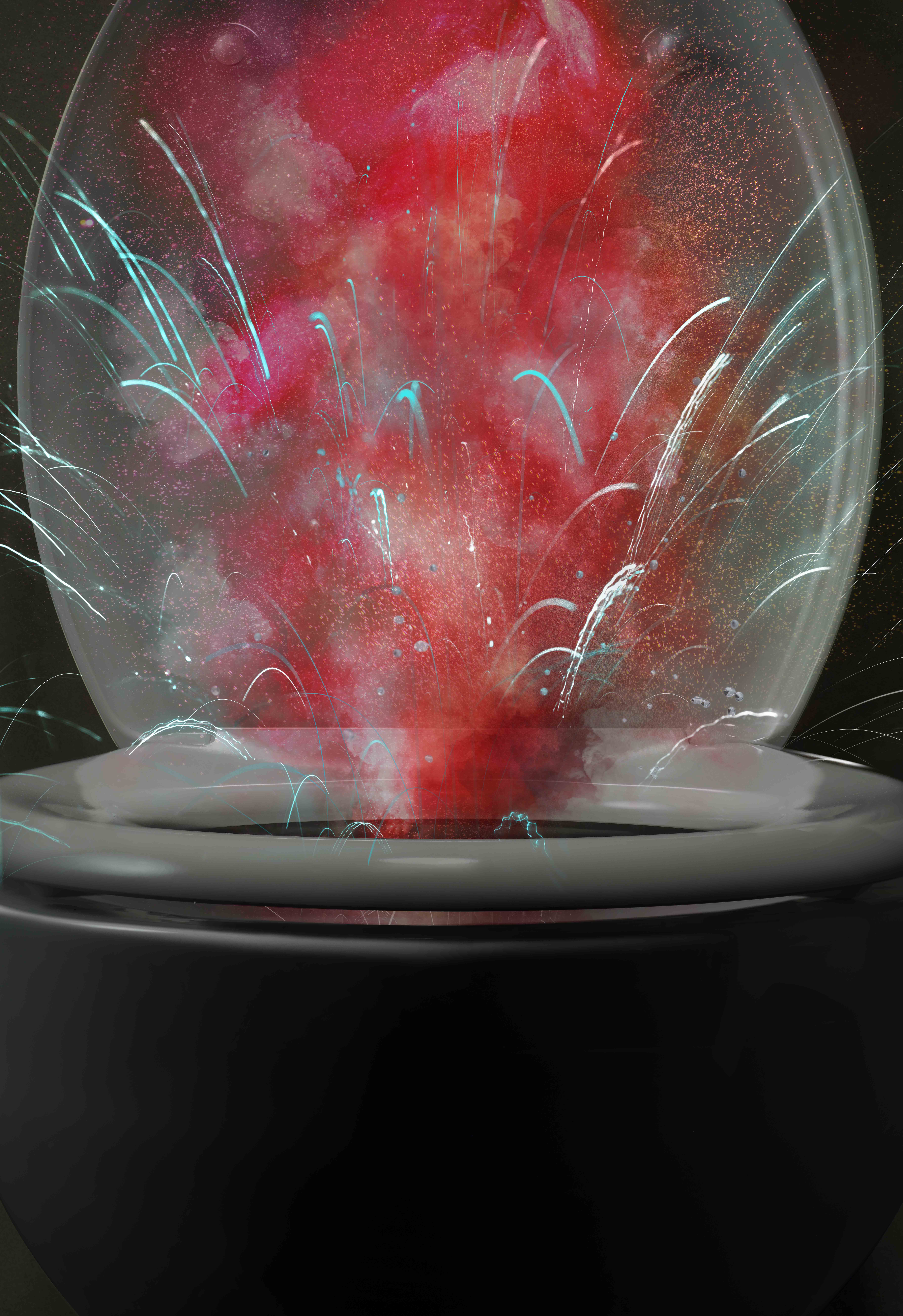 Water from the toilet bowl remains contaminated for several flushes after it's exposed to harmful bacteria Credit: © Jonathan Knowles 2020 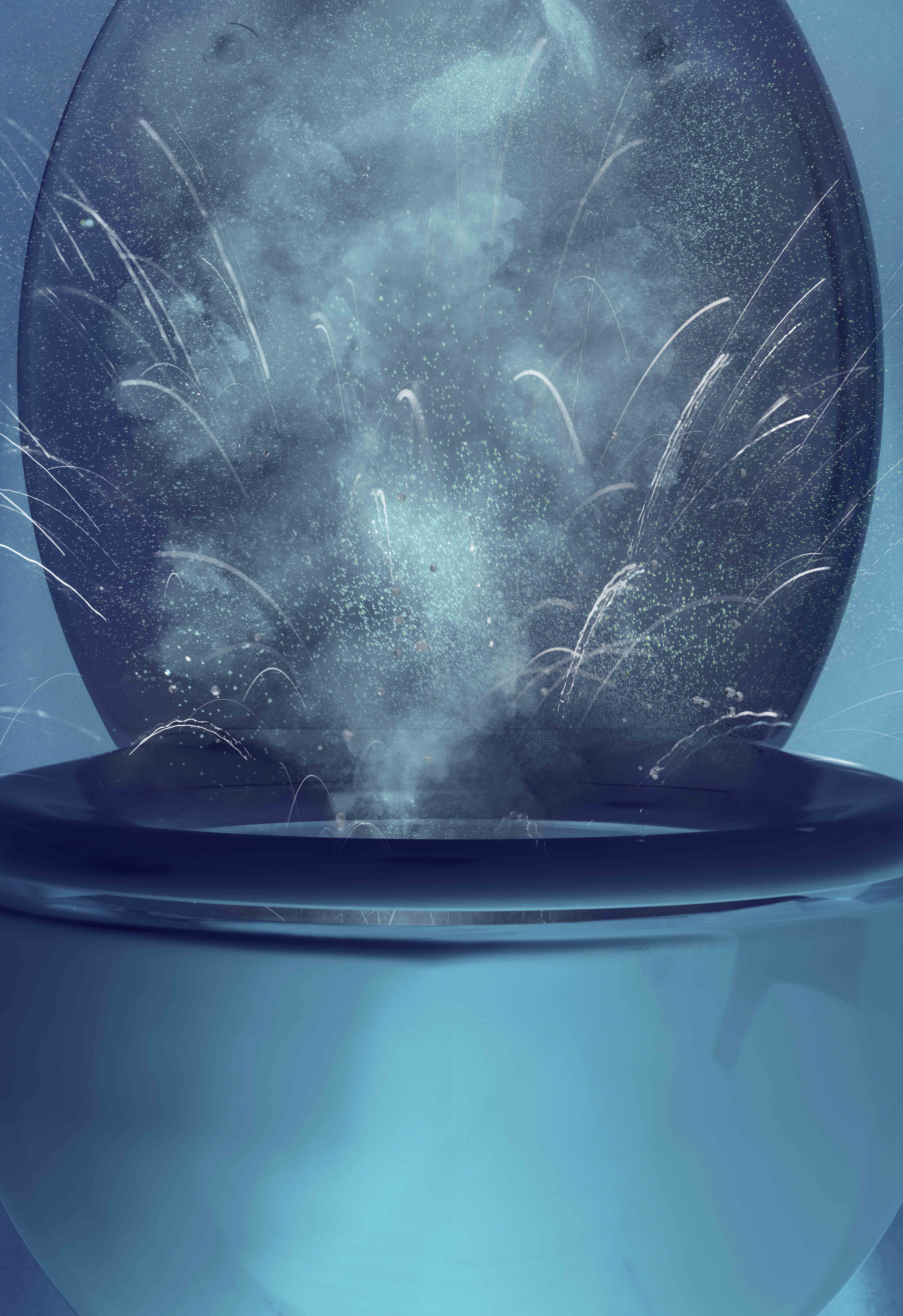 But many Brits say they're more aware of the importance of good hygiene than ever Credit: © Jonathan Knowles 2020

“As experts in hygiene, Harpic are on hand to help everyone stay safe at home.

“We hope our new #CloseTheLid campaign helps inspire people to make simple changes to their cleaning routine that can have long-lasting benefits to the health of the nation.”

Some of the particles produced by a flushing toilet are capable of reaching the lower respiratory tract, which can lead to infection.

If a person touches a surface contaminated by the toilet bowl flush, they can then become infected when they touch the nose or mouth.

When asked why they do not close the lid when flushing the toilet, the top reasons from respondents include being unaware of the risks of not flushing (47 per cent), feeling afraid to touch the lid (24 per cent), and general forgetfulness (15 per cent).

However, almost all of  the 2,000 respondents (95 per cent) admitted they will start to close the lid after being made aware of the risks.

The research commissioned by Harpic revealed Brits are already taking important steps in ramping up their cleaning efforts.

Cleaning the toilet bowl (49 per cent), deep cleaning the bathroom more frequently (45 per cent) and mopping the floor (44 per cent) are the top things the nation has started doing more of over the last six months.

To help keep households safe and happy, Harpic is calling on the nation to carry out a simple three stage routine when cleaning the bathroom.

The company says the most important step is to #CloseTheLid when flushing to help prevent the spread of germs.

Brits should also ensure that they are using a toilet cleaner that removes limescale, which provides a home to germs, as well as disinfecting to maintain ultimate hygiene.

The third routine is to wear gloves while cleaning for extra protection, and wash hands after use.