THE White House is WALLED UP with huge barriers after unrest in the streets as Donald Trump waits for word on his fate.

Pictures show massive fences around the 1600 Pennsylvania Avenue as mail-in ballots continue to be counted in key battleground states. 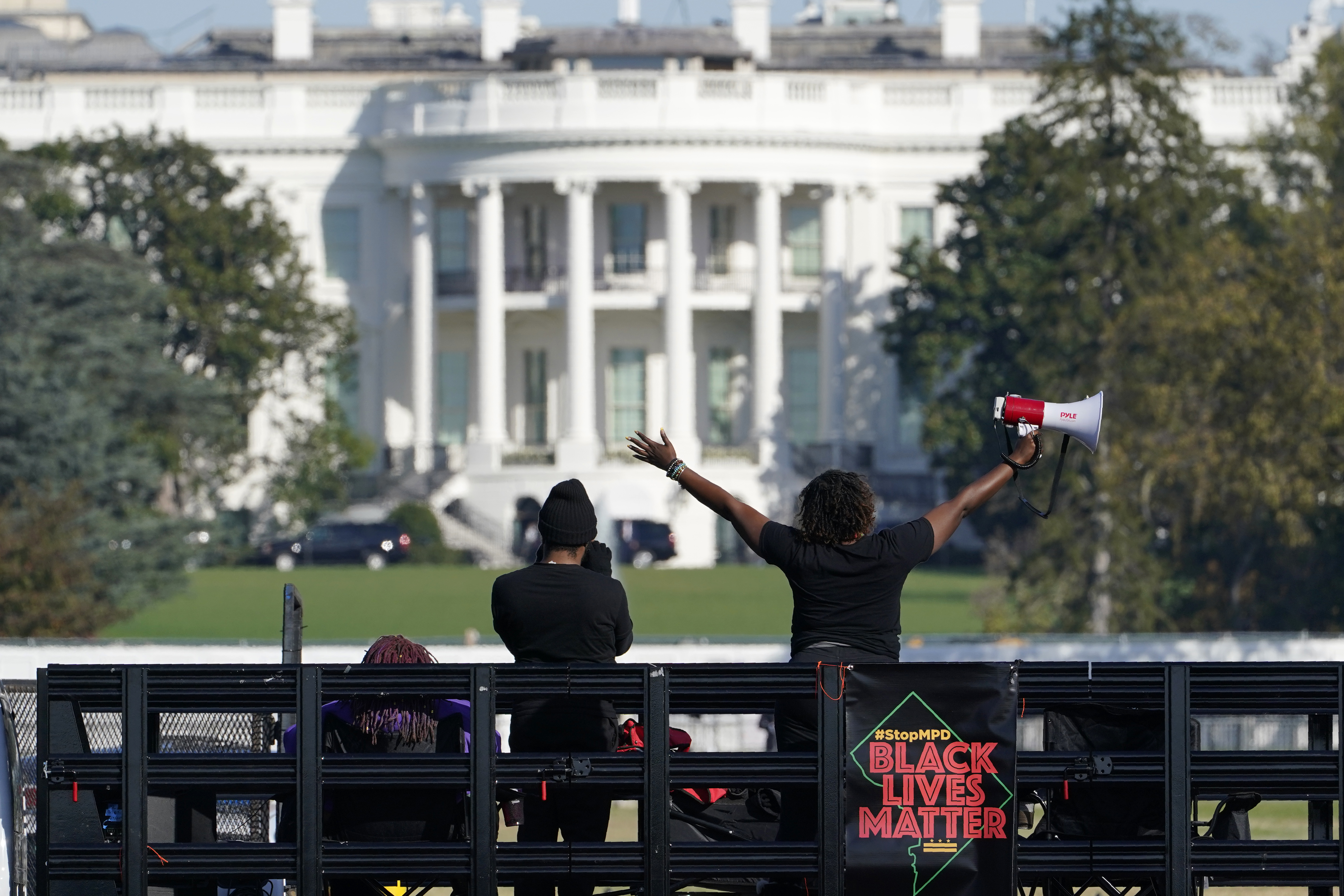 Massive fences surround the White House amid unrest over the electionCredit: AP:Associated Press 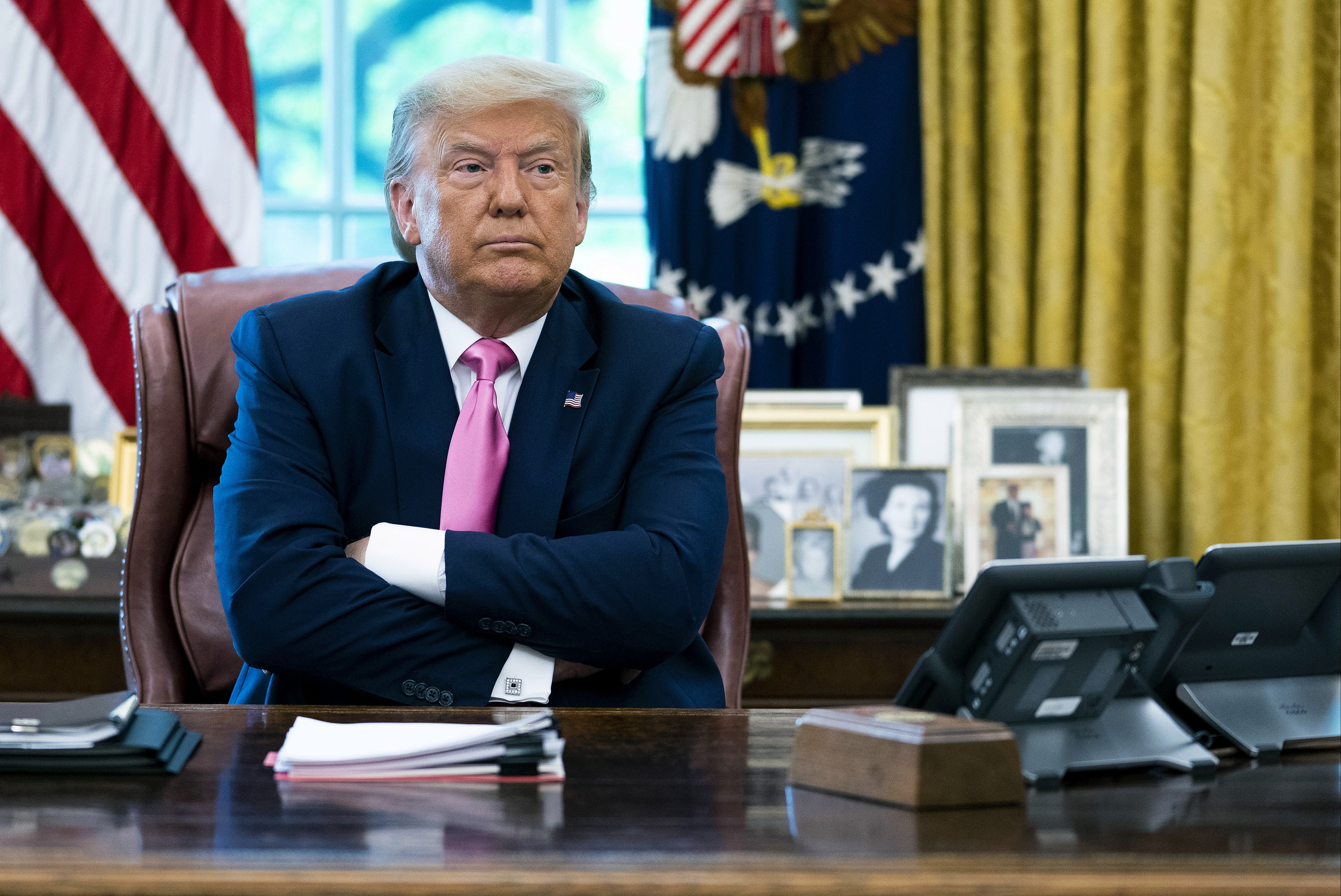 President Trump is awaiting his fate over the election resultsCredit: Getty - Pool 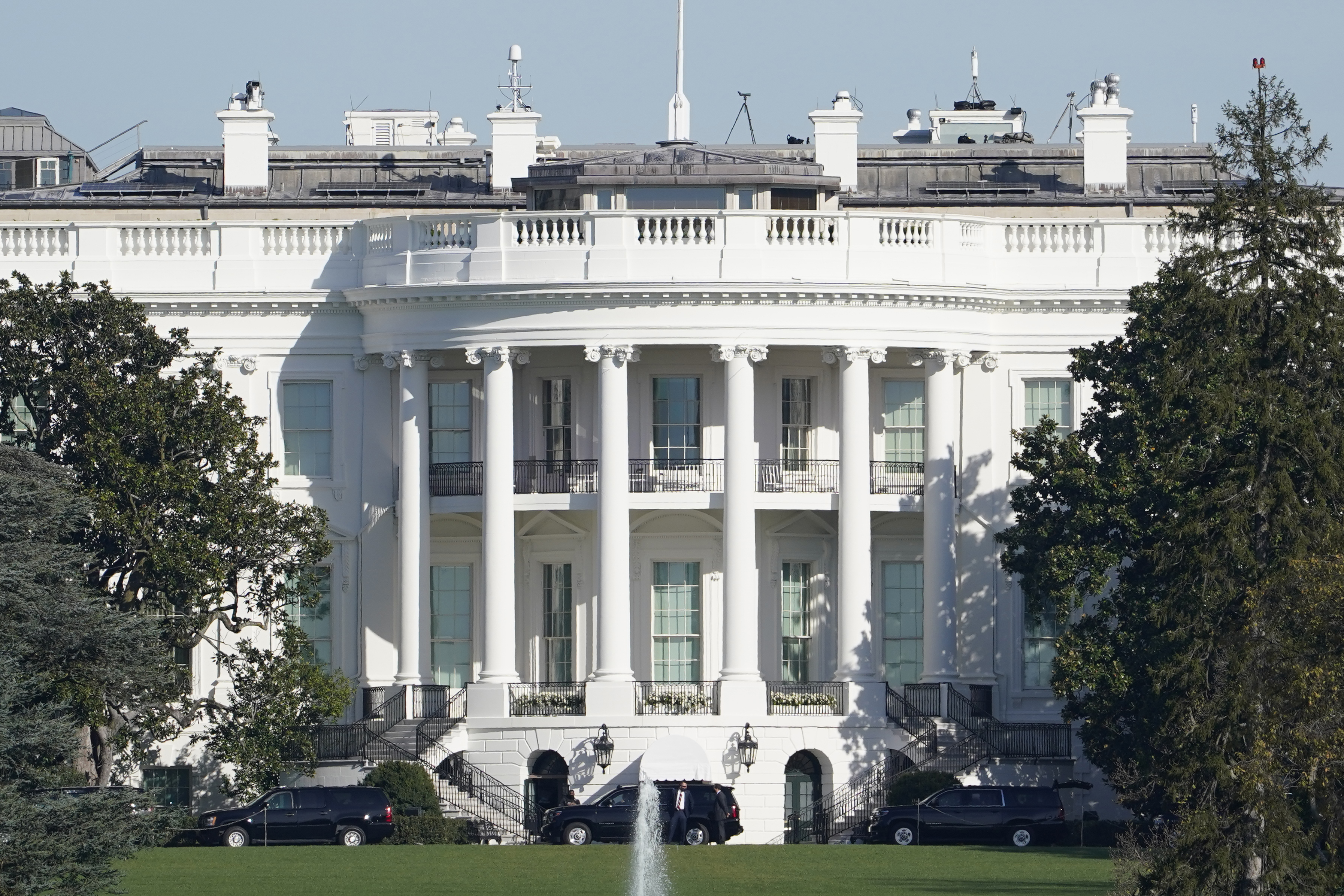 Trump's schedule has been nearly empty as his future remains in limboCredit: AP:Associated Press

One picture shows a "BLACK LIVES MATTER" sign on the massive fences in Washington DC.

As Trump sits inside while votes continue to be tallied, protesters were seen on the streets amid unrest surrounding the election.

Demonstrators with ShutDown DC on Thursday were seen in the streets, calling for all votes from the presidential election to be counted.

Protesters held signs that read things like "YOU WILL NOT SILENCE US" and "OUR TIME TO RISE."

Marchers held a large banner that read: "THIS IS A DEMOCRACY ACT LIKE IT." 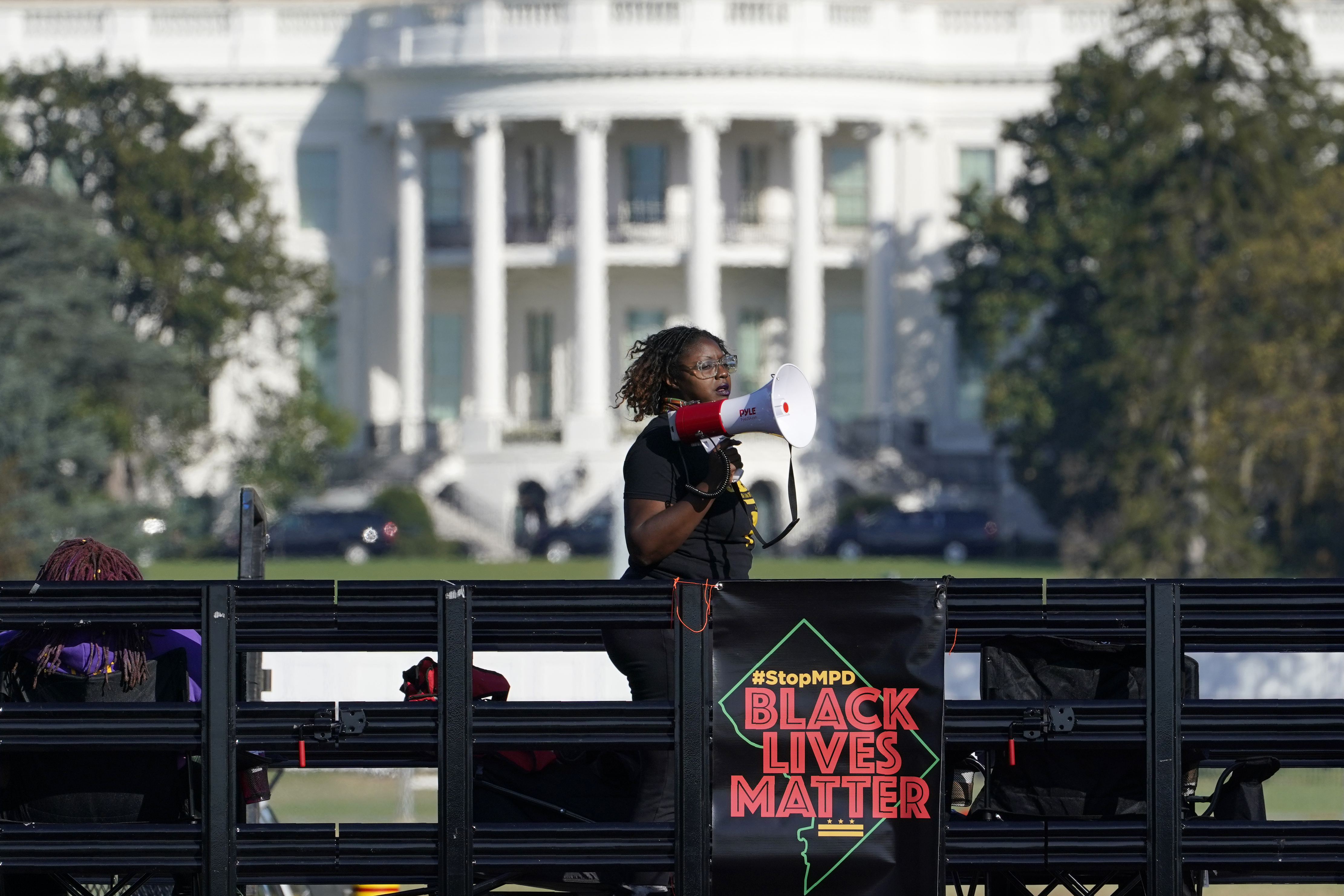 The White House is surrounded by fences amid unrest in recent daysCredit: AP:Associated Press 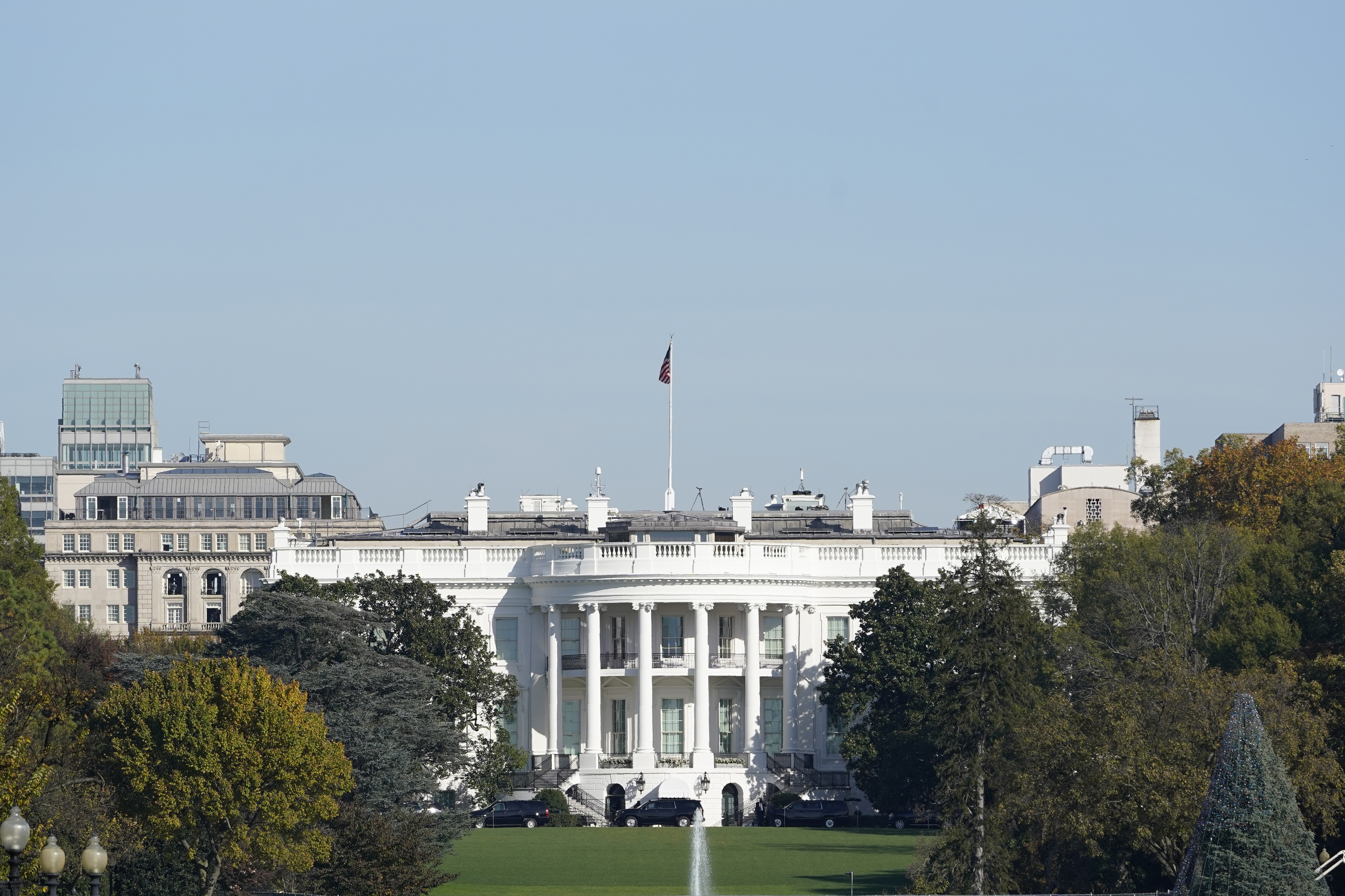 Trump's schedule shows he has no plans to leave the White House as Biden continues to hold a lead in the electionCredit: AP:Associated Press 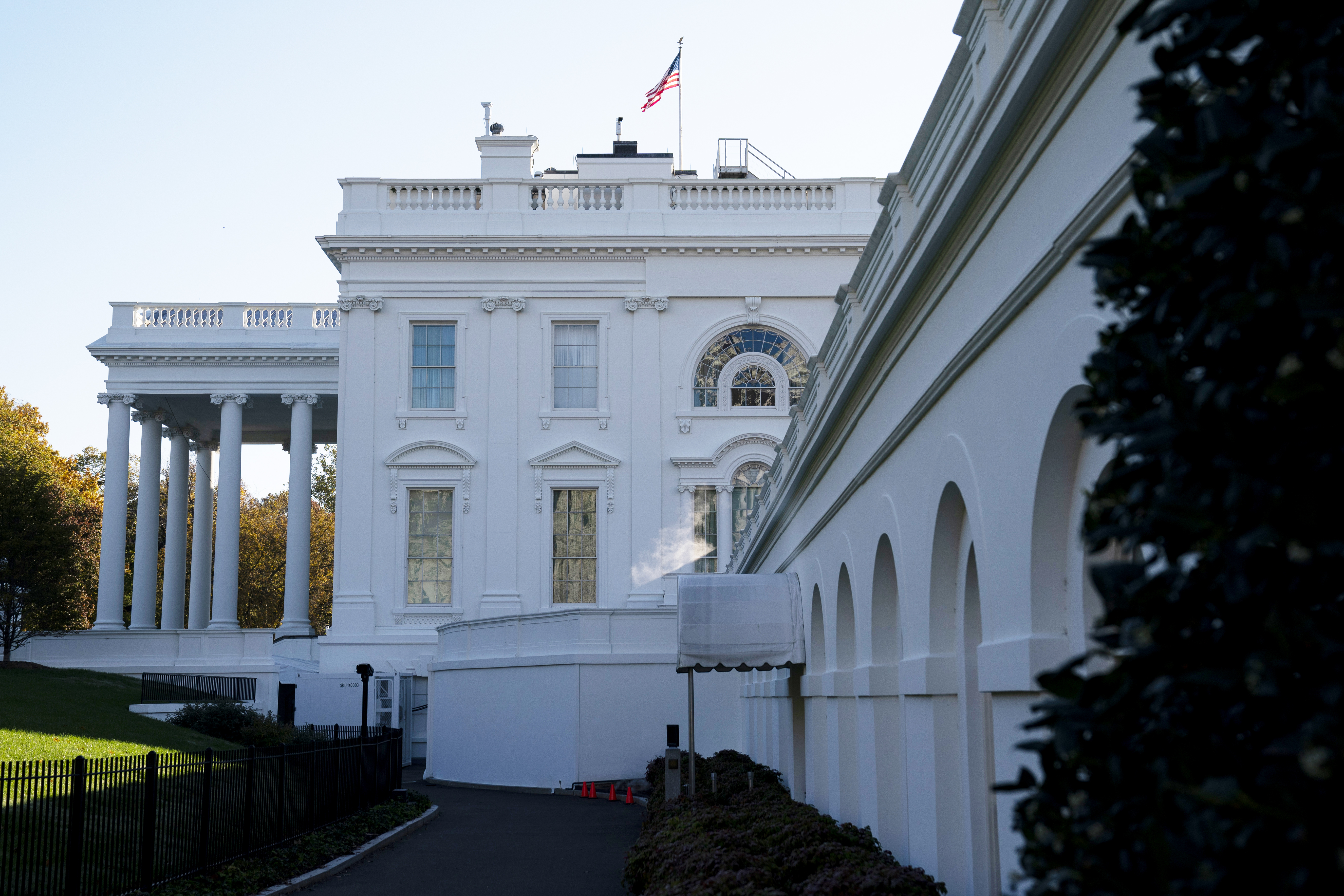 The White House is seen on Thursday as votes across the country continue to be talliedCredit: AP:Associated Press 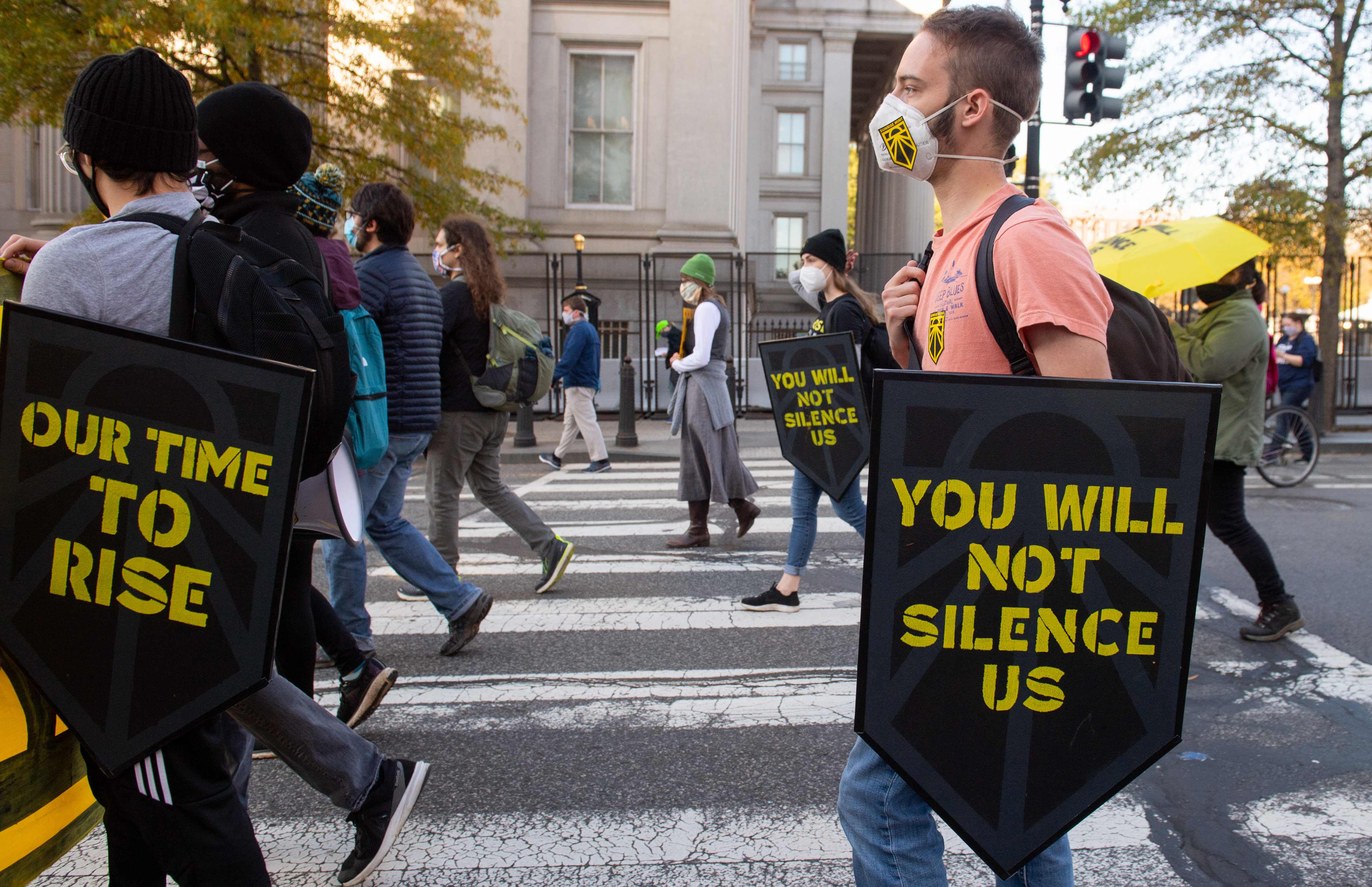 Demonstrators are seen on the streets of DC on Thursday demanding votes be countedCredit: AFP or licensors 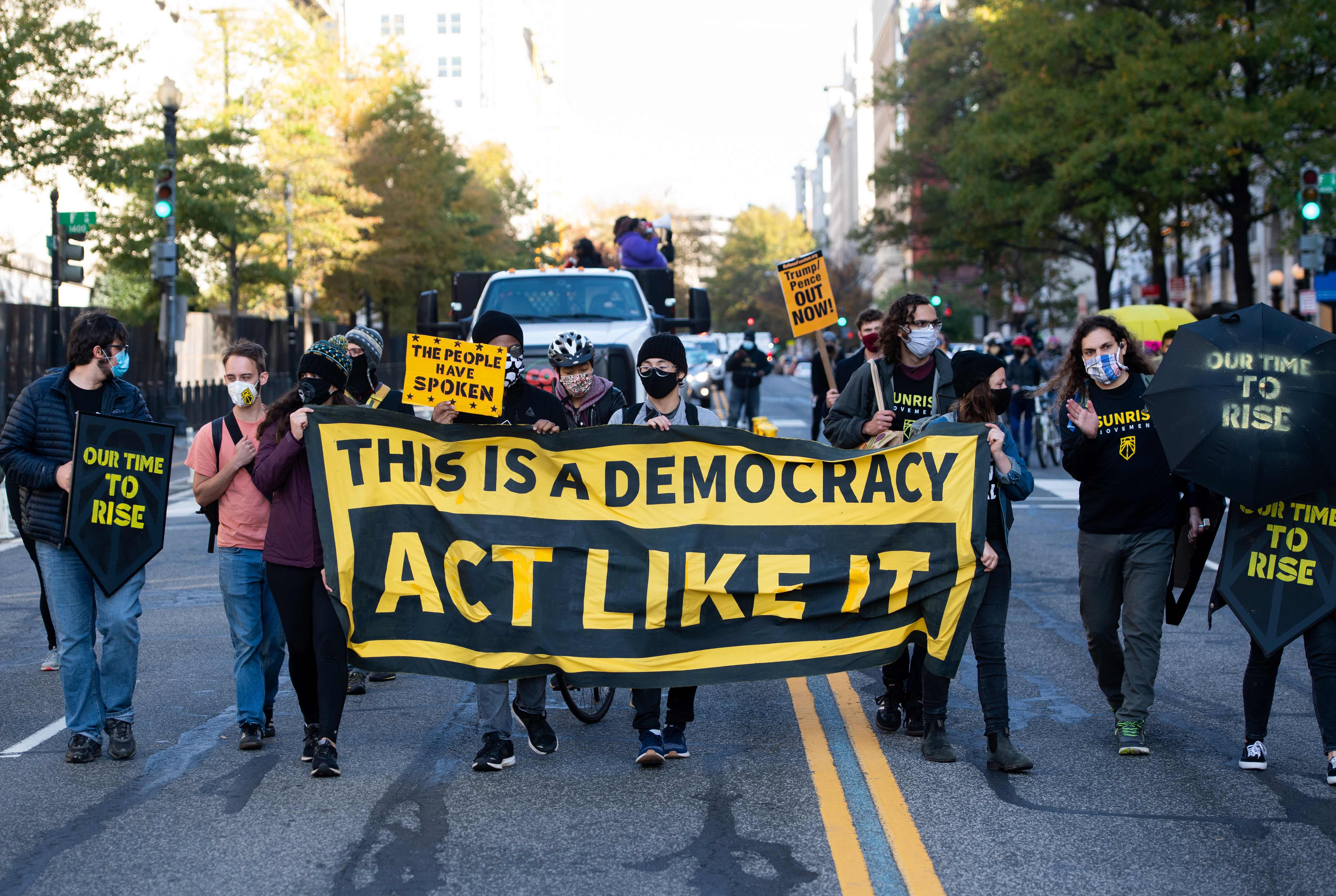 Marchers hold a banner that reads 'THIS IS A DEMOCRACY ACT LIKE IT'Credit: AFP or licensors

Some protesters were seen on bicycles or in cars in the streets of DC, carrying signs that called for votes to be counted.

On Wednesday night, demonstrators were seen outside the White House holding Biden 2020 flags and celebrating Joe Biden getting closer to winning the election.

Trump's schedule has remained virtually empty as he awaits the results of the election. 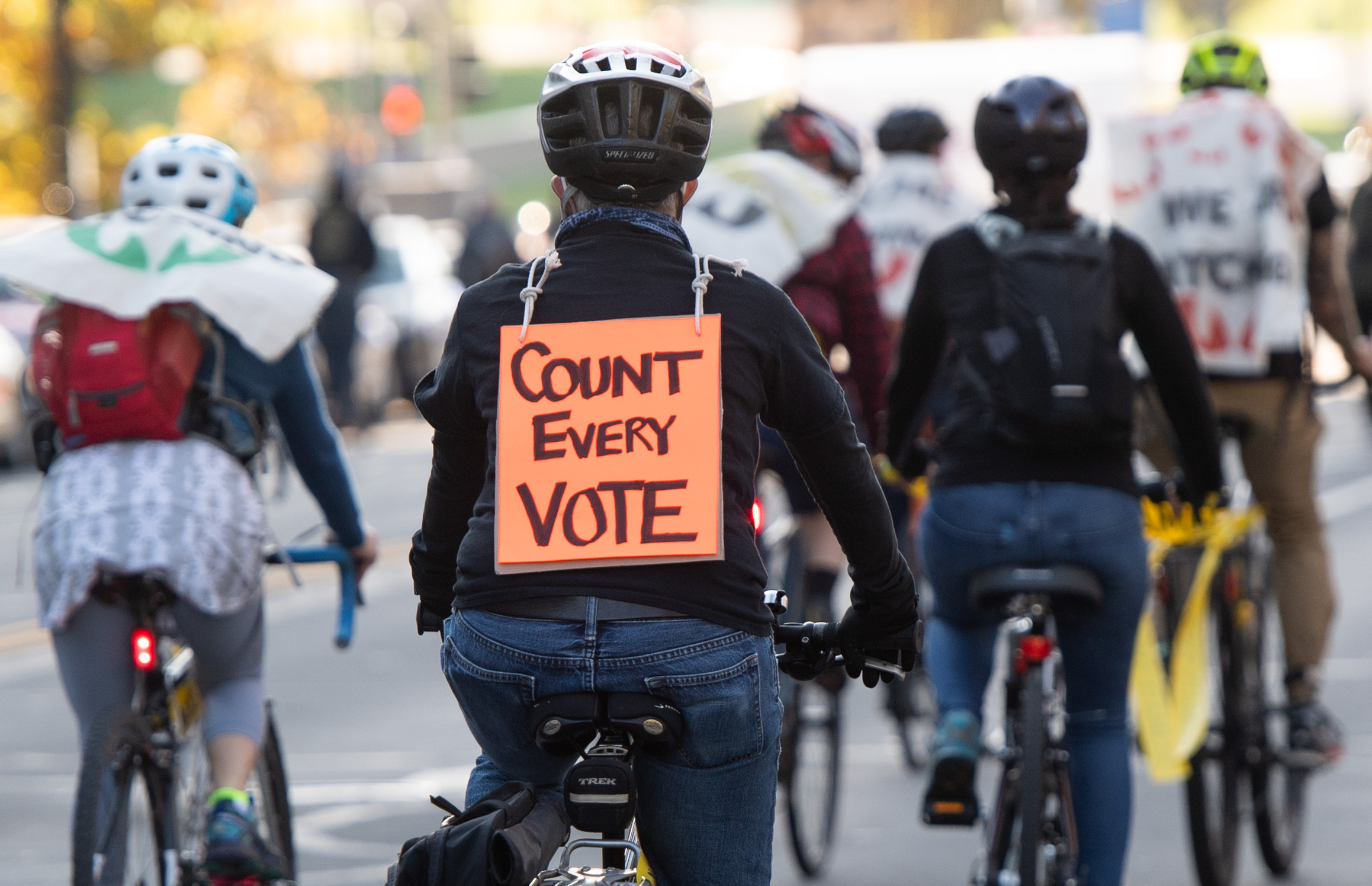 A bicyclist wears a sign calling for every vote to be countedCredit: AFP or licensors 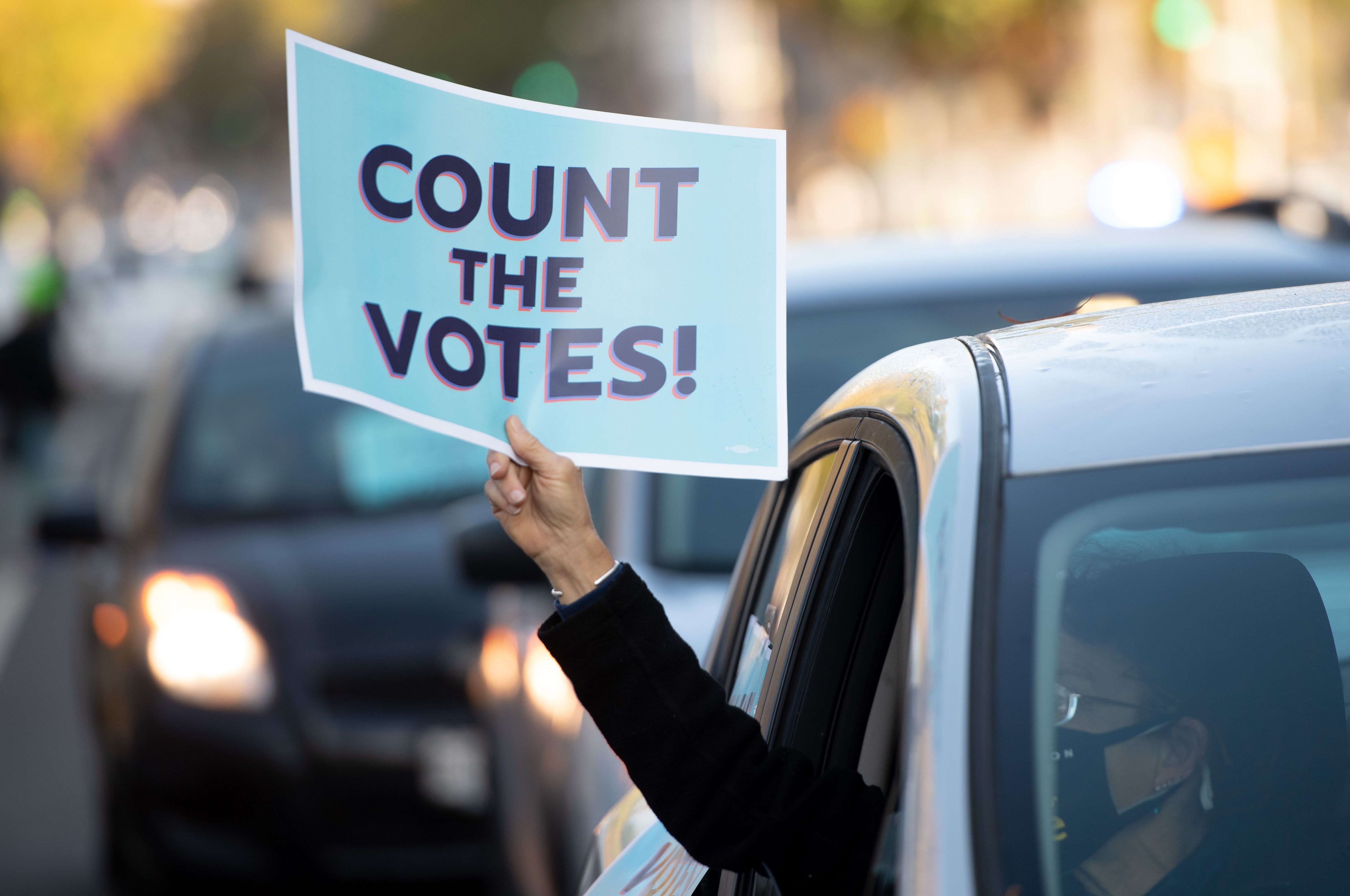 A passenger in a car holds a sign that says 'COUNT THE VOTES!'Credit: AFP or licensors

Trump declared an early victory when giving a speech in the early hours of Wednesday morning – despite there being millions of ballots that have yet to be counted.

Despite holding leads in many key battleground states on Election night, Democratic candidate Joe Biden took the lead in states including Michigan and Wisconsin – putting him close to the 270 electoral votes needed to win the election.

As states flipped in Biden's favor, and Trump's lead in many battleground states has narrowed, he and his campaign have made baseless claims of voter fraud. 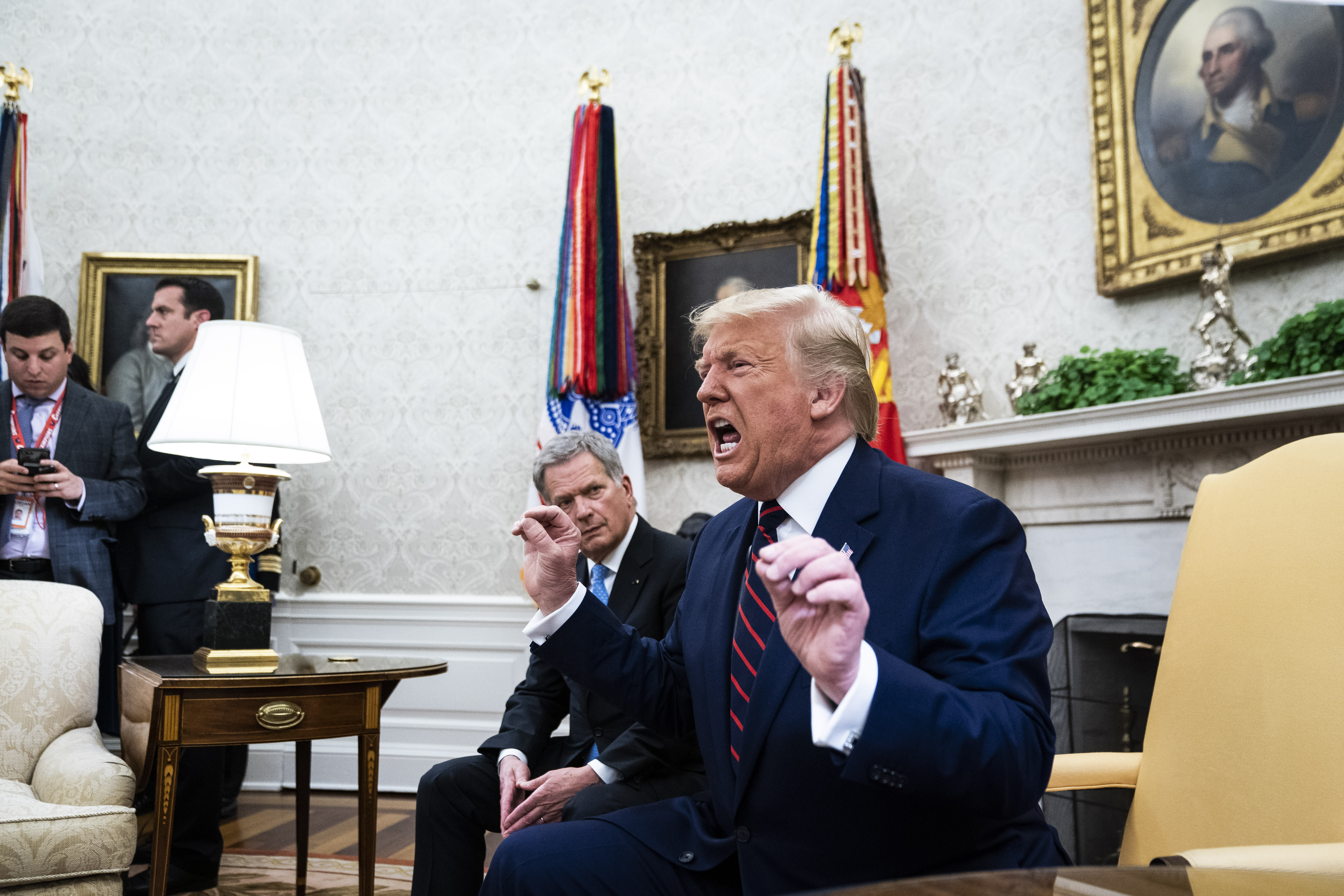 Trump and his campaign have made baseless claims of voter fraud and launched legal battles in several battleground stateCredit: Getty Images - Getty 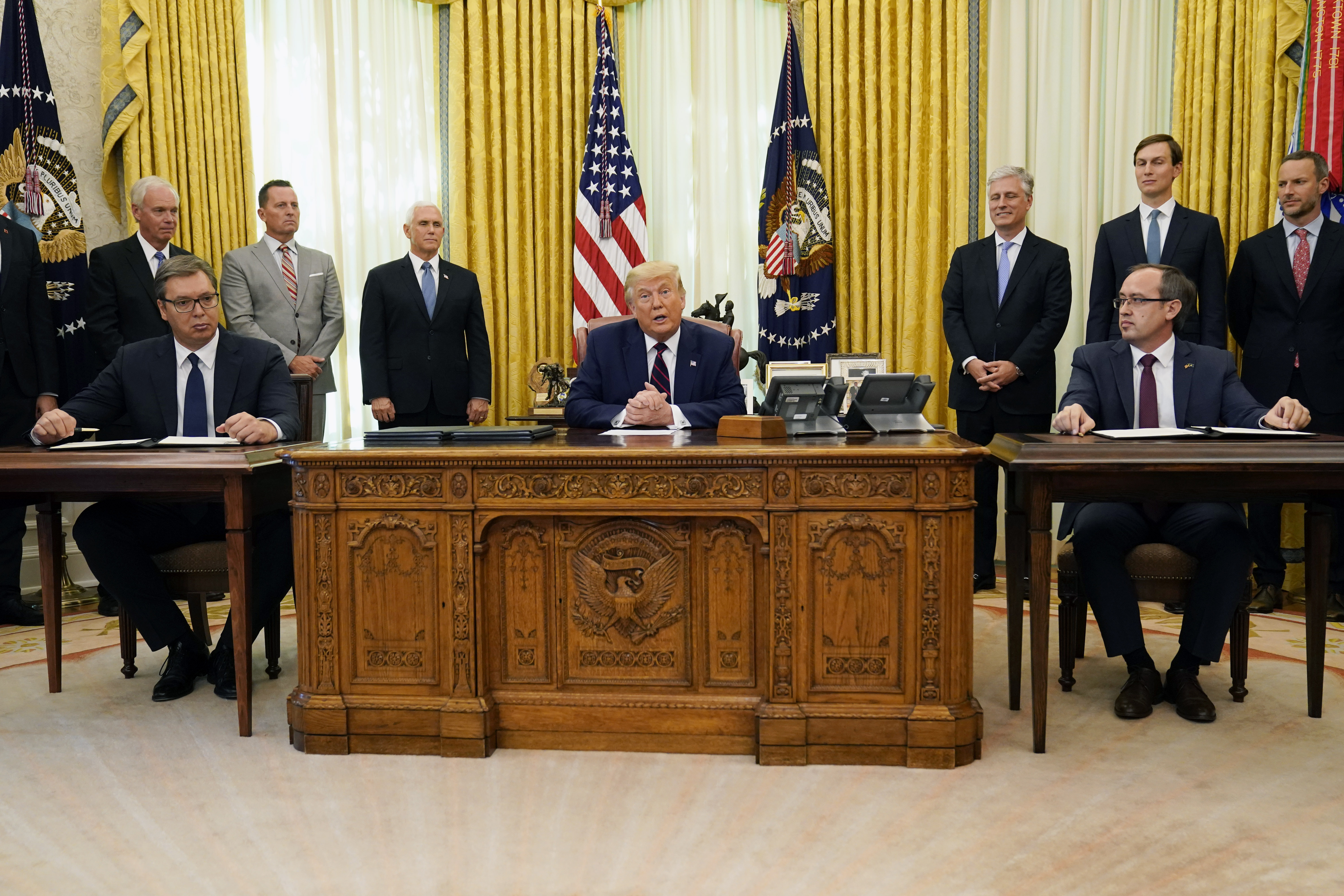 Trump's campaign demanded a recount of ballots in Wisconsin.

His campaign has also announced they're launching lawsuits in several states, including Pennsylvania, Michigan, and Georgia amid voter fraud claims.

As Trump awaits the results of the election to see if he will serve a second term or be booted from the White House, he's been vocal on Twitter.

Trump has made numerous calls on Twitter – which have been flagged as "misleading" – claiming that votes tallied after election day will not be counted.

"ANY VOTE THAT CAME IN AFTER ELECTION DAY WILL NOT BE COUNTED!" he added in a separate tweet.

Biden's campaign has called for all votes to be counted, as he remains confident that he will win the presidency.