AL Capone, born in 1899, was the infamous boss of the organised crime gang the Chicago Outfit.

The mobster, also known as “Scarface,” is believed to have hidden “millions” before he was imprisoned in 1931 on tax evasion charges.

Capone was in prison for seven years, six months and 15 days and released on November 16, 1939.

He had originally been handed an 11-year sentence.

Capone had paid back all is fines and back taxes.

Immediately on his release he was taken to a Baltimore hospital for brain treatment before going to his Florida home.

In 1946, his physician and a Baltimore psychiatrist, after examination, both concluded Capone then had the mentality of a 12-year-old child, according to the FBI.

Capone lived on Palm Island with his wife and immediate family until his death due to a stroke and pneumonia on January 25, 1947.

What was Al Capone in prison for?

Despite Capone’s racketeering empire, the authorities had difficultly building a case against him due to the law and a lack of hard evidence against him.

He was initially arrested in Philadelphia by local cops for carrying a concealed weapon and was sentenced to a year behind bars.

After he was released in 1931 he was then tried and convicted for an outstanding contempt of court issue which dated back to 1929.

A federal judge sentenced him to six months in prison.

During this time federal Treasury agents had been gathering evidence that Capone had failed to pay his income taxes.

How did Capone get syphilis?

Capone is thought to have contracted syphilis in his late teens as his son was born with the disease in 1919.

Capone was injected with mercury during his time at the notorious Alcatraz prison, San Francisco, as an experimental treatment for syphilis in the 1930s - causing his mental health to deteriorate.

In 2019 his great-niece Diedre Capone told The Sun: “My grandfather told me this with tears streaming down his cheeks. He said, ‘Deirdre, they called me from Alcatraz and said your uncle was getting out, but they just discovered they had a new treatment for syphilis and wanted to try it out on your uncle so I agreed’.

“They took him out of Alcatraz and they put him in the hospital on Terminal Island, Los Angeles, and that is the first time that you will find any press at all that Al Capone became angry and violent and they had to put him in solitary confinement.

“And it's because they were injecting my uncle with mercury because they thought mercury could cure syphilis. If you read Alice in wonderland, you know what mercury does to the human brain. It causes insanity. That's exactly what happened to my uncle.” 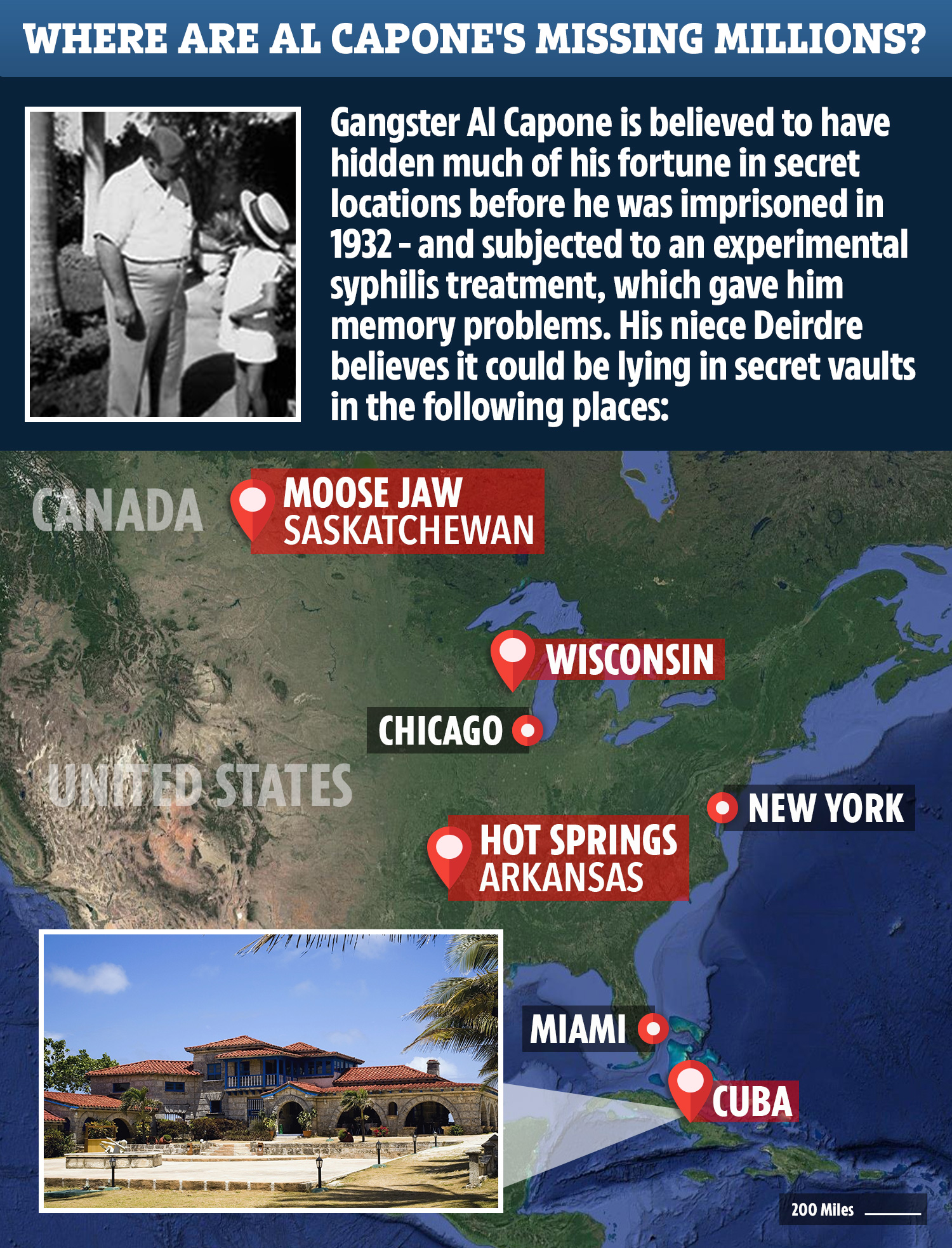 Where Capone may have stashed his money

What was Al Capone's net worth?

His great-niece Diedre estimated Capone may have amassed a $100million fortune over the years.

However due to his mental health he wasn’t able to reveal where the money was hidden.

It’s thought the lost fortune may be hidden in safety deposit boxes in Cuba or hidden in underground vaults at other properties he secretly owned in the US.

As well as illegally running an alcohol distribution organisation during prohibition, Capone’s crime gang also ran brothels and gambling syndicates, money laundering and other criminal activities in the 1920s.

They also ran thousands of bars in Chicago and in 1926 the US Attorney's office estimated they had grossed $105million.

Many treasure hunters have tried to trace the missing millions - and in 1986 30 million people watched a two-hour TV special in the US where talk show host Geraldo Rivera opened a secret vault discovered in a Chicago hotel once owned by Capone. The vault turned out to be empty.

Deirdre believes that some of the fortune was held in Cuba - and maybe in locations she knows he visited such as Wisconsin, Arkansas and Canada.

Tom Hardy transforms himself into Al Capone for biopic Capone