I was held at gunpoint, penned in by Al Qaeda and hunted by hyenas crossing ‘world’s most dangerous borders’

AS he stood facing the barrel of an AK-47, adventurer Reza Pakravan was aware it could have been the last thing he ever saw.

The camera he carried made him a target for the most dangerous criminals in the war-torn region of The Sahelian Belt in Africa, where people smugglers and terrorists run rife. 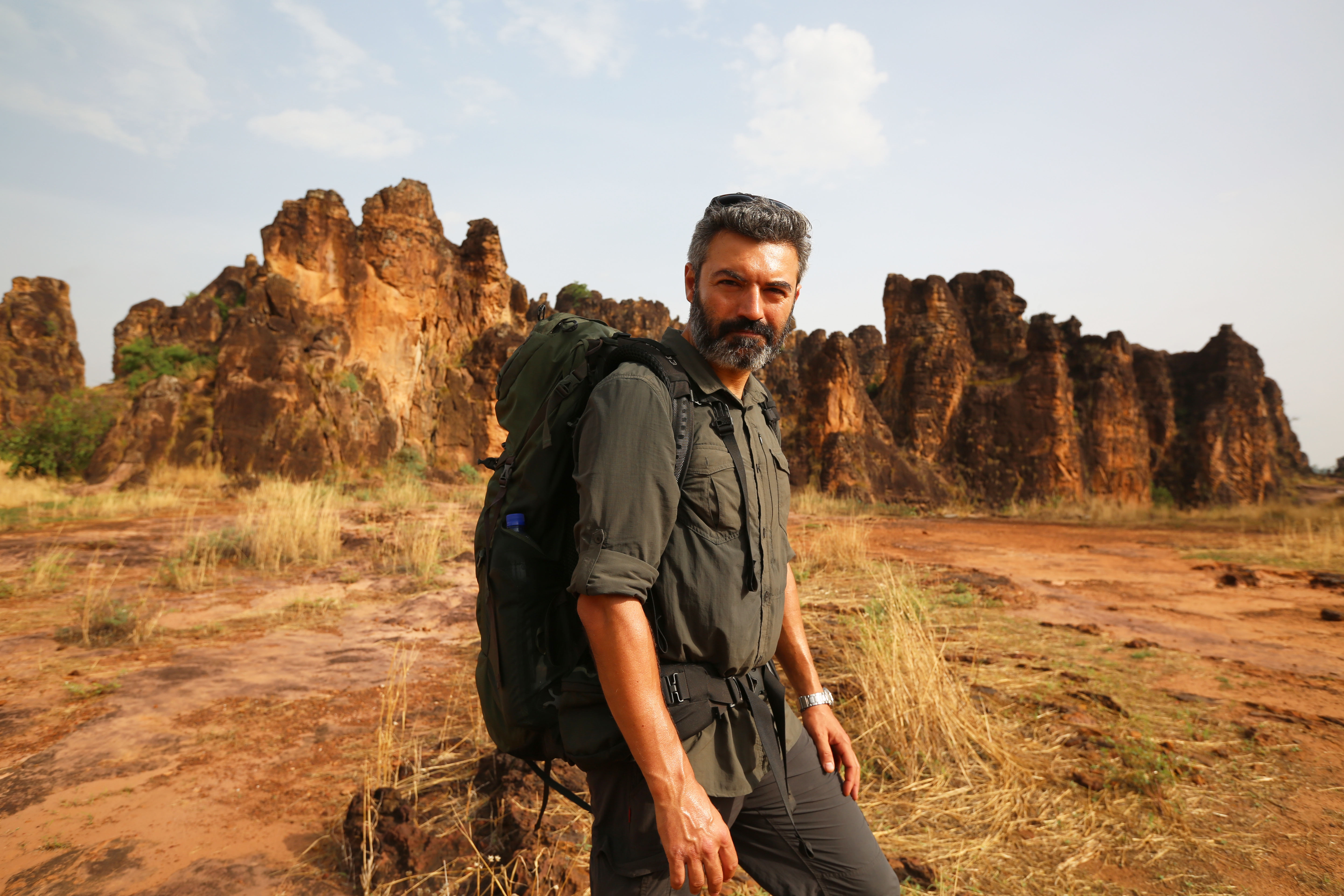 Reza Pakravan repeatedly put his life on the line during the making of The World's Most Dangerous BordersCredit: Signature Films

Once noticed by the violent thugs, he realised there was little he could do to escape with his life.

Recounting the terrifying moment, the British explorer said: “It was getting dark. I was in the middle of the desert, with no security, police or army in sight, stuck in between human smugglers and illegal migrants.

“They could have killed me, and nobody would have noticed. The smuggler walked towards me, his face covered, his furious eyes redder than the desert dust.

“He waved his AK-47 at me, shouting and trying to grab my camera. Heart pounding and skin aflame, I wondered if I would get out alive.” 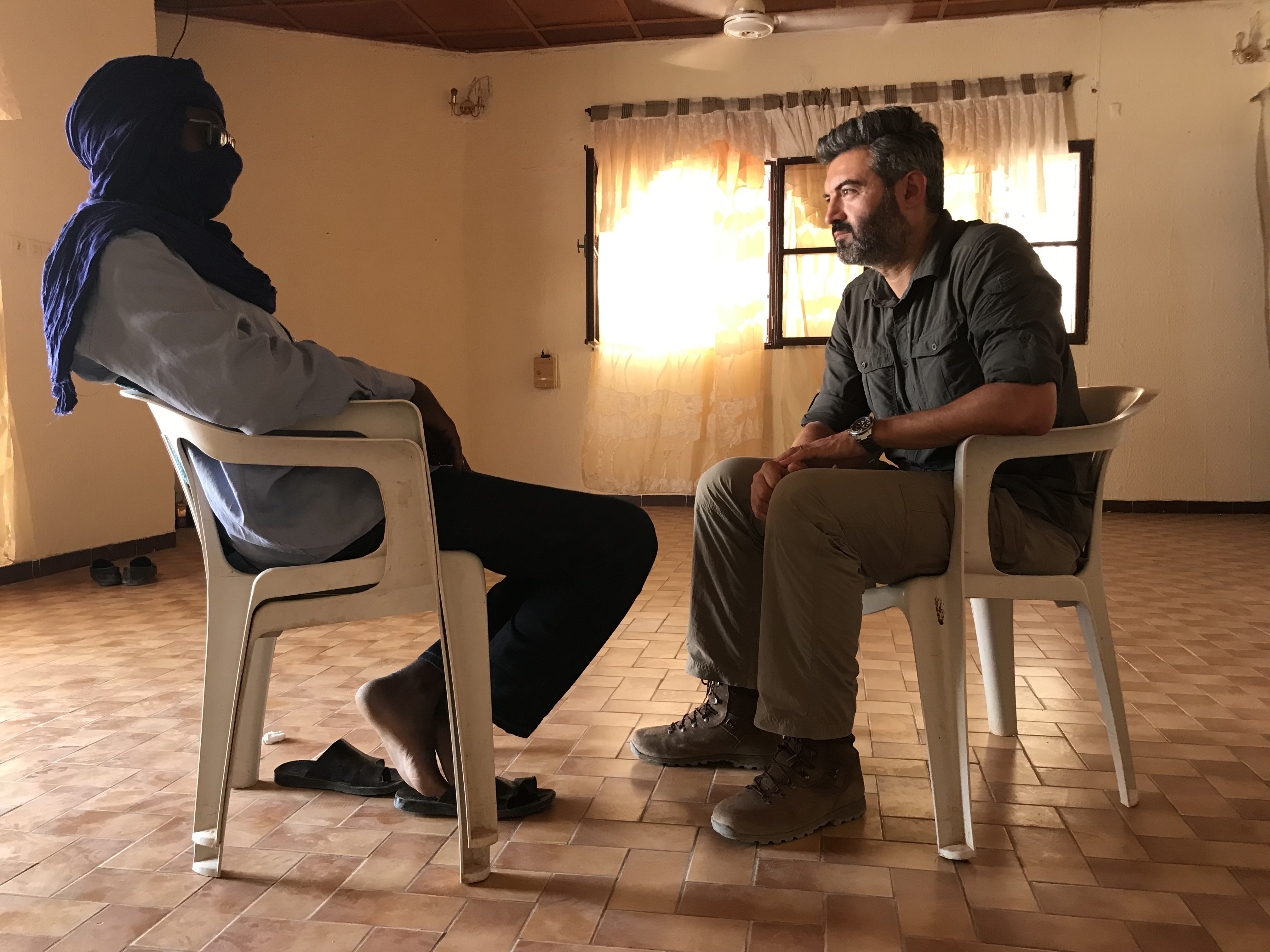 He added: “There's nothing to protect you. While you're there.

“Even if you took someone from special forces in the military, they wouldn't be able to help us. You're there, at the mercy of whatever is on the ground.”

Into the dangerous unknown

Reza, who is a mixture of Bear Grylls and Ant Middleton, is no stranger to dangerous situations having already cycled the Sahara Desert, visited Egypt in the middle of a revolution and travelled Senegal to Somalia and through the Amazon.

As a filmmaker, he tries to provide a platform for untold stories by giving a voice to regions that seem forgotten by the rest of the world. 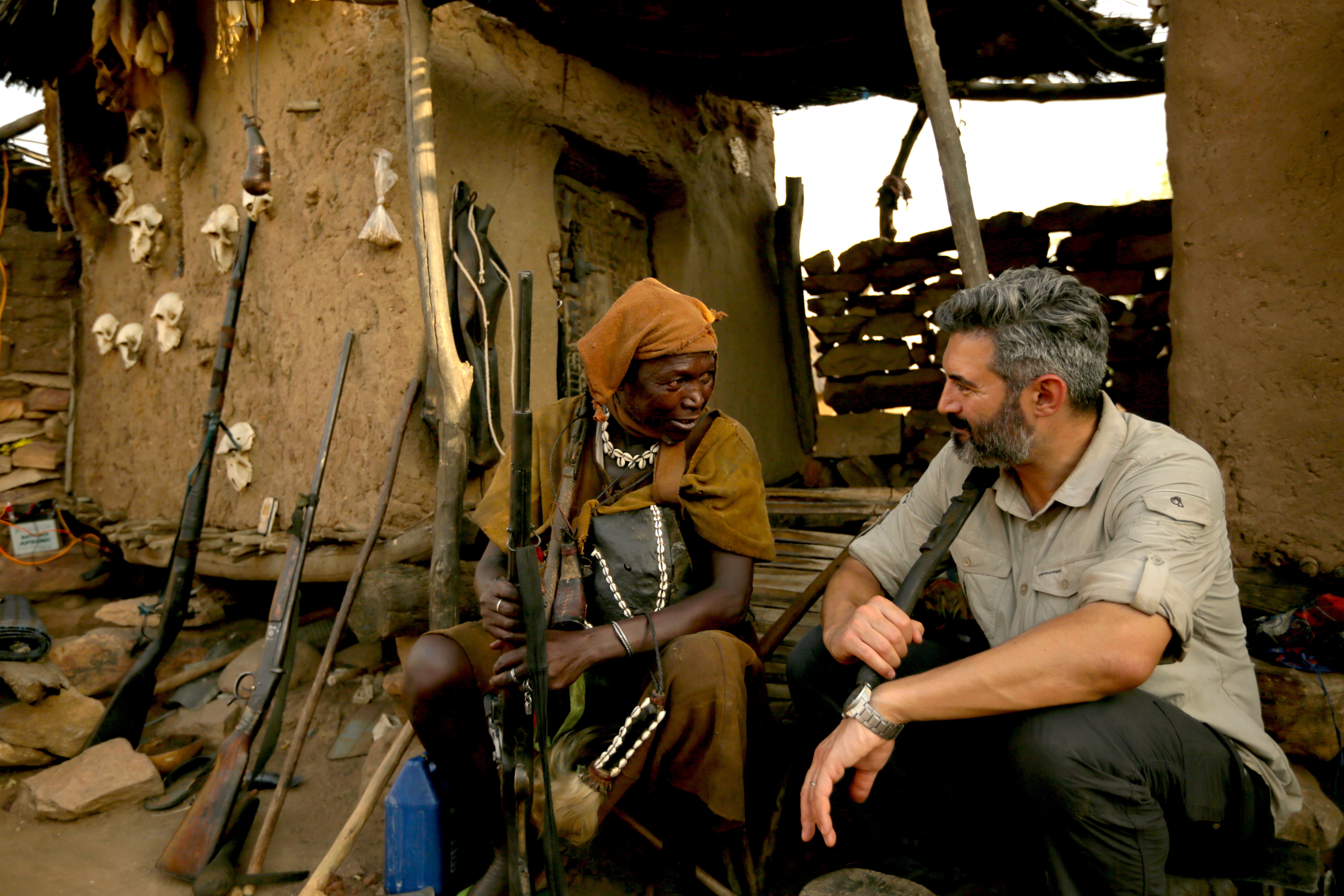 Reza spent time around armed men while travelling across the Sahelian Belt of AfricaCredit: Signature Films

But his latest trip is by far the riskiest he has ever undertaken and he admits he is reliant on local people to save him when he ends up in sticky situations.

He picked The Sahelian Belt, which stretches from Senegal on the Atlantic coast, through parts of Mauritania, Mali, Burkina Faso, Niger, Nigeria, Chad and Sudan to Eritrea on the Red Sea coast, purely because it is a dangerous unknown.

Reza hoped he would be able to take the camera into locations where filming had been banned to document the lives of African people at the mercy of terrorism, poverty and climate change.

Despite the danger he placed himself in, he succeeded and turned the footage into a new series. 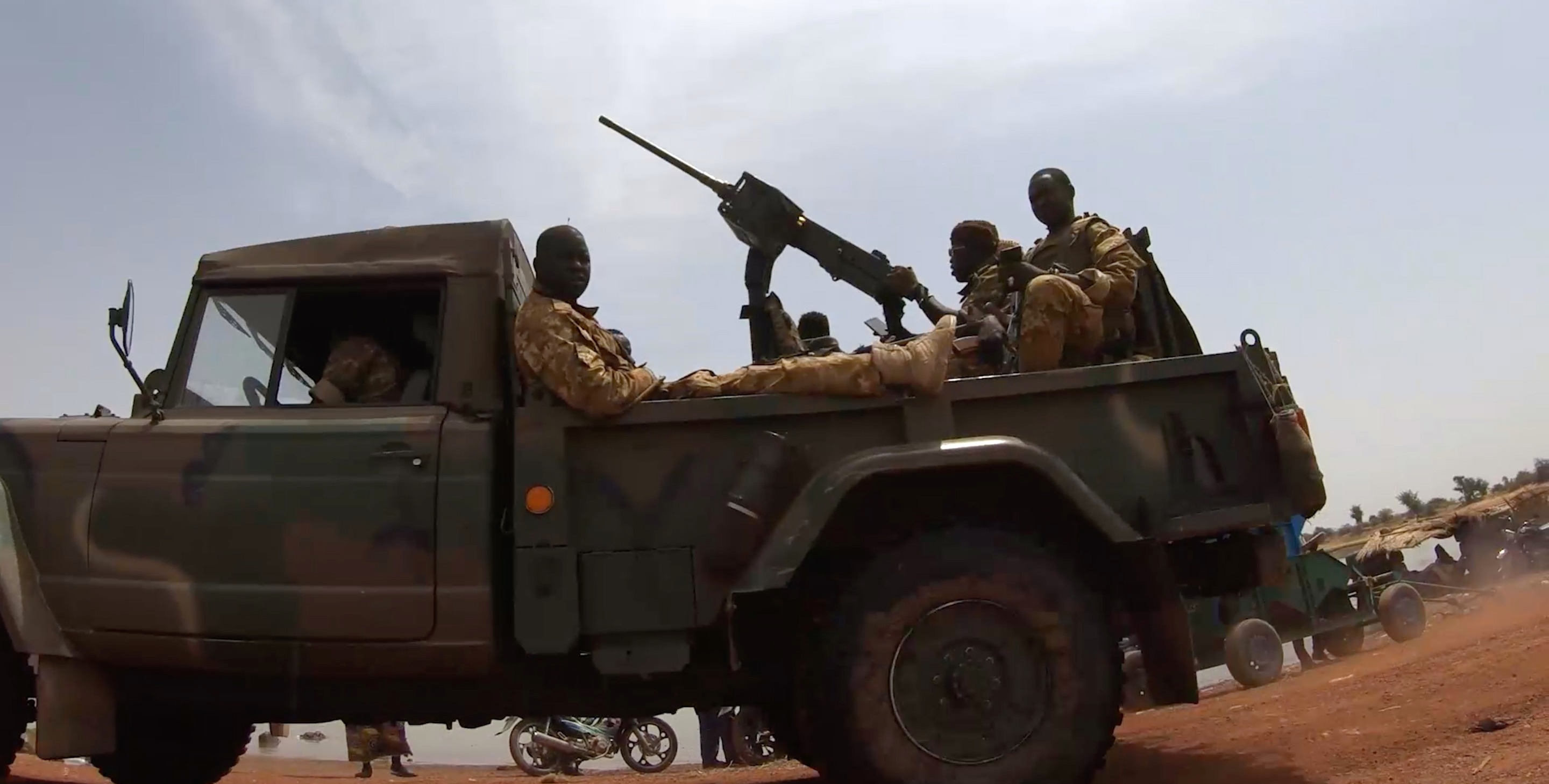 Reza's filming meant that his life was constantly in danger on the tripCredit: Signature Films

Throughout the epic journey, Reza constantly walked a thin line between life and death while filming for The World’s Most Dangerous Borders, out October 26.

Reza added: “I live for taking those risks and putting myself out there in those situations and finding the way out.”

He found himself facing the AK-47s after he followed two migrants to Agadez, Niger, which is the heart of the illegal people smuggling network – here a camera means death.

Despite his brush with death he persuades one human smuggler to sit down with him one-on-one – but it involves Reza being taken to an unknown location alone and leaving his phone behind.

Reza thought he might have walked into his own kidnapping when he met with dangerous people smugglersCredit: Signature Films

He admits: “I was picked up by a rickshaw at the rendezvous. It took me to the back streets of Agadez, where I was dropped off and then picked up by another one.

"Not a single word was exchanged. At some point, my eyes were covered and I was ushered into a building. I couldn't see a thing.

"In my mind, I began to analyse different scenarios. Could this be a trap? Was I being kidnapped?”

We were arrested, held at gunpoint a couple of times. That pattern repeated over and over again.

During their meeting the trafficker boasts: “A smuggler who has enough migrants can make up to 3million francs [just over £4,000] a week.

“Now there is a law preventing it but then ones who risk it can make double that amount.”

But this isn’t the first time he finds himself staring down death at the hands of violent thugs. 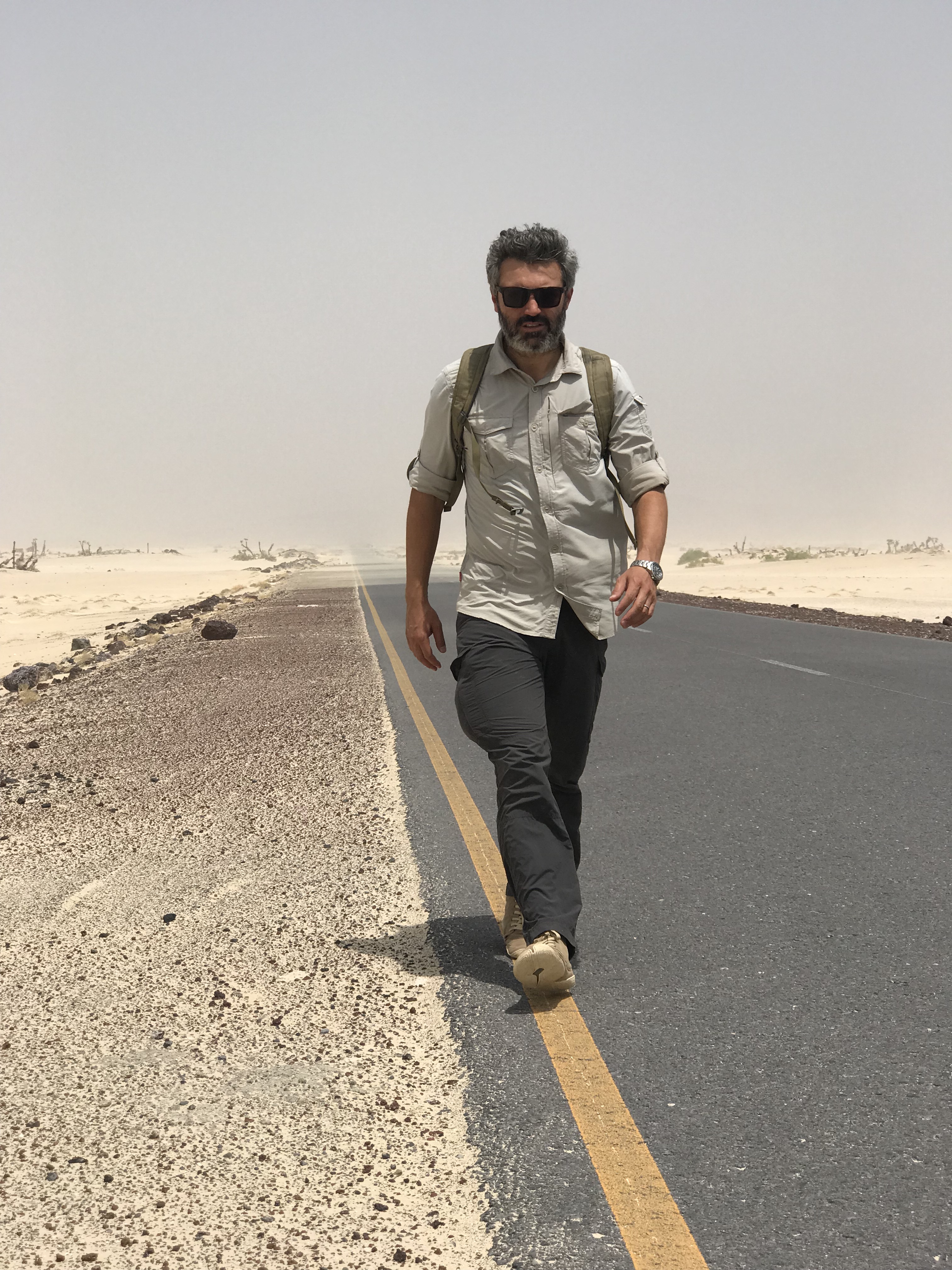 Within minutes of first appearing on screen, he is penned in by terrorists Al Qaeda – who carried out the 9/11 hijackings – and the violent Malian military who are having a dispute over territory.

He said: “We were trapped, on one side was a river and our barge was broken so we couldn't cross the river, and then on the other side were Al Qaeda militants, taking over a town, and the Malian army just got behind them, on the other side. They were about to go and fight Al Qaeda.

“It was a hairy situation, and that situation happened throughout the journey. We were arrested, held at gunpoint a couple of times. That pattern repeated over and over again.”

Reza is the first person to film in the region in more than 20 years, as journalists have been exiled from the majority of the African countries along the Sahelian Belt.

Being a foreigner ensures that he stands out like a sore thumb and brings him to the attention of militants. 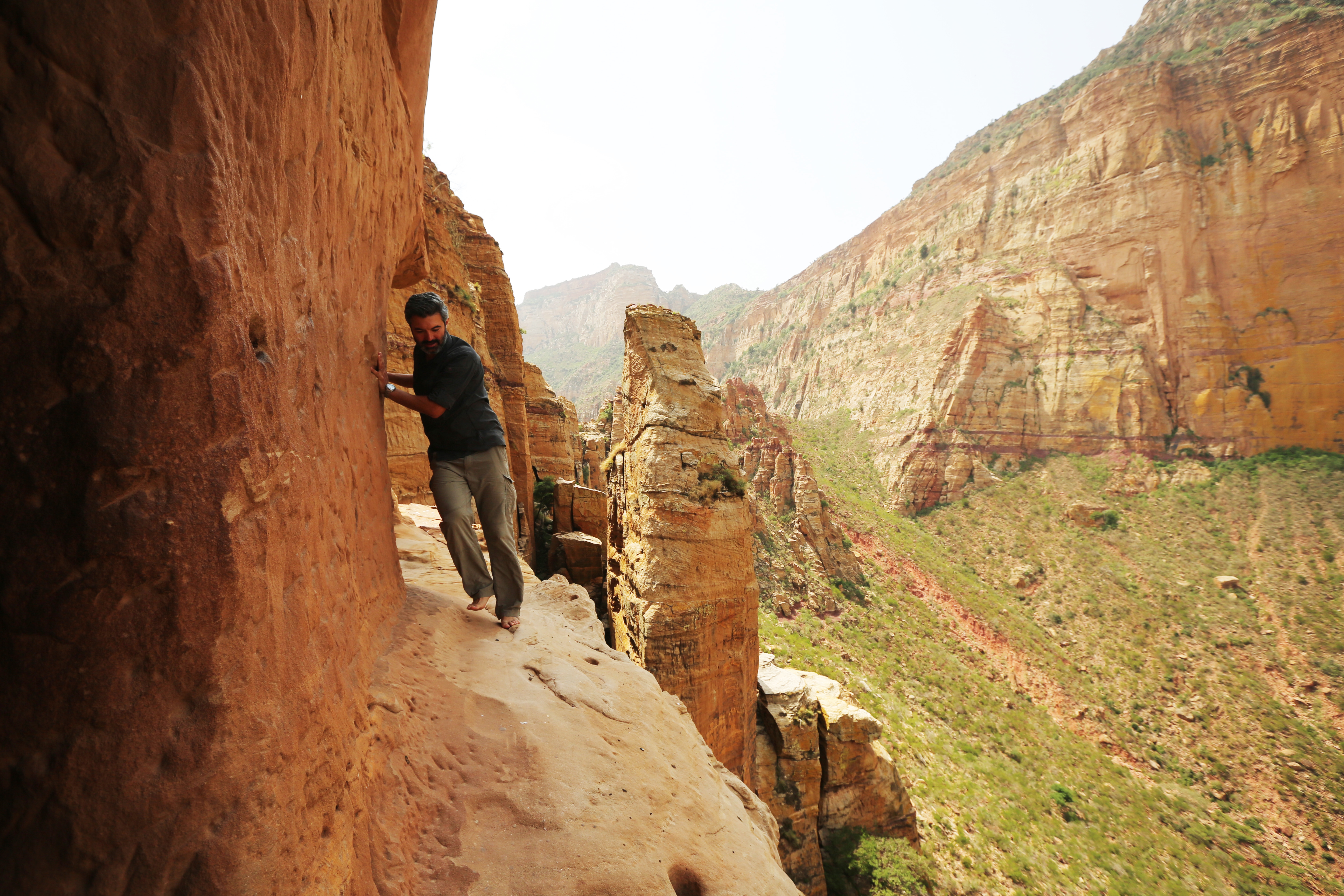 Reza was conspicuous as a foreign journalist during his travelsCredit: Signature Films

When he arrives in Sudan he is arrested by the military, his phone confiscated and jailed in Darfur despite having the correct permissions to be there.

With no contact to the outside world, Reza and his team had no idea where they were incarcerated and were constantly monitored while under arrest.

Reza said: “I had never experienced anything like this before in my life.

"Fear of the unknown chipped away at my confidence bit by bit. I was truly isolated, as if I were the last person on earth.

"My wife was pregnant back home and I couldn't get in touch with her to tell her what was going on. 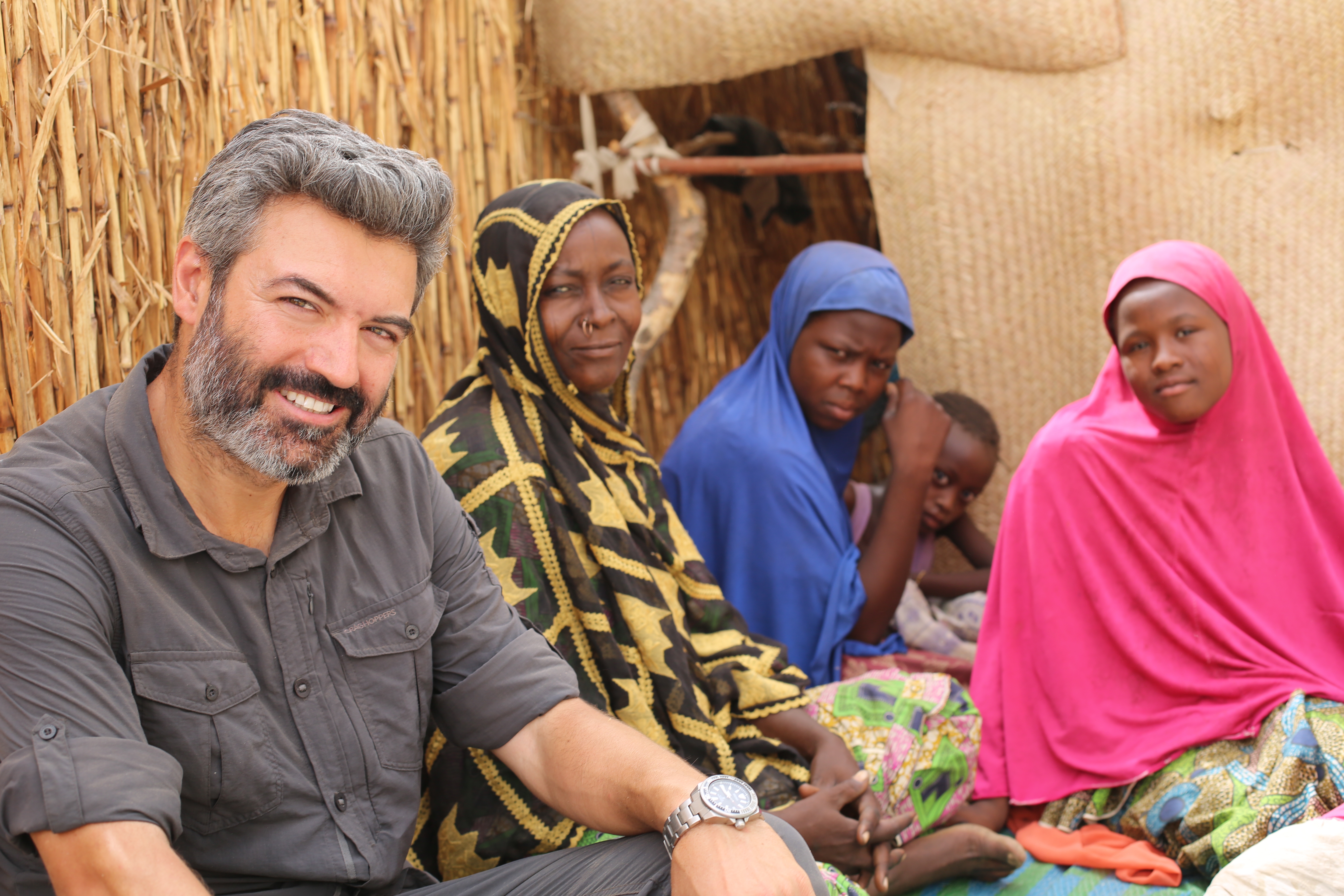 Reza feared he would never see his own family again when he was imprisonedCredit: Signature Films

“I felt hopeless. The only person that I could talk to was Mark, my cameraman, who was suffering with salmonella and vomiting his guts out.

"Guilt overwhelmed me every time I looked at him – after all, it was me who had brought him here, into this horrifying situation.”

'Pretty sure they are watching us'

In order to be set free they were entirely reliant on their own wits.

He continued: “They took away our passports, we were put in a convoy. The military was really friendly but the Sudanese intelligence service wasn’t. 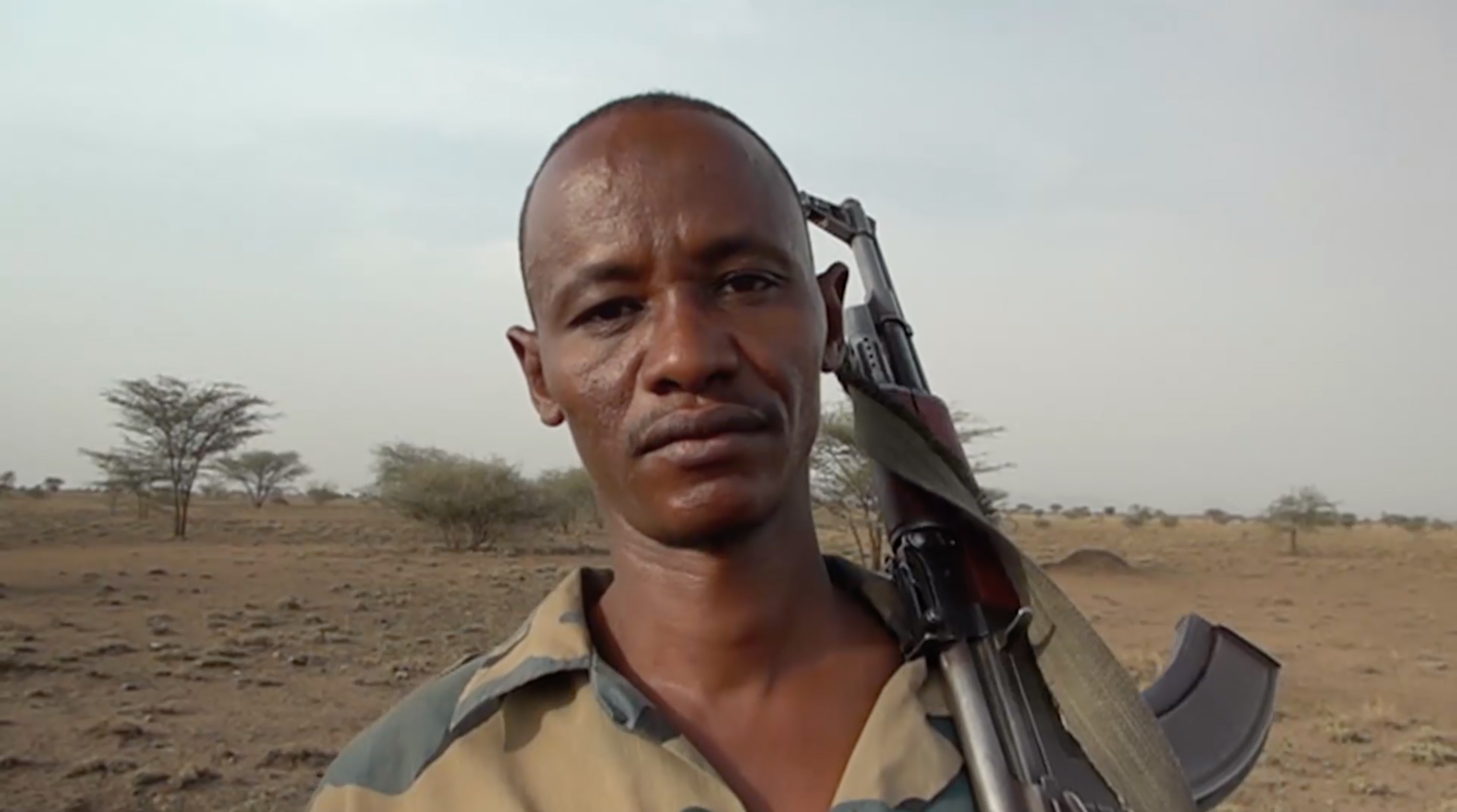 Armed forces were a constant source of danger for Reza's tripCredit: Signature Films

“When we were taken to the barracks they took away all of our belongings and we were interrogated by the Sudanese intelligence service for hours and hours."

Incredibly he was able to smuggle a GoPro into the jail and film during his time inside because they "didn't body search" him.

The footage from inside shows a room with broken windows and two single beds covered with dirty bedding.

After two days of negotiations, they were granted a bucket to use as a shower in a courtyard outside their room while being watched by guards. 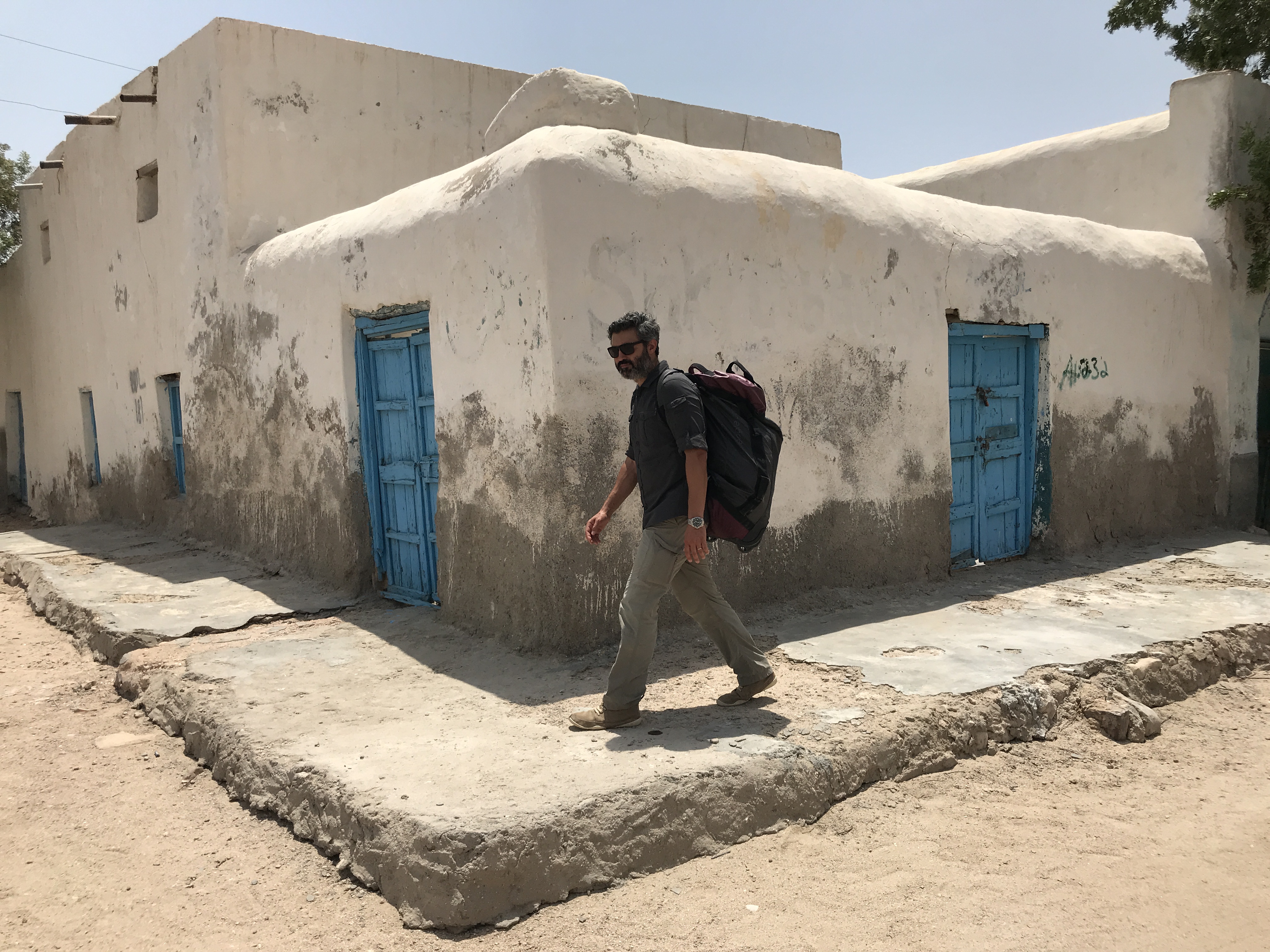 Guards took all of Reza's possessions away from him while he was inside the jailCredit: Signature Films

The constant questioning was over their purpose in Sudan, with officials saying “we don’t do journalism” after they removed all media from the state more than 20 years ago.

Thankfully, they were not tortured and their equipment was returned and they were taken to the capital Khartoum.

During the show Reza says: “We are absolutely paranoid. We are pretty sure they are watching us.

"They know our whereabouts. This is not the Sudan I remember. I have never been treated in Sudan like this.”

While the country burnt in civil war, Reza witnessed the military opening fire on civilians as they attempted to quash the revolution – with hundreds killed and their bodies thrown into the river.

Before embarking on the mammoth trek of more than 3,500 miles, Reza spent two years building up a team of local guides to take him through the borders and introduce him to the people living in poverty. 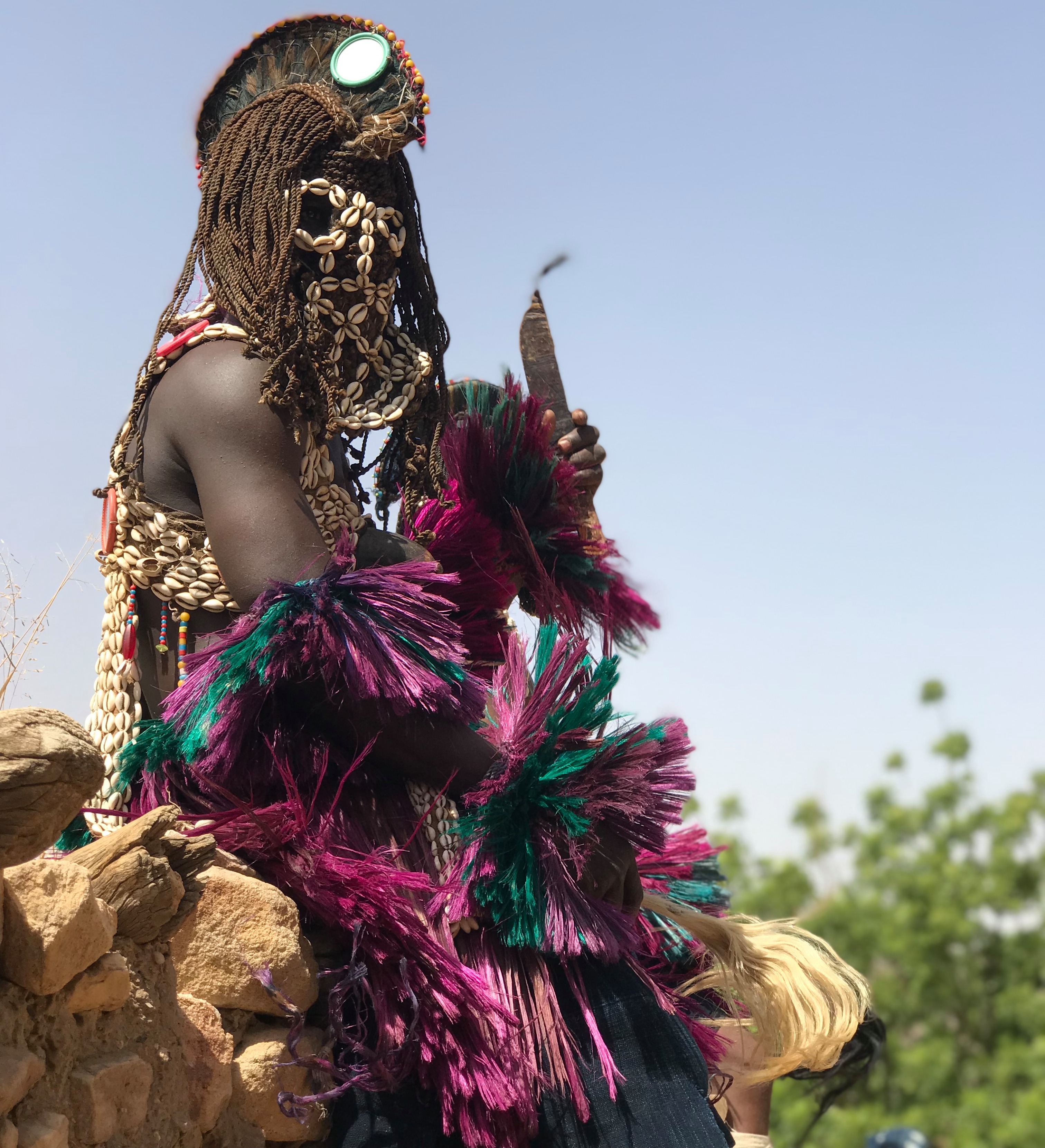 Reza wanted to share untold stories from people who have been overlookedCredit: Signature Films

It enabled him to get up close and personal with communities in Mali searching for gold – which his guide described as modern slavery – and Bancomana sand-fishermen who are tasked with digging up a specific type of sand to make bricks.

Another local tradition he experienced was in Harar, Ethiopia, where he hand-fed wild hyenas – his guide fed them from a stick out of his mouth.

Reza recalled: “Hyenas came towards us, their eyes luminescent in the dark. Their white sharp teeth, like rows of daggers, reminded me of Tanzania, where I had been chased by hyenas and only just managed to escape.

“I began to shake. If they chose to, they could eat me alive in a matter of minutes. 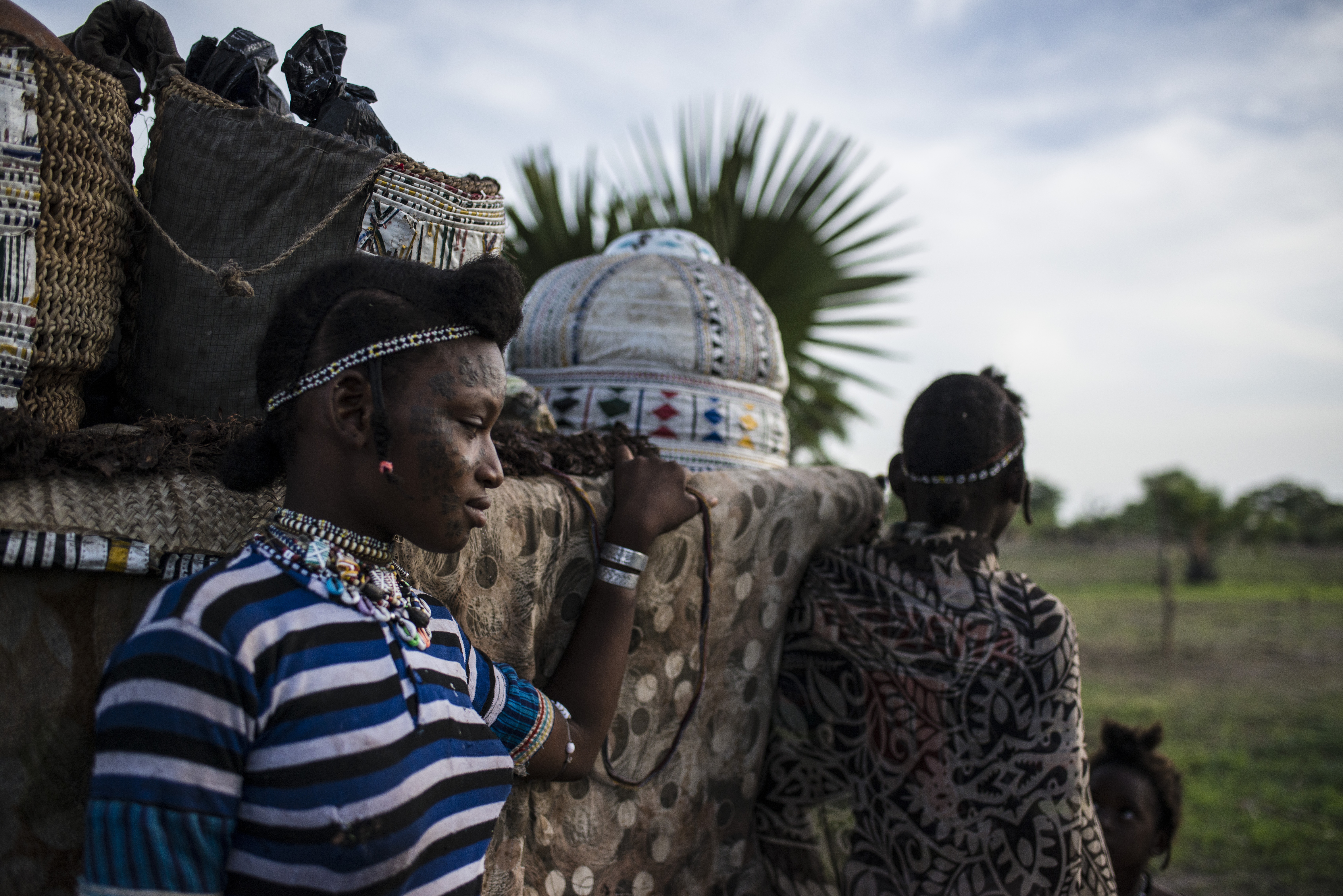 "I was starkly vulnerable, but I had to trust the hyena man. He was in control. He and his family had been feeding the hyenas for centuries. He knew what he was doing.

“When I was told that it was my turn, I picked up a piece of goat meat. My hand shook so fiercely that it was a struggle to hold it.

"Adrenaline coursed through my veins. The hyena was just a metre away from me. I showed it the meat. It leaned forward and opened its mouth.

It makes my heart race every time I think about it.

“I closed my eyes, waiting for the bite which would rip my hand off... But when I opened my eyes again, I was still intact. The hyena was happily chewing on the meat, and I was safe.”

The locals claim the tradition has ensured the wild dogs haven’t ever attacked a local because they are well fed.

One of his highlights during the trip was experiencing a local festival in Djenne, Mali ahead of the rainy season.

He said: “It was Glastonbury slash Notting Hill Carnival in Mali. 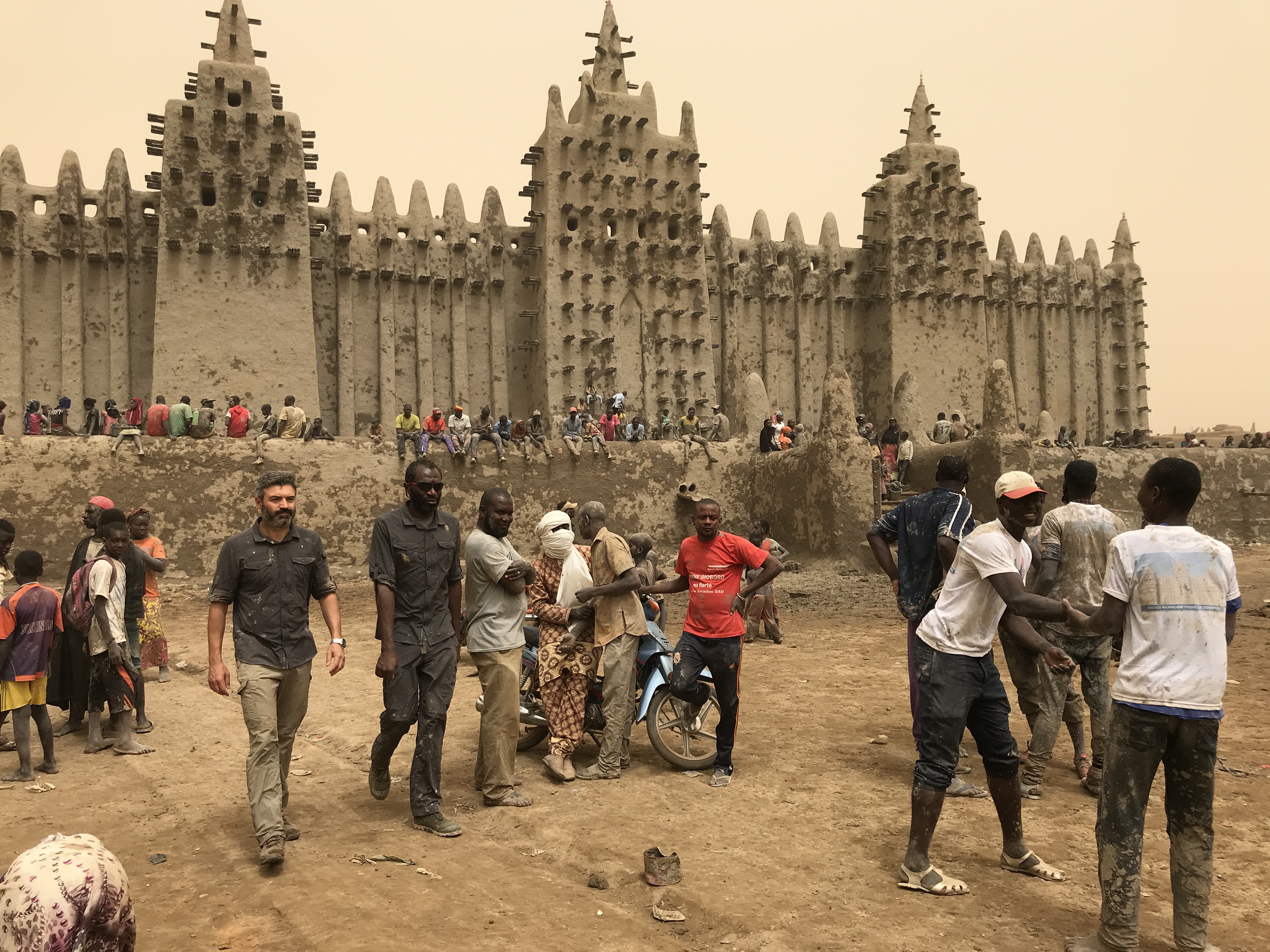 The Great Mosque of Djenné in Mali is the biggest mud structure in the worldCredit: Signature Films

“Three days of non-stop celebration partying. They have a mosque, which is located in the centre of Djenné.

"It's the biggest mud structure in the world. And every year, just before the rainy season, the people of the town prepare the Mosque, and around the town they built a mud pit and men and women come together.

My son, 15, was groomed by drug gangs - Covid could lead to more 'lost' kids

“Thousands upon thousands of people come together and pour mud all over this mosque and after the building is finished they party like there is no tomorrow.

"It was something that I will take with me forever. It's a moment I will never ever forget. It was beautiful, enigmatic and atmospheric.

"It makes my heart race every time I think about it.”

The World's Most Dangerous Borders is out on October 26 on all digital platforms.