A VOLCANO erupted in Iceland tonight after the isolated island was rocked by 50,000 earthquakes in just three weeks.

The Fagradalsfjall spout suddenly burst into life spewing lava and ash and leaving a bright red plume hovering in the skies over Reykjavik. 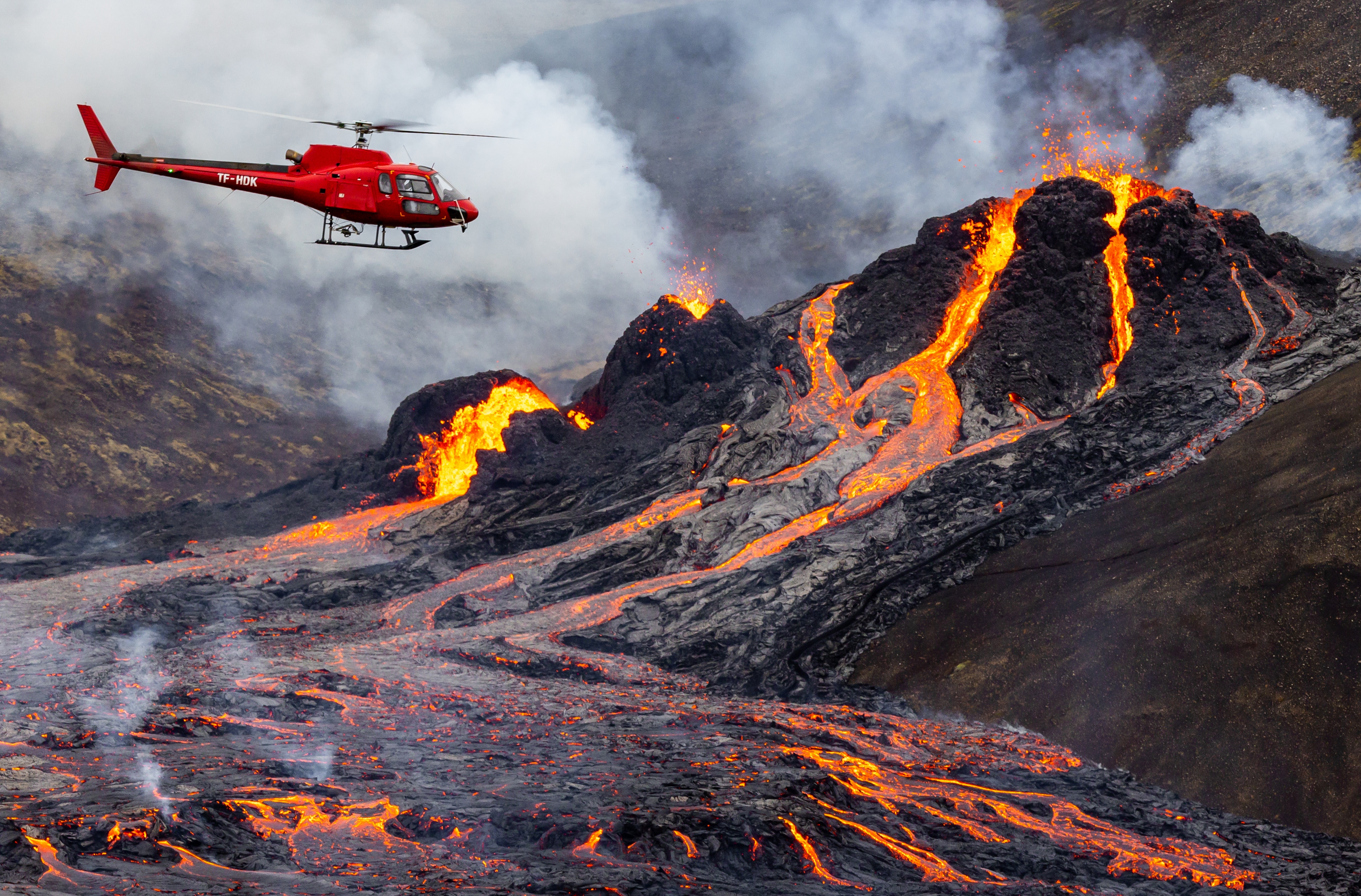 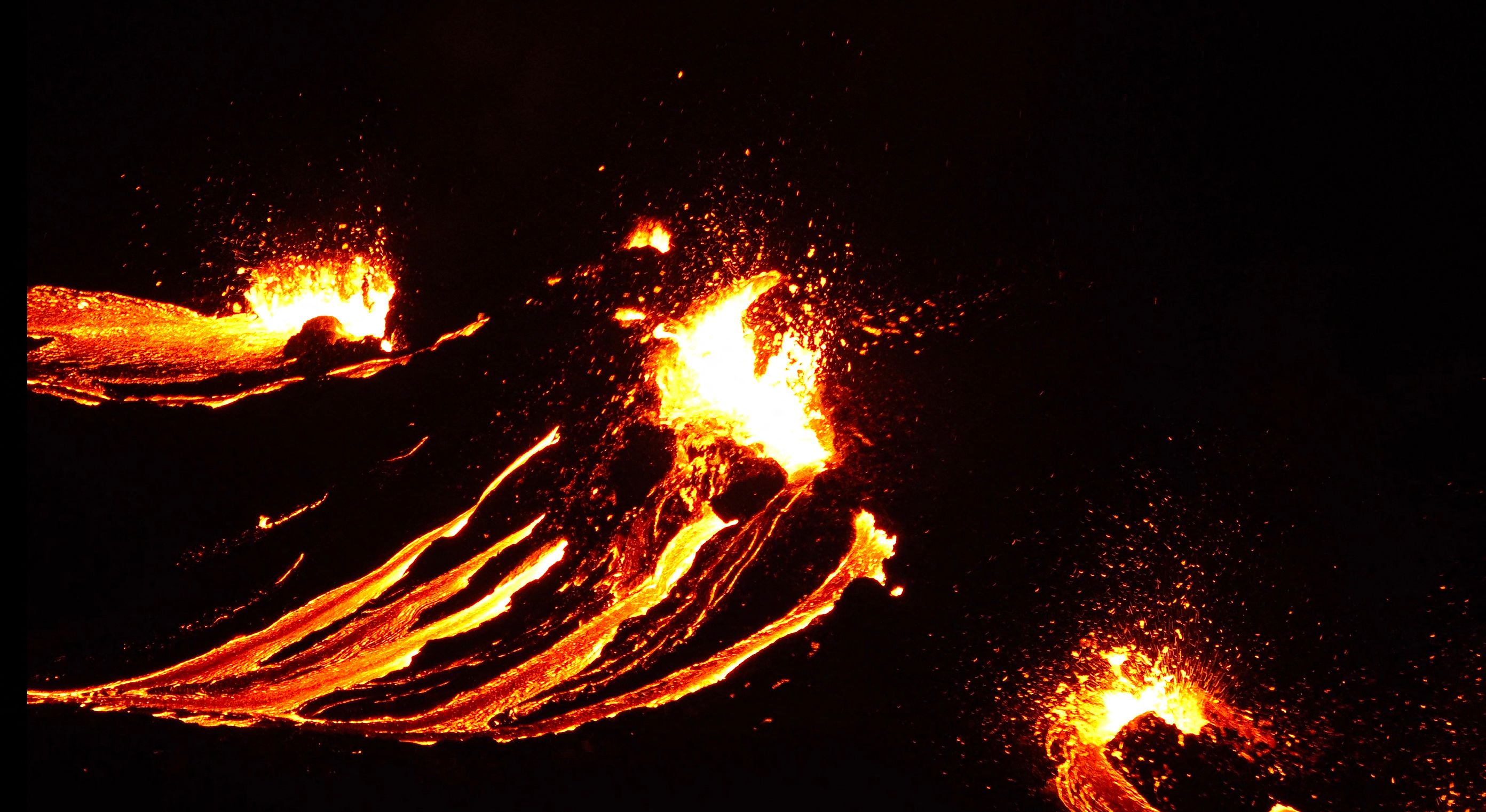 A half-mile fissure opens up just 25 miles from the capitalCredit: AFP 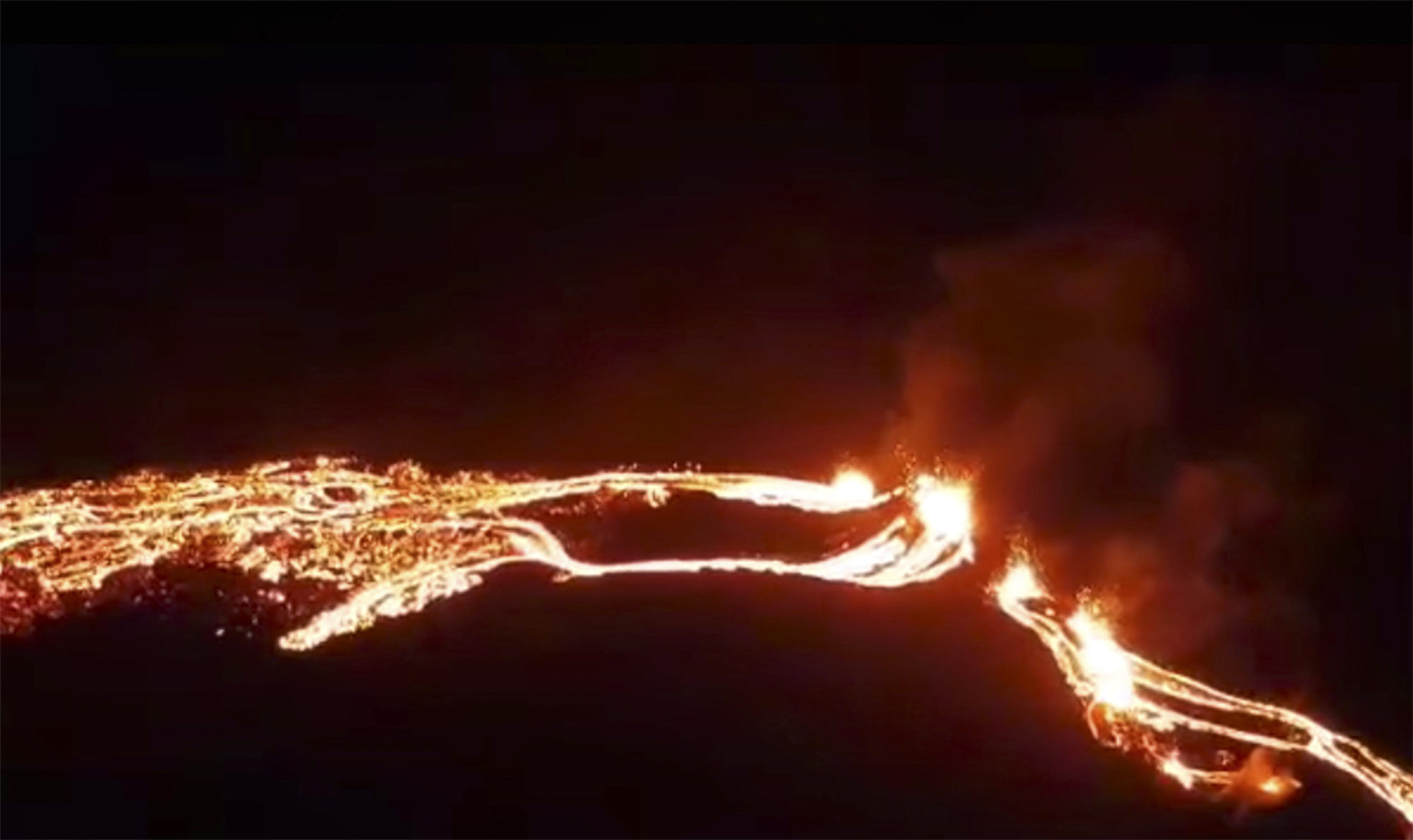 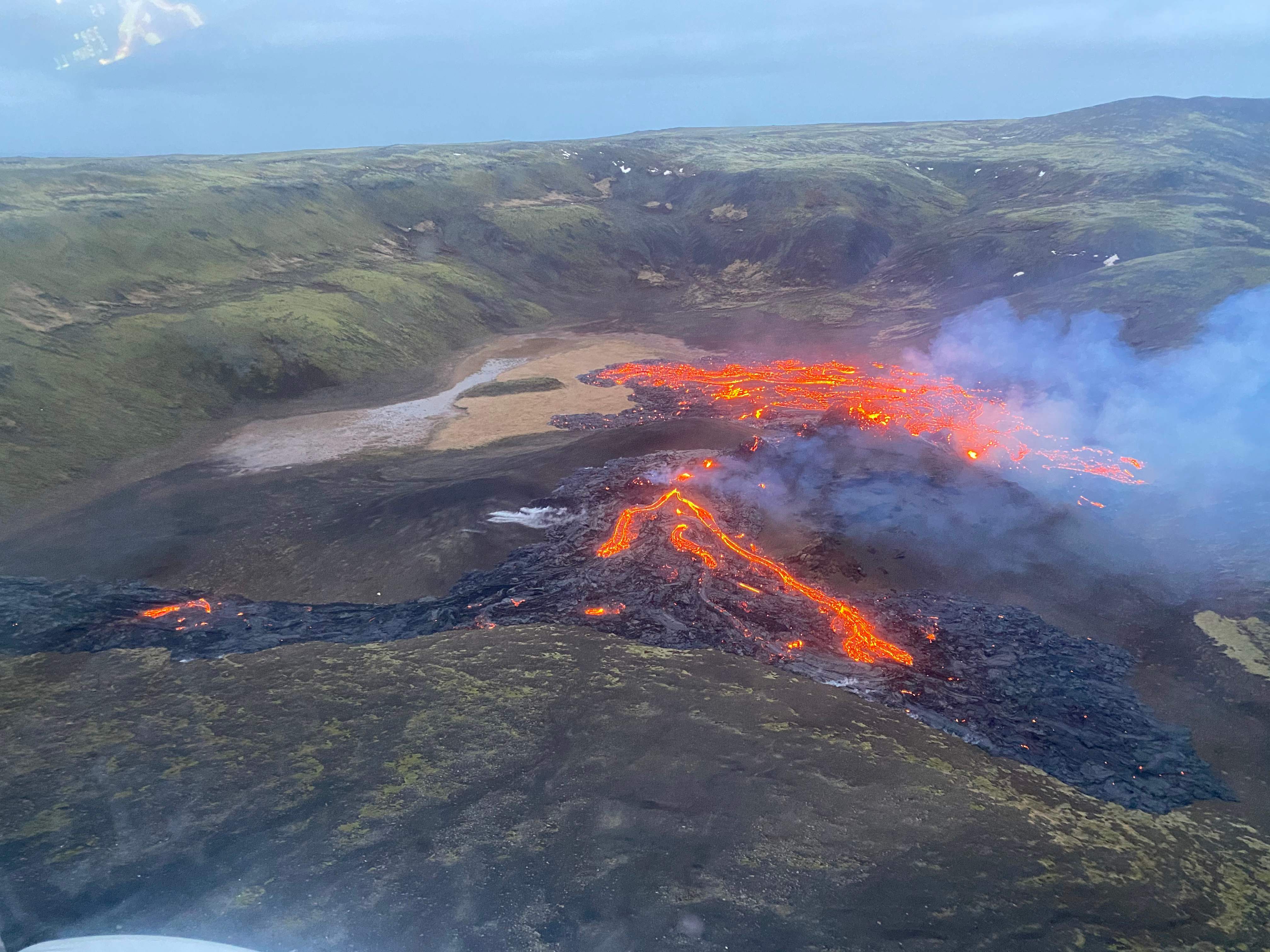 A picture taken by the Icelandic Coast Guard shows the lava flowing from the erupting Fagradalsfjall volcano some 40 km west of the Icelandic capital ReykjavikCredit: AFP

The volcano, located southwest of the capital, is in a seismic hotspot which has been hit by tens of thousands of tremors in recent weeks.

A magnitude 3.1 earthquake was recorded less than a mile from Fagradalsfjall just hours earlier.

All inbound and outgoing flights from Keflavik International Airport have now been halted.

In 2010, the eruption of another Icelandic volcano, Eyjafjallajokull, brought air traffic to a halt across Europe.

"Volcanic eruption has begun in Fagradalsfjall," the Icelandic Met Office revealed in a tweet.

"Flight colour code is red but very little turbulence is seen on the seismometers." 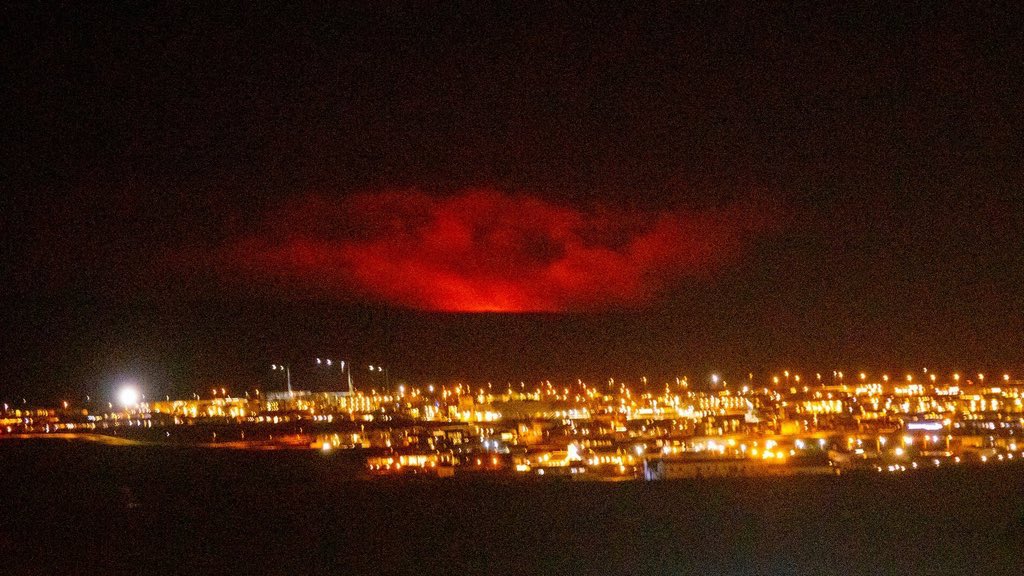 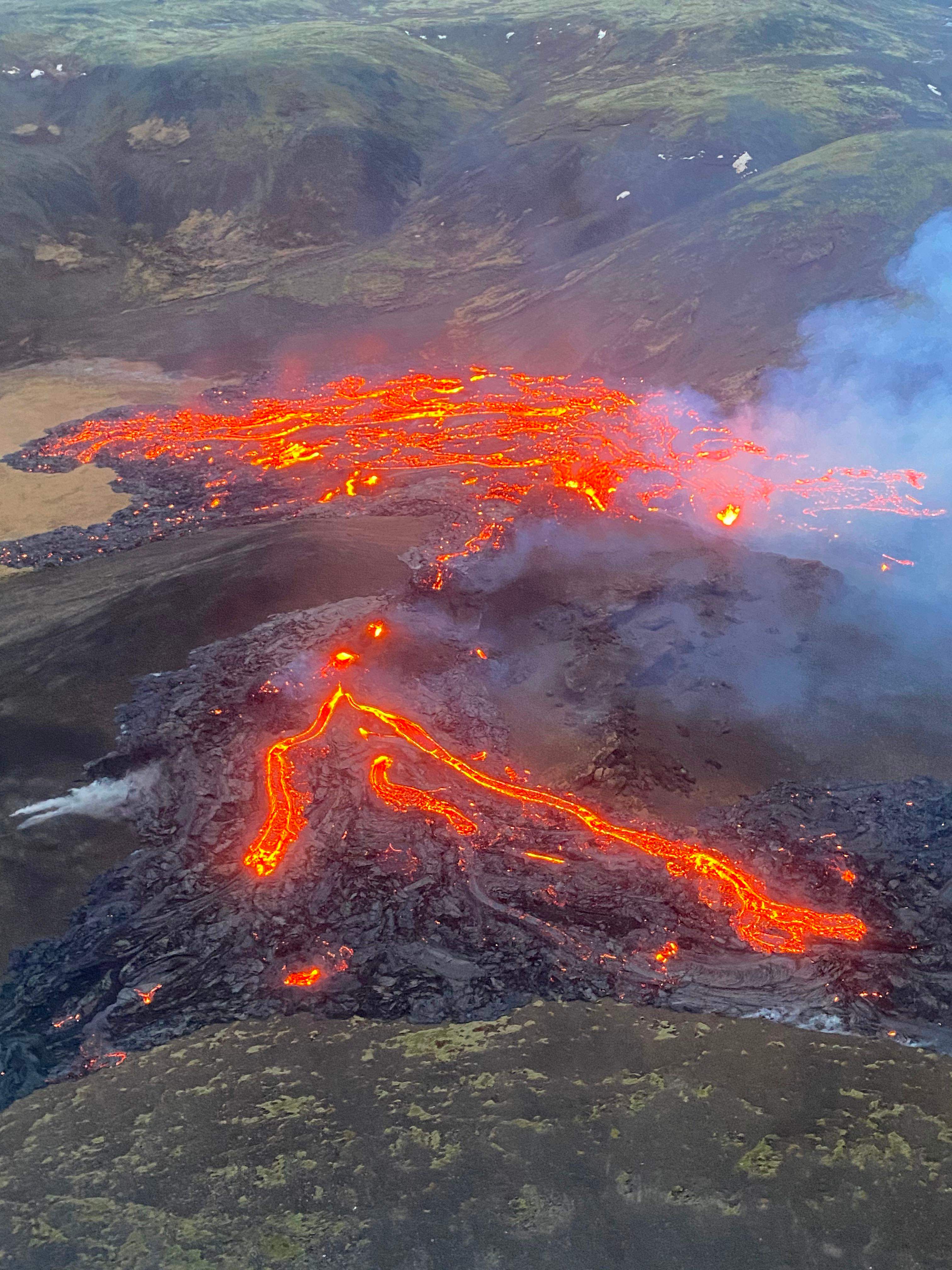 The volcano is in a seismic hotspot which has been hit by tens of thousands of tremors in recent weeksCredit: AFP 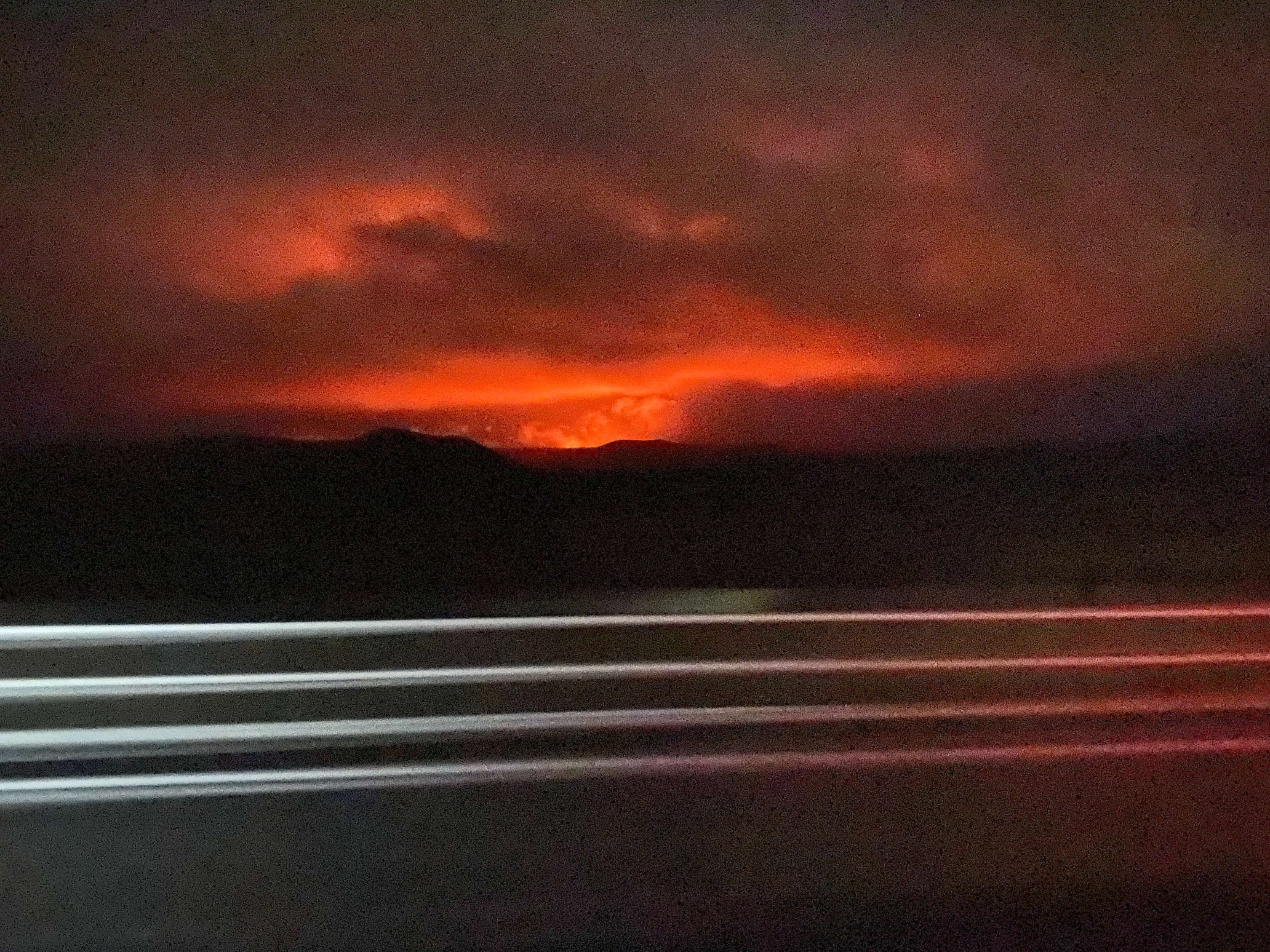 Icelandic police said on Twitter: "We ask people to stay calm and not under any circumstances go close to the eruption site.

"First responders need to be able to drive freely to assess the situation. Scientists are working on assessing the eruption."

Fagradalsfjall is in a valley located about 20 miles away from Iceland's biggest city.

A helicopter with scientific personnel had been scrambled to assess the extent of the eruption, the Met Office said.

People living in the area have recently been advised to be extra careful due to dangers of landslides and rockfall.

Many of the larger earthquakes have even been felt in Reykjavik - where over half of the population lives.

This has led to heightened concerns about the effects of even larger equakes and also of a possible eruption from the Krýsuvík volcanic system in the area. 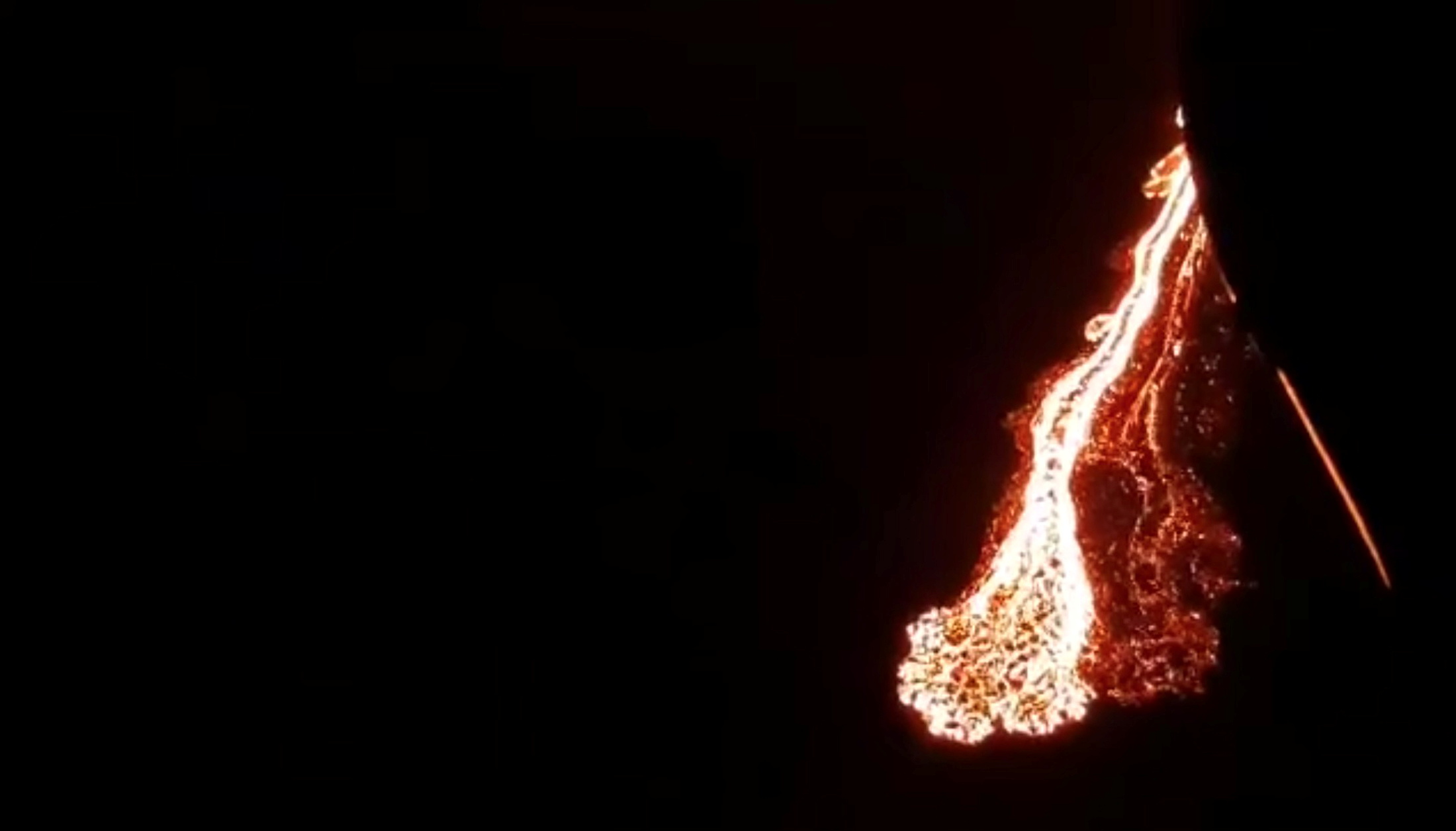 All inbound and outgoing flights from Keflavik International Airport have now been haltedCredit: Reuters 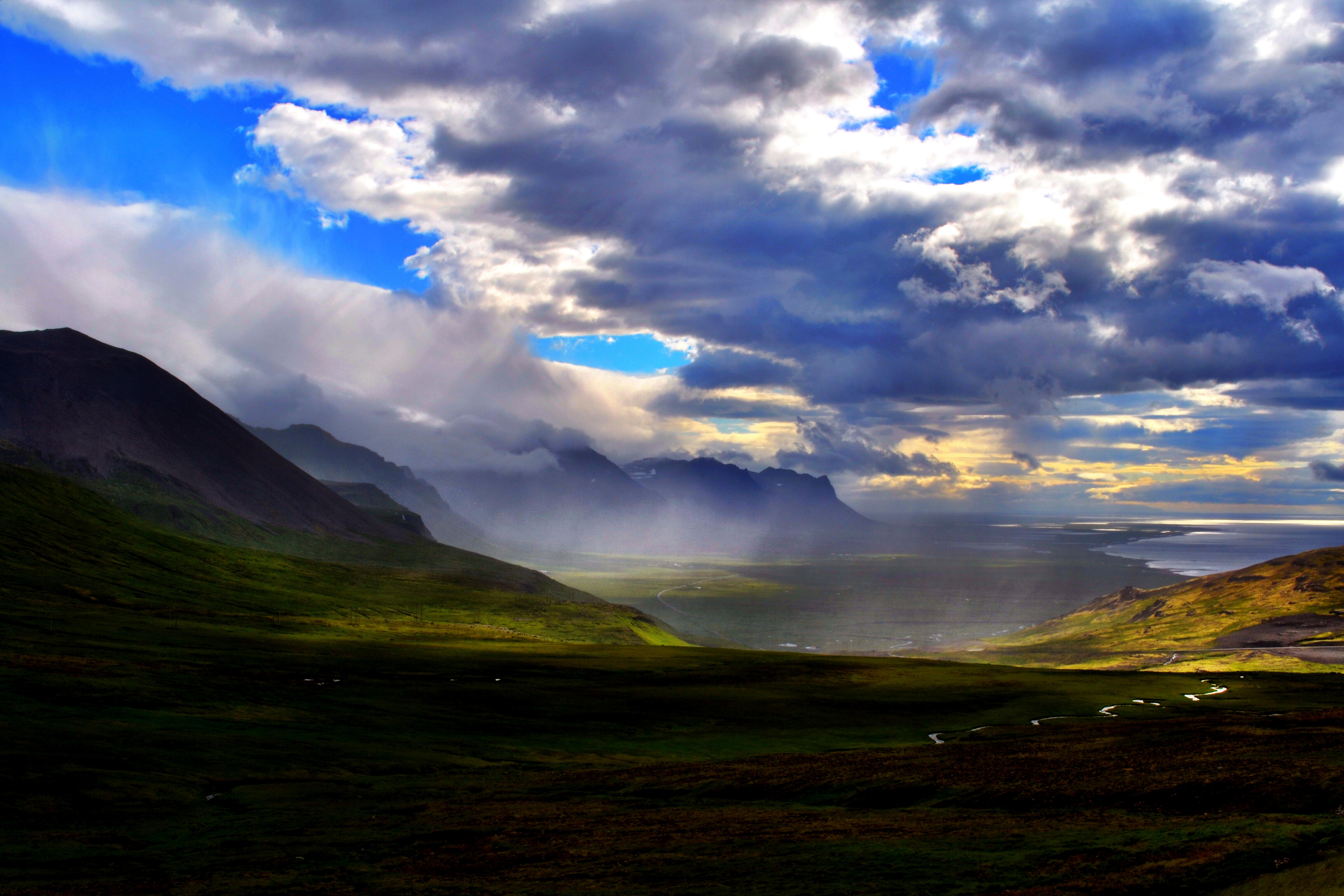 A panoramic view of Fagradalsfjall along the western side of IcelandCredit: Alamy 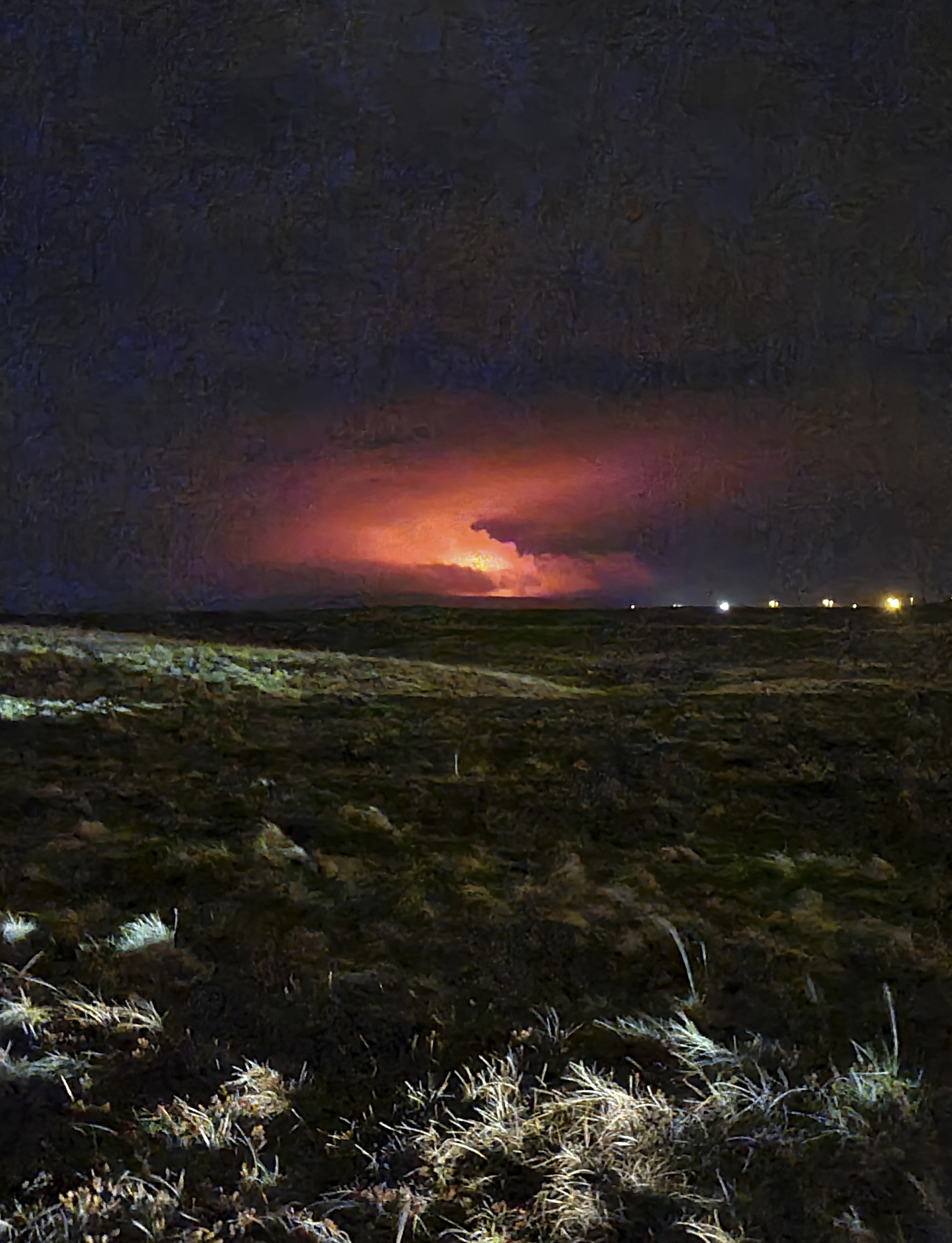 The red skies could bee seen for miles aroundCredit: AP

South-west Iceland has a track record of centuries of calm, which can be broken by turbulent periods of intense earthquake activity accompanied by volcanic eruptions.

The most recent earthquake swarm is in fact the latest in a period of significantly heightened seismic activity that started over a year ago.

The shaking of the Earth is the most obvious manifestation of the release of huge amounts of energy.

But magma has also been quietly accumulating nearer to the surface – and when this happens there is increased likelihood of the surface breaking and the volcanoes erupting. 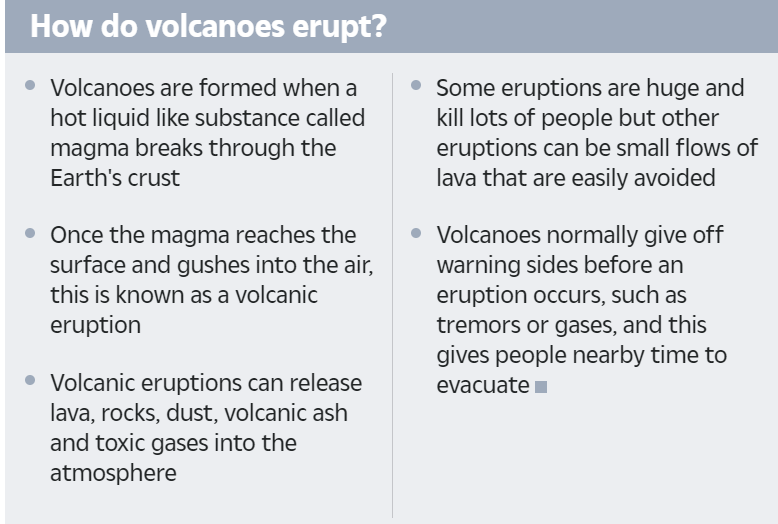 On March 3, concern rose sharply as a type of earthquake activity characteristic of the movement of magma was detected, indicating that an eruption might be imminent.

The Civil Defence and other authorities have held press conferences, closed roads and heightened visual surveillance of the area above the potential eruption site.

The biggest concern internationally about a volcanic eruption in Iceland is disruption to air travel.

Not only can winds carry ash clouds swiftly towards western Europe but ash clouds can get high into the atmosphere and into the stratosphere where commercial airlines travel across the busy Atlantic flight corridors.

But the volcanoes in south-west Iceland tend not to produce much ash, and so the risk to disruption of international air travel is considered very small. 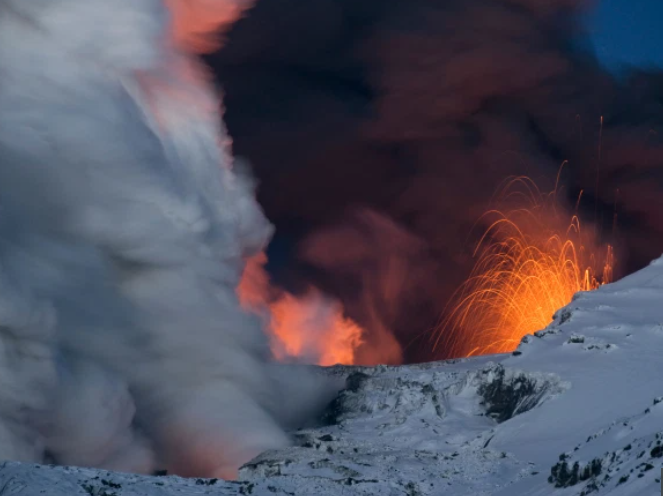 Iceland is a volcanically active region with frequent eruptionsCredit: alamy 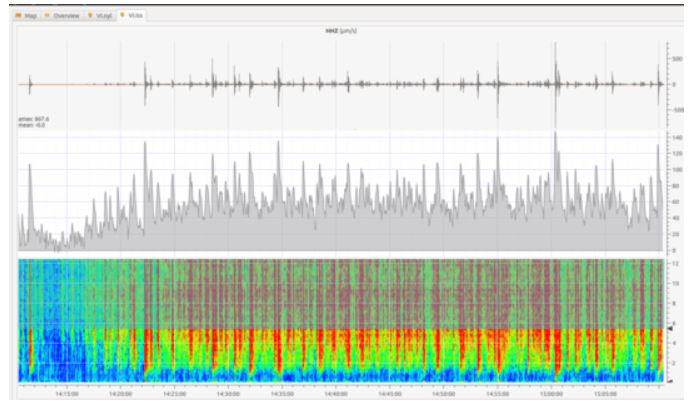 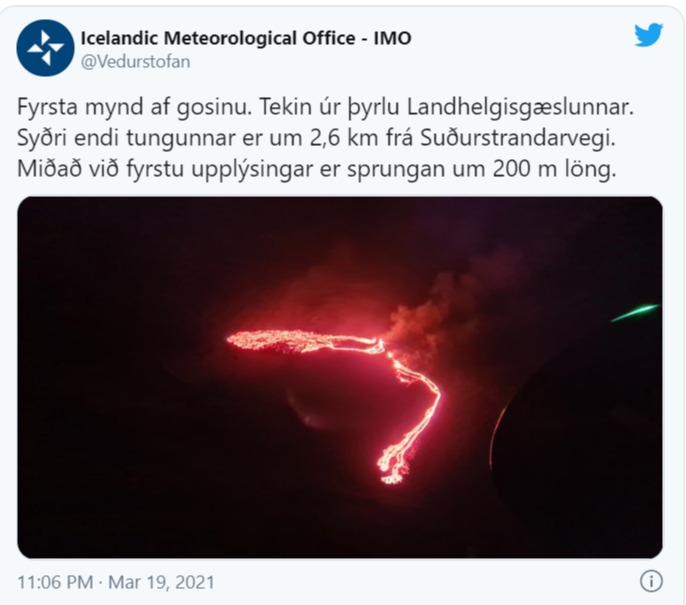 News of tonight's eruption will revive memories of the Eyjafjallajökull eruption a decade ago.

Then, the volcano spewed so much ash into the atmosphere that it led to the closure of most of Europe’s airspace for days, leaving holidaymakers stranded.

That eruption also strangely spurred the decade-long tourism boom for the island that was only ended by the Covid-19 pandemic.