Inside murky world of Britain’s monkey trade with up to 5,000 pets ripped from mums, kept in bird cages & starved

SITTING in a tiny bird cage, strewn with faeces, marmoset Clydie is suddenly yanked sideways by the tight leather collar around her neck as her newborn baby is ripped from her back.

Within weeks the adult monkey, who shares her tiny cage with mate Charlie in a living room in Camden, will be pregnant again - her babies torn from her months before they are ready, to be sold on for up to £2,000. 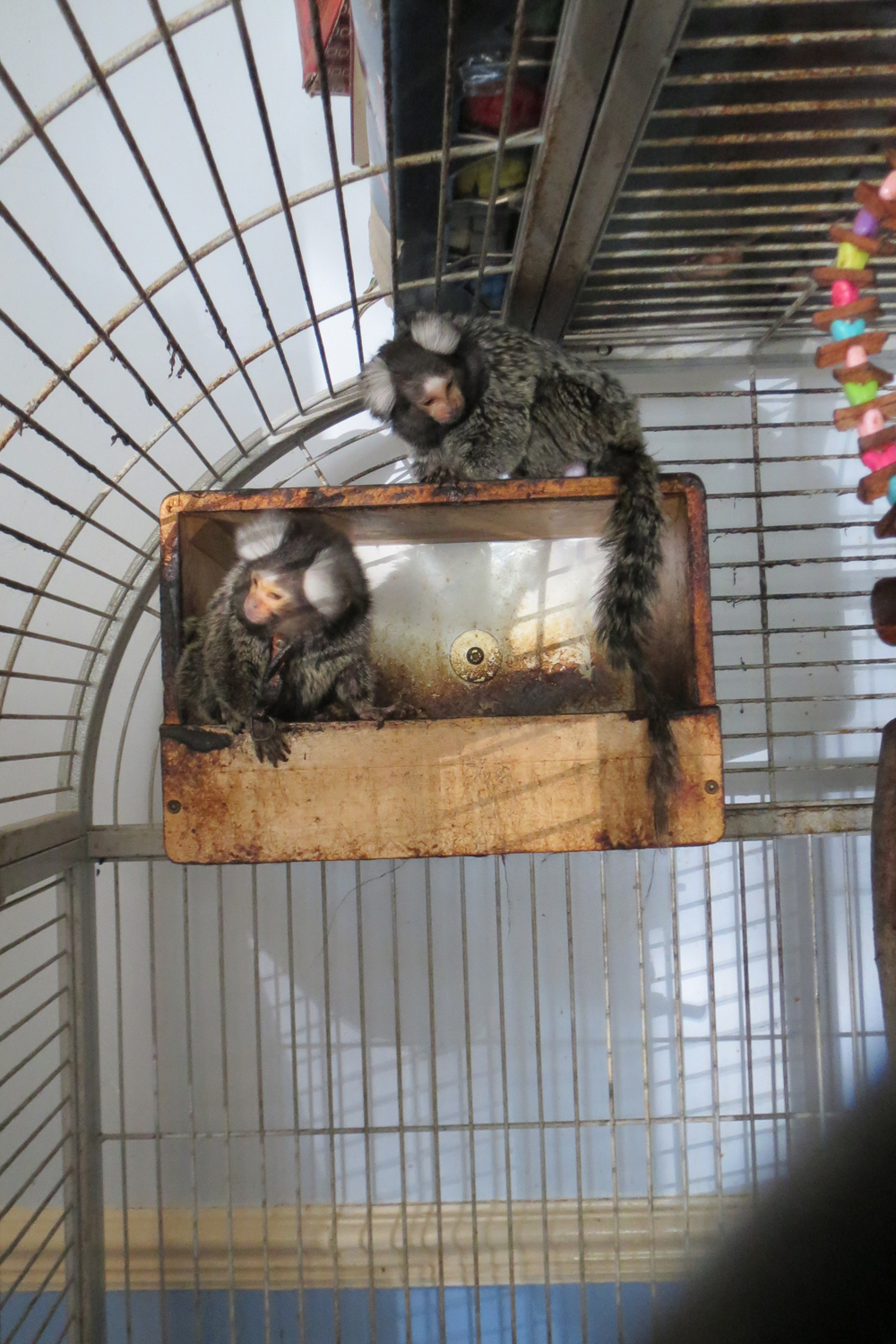 Clydie and Charlie were kept inside a cage and constantly bredCredit: Monkey World

Charlie and Clydie are just two of the estimated 5,000 monkeys kept legally as pets in the UK, where anyone can buy or breed them.

Marmosets are the most commonly held primates while capuchins, squirrel monkeys, lemurs and tamarins are also popular species.

Last month, the government announced proposals to ban the keeping of primates as pets, with animal welfare minister Lord Goldsmith saying many of them are in "misery" due to a lack of space and stimulation.

The eight week consultation on the ban ends on February 6, with the public able to air their views on the DEFRA Website, and it's a move the RSPCA and animal lovers have been behind for many years.

“You need a licence for primates classed as dangerous, like ring tailed lemurs and capuchins, but they're not the most popular species,” says Dr Ros Clubb, senior scientist at the RSPCA.

“With marmosets, tamarins and squirrel monkeys there's no licencing requirement so you can buy a monkey as easily as buying a hamster.

“But people really don't know what they're taking on and in a domestic setting, it's just not possible to give them a good life.” 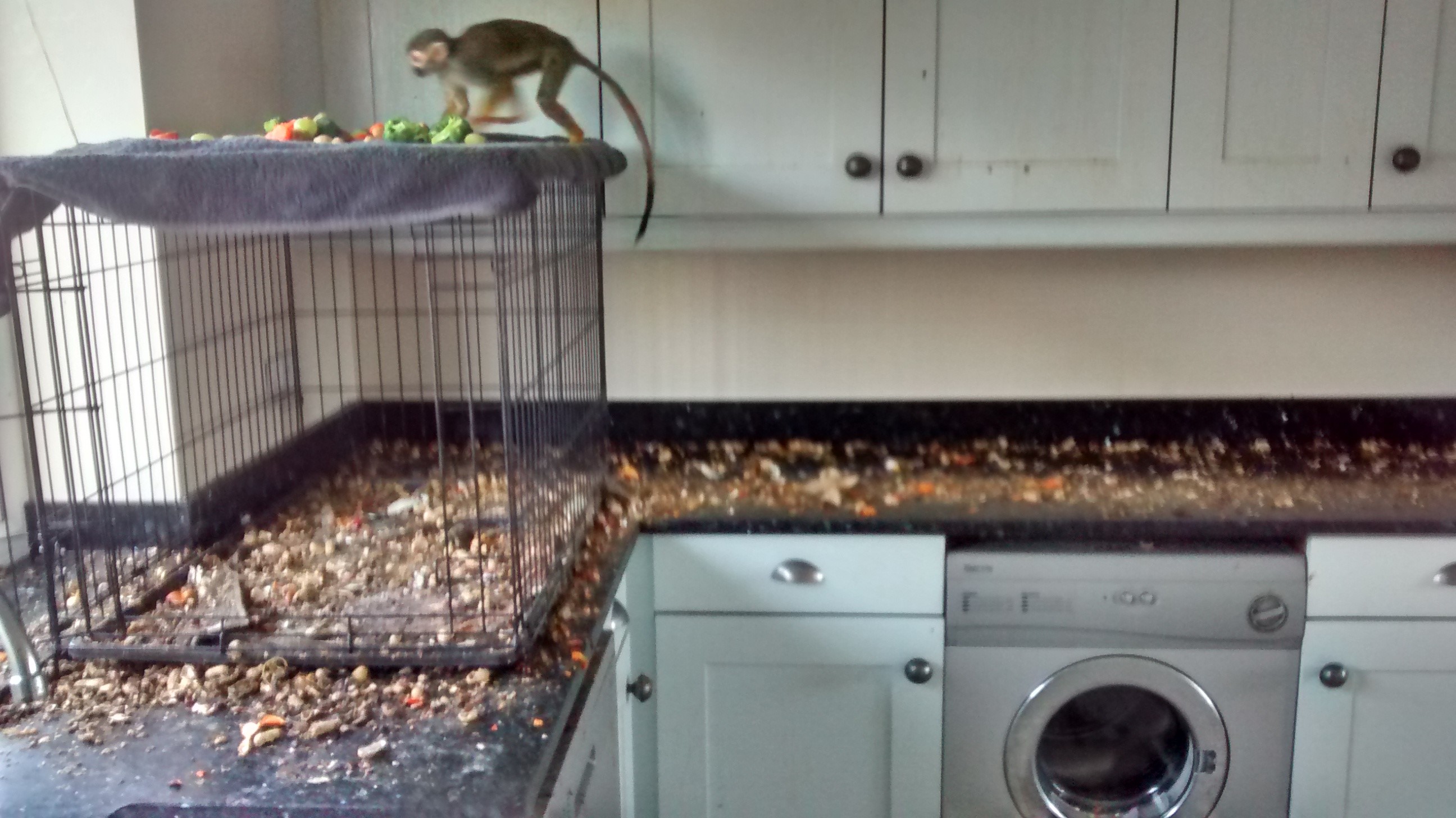 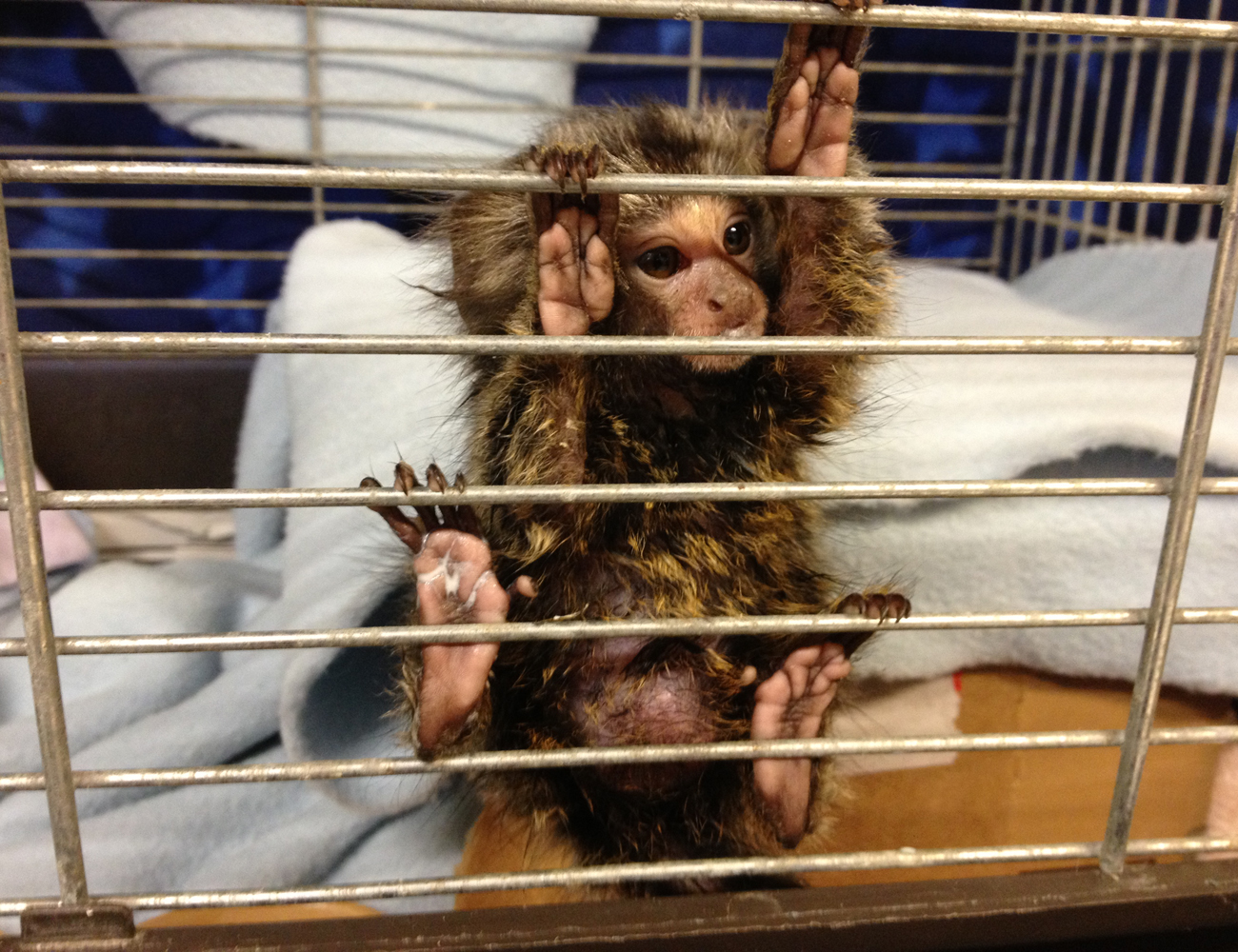 Baby Leo was far too young to be separated from his mum and was kept in a tiny cageCredit: Monkey World

Babies ripped from mums a year too early

When Charlie and Clydie were confiscated from their owner’s Liverpool home by the police, and brought to Monkey World in Dorset, they were extremely underweight and malnourished, with broken teeth and signs of organ failure.

Tragically, Charlie couldn’t be saved. Clydie, who had been almost constantly pregnant and was expecting another litter, was close to collapse and, due to lack of sunlight, suffered from low bone density.

Her babies, which marmosets carry on their backs, had been cruelly taken from her before they were weaned.

In the wild, a marmoset would not leave its mother until it was between a year and 18-months old, yet British breeders are selling baby monkeys as young as two months openly online - often claiming they were rejected by their mothers.

A quick search online throws up hundreds of adverts offering monkeys for sale, from as little as £300 to £2,000.

One is topped with the notice: “No licence required to own marmosets in the UK”.

Another read: "Pygmy marmoset and Capuchin,squirrel and spider monkeys available, vaccinated and well socialized. Their ages range from 10 weeks to 15 weeks." 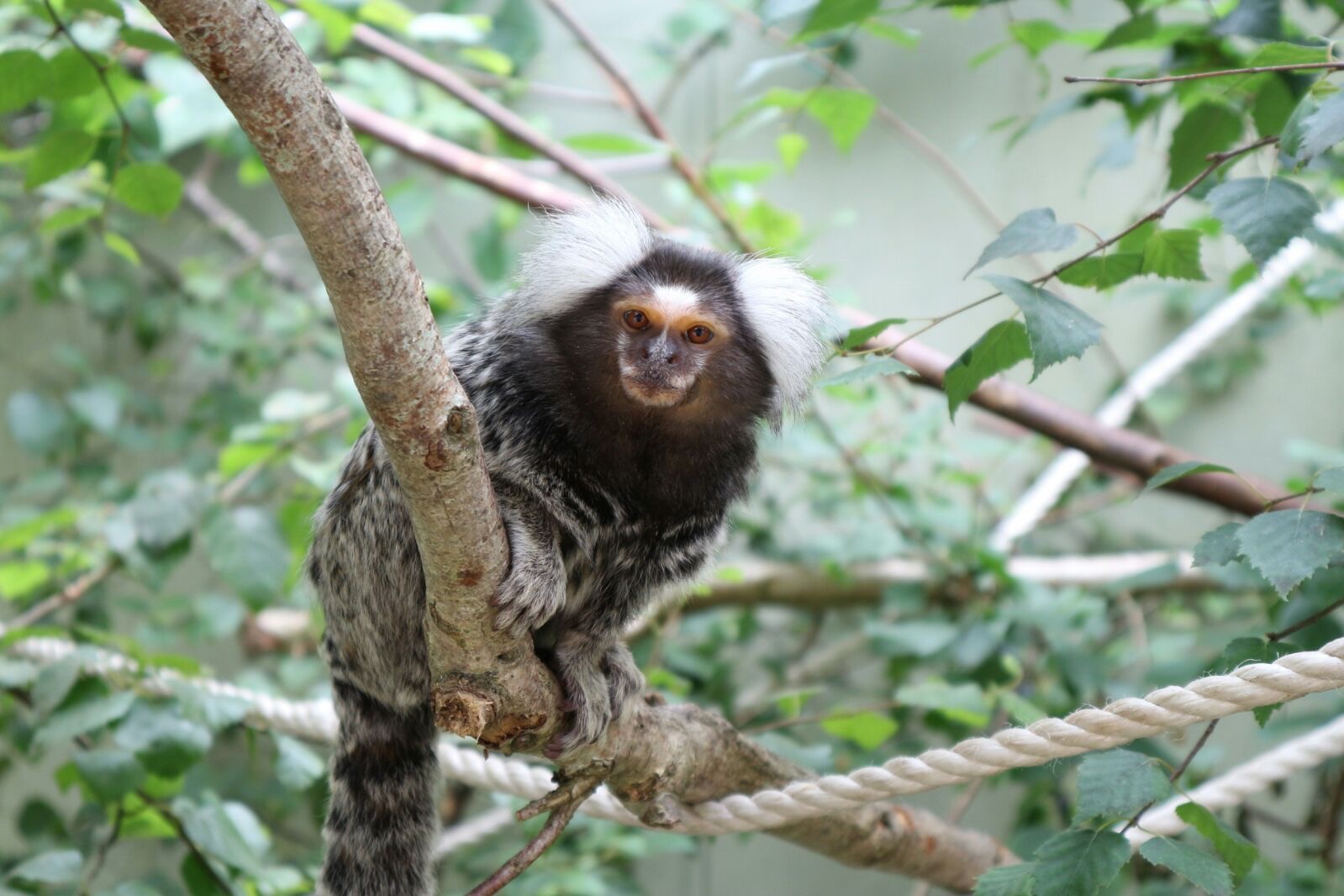 Clydie was rescued by Monkey World and is now living in the Dorset sanctuaryCredit: Monkey World 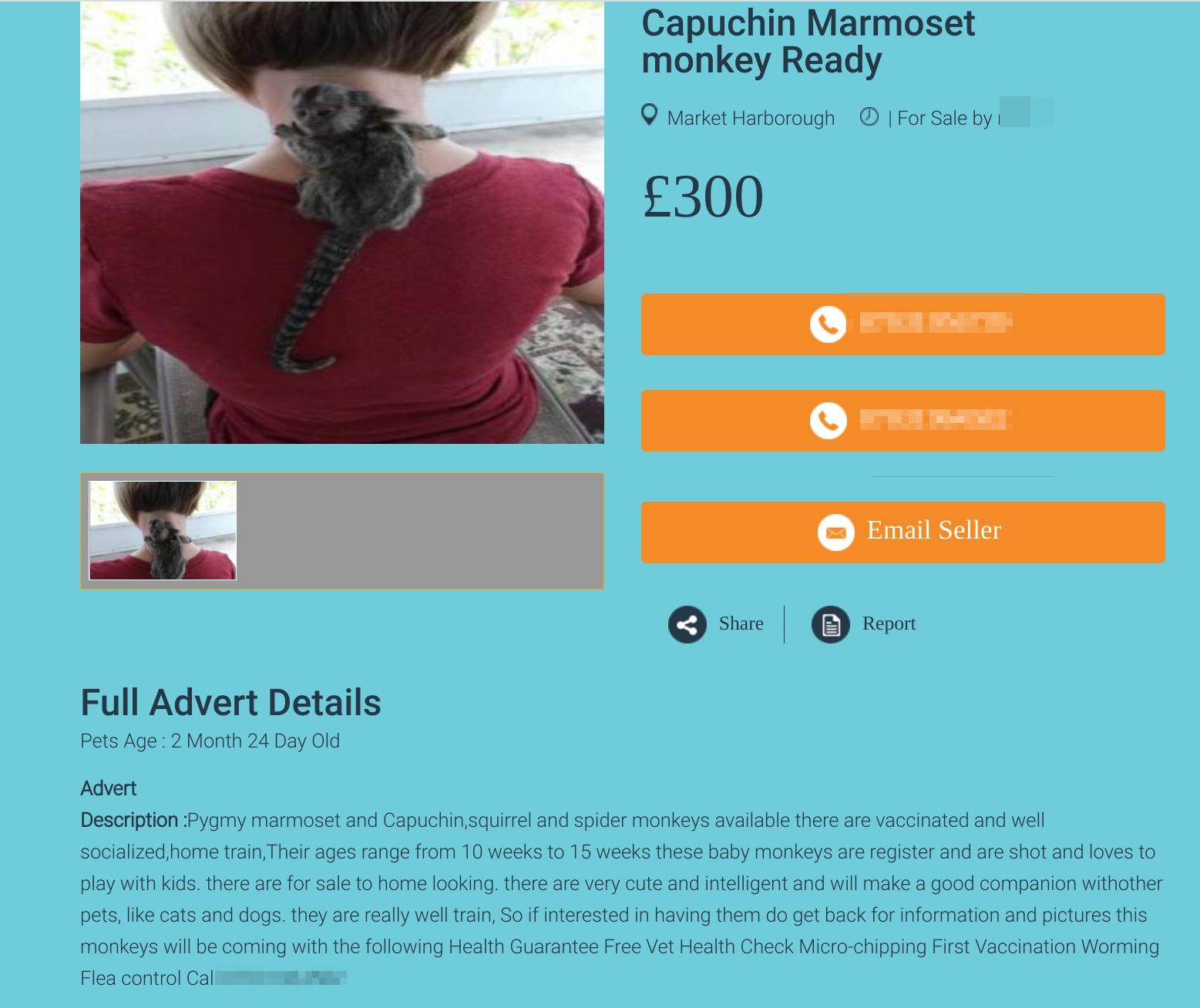 Crippled by rickets and malnourished at two months

Leo, a baby marmoset, was just two months old when he was rescued from a Camden flat, where he lived alone in a tiny cage.

His fur was matted, he was malnourished and already suffered from rickets due to a poor diet. He could barely move, dragging his back legs behind his body as he trembled with pain and any small fall or strain from climbing could have been fatal.

Luckily, after care from the Monkey World team, baby Leo was strong enough to be introduced to a new family, and was adopted by female Sammy, who carried him on his back as he grew brave enough to explore the enclosure.

Although a common marmoset, the owner had been told he was a much smaller pygmy marmoset, in order to justify the high price tag of £1,700.

As well as being separated from his mother too young Leo, like most monkeys kept as pets, suffered because of lack of sunlight, veterinary care and social interaction with their own kind. 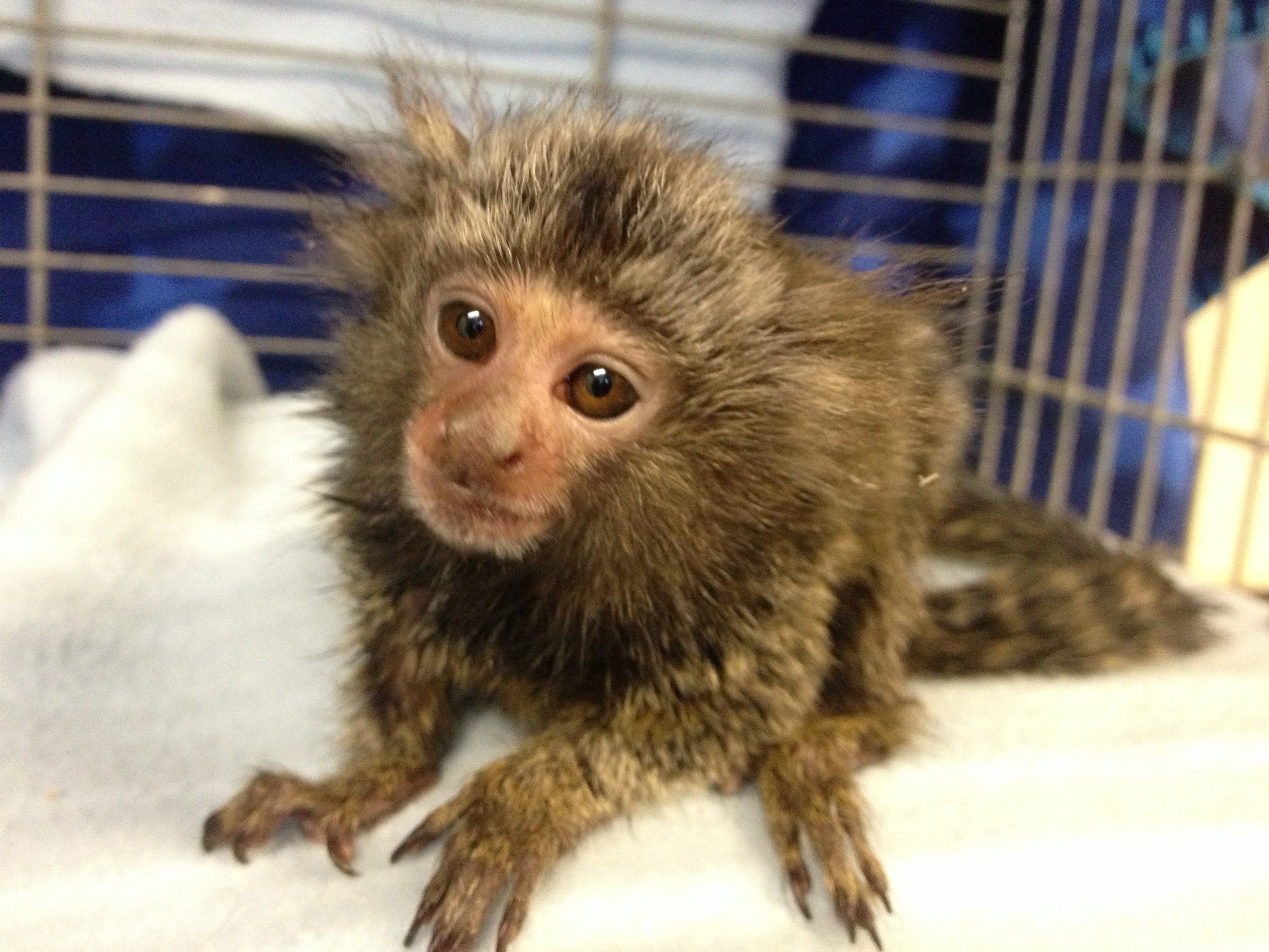 Little Leo was just two months old when he was found in a Camden flatCredit: Monkey World 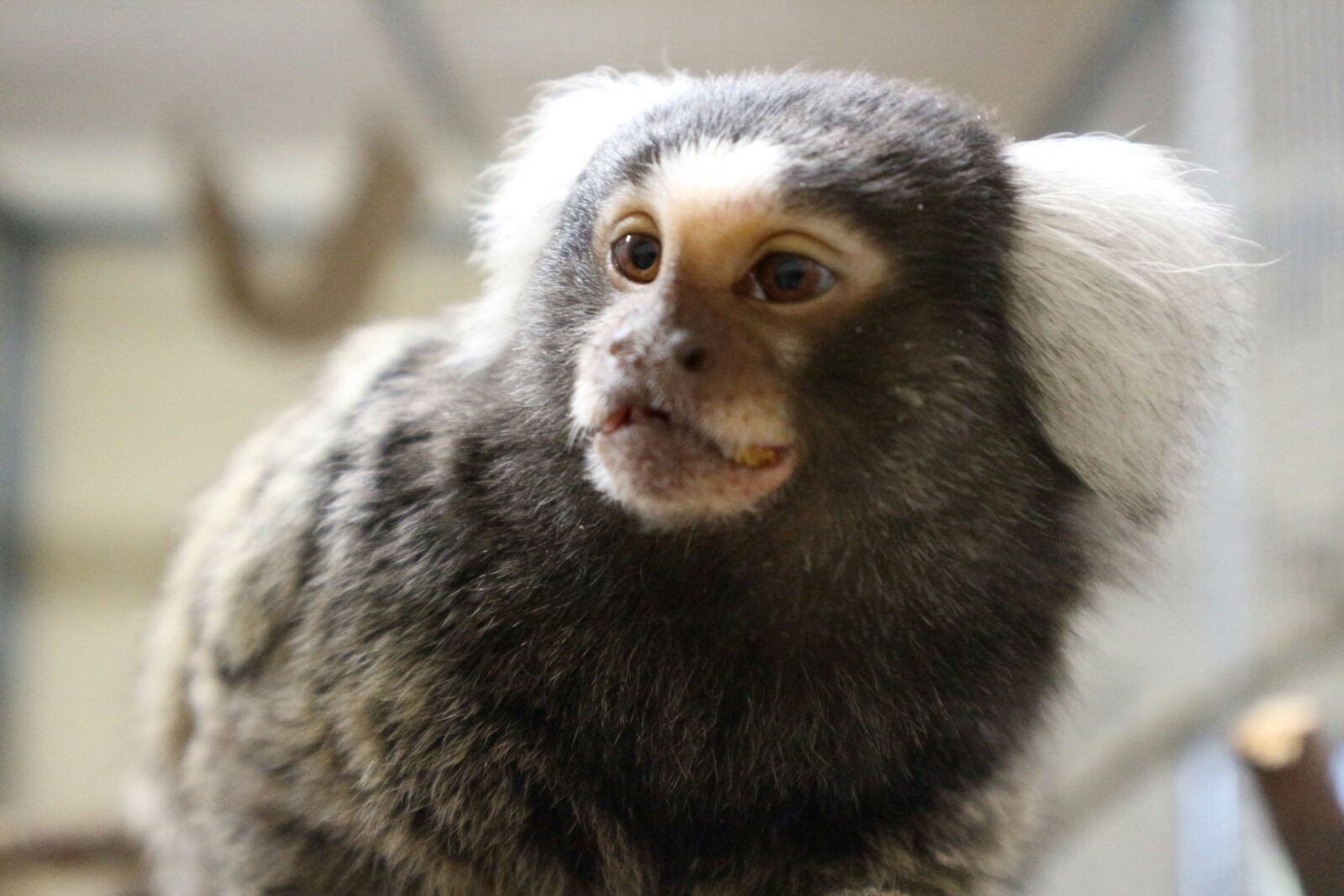 Leo is now fully rehabilitated and has been adopted by a new familyCredit: Monkey World

Despite numerous forums on social media, the owners of monkeys like to keep their cards close to their chest.

Most Facebook pages devoted to pets are closed and when we reached out to an open forum, which has 7,000 members, we were told none would speak to us.

The secretive nature of private ownership means that the true number of monkeys - and the condition they might be living in - remains hidden.

“It's kept behind closed doors and that makes it difficult to know where they are,” says Dr Clubb.

“We typically get calls from people who either know someone who's got a monkey, have seen one in the window or seen a cage in the back garden, and are worried.”

With no regulation, breeders often give false information to buyers and the many forums found online are a hotbed of bad advice.

One user on a Facebook forum, asked why their marmoset was making high pitched keening sound, was told that monkeys “make all kinds of noises” - when in fact it could have been “contact call”, used by a lonely primate in a desperate attempt to reach members of his own tribe.

Many owners say they treat their monkeys with marshmallows - which actually cause dental problems and increase the risk of diabetes.

“Because it's legal, it's easy for unscrupulous breeders and dealers to sell animals to people at an extraordinary price,” says Dr Alison Cronin, CEO of Monkey World.

“They tell buyers they make ideal family pets and that they're good with children and or other animals, and that you can feed them food from your own plate.

“We rescued several animals from an area in Northern England recently, who we suspect come from the same breeder, and the buyers were told they could be fed on little pieces of pizza and chips which is absolutely wrong.” 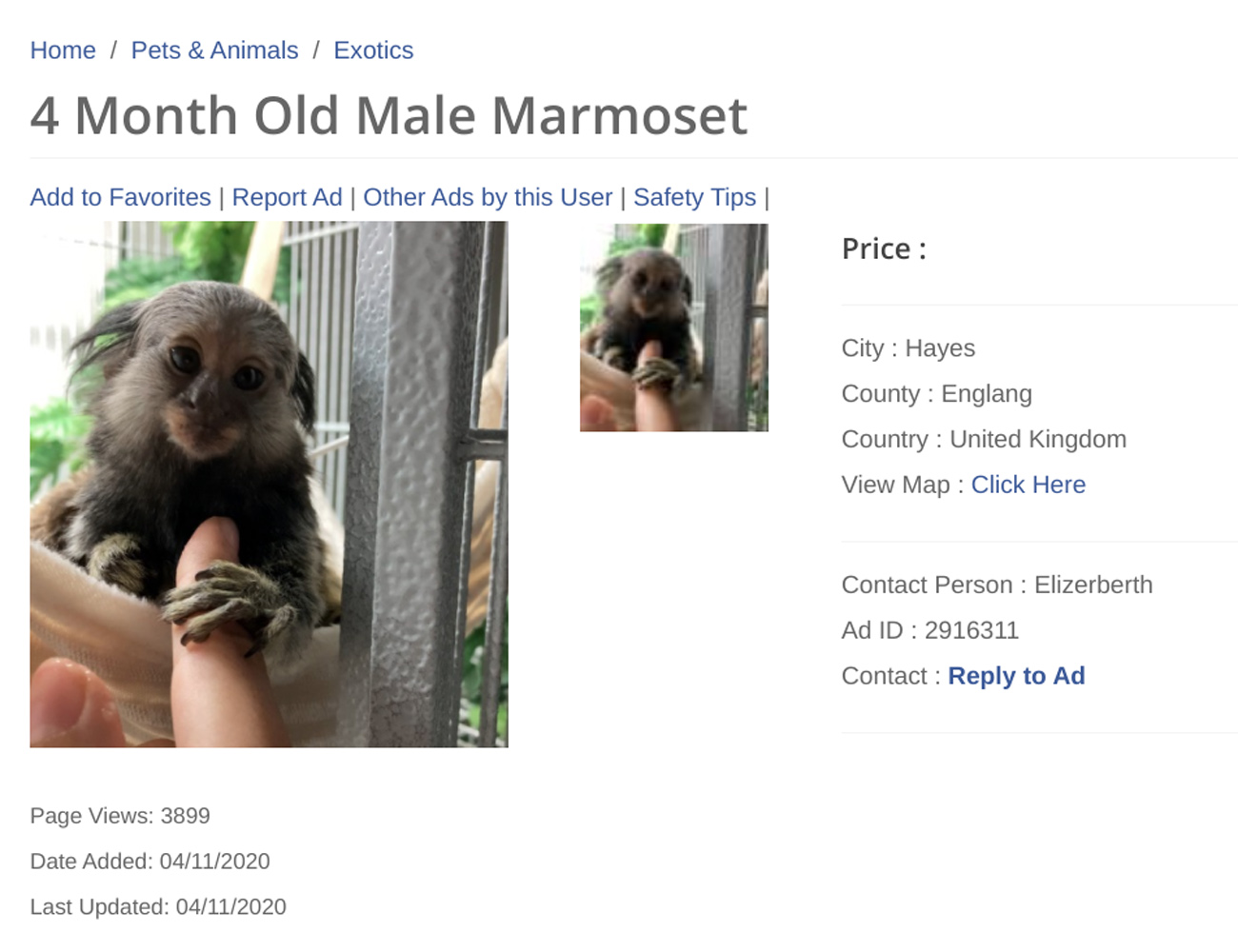 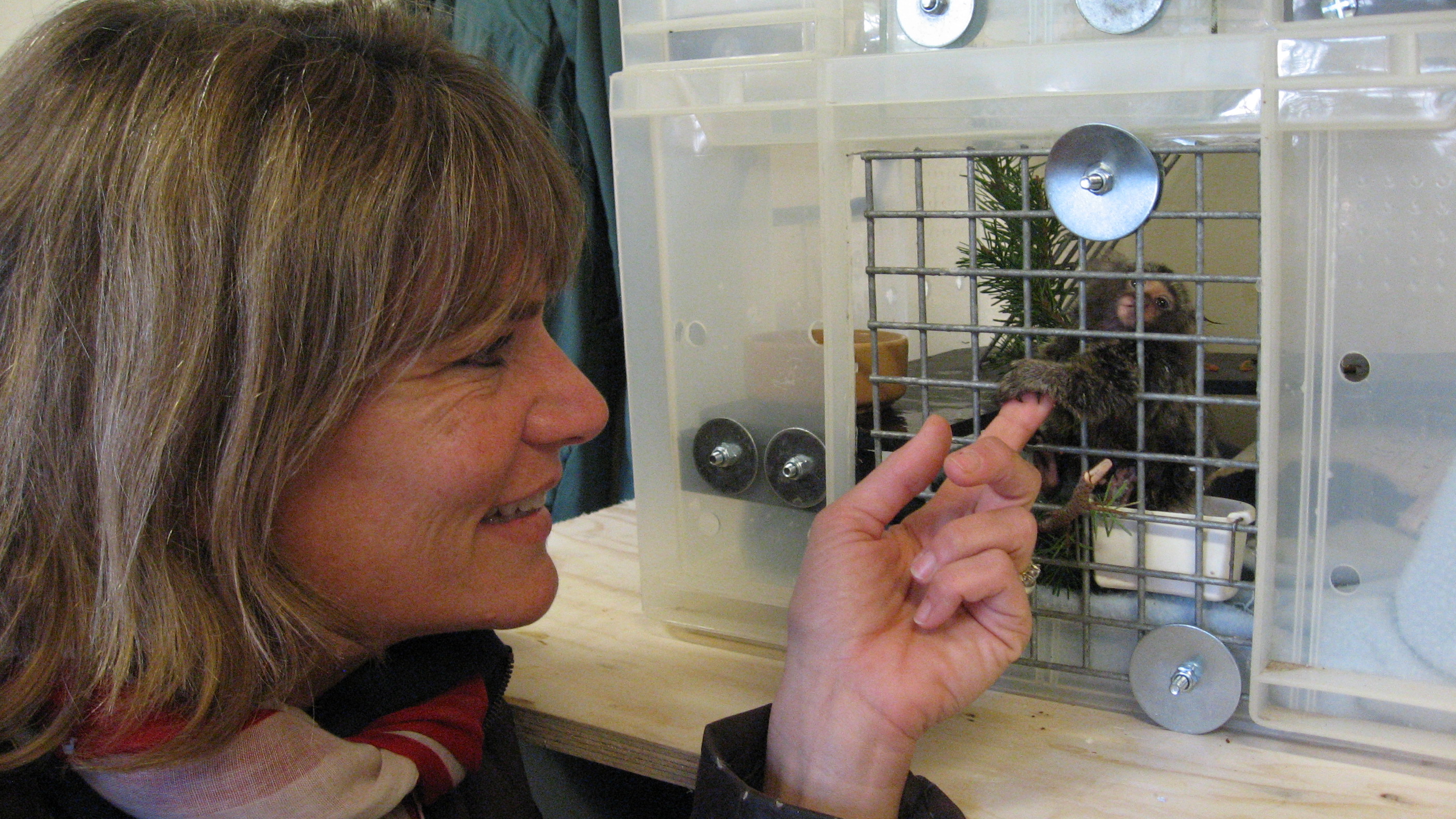 Dr Alison Cronin with a baby marmoset rescued by the sanctuaryCredit: Monkey World

Deprived of sunlight and company they crave

The vast majority of rescued monkeys are found living inside, without the sunlight they need, and alone - the total opposite of how they live in the wild.

Monkeys are social animals and live in big family groups, interacting with each other, grooming, foraging and sleeping close together at night and, Dr Cronin insists, the environment cannot be recreated in a British home.

“Even the most well-meaning person is no substitute for the companionship of another marmoset,” she says.

“It’s cruel and it is no different to suggesting you could take a human child and dump it in the forest to live with chimpanzees.”

“It’s cruel and it is no different to suggesting you could take a human child and dump it in the forest to live with chimpanzees.

With specialist vets few and far between, it’s difficult to get treatment if they do become sick and, in many cases, the animals can become dangerous as they hit maturity.

“We've had cases where people have been attacked and you don’t want to be on the wrong side of a capuchin or a lemur, which have really sharp canines,” says Dr Clubb.

“But even a marmoset, which is about the size of a squirrel, can become aggressive once they reach sexual maturity, at about 12 to 18 months old and that can cause problems, especially in a family.” 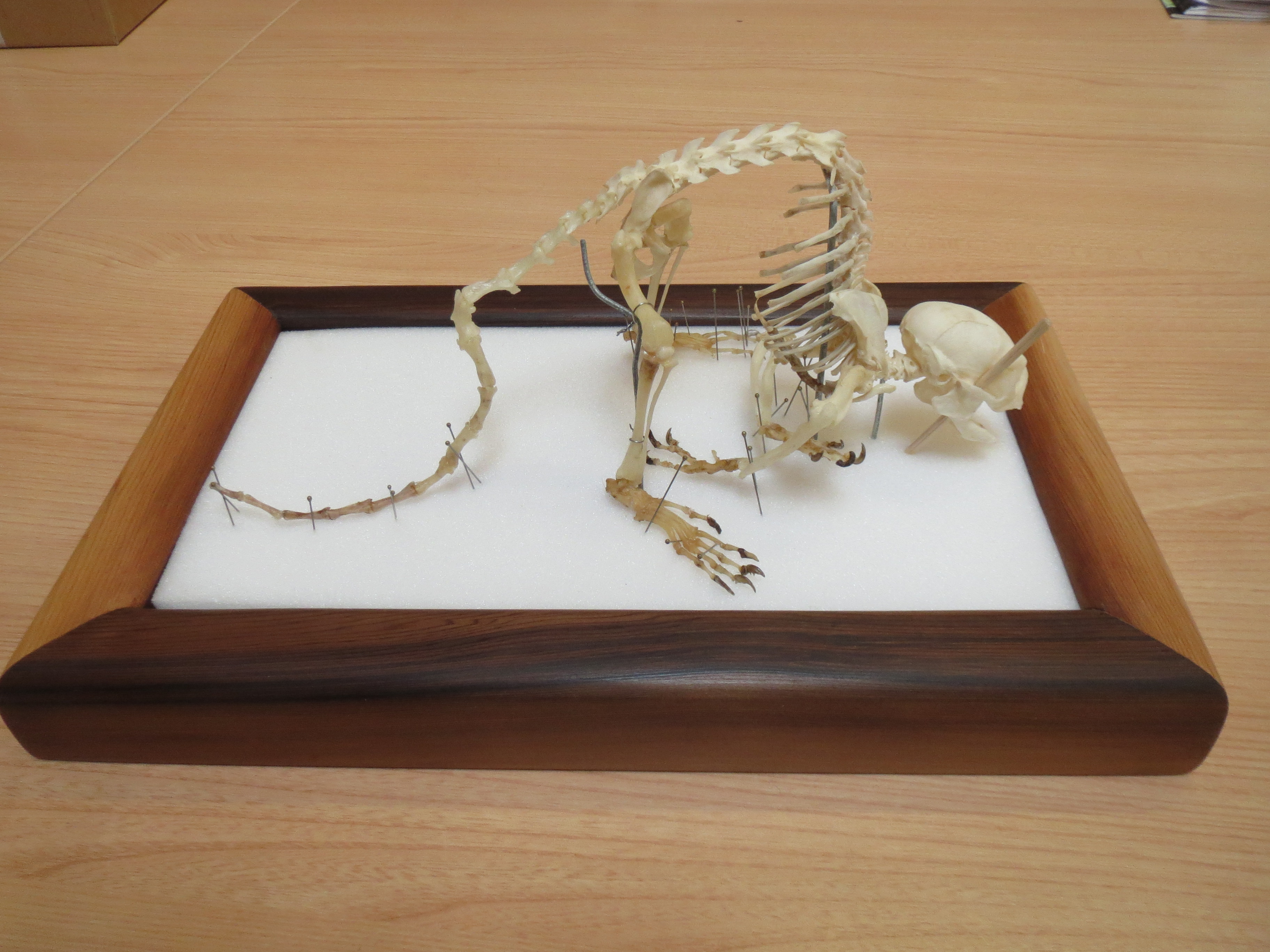 The skeleton of marmoset Betty Boo, rescued from a Southampton home in 2003, shows the extent of damage caused Credit: Supplied 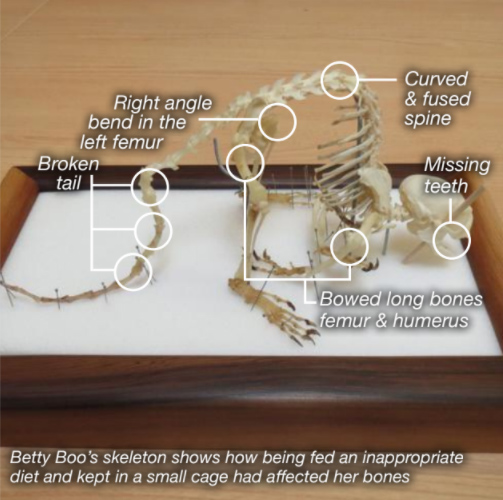 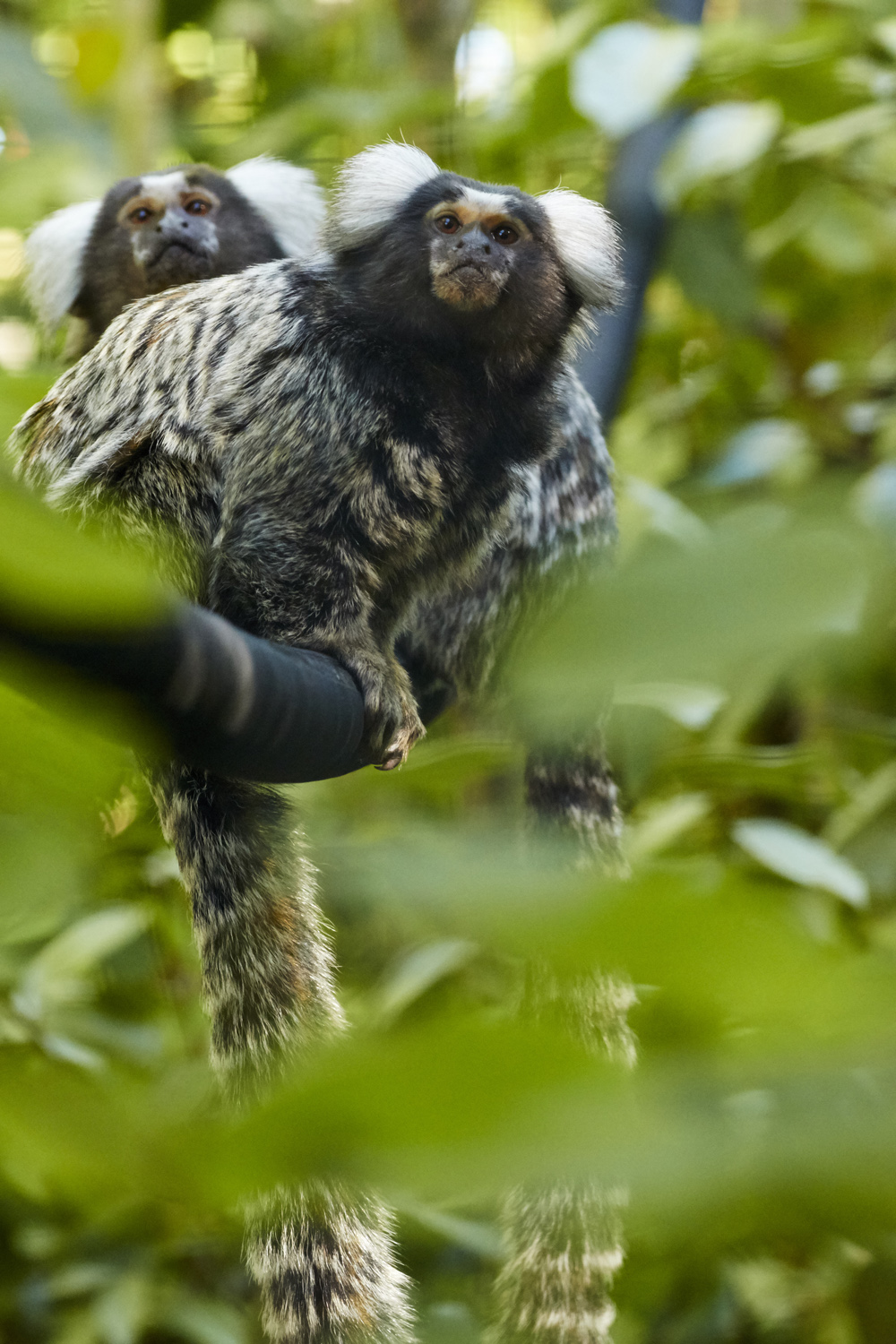 Rescued from crack dens full of smoked and needles

Dr Cronin - who stars in TV’s Monkey Business - has been rescuing monkeys from owners and breeders since marrying Monkey World founder Jim Cronin in 1996.

On one occasion, she was called in for a police raid on a crack den in the New Forest.

“I went with seven police officers in flak jackets, into an unsecured room covered with needles to try and catch a marmoset, so it was dangerous” she says.

“It was a tiny marmoset and had been stuck in a room filled with smoke. Police collected huge bags of burnt spoons.

“In another police raid, in North London, the gang squad was after a mobile phone thief and they were told he had just purchased a monkey.

“I told the officers ‘If it’s a marmoset you’ll know by the smell as soon as you enter the flat’ because they leave urine to label their territory and it’s a very strong smell.

“What I hadn't bargained for was that the owner smoked a lot of strong marijuana, and that’s what he used the flat for, so that was all we could smell.

“This poor creature was sitting in a tiny cage in a freezing flat with no heat and no electricity, waiting in the dark for this guy to come over every day.” 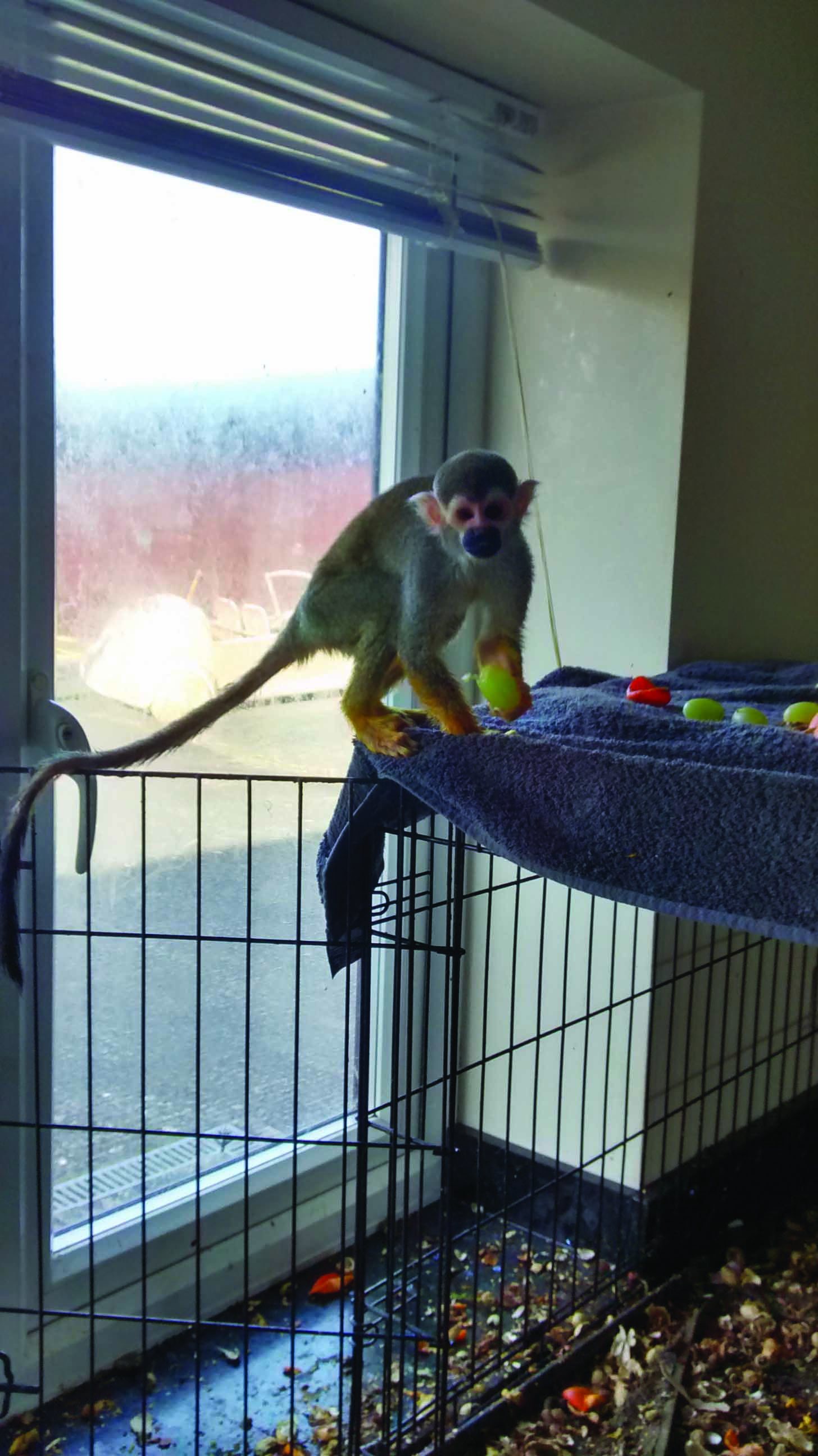 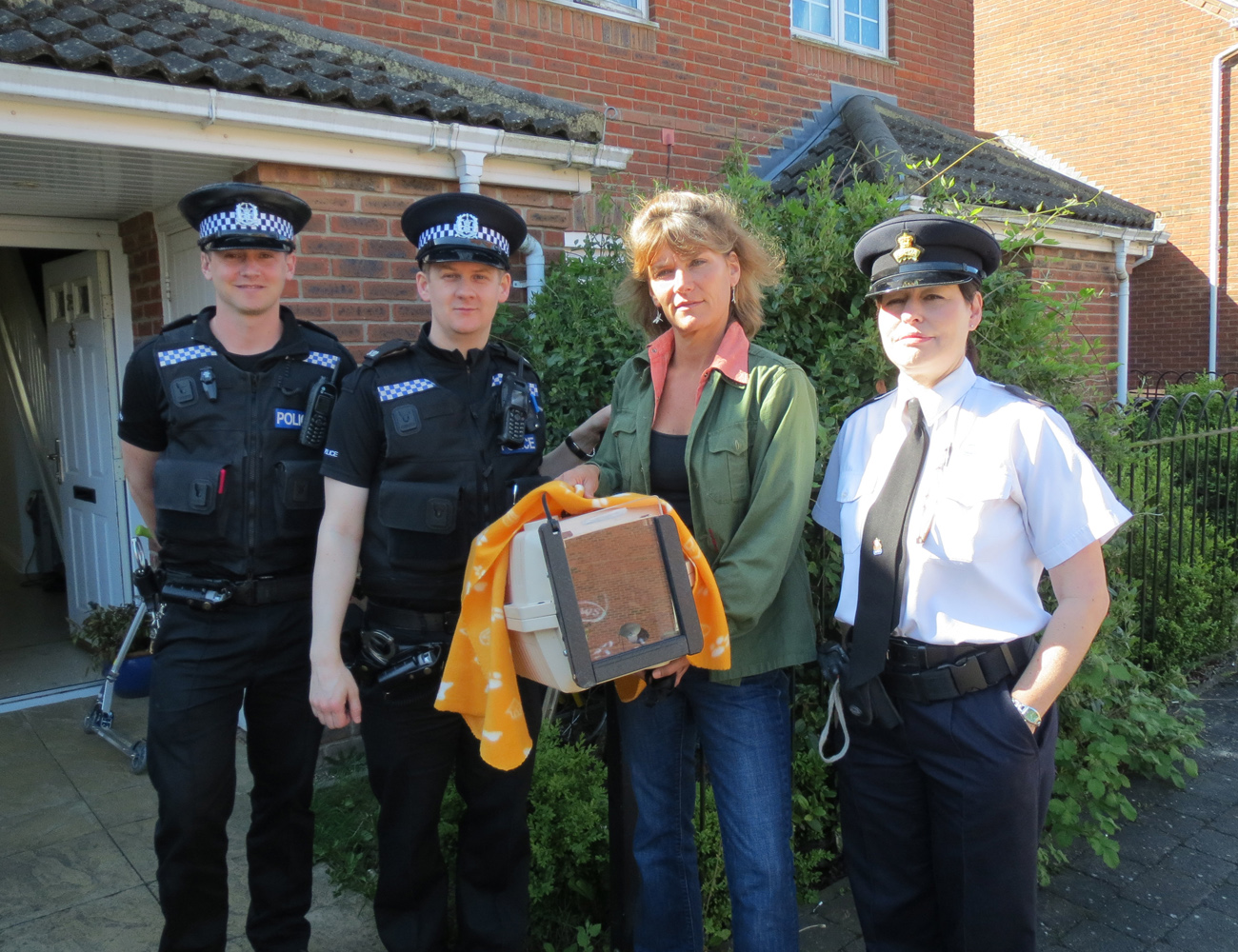 Dr Cronin is often called in to assist by police who find monkeys Credit: Supplied

While Dr Cronin has seen a huge amount of abuse and neglect, she is keen to point out that owners are often victims too.

“The unscrupulous breeders and dealers are also taking advantage of the public who pay a lot of money,” she says.

“There’s human suffering too because well meaning people who are ignorant to the specialist needs of primates are sold these animals and get attached to them. They quickly realise the marmosets, Tamarins and squirrel monkeys are unhappy, they develop medical issues and become hyper aggressive.

“One couple were sold a marmoset for £1,700 and he would sit on top of the curtain rail making contact calls - which they called crying - hoping that he would hear a response from his own kind.

“It doesn't take long for observant, intelligent people to realise that's wrong and that’s when we get the call.

“We currently have a waiting list of 126 monkeys that need to be housed.”

Dr Cronin and the RSPCA have welcomed the government intervention after Lord Goldsmith vowed to "take action to prevent the suffering caused to [monkeys] when they are kept as pets” and take “a big step closer towards banning the practice." 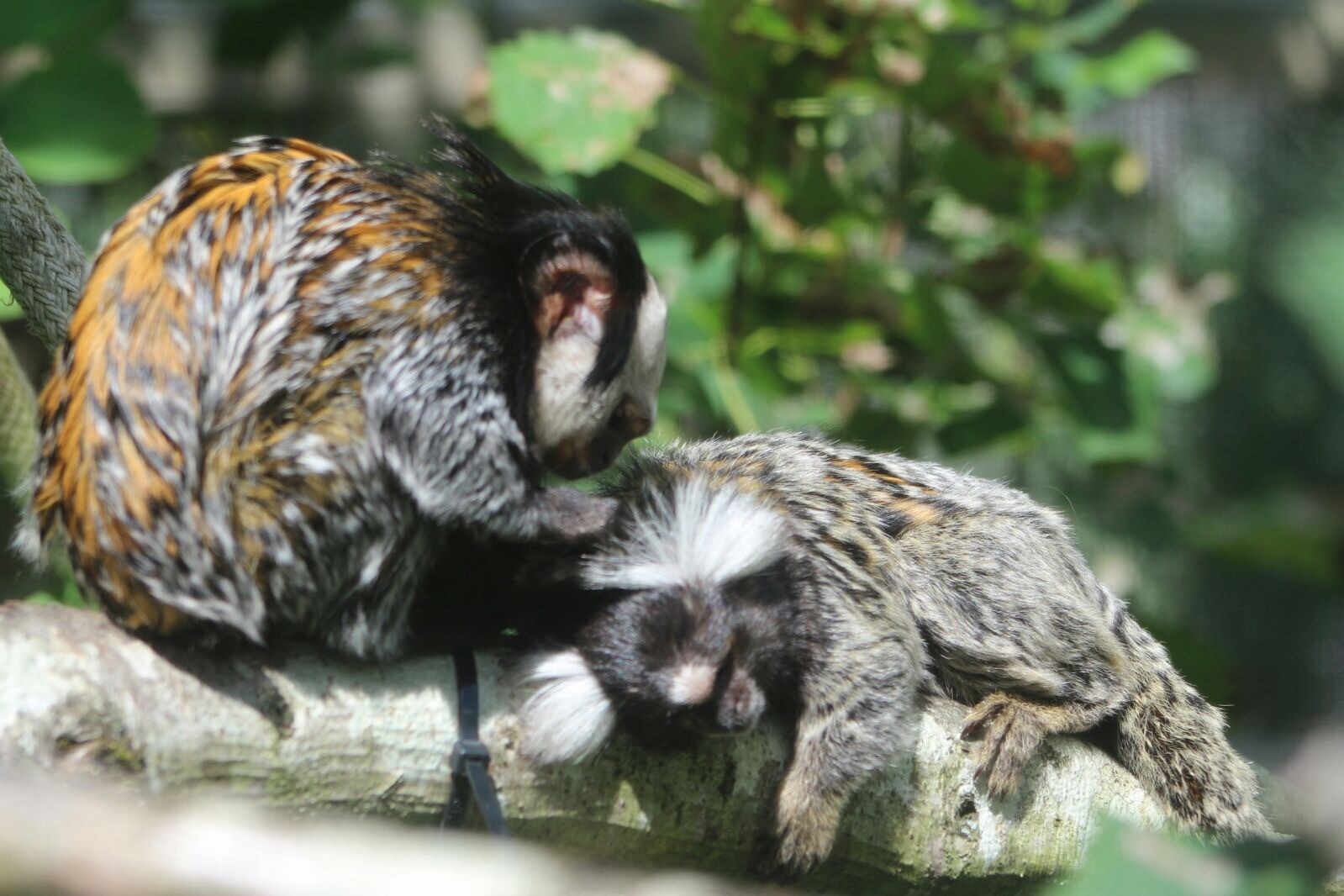 The eight week consultation on proposed changes has now begun.

“Britain is a nation of animal lovers,” says Dr Cronin. “And I don't believe the current situation is what the overwhelming majority of British people want or expect from their animal protection laws.

“It does need to be addressed and I'm so pleased that Minister Goldsmith and his team are taking on this task.”