PROTESTERS ransacked shops and hurled petrol bombs at police in Italy and Spain last night over new restrictions to curb the spread of coronavirus.

Violence erupted in the Italian city of Turin as protesters smashed windows, set off smoke bombs and hurled bottles at cops.

A firefighter walks past a burning bin during protests in BarcelonaCredit: AFP OR LICENSORS 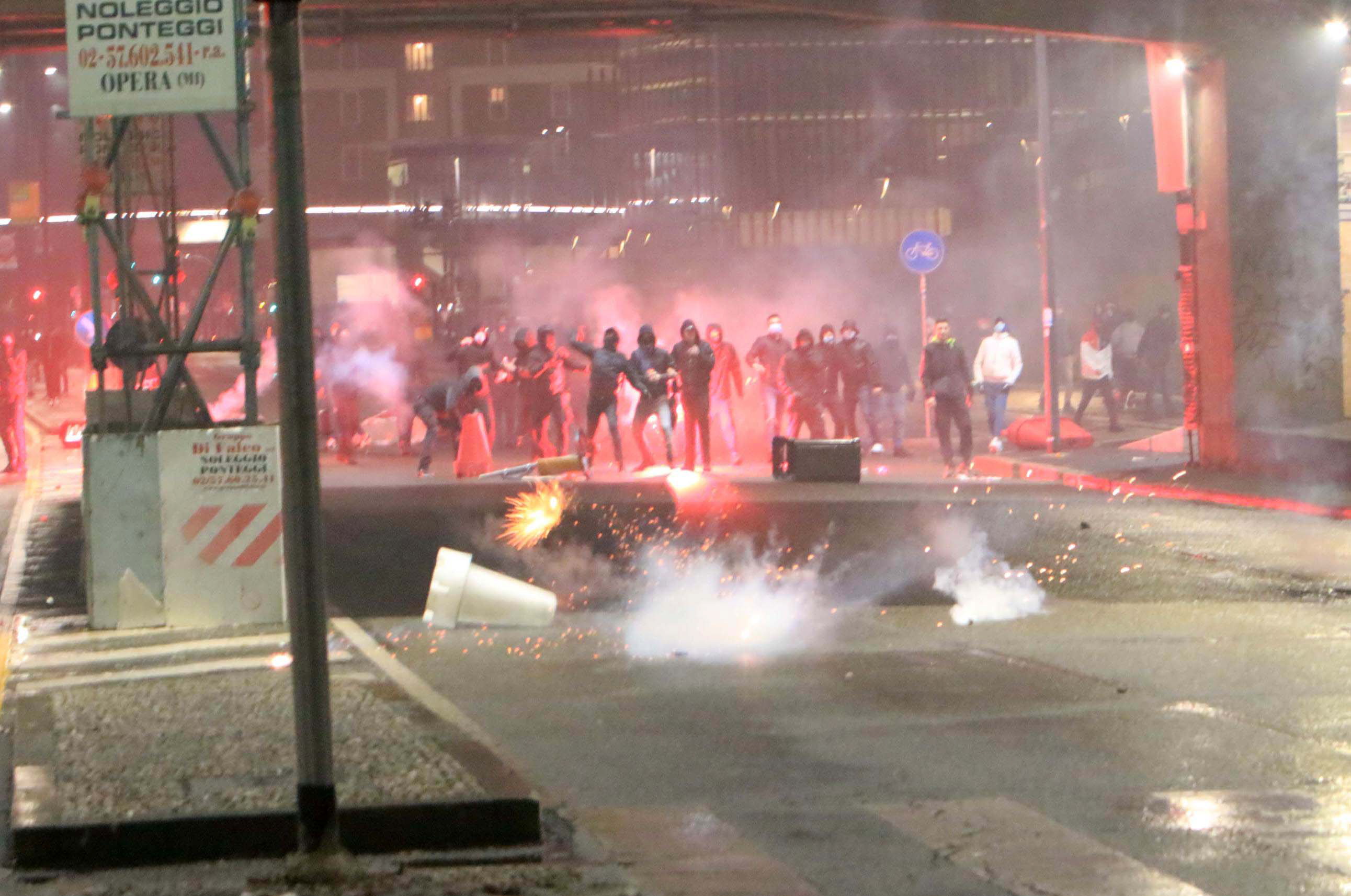 Protesters clash with police in Milan during violent protestsCredit: EPA

Cops stand guard outside a Gucci store in TurinCredit: AFP or licensors

Luxury clothing shops, including a Gucci store, were ransacked in the city centre as crowds of youths took to the streets to set off firecrackers and coloured flares.

Police responded by firing tear gas to disperse the crowds.

Hours earlier, 300 taxis peacefully lined up in neat rows in the same area to draw attention to the financial losses from the pandemic.

Officers stand guard as protesters take to the streets in BarcelonaCredit: EPA

A bin burns during protests in BarcelonaCredit: EPA

Protesters in Milan lit coloured flares in the streetsCredit: BackGrid

Protesters take to the streets in MilanCredit: Rex Features 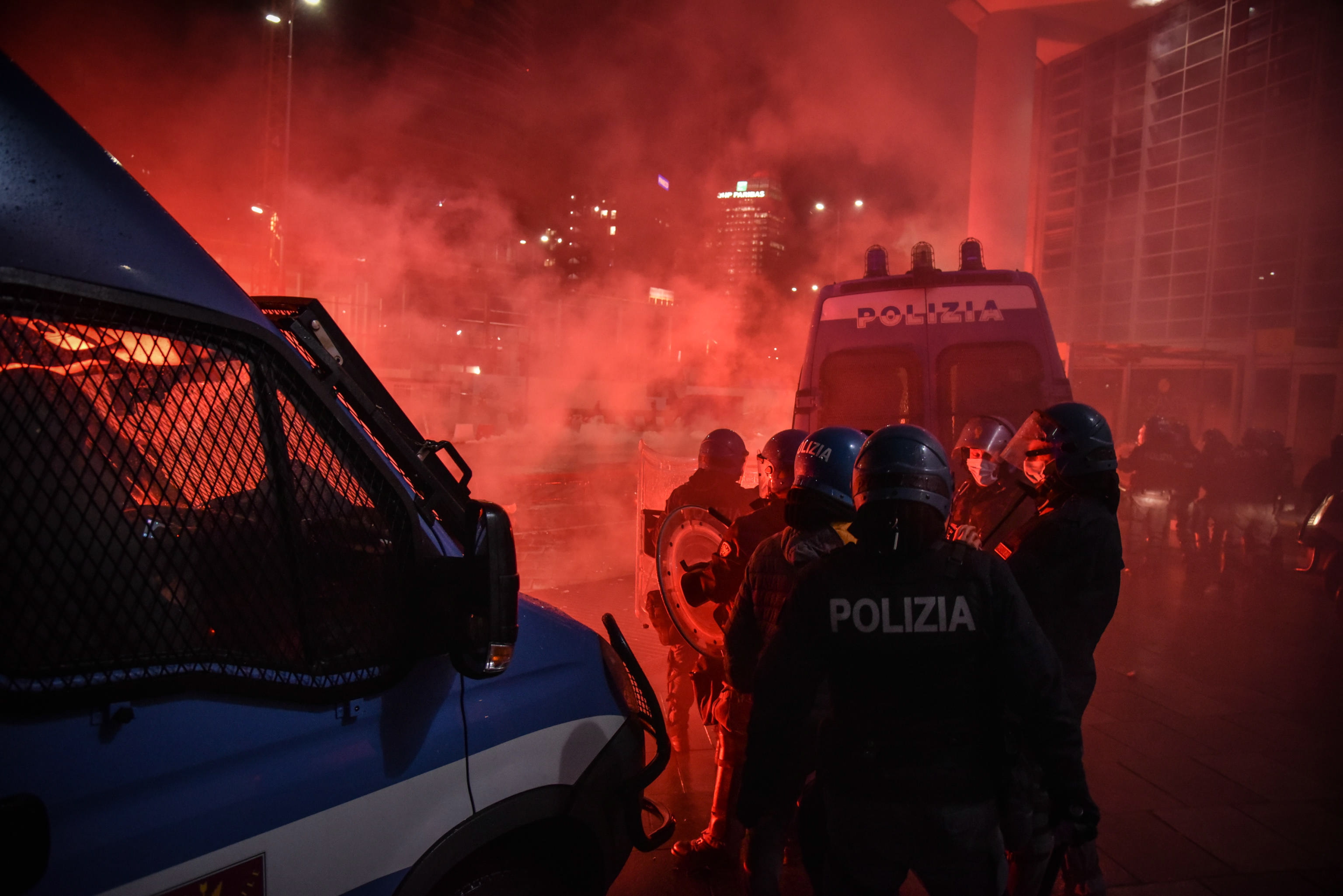 The unrest was blamed on extremist agitators and police said 28 people had been arrested in the capital.

There were also clashes in Spain last night as hundreds gathered in Barcelona to protest the Spanish and Catalan governments’ latest coronavirus restrictions.

Protesters set fire to bins and lit flares in the street to demonstrate against curfews.

Protests in Italy have been prompted by a government order to close bars, cafes and restaurants at 6pm, which lasts until November 24, also took place in Rome, Genoa, Palermo and Trieste.

A fire burns as police and protesters clash in TurinCredit: Getty Images - Getty

Firefighters put out a fire during demonstrations in TurinCredit: Getty Images - Getty

Last week, a peaceful march by shopkeepers in Naples over a regional 11pm curfew turned violent near the Campania region’s headquarters.

Police officers were injured, according to Italian media, during the violence led by Camorra, the local organised crime group.

The crackdown was announced on Sunday, a day after Italy registered more than a half a million confirmed coronavirus cases since the outbreak began. 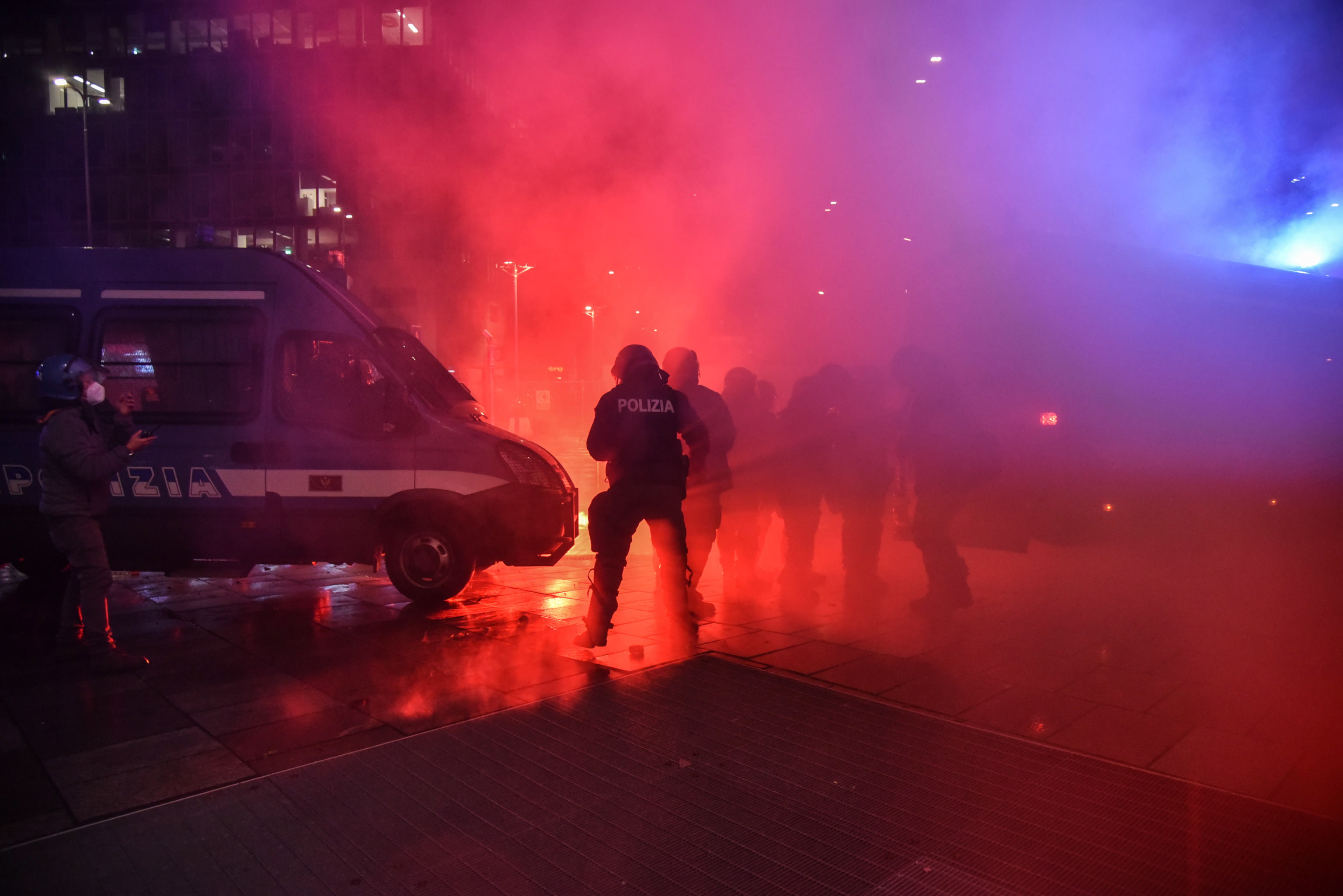 A taxi driver takes part in a protest in BarcelonaCredit: EPA 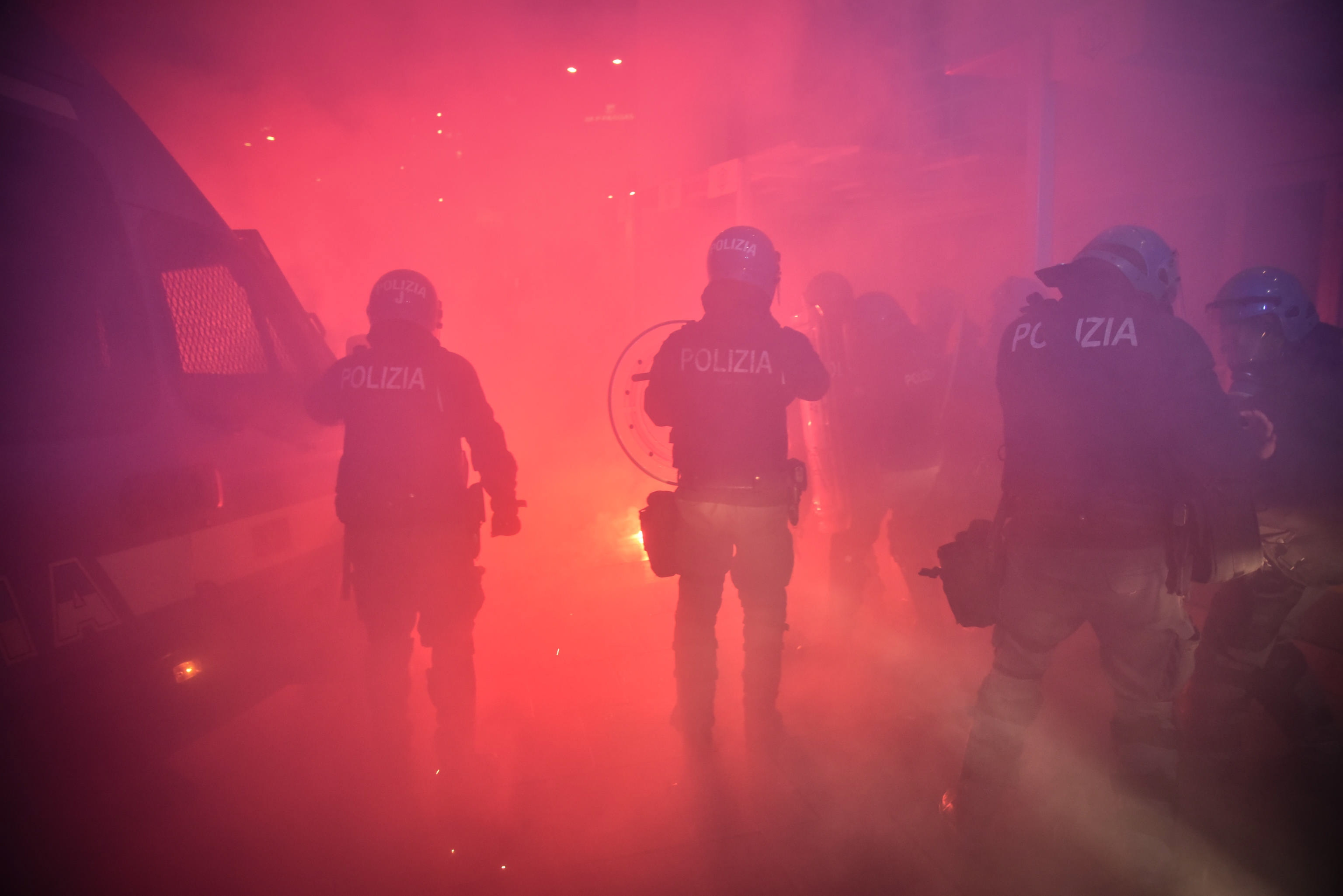 Protests erupted after Italy's bars and restaurants were ordered to stop serving at 6pmCredit: EPA 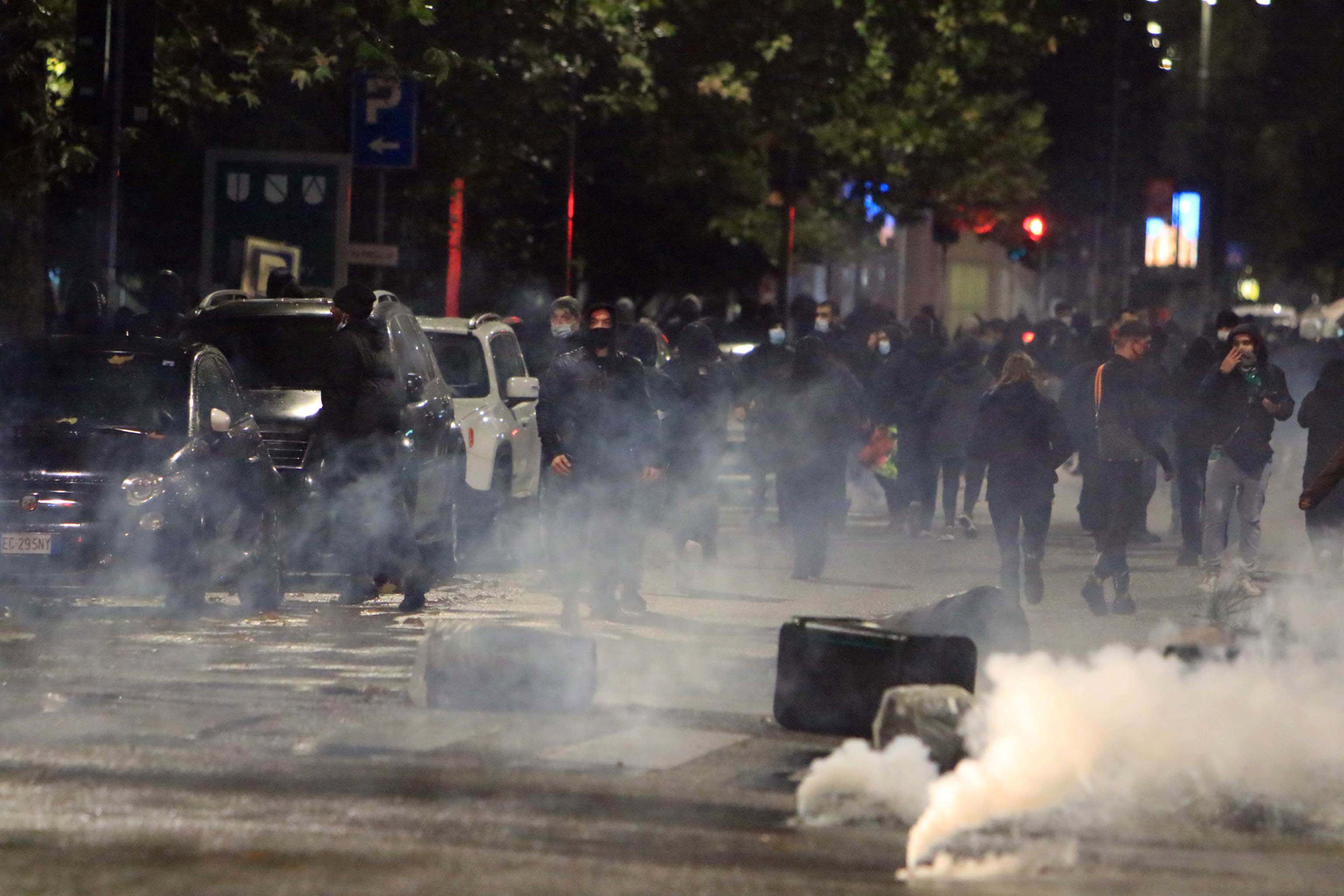