JOE Biden appeared to confuse Donald Trump with George W. Bush as his wife Jill had to correct him in his latest campaign gaffe.

The 77-year-old was speaking to supporters at a virtual concert as he continues to shun large rallies over coronavirus fears. 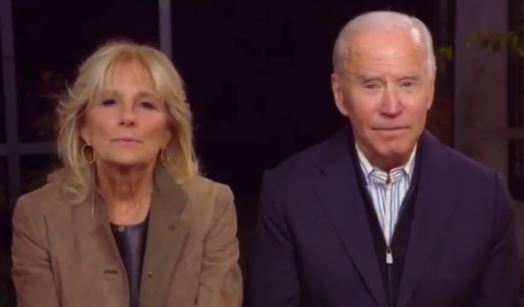 Biden appeared to stumble over his words as he said the Democrat campaign was fighting against "four more years of George".

His wife Jill then appears to quietly correct him under her breath, and Biden went back to saying "Trump".

The Vice President's gaffes and stumbles are often seized upon by his Republican rival as signs that he is not fit to govern - branding him "Sleepy Joe".

Biden said: "Four more years of George - we're going to find ourselves in a position where, if Trump gets elected, we're going to be in a different world,"

Biden has been open about suffering a lifelong stutter, and often trips over his words - but Trump campaigners have suggested his gaffes are signs he is going senile.

His latest stumble was picked up by Trump War Room, a Trump campaign Twitter account regularly re-tweeted by the President.

It shared the clip with its almost one million followers, and it was retweeted nearly 10,000 times and liked more than 21,000 times.

Trump supporter and former Republican congresswoman Dr Nan Hayworth, who previously compared voting for Biden as voting for the Third Reich, claimed the clip showed the Democrat had "clear signs of dementia". 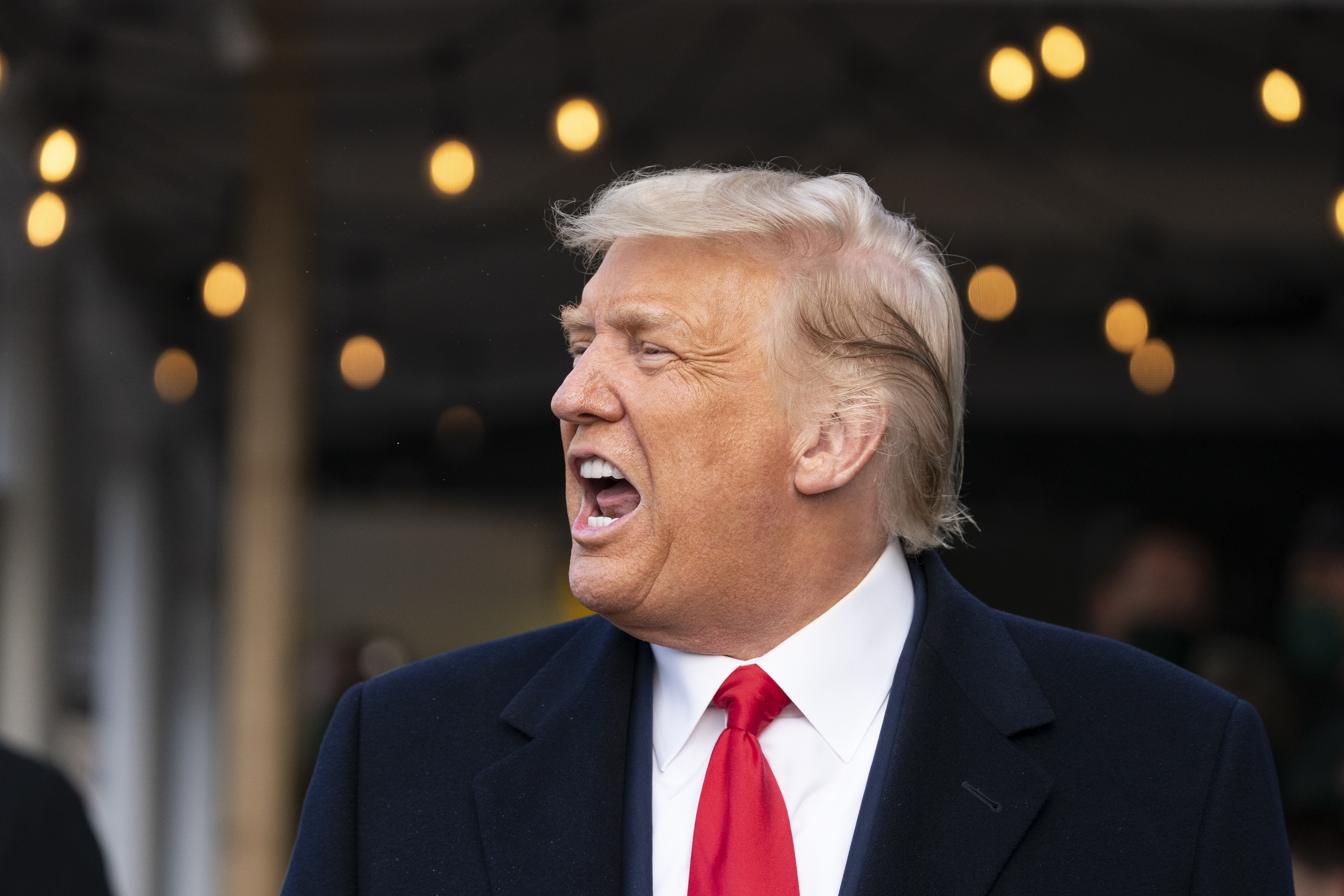 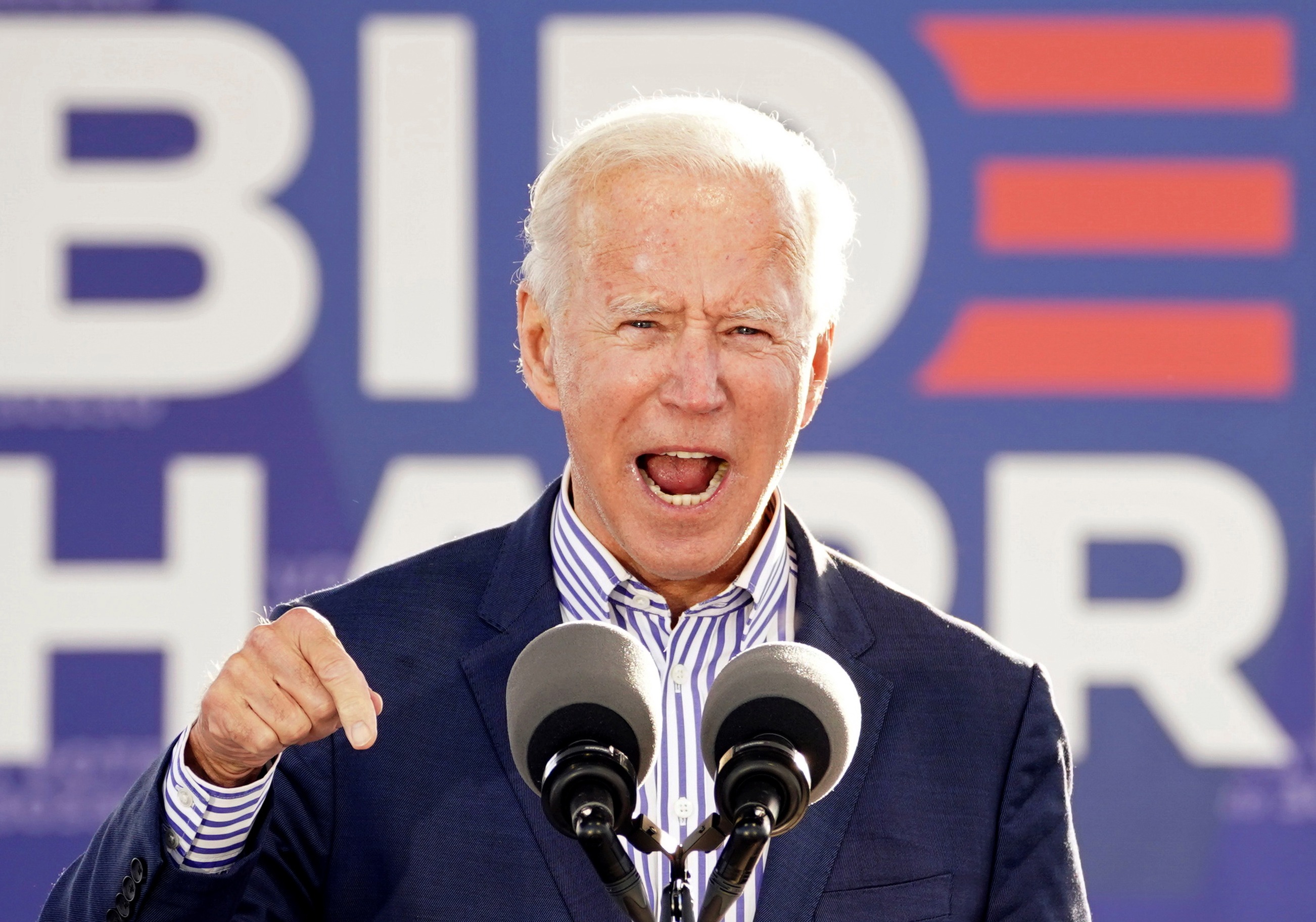 Joe Biden currently enjoys an up to ten point lead in the national pollsCredit: Reuters

Dr Hayworth said: "That's it. Mr. Biden shows clear signs of dementia. This is tonight. This is why they're keeping him under a lid.

" There's no way Mr. Biden could forget the name of the CURRENT President, the one against whom he is running, unless he lacked full cognitive function.

Trump mocked Biden with a campaign poster showing the Democrat in a care home two weeks ago.

He shared the photoshopped image of Biden surrounded by elderly people in wheelchairs to Twitter .

The photo was accompanied by the words "Biden for President" with the "P" crossed out - meaning it read "Biden for Resident".

Trump lashed out after Biden misspoke on the campaign trail, forgetting Romney's name and mistakenly saying he was running for the Senate in what the President called a "bad day" for his rival. 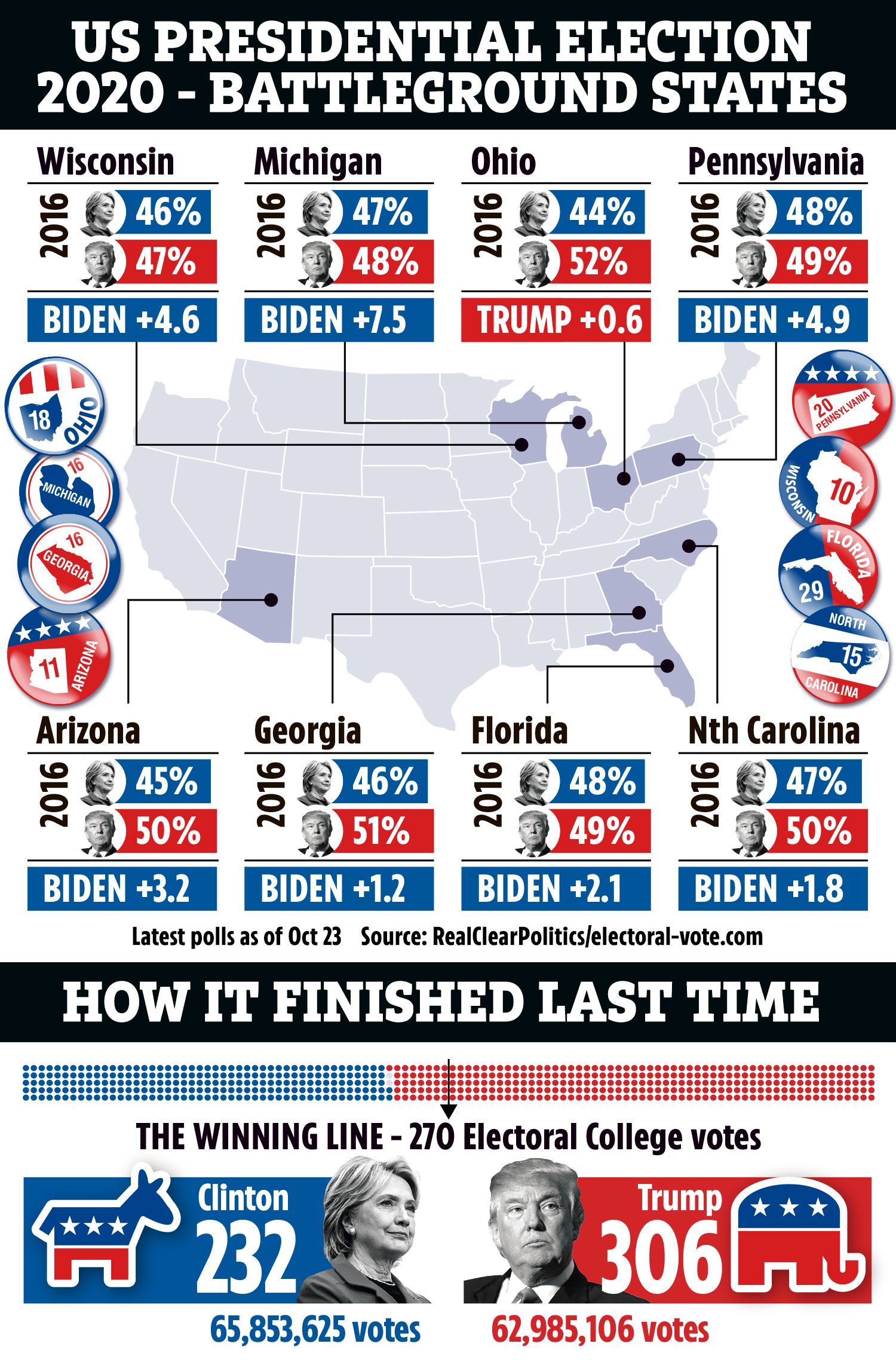 Biden - if elected - would be the oldest president ever to serve in the White House.

But the same is true of if Trump is re-elected aged 74.

The Democrat has previously laughed off concerns over his mental capacity but acknowledged its a "legitimate" concern.

Speaking on World News Tonight on ABC in August, Biden said: "I think it's a legitimate question to ask anybody over 70 years old whether or not they're fit and whether they're ready.

"But I just, only thing I can say to the American people, it's a legitimate question to ask anybody. Watch me."

Trump outright claimed Biden had dementia earlier this month, saying it was "obvious and rapidly getting worse".

He added: "If I did any of this, it would be disqualifying. With him, he’s just Sleepy Joe!" 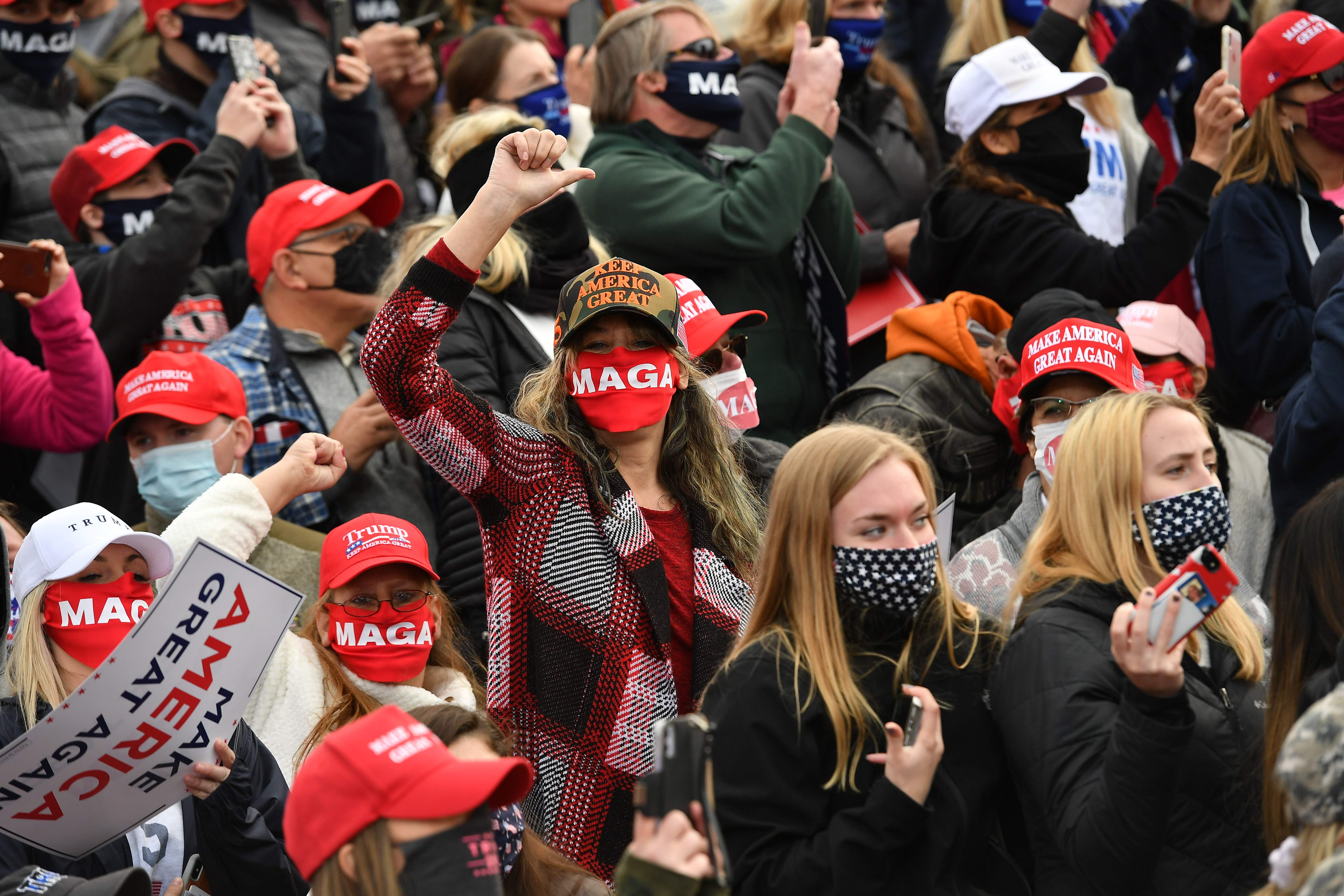 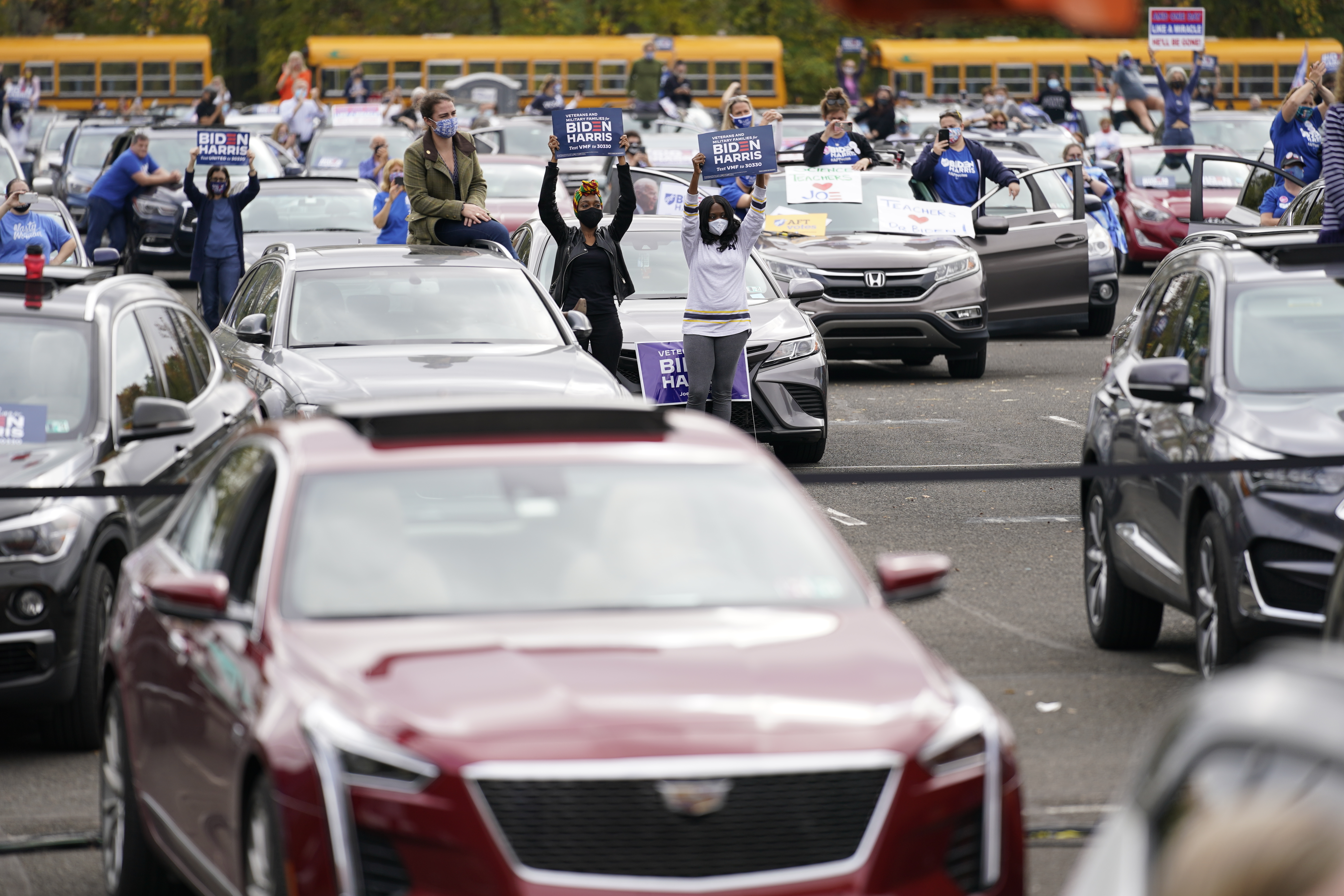 Biden is currently ahead in the national polls by up to ten points going into November 3, but Trump secured an upset win coming from behind when he beat Hillary Clinton in 2016.

Trump has been on the attack with election just over a week away, railing against his predecessor Barack Obama after he stepped up to campaign for Biden.

The President said: "They had 42 people! He drew flies, did you ever hear the expression? Obama drew flies.

"Barack Hussein Obama arrived to help Sleepy Joe because Sleepy Joe is only capable of doing one of these every three or four days."

Trump's attacks on Saturday night came after Obama trolled him for “low ratings” as he ripped into his successor in a fiery speech in support of Biden.

Obama also roasted Trump for his handling of the coronavirus pandemic, claiming the president “doesn’t have a plan" as US cases hit a new high of 81,417 on Friday.