GAFFE-machine Joe Biden has struck again - confusing the Philadelphia Eagles logo for a Delaware college emblem on his OWN jacket.

His blunders keep flying as he publicly mistook his Delaware Blue Hens alma mater emblem for the football club's eagle. 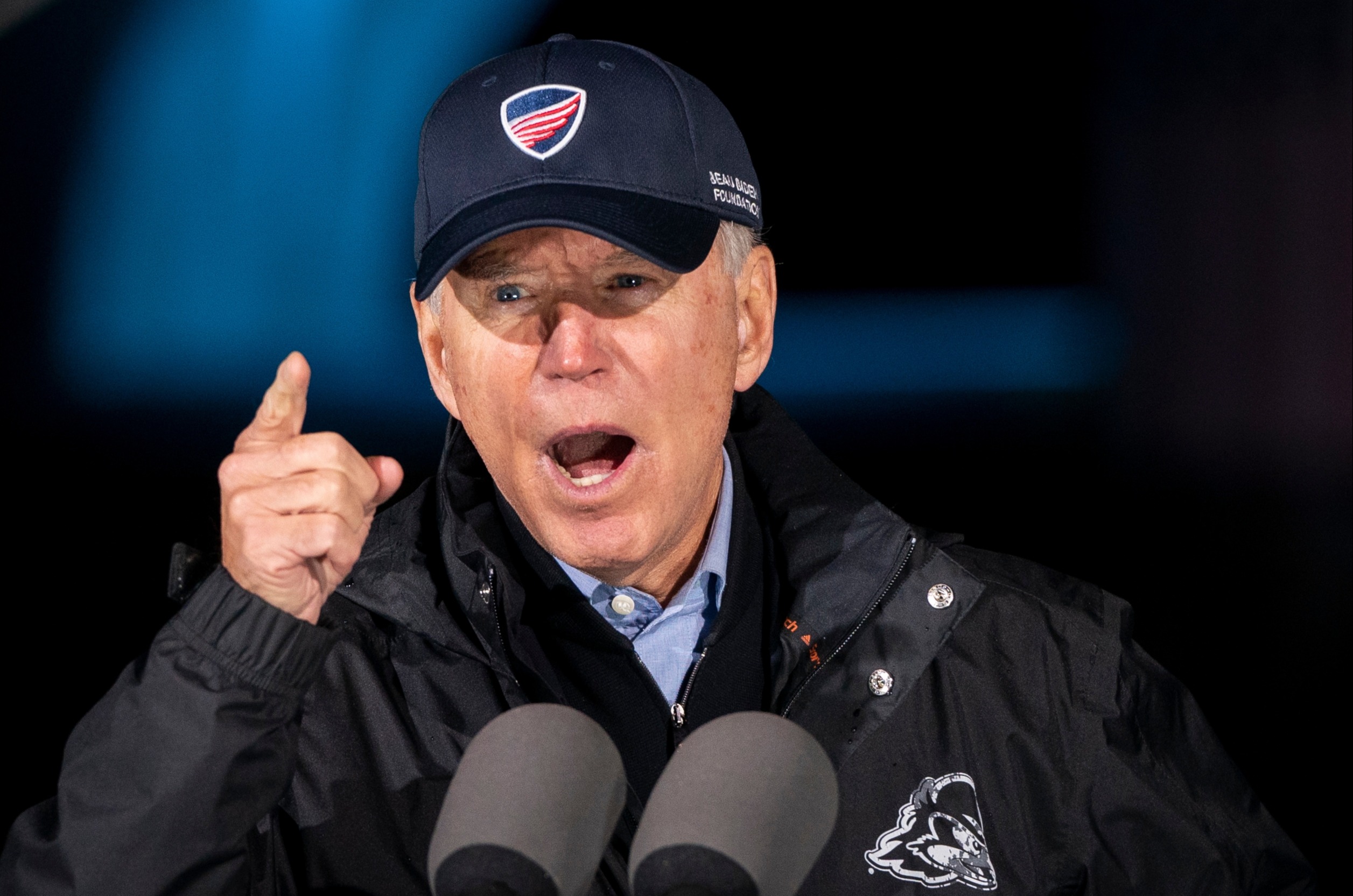 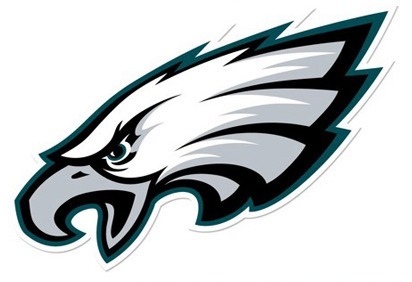 The Philadelphia Eagles logo Joe Biden thought he was wearing 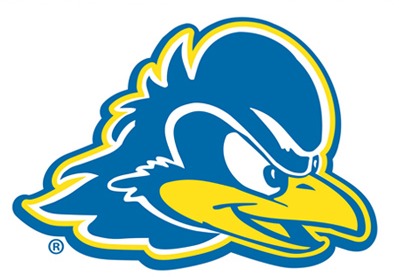 Speaking to a socially distanced crowd in Philadelphia, Biden said: "I was very happy to have the moniker of being known as Pennsylvania's third senator.

"I know Philadelphia well. I married a Philly girl by the way."

Biden's supporters immediately started honking horns in their vehicles to show their approval.

Then, looking down at his jacket, Biden adds, "by the way I got my Eagles jacket on."

This public blunder prompted a swift rebuke on Twitter.

Zach Parkinson, the deputy director of communications for President Donald Trump's campaign, tweeted: "This 'Eagles' jacket Biden claims he's wearing to try and show how much he's in touch with Pennsylvania?

"It's a Delaware Blue Hens jacket."

Biden attended the University of Delaware, graduating from the institution in 1965 with a double major in history and political science.

He wrote about playing in the uni's freshman football team in his memoir Promises to Keep. 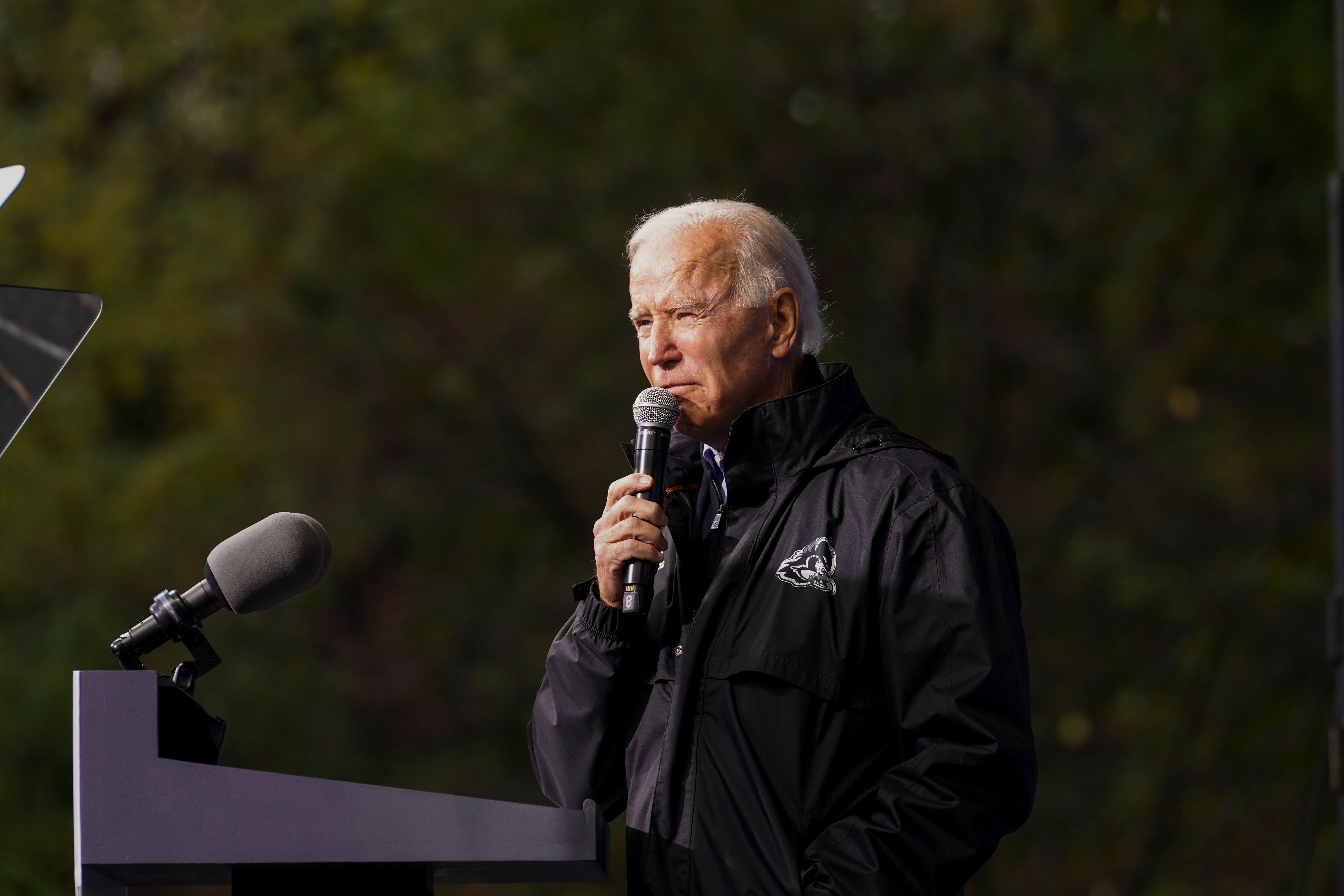 Biden confused the logo on his Delaware Blue Hens jacket for an eagleCredit: Reuters 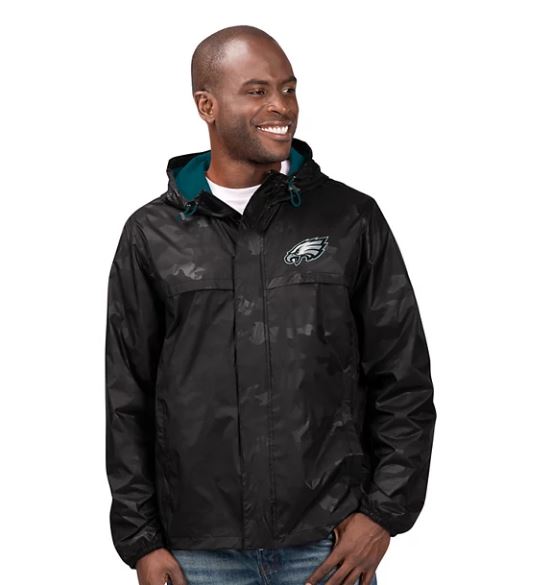 The actual Eagles logo can be seen on this official version 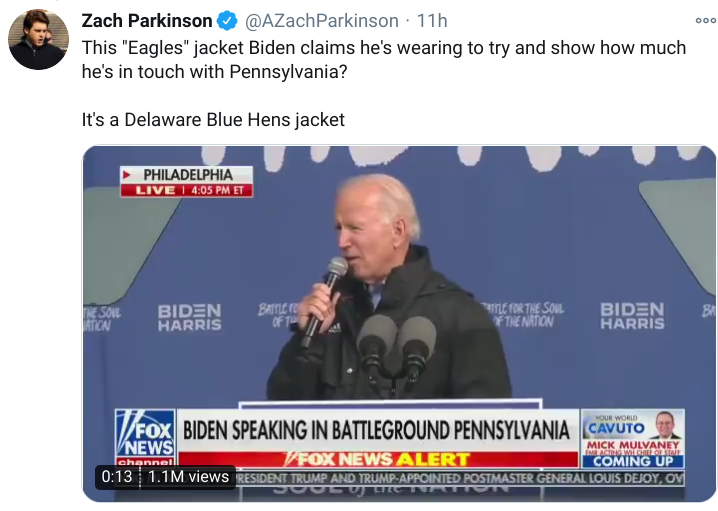 Trump's deputy director of communications points out the mistake

His bungle is the latest of a string of humiliating gaffes.

During an interview with George Lopez, Biden said the Democrats were fighting against “four more years of George”.

He said: "Four more years of George - we're going to find ourselves in a position where, if Trump gets elected, we're going to be in a different world."

He also flubbed the word “healthcare” while attempting to slam the President at a Michigan rally.

During a riff in which Biden vowed to restore and build on the Affordable Care Act if elected, the Democratic presidential nominee said he thought Americans have a “right to have badakathcare.”

He continued: “Donald Trump thinks health care is a privilege, Barack and I think it’s a right to have badakathcare.”

The ex-VP has previously forgotten Mitt Romney's name, claimed 200million Americans have died of Covid-19, and repeatedly said he is running for "Senate" in 2020.

Biden, who has struggled with a stutter throughout his life, was also recently caught misreading “true international pressure” from his teleprompter last Saturday as “truaninonashufodopressure.”

The former veep has often made headlines for stumbling over his words, but Trump has also had his share of verbal gaffes.

In August, Trump appeared to mispronounce Yosemite as “Yo Semites” during a routine bill signing of the Great American Outdoors Act.

In April, Trump mispronounced “NAFTA” as “NASTA”, “neo-natal” as “neo-netical” and overdose as “overdoth.”

Trump also stumbled over the word “anonymous” in 2018 while attacking an op-ed in The New York-Times. 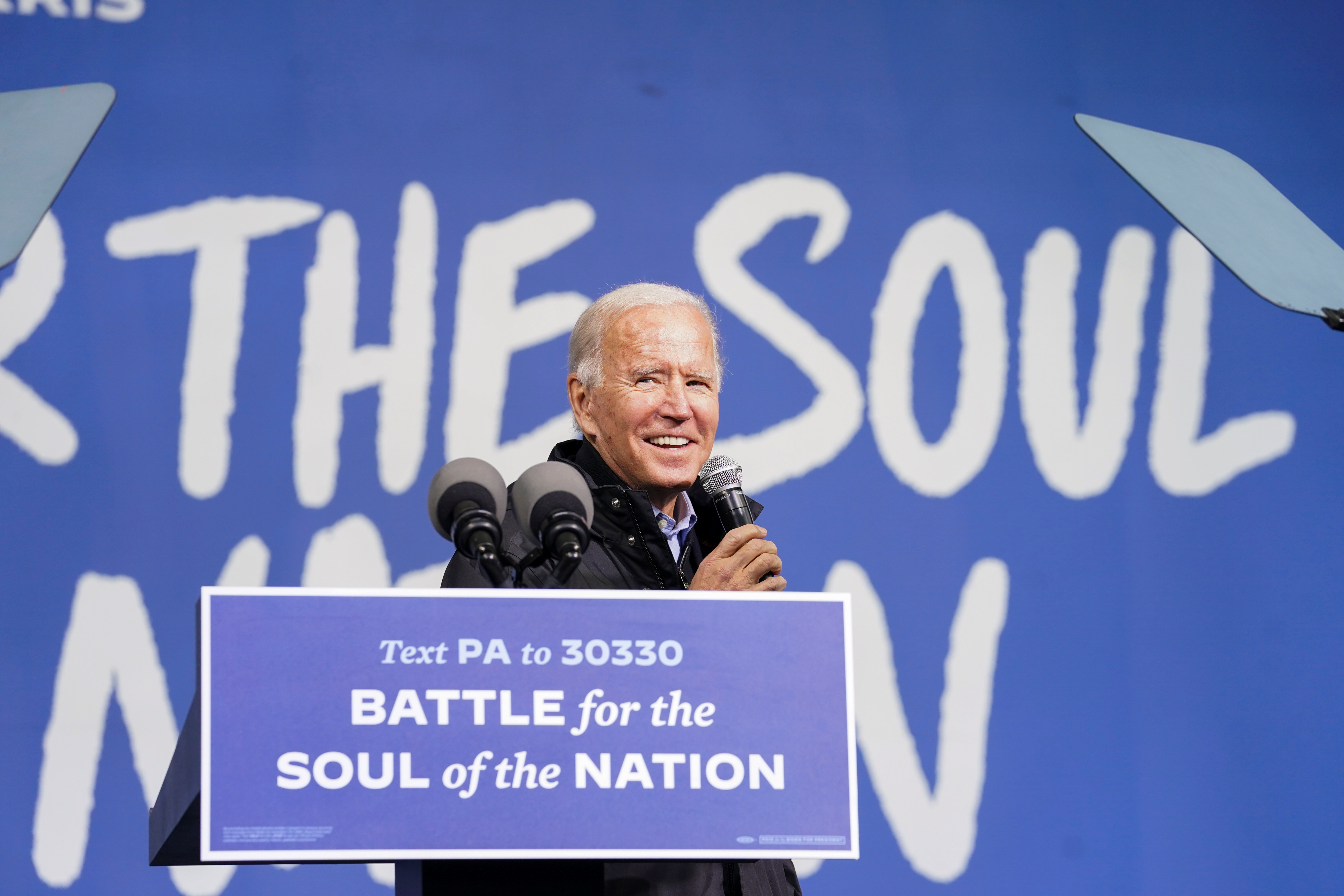 Biden is ahead 51% to 43% nationally in the latest Reuters/Ipsos poll, taken October 27-29Credit: Reuters 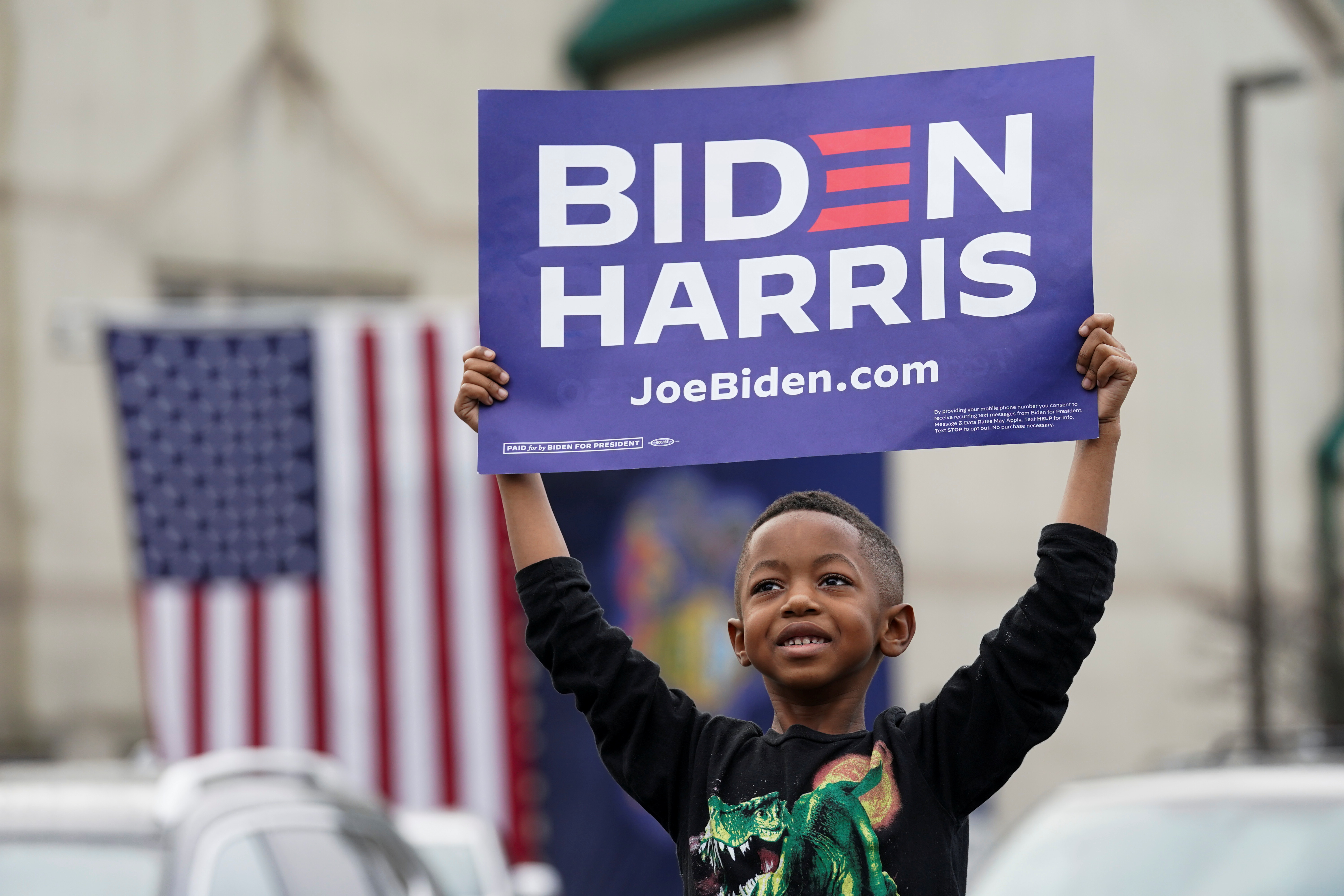