JOHNNY Depp was today found to have attacked ex-wife Amber Heard 12 times during their tumultuous relationship.

The Pirates of the Caribbean star, 57, has lost his blockbuster libel case against The Sun, who referred to him as a "wife-beater" in 2018. 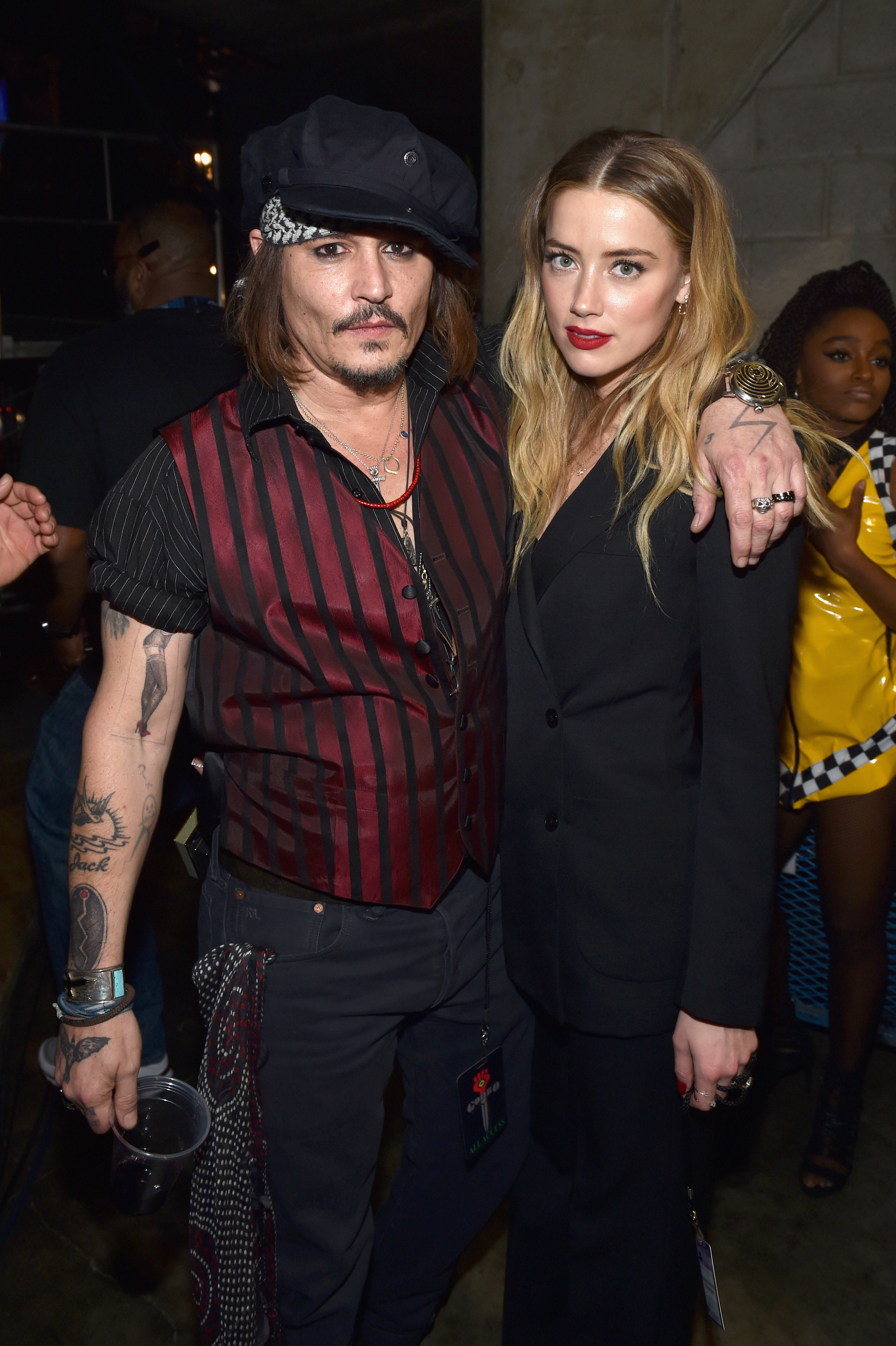 Over the course of three years, Depp was found to have lashed out at his ex-wife 12 times as he turned into his "monster" persona while bingeing on drink and drugs.

The star even tried to claim Heard was "building a dossier" to support "hoax" allegations against him.

But Mr Justice Nicol today said The Sun proved what was in the article to be "substantially true" as he detailed the 12 horrific attacks in his judgment.

Depp hit Heard for the first time when they were in LA after she laughed at his tattoo.

The actress said her then husband slapped her three times after she made a joke over the inking, which originally read "Winona Forever" in tribute to Winona Ryder but was then changed to "Wino Forever" after they split.

He also knocked her to the ground before apologising and blaming "the monster".

But Depp denied hitting her, saying she had seen the tattoo "countless" times before the incident happened. 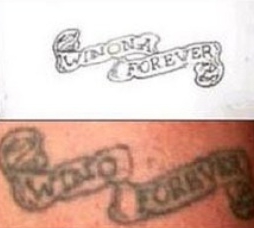 The first incident of domestic violence was after Heard laughed about Depp's altered tattoo, it has been claimed

Depp hit Amber in a jealous row over a painting by her ex-partner Tasya Van Ree.

It was heard in court that Depp hit her "so hard that blood from her lip ended up on the wall" and that he tried to set fire to the painting.

The star later referred to the incident in a text as "disco bloodbath" but said in court it was to placate his wife, and was not an apology. 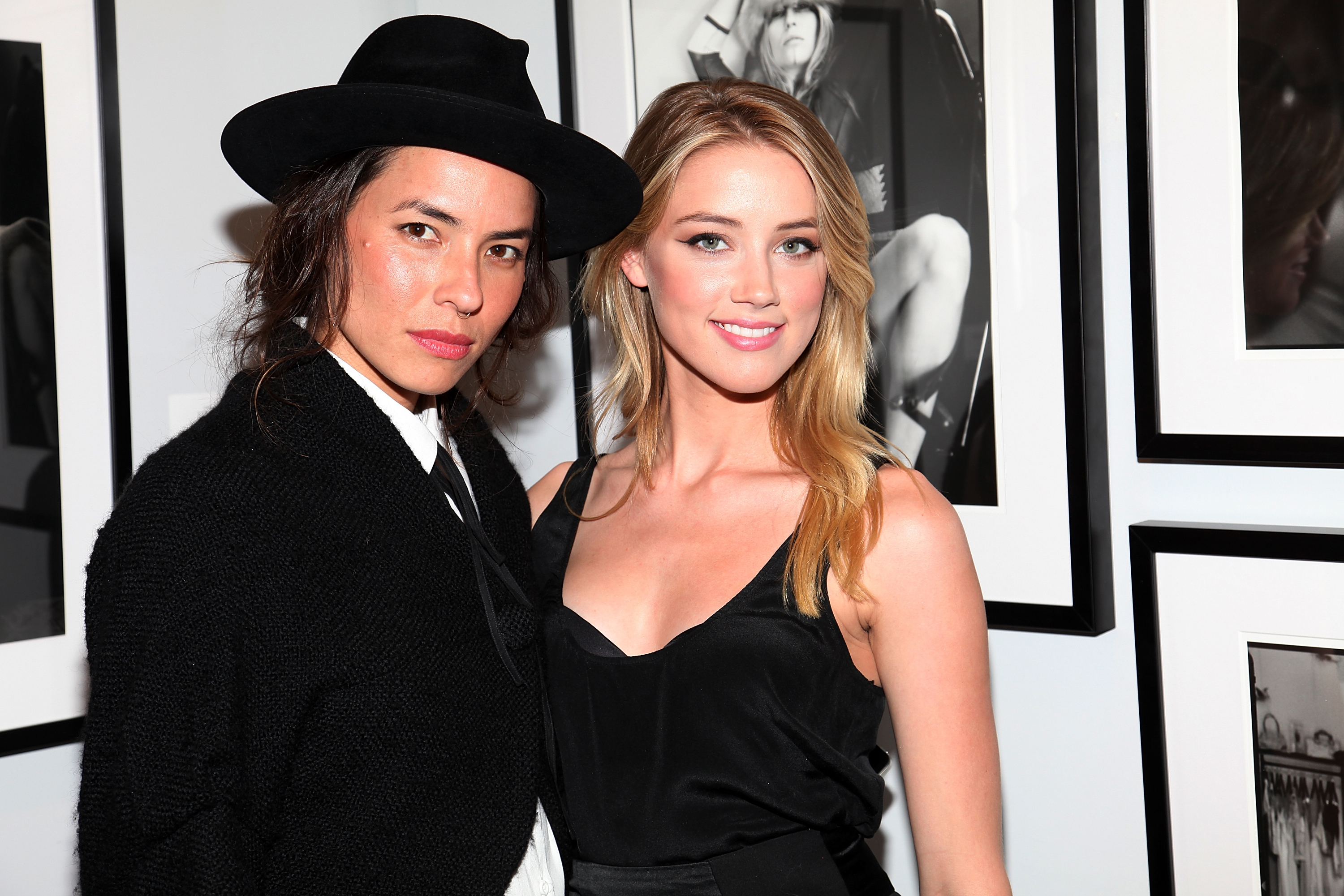 One of the arguments between the couple was over a painting of Heard's ex-partner Tasya Van ReeCredit: Getty - Contributor

Heard and Depp were in Hicksville, US with a group of people including Heard's sister Whitney and Mr Depp's assistant Nathan Holmes.

Heard claimed her then husband had been "taking drugs" became "enraged" and "jealous" when one of her friends touched her.

She said that he then threw glasses at her, ripped her dress and damaged the cabin they were staying in. 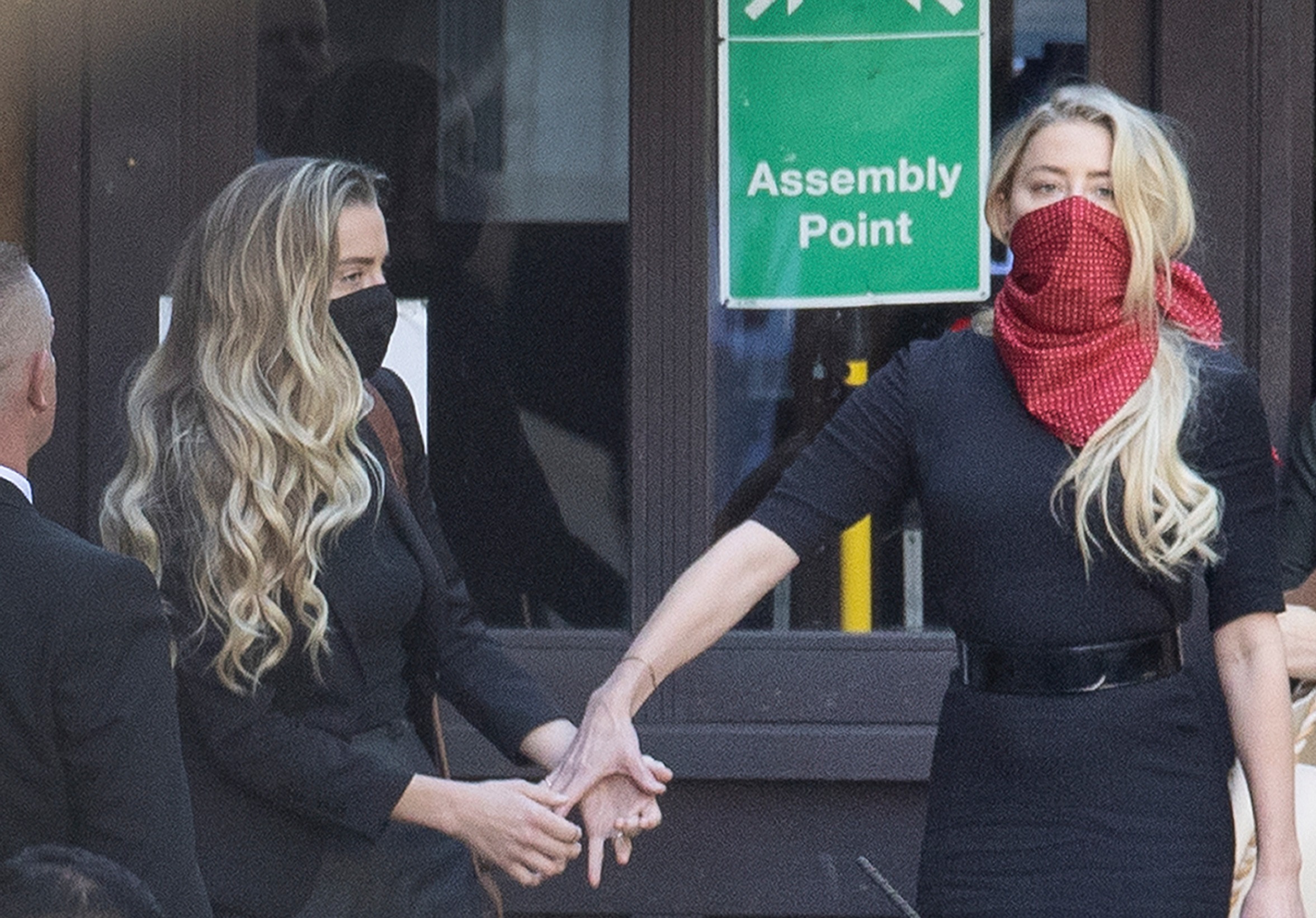 Amber Heard is seen here outside court being supported by her sister WhitneyCredit: London News Pictures

Depp chucked a chair at Heard and slapped her after a booze-binge on private jet from Boston to LA.

It was claimed he had believed his wife was having an affair with actor James Franco.

The actor screamed at Heard and kicked her before passing out in the plane toilet.

Depp, who denies the claims, instead claimed that it was Heard who was "berating" and "screaming" at him.

Depp lashed out at his ex as she was "withholding meds" from him on a detox trip to his private island in the Bahamas.

He pushed Amber to the ground and slapped her and grabbed her by the hair, the judge ruled.

While the couple were in Tokyo, Japan, Depp slapped Heard and grabbed her by the hair, before standing over her and shouting while she was on the floor.

The star was high on drugs at the time of the attack, which left Heard crying on the ground as Depp yelled over her.

The actor had grown jealous of Heard's London Fields co-star Billy Bob Thornton and was enraged by her not signing a pre-nup.

He went on a "violent rampage" - trashing the rented home they were staying in and repeatedly attacking Heard.

He left her with a broken lip, swollen nose and cuts all over her body affter hitting her in the face and choking her. 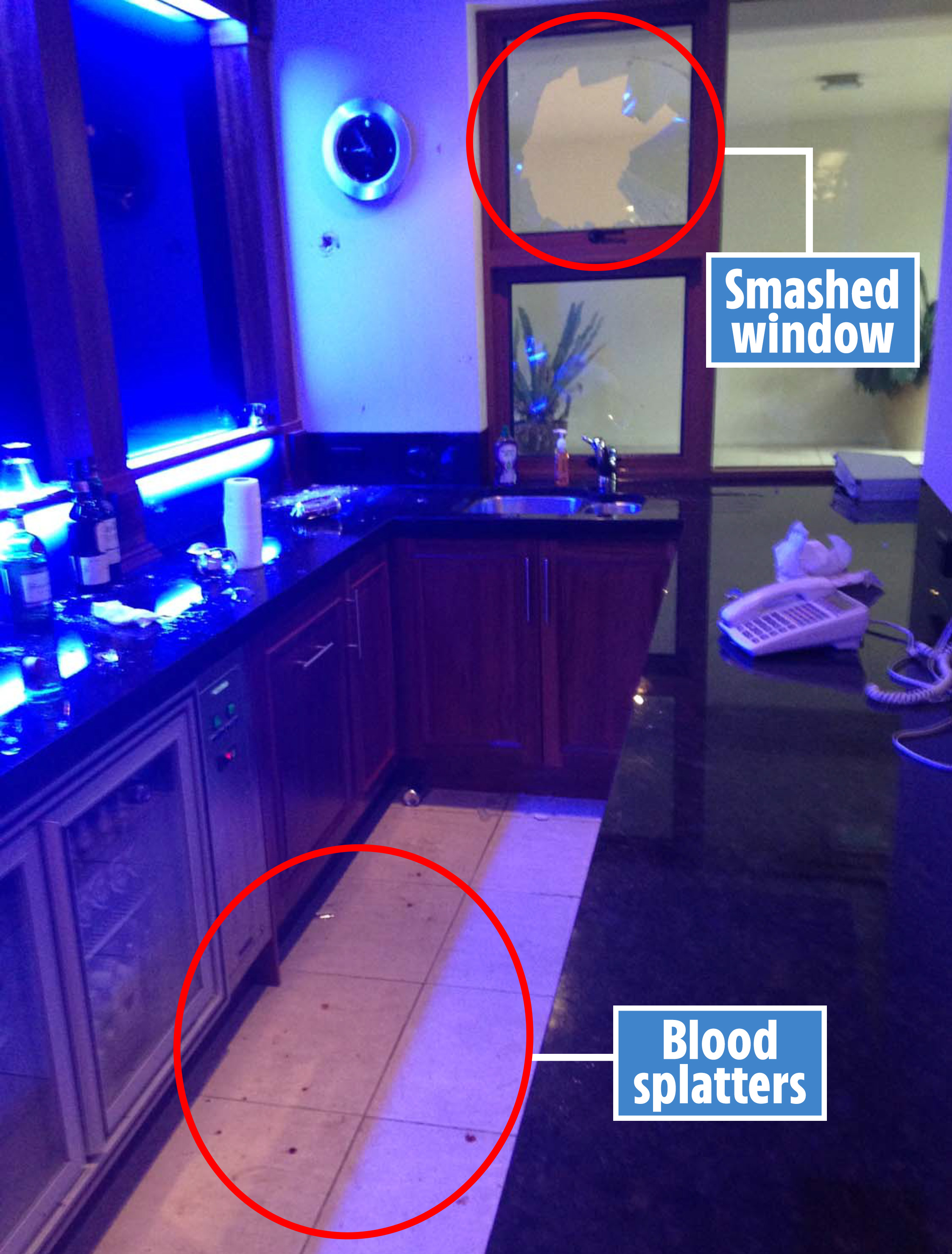 The scene after one attack in Australia 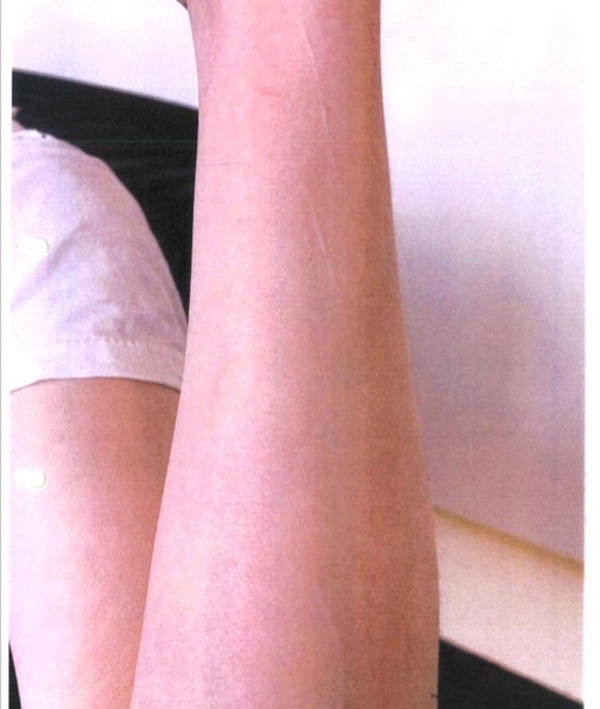 One of the injuries Heard said she suffered in the rampage

Depp also pushed her to the ground, spat on her face and chucked glass bottles at her.

During the carnage, Depp's finger was severed - with the actor claiming Heard threw a vodka bottle at him.

The actor then used his severed finger to write "I love u" on the mirror.

But the judge rejected this was the case and said he couldn't be sure how the injury happened. 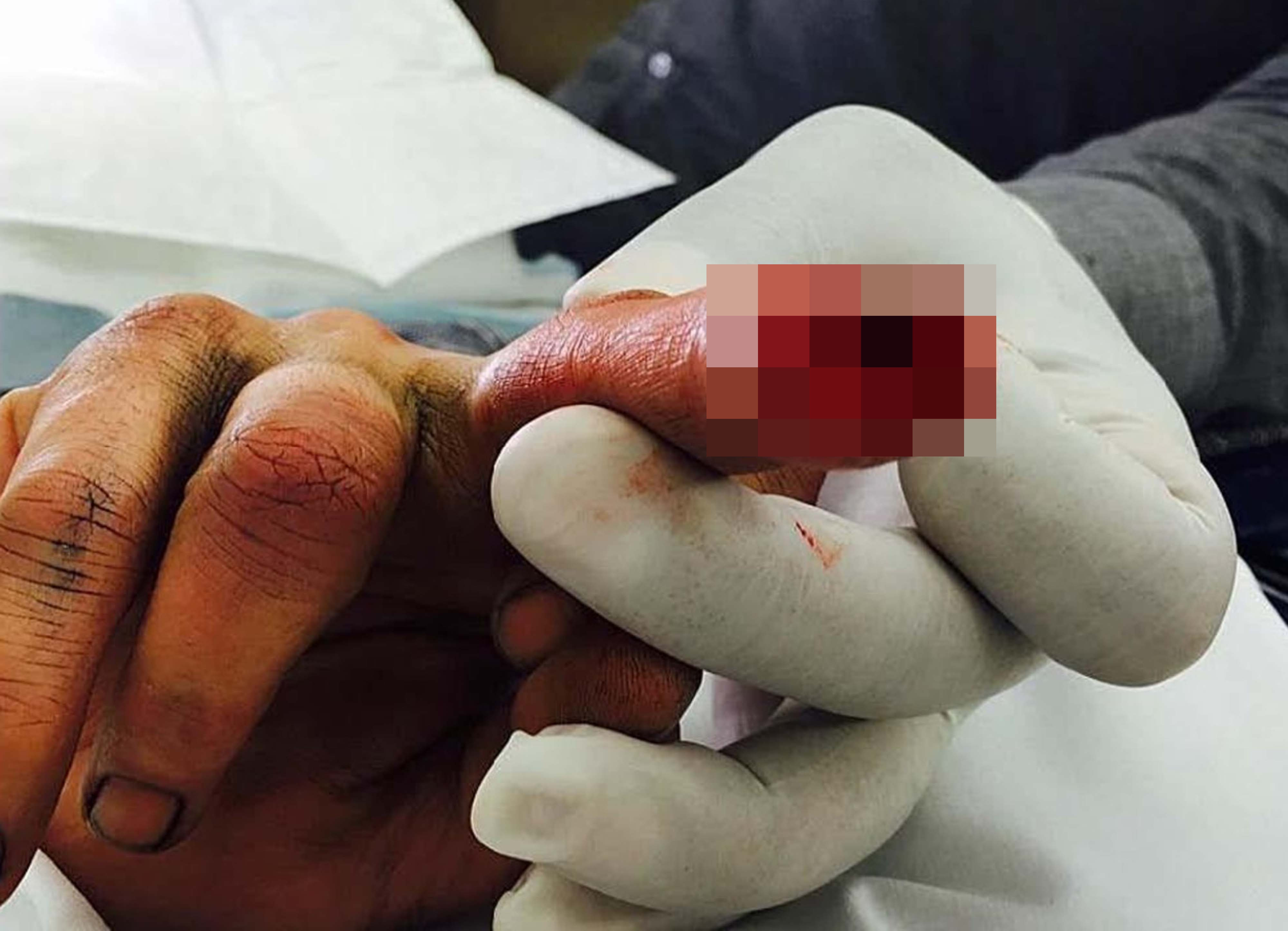 Depp severed his finger after assaulting his wife in Australia, it was claimedCredit: PA:Press Association 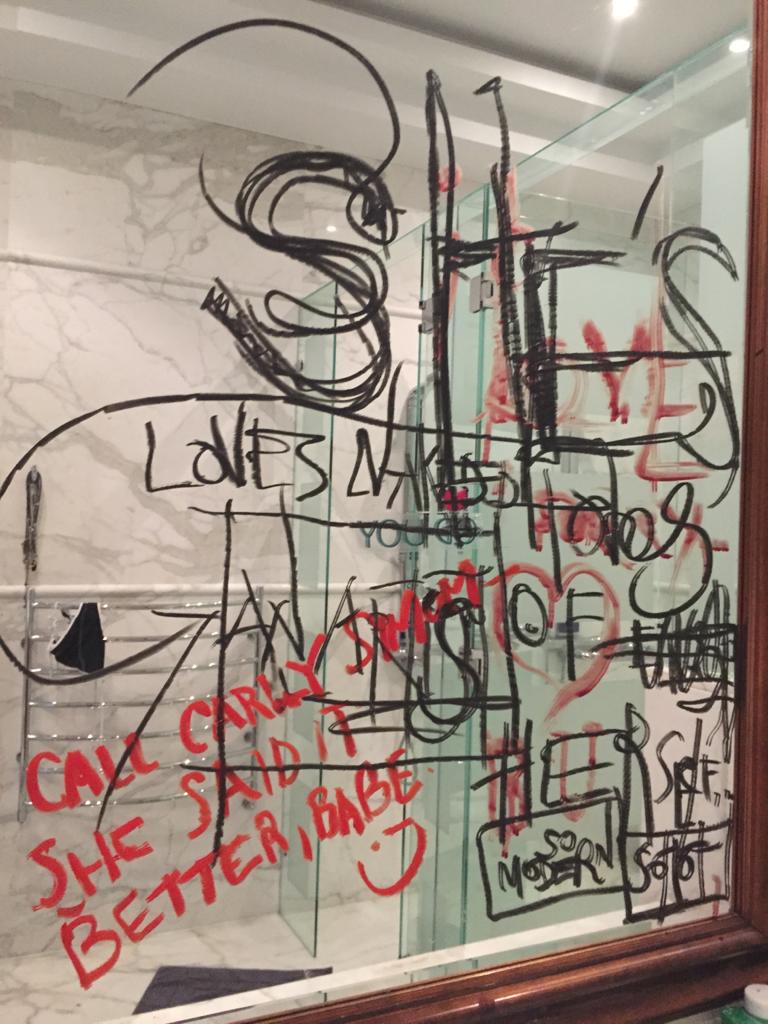 During a row at the couple's LA penthouse, Depp grabbed Heard's hair and repeatedly hit her in front of her sister Whitney.

Depp tried claiming Heard was "berating him in a rage" as he tried to leave and threw a can of Red Bull at him and punched him in the face before he finally left.

While on honeymoon on the Eastern and Oriental Express in south east Asia, Depp "pushed her against a wall by the throat causing her to fear for her life".

Depp admitted he headbutted Heard at their LA penthouse, but in court this week claimed it was "accidental".

During the incident, Depp threw a decanter at her and pulled out "large chunks" of her hair, while yelling: "I'll f***ing kill you".

He dragged her through their apartment and twice shoved her at the top of the stairs - causing Amber to fear she would fall.

After repeatedly hitting her, Depp then deliberately headbutted Heard - causing her nose to bleed.

He then shoved her to the ground and punched her in the back of the head before continuing to slap her in the face.

The horrific ordeal left Heard fearing for her life as Depp placed his knee on her back and pushed her face into the mattress.

Heard was then covered in make up and appeared the next day on the James Corden show. 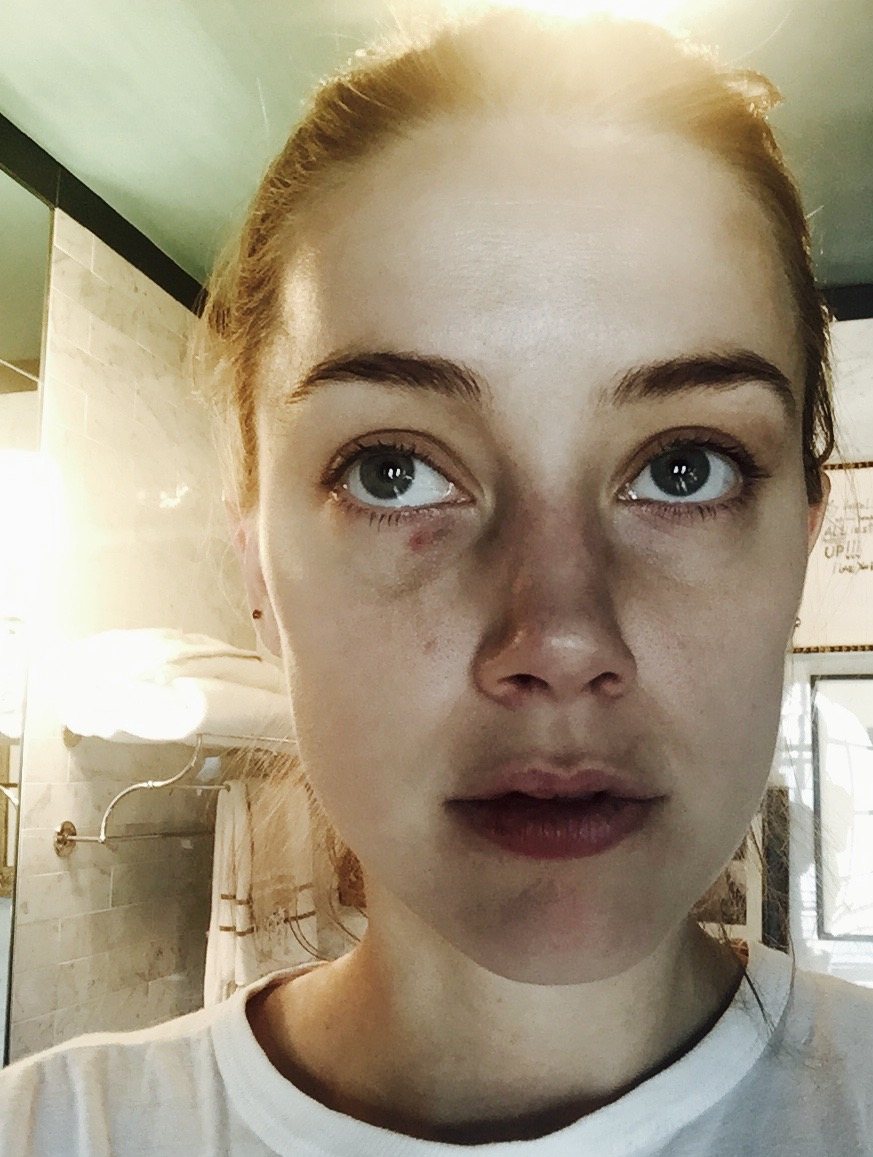 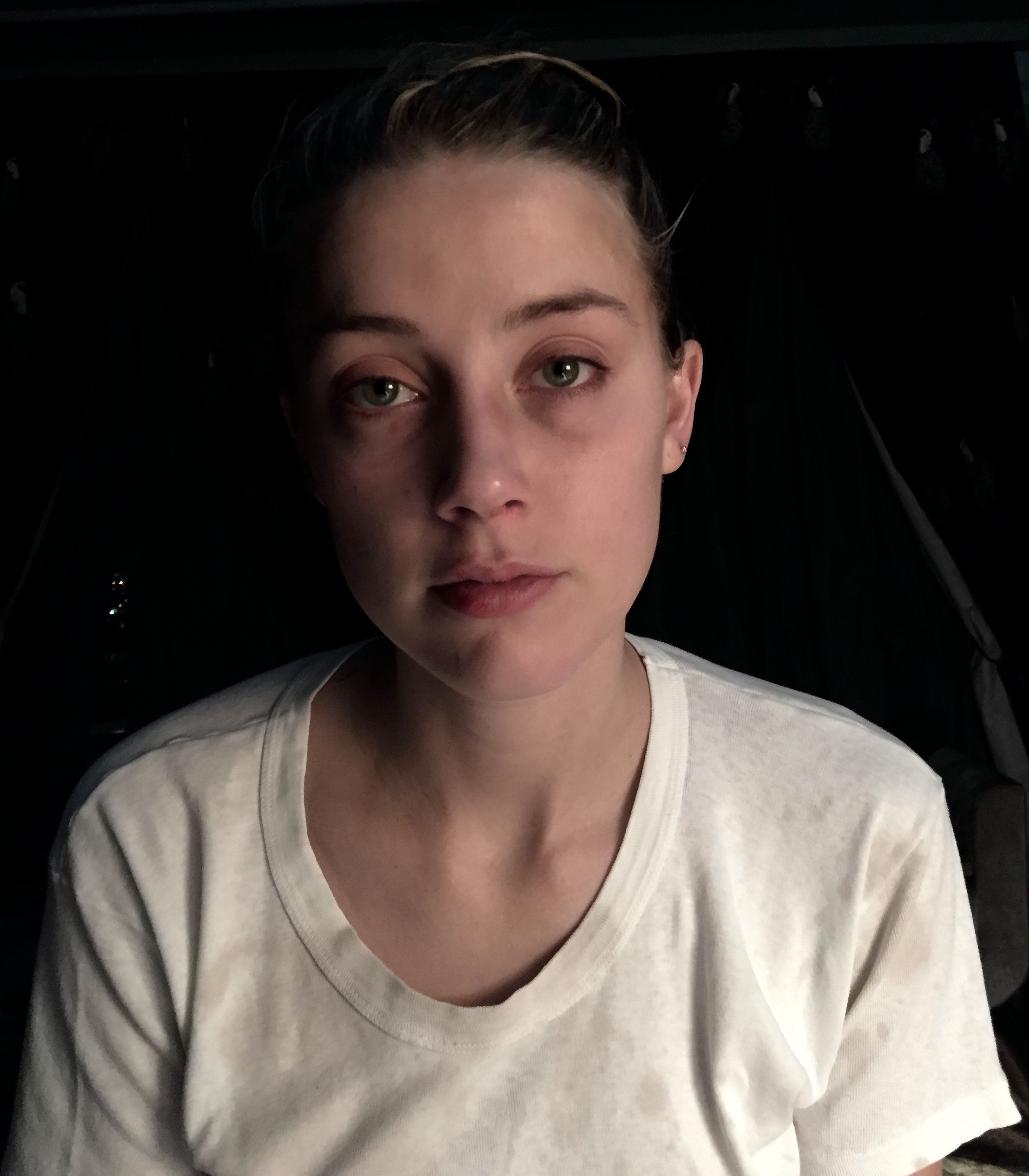 Heard was left with bruises after altercations during the couple's marriage 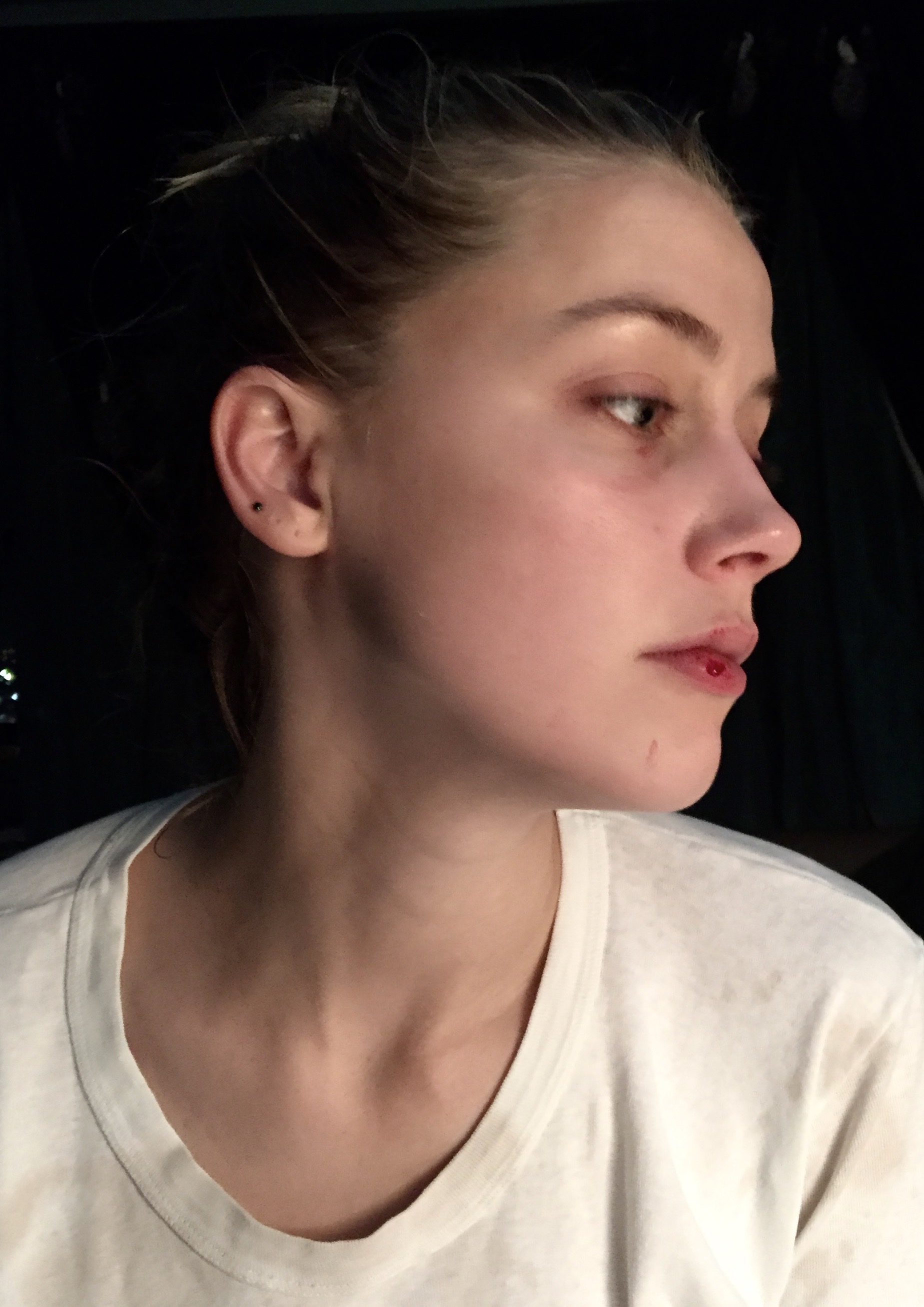 Heard said she was left fearing for her life 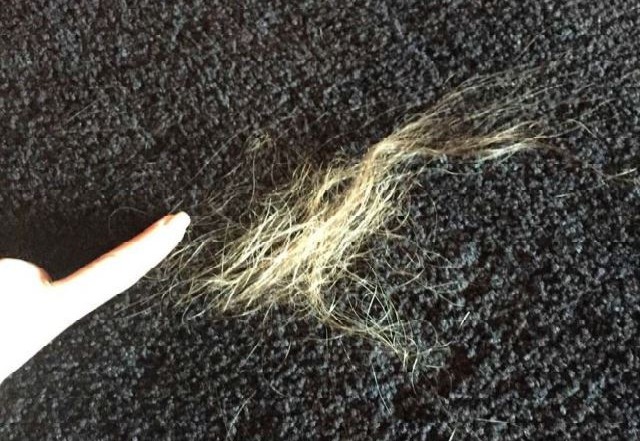 Depp arrived late to Heard's 30th birthday party while on cannabis and cocaine after receiving "grim" news about his finances.

He chucked a magnum of champagne at his wife and claimed she pooed in their marital bed after the cleaner found faeces.

The judge today ruled the deposit was not Amber's, and instead from one of her dogs. 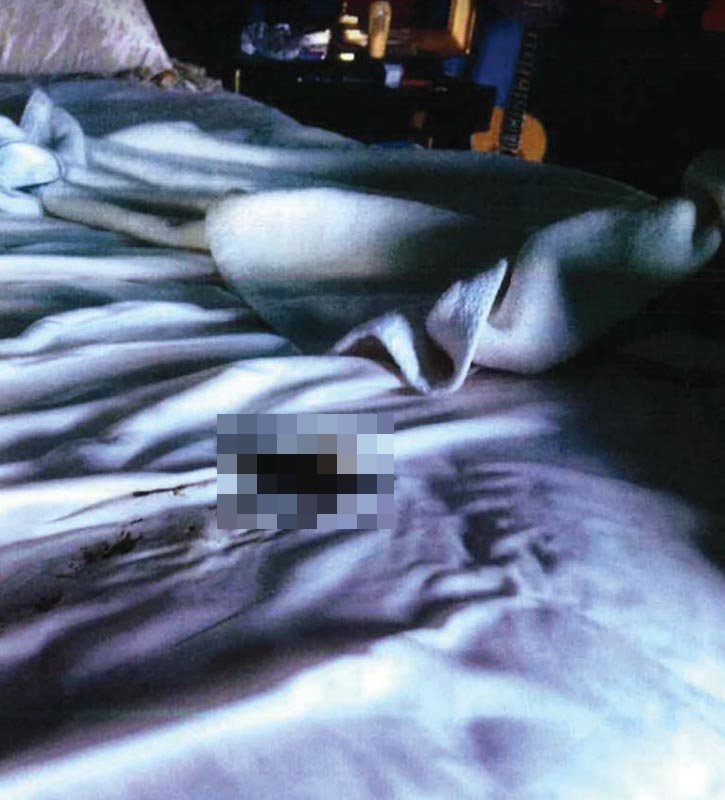 Depp even claimed Heard had pooed on their marital bed

Depp arrived at the couple's LA apartment "drunk and high".

He threw a phone at Heard - injuring her cheek and eye - and pulled her hair.

Depp then hit Heard and violently grabbed her face. 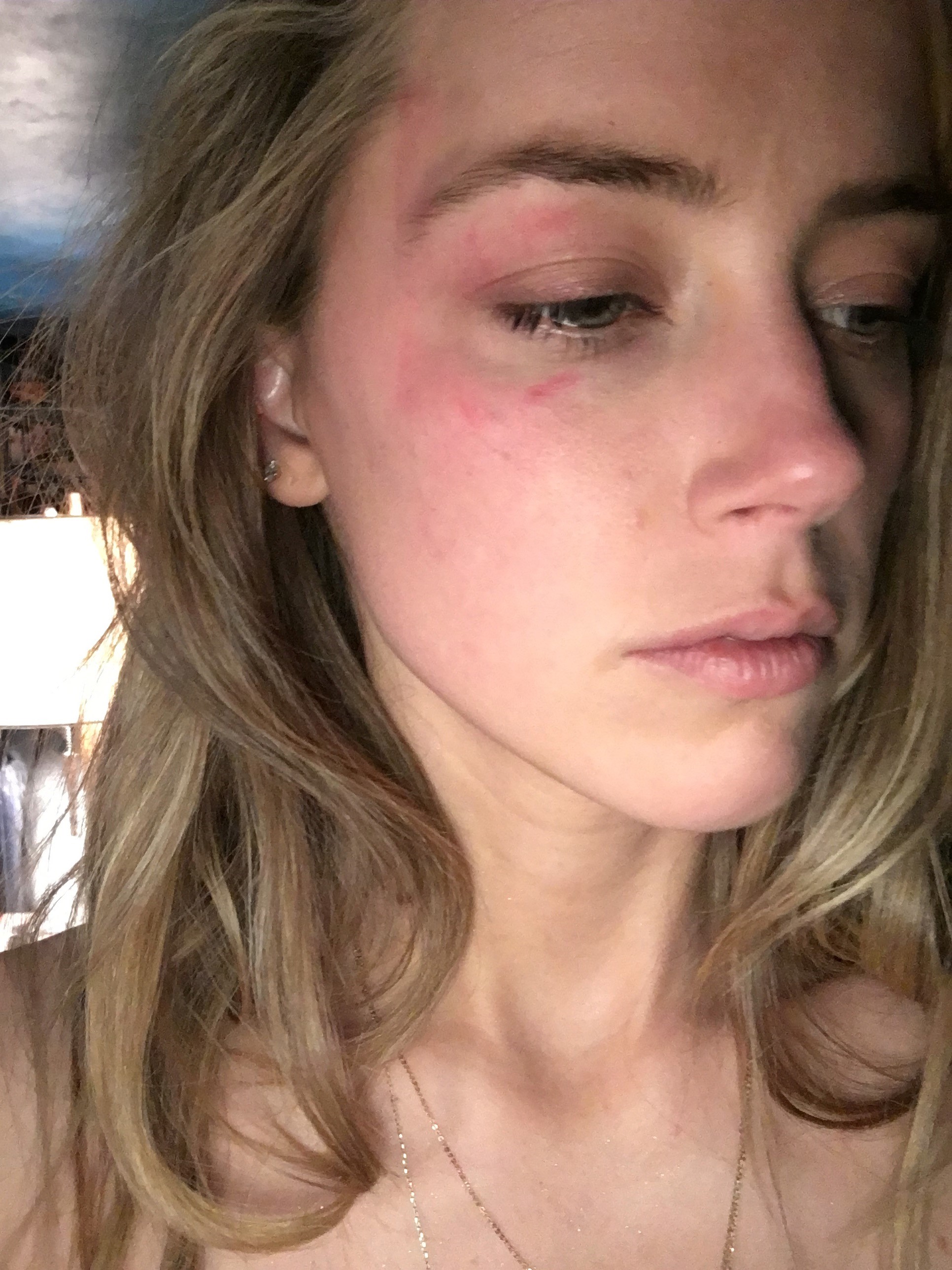 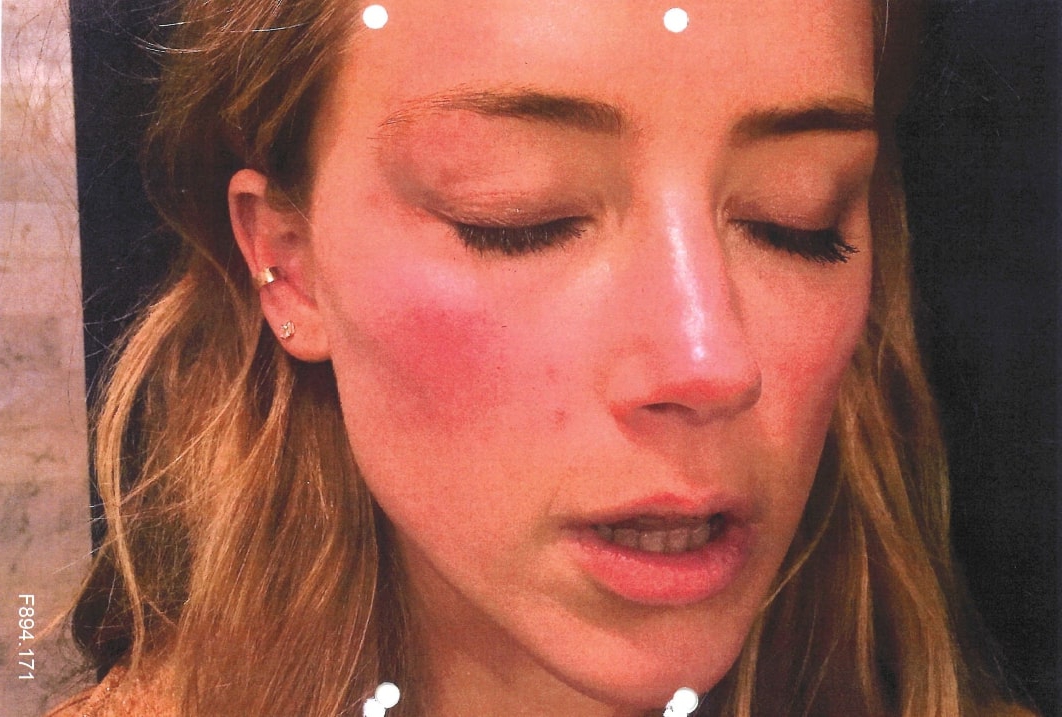 Depp chucked a phone at the star