Kids will beg their parents for a pet more than 1,500 times before they’re 18 years old

A SURVEY of 2,000 parents of school-aged children found 74% of kids have asked for a pet, and they ask for one an average of 11 times per month starting at age 6.

But they’re not asking in vain: two-thirds of parents have, eventually, given in — and it’s after their child has been asking for three years, on average.

A survey of 2,000 parents of school-aged children found 74 percent of kids have asked for a petCredit: Getty Images - Getty

Conducted by OnePoll and commissioned by Spin Master, the survey revealed the most coveted pet is a dog — 78% have asked specifically for a dog.

And parents should be even more prepared to hear, “Can we get a puppy?” as we enter the holiday season.

Sixty-two percent of children who’ve asked their parents for a pet double-down during the holiday season, and they ask seven more times per month.

And some kids might soon get to experience the joy of a furry friend: a third of parents surveyed are planning to buy their child a pet this holiday season. 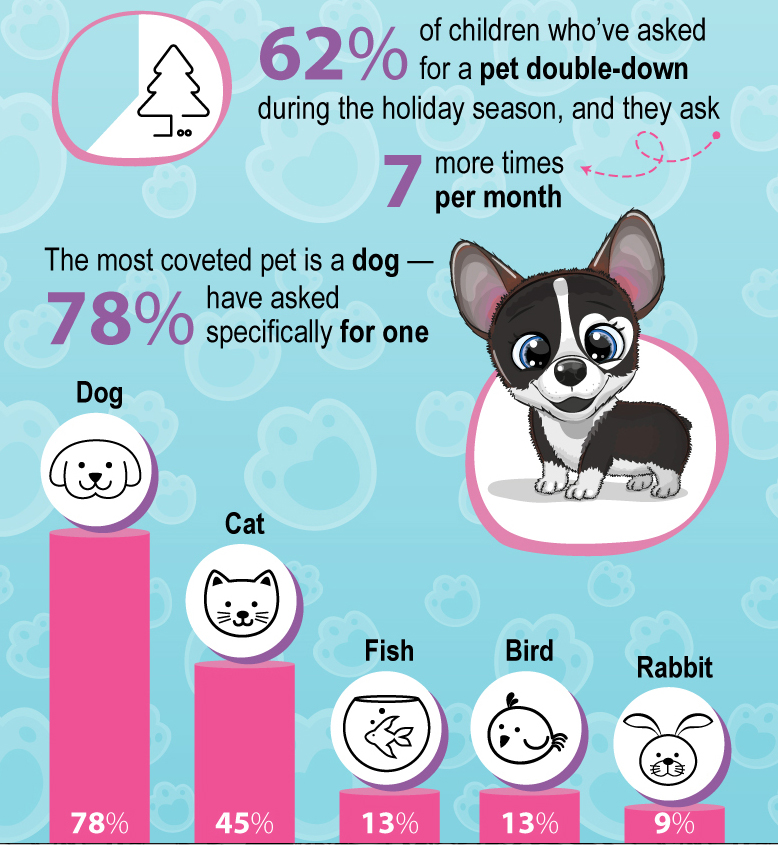 Looking back to their own childhood, 46% received a pet as a present — and 89% of those said it was the best present they ever received.

“As some parents remember from their own childhood, receiving a pet for the holidays leaves a lasting impression — the ultimate surprise and moment of pure joy can be delivered during the holiday season, without the responsibility (or clean up) of a live pet.”

While kids are asking (and asking, and asking) their parents for a pet, the survey found they need to do more than just that.

Looking back to their own childhood, 46 percent received a pet as a presentCredit: Getty Images - Getty

Parents felt it was important to start small and build up to getting a new pet (78%) — which might be one of the reasons 25% of respondents wanted their child to show they could care for a toy pet before receiving a live one.

“A toy pet can bring so much excitement and joy, while also acting as a step toward getting a real pet,” said Gomez.

82 percent of parents surveyed believe it’s important for children to be introduced to and spend time with animalsCredit: Getty Images - Getty

“And while some parents may say no when asked ‘can we get a puppy’, an interactive pet like Present Pets that barks and paws its way out of the box can deliver that magical experience for the whole family.”

Eighty-two percent of parents surveyed believe it’s important for children to be introduced to — and spend time with — animals.

Learning to play gently (58%), learning responsibility (57%) and being encouraged to spend time outdoors (46%) were found to be the top benefits of growing up with pets.

Cats are among the pets that kids are most likely to ask forCredit: Getty Images - Getty

WHAT PETS ARE KIDS MOST LIKELY TO ASK FOR?

HOW MANY TIMES DO KIDS ASK FOR A PET?

74% of kids have asked their parents for a pet They first ask at age 6, on average Kids ask 11 times per month — with an additional seven times during the holiday season (making it 18 times per month) This adds up to 1,584 times by the age of 18
Read Entire Article