"Keir said he was taking full responsibility for the result of the elections - and he said we need to change," a Labour source told Sky News.

Rayner remains the party's deputy leader as that is an elected position.

It comes after Boris Johnson completed a hattrick of stonking victories in Labour’s former heartlands.

Conservative Andy Street this afternoon stormed reelection as mayor of the West Midlands with a swelled majority, following yesterday’s Tory wins in Hartlepool and Tees Valley.

Mr Street, who sneaked a surprise victory in 2017, put more than 47,043 votes past his Labour rival, the former Cabinet minister Liam Byrne.

The triple-whammy defeat has sparked serious soul-searching within Labour - as well as a furious blame-game among rival factions.

Some small comforts were taken with Labour holds in the Manchester and Liverpool mayoral races, with London also set to stay red.

Allies of Sir Keir rallied round their leader, and pointed to the pandemic as a hindrance to his ability to campaign.

Read our Local Elections 2021 live blog below for up to the minute updates...

Andy Burnham is the bookies’ favourite to replace Sir Keir Starmer as the Labour leader endures a nightmare at the top.

The Greater Manchester mayor is ahead of shadow Cabinet minister Lisa Nandy in the betting stakes.

Sadiq Khan, who has four years’ experience as London mayor, and shadow Cabinet colleague Rachel Reeves, a former economist at the Bank of England, are also tipped for the top job.

Sheffield City mayor Dan Jarvis, a former paratrooper, could also be in the frame with his Red Wall credentials. He is also the Labour MP for Barnsley Central. 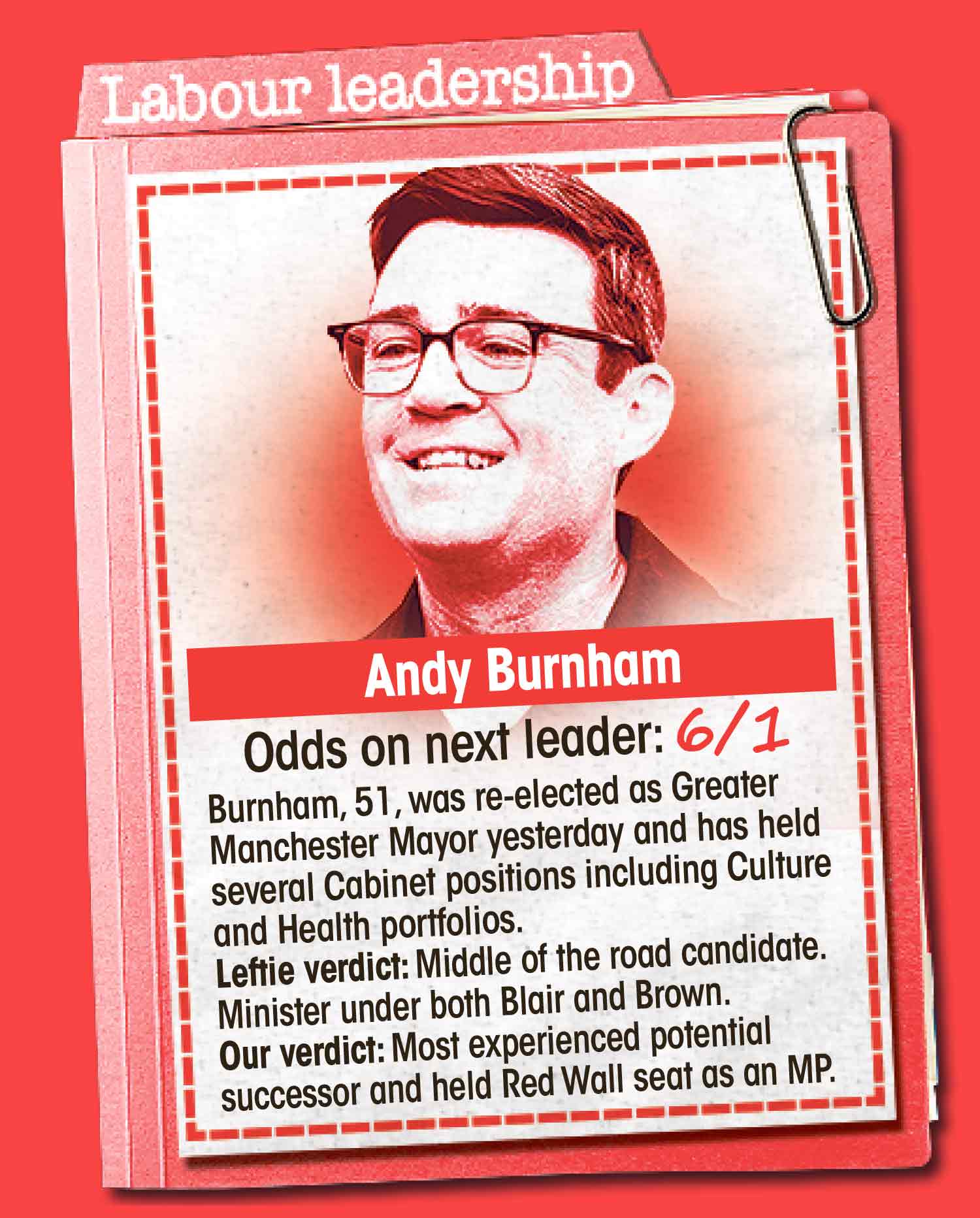 Sadiq Khan has been reelected as London Mayor after beating out his rival Shaun Bailey.

It comes after an overnight scare for the Labour incumbent when the race for City Hall proved much tighter than expected. 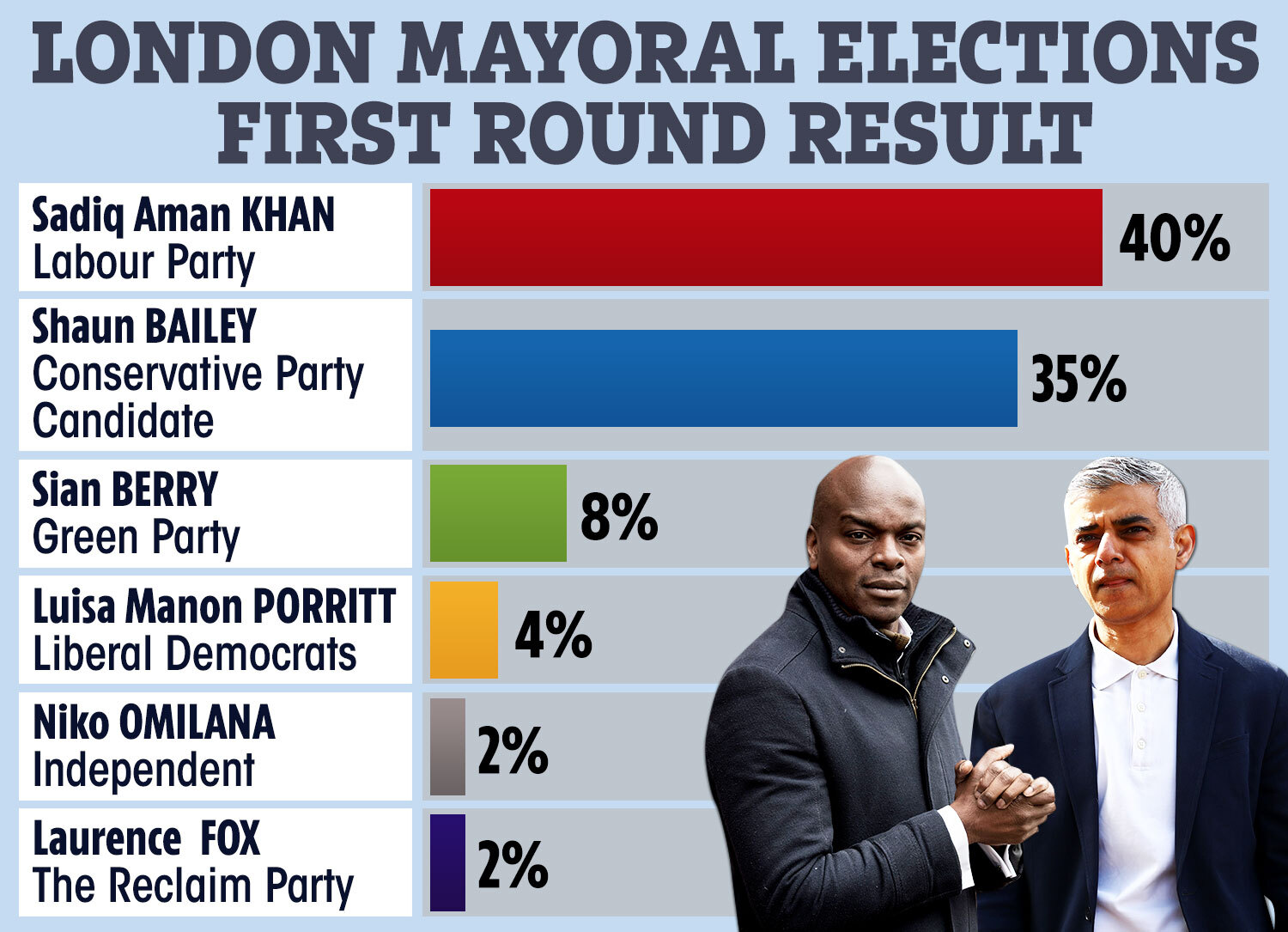 Nicola Sturgeon today demanded a new independence vote despite falling short of a majority and the PM rejecting her "reckless" plans.

Boris Johnson said he will block any requests for another referendum, but the First Minister hit back: "You will not succeed."

The Nats won a fourth consecutive term at Holyrood, but tactical unionist voting saw them fall short of a majority.

The Tories held the crucial battleground of Aberdeenshire West, as the SNP won 64 seats - one short of a majority.

It blows off course Ms Sturgeon's plans to wield an SNP majority to demand a second independence referendum.

But she claimed the likely pro-independence majority with the Greens still commands a mandate for a fresh vote.

If last Thursday’s results were replicated in a national poll, the Tories could win 36 more seats off Labour.

One Labour MP said: “We don’t have much time – and that means neither does Keir.

“Boris Johnson is riding high on the success of his vaccine programme and is likely to go to the polls early — possibly in 2023.

“If things don’t improve in the next 12 months, we’re going to have to decide whether to stick with Keir in the run-up to an Election or to cut our losses and bed in a new leader in time to save us from wipeout.”

As rival factions began looking for a candidate they could unite behind yesterday, Sir Keir was holed up with his inner circle at Labour HQ.

A shadow Cabinet source said: “The leadership has gone into a bunker.

“He came in with a lot of goodwill but now he’s squandered it.”

Sir Keir is on the ropes as Boris Johnson looked set for a decade in power after a wave of stunning victories in Labour’s crumbling “Red Wall” territory.

Bruised Sir Keir Starmer pleaded for more time to save his pummelled party yesterday as MPs began the search for his successor.

Rival factions were openly discussing their favoured candidate to run for the top job when Sir Keir falls on his sword.

To add to his woes, Andy Burnham effectively threw his hat into the ring — and was swiftly installed as 6-1 favourite to be next leader.

Minutes after being re-elected as Mayor of Greater Manchester, he teasingly urged his Westminster colleagues to “get in touch”.

WHAT IS SADIQ KHAN'S MANIFESTO?

Labour's candidate for the mayoral office is focusing on what he sees as five key areas based around the slogan "building a brighter future".

WHY WAS ANGELA SACKED AS LABOUR PARTY CHAIRMAN?

It comes after the party's humiliating loss of the Hartlepool byelection.

Humiliated Keir yesterday took “full responsibility” for the “bitterly disappointing” results as he desperately scrambled to save his leadership and party from extinction.

However, he today pushed her into the firing line, with people believing he used her as a "scapegoat.

Gaya Sriskanthan, Momentum co-chair, said: “It is his failed strategy that has brought us to this point, and he said he would take responsibility. Yet again he has gone back on his word.”

HOW DO THE ELECTION RESULTS LOOK NOW? 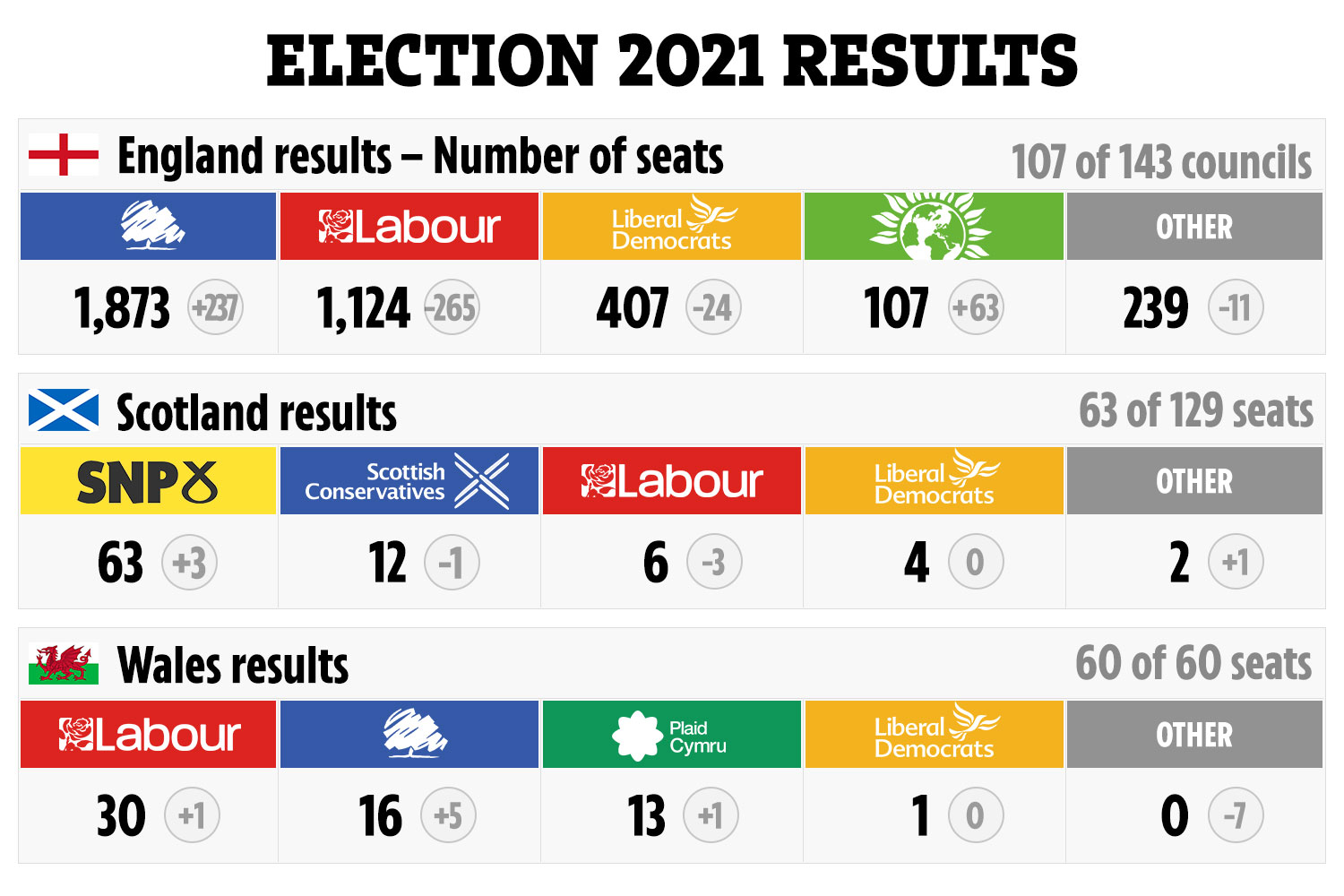 Deputy Labour leader Angela Rayner has been sacked as party chairman in the aftermath of election results.

She is a solicitor and was raised in the Islamic faith.

Two years ago Khan was branded a hypocrite after he criticised workers who get paid through their own company - even though Saadiya did the same thing.

The Mayor of London's solicitor wife Saadiya has raked in thousands through her own "personal service company".

The Sun revealed that Mr Khan's wife, who practices law under her maiden name Saadiya Ahmad, funnels some earnings through her own "consultancy" firm.

TORIES GET THEIR HATRICK

Conservative Andy Street this afternoon stormed reelection as mayor of the West Midlands with a swelled majority, following yesterday’s Tory wins in Hartlepool and Tees Valley.

Mr Street, who sneaked a surprise victory in 2017, put more than 47,043 votes past his Labour rival, the former Cabinet minister Liam Byrne.

The triple-whammy defeat has sparked serious soul-searching within Labour - as well as a furious blame-game among rival factions.

STURGEON LAYS DOWN GAUNTLET TO BORIS

Nicola Sturgeon dared Boris Johnson to block a second independence referendum, saying: "You will not succeed."

Although she failed to secure an outright SNP majority, the First Minister said the likely pro-independence majority with Greens commands a mandate for Indyref2.

She told the BBC: "‘For any Westminster politician who tries to stand in the way of that I would say two things.

“Second, you will not succeed. The only people who can decide the future of Scotland are the Scottish people, and no Westminster politician can, or should, stand in the way of that.” 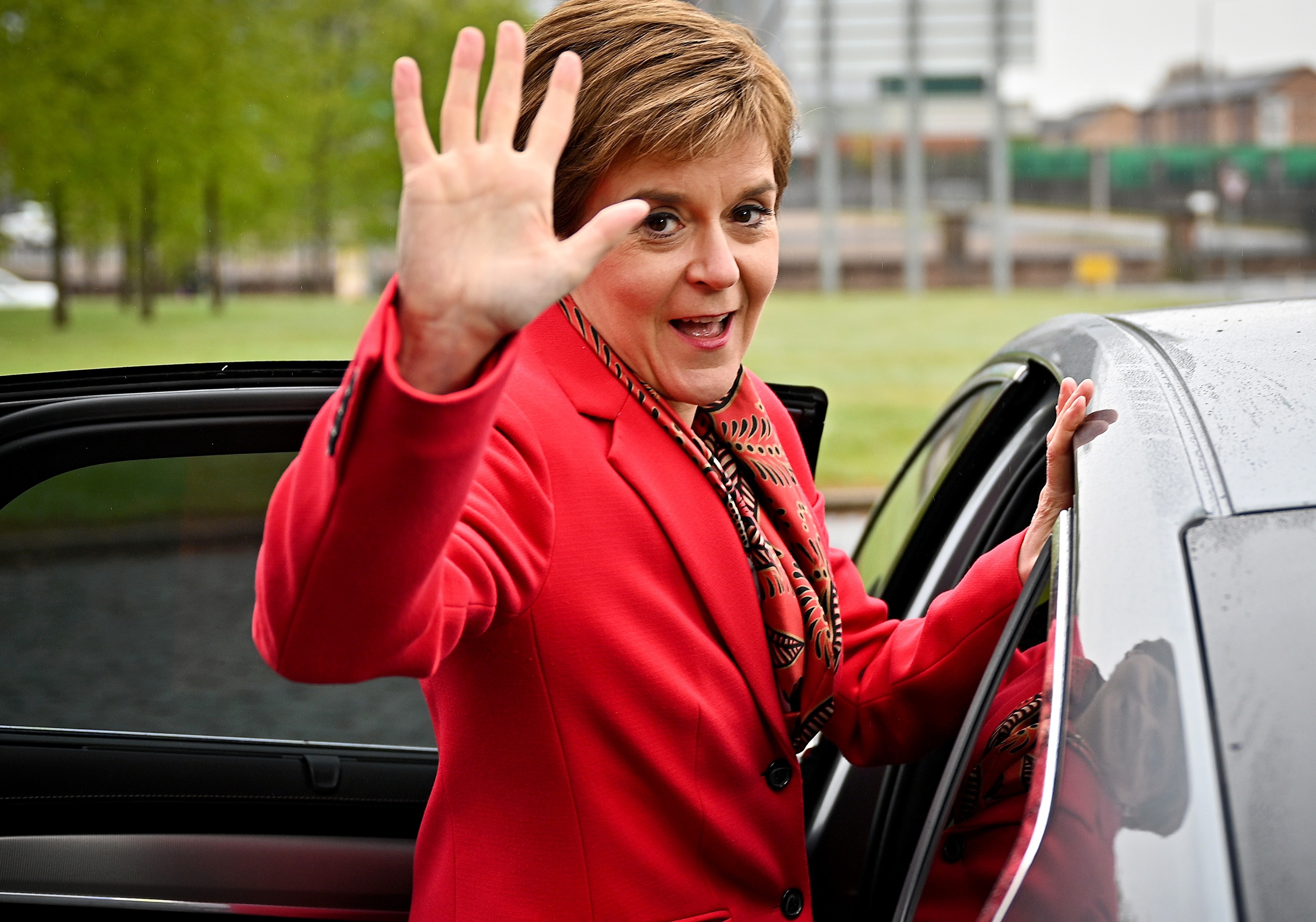 The position had been held by Tory TIm Bowles, who stood down at this election.

Mr Norris said: "It's a huge honour to be elected. Thank you.

"I will show the difference an active metro mayor makes for our region. This role is about collaboration and I'll listen carefully and work co-operatively."

The SNP have lost the Aberdeenshire West constituency to the Tories, all but dashing Nicola Sturgeon's hopes of landing a majority.

As predicted, Andy Burnham cruised to an emphatic win to be reelected Mayor of Greater Manchester.

In his victory speech he said: "I will continue to adopt a place-first, not a party-first approach.

"Where the government gets it right and treats us fairly I will work with them.

"But where they don't I will challenge them for you as forcefully as I can. Greater Manchester deserves nothing less."

Sadiq Khan was this afternoon inching towards reelection as London mayor after some early jitters.

The Labour incumbent had taken 40 per cent all counted votes at 4pm, pulling away from his Tory rival Shaun Bailey on 35 per cent.

The race for City Hall has proved much tighter than expected, with some pre-election polls projecting Mr Khan to cruise to a first round victory.

As things stand the contest will go to second preference votes, which will likely push Mr Khan over the line. A result is not expected until 9pm.

Before yesterday there were no Conservative councillors in Rotherham. Now there are 20. These are the Red Wall 2.0 areas.

TORIES JUST SHORT OF FIRST ROUND VICTORY IN WEST MIDLANDS

Andy Street fell slightly short of winning the West Midlands mayoralty in the first round of voting.

Counting of second preferences will now take place, with a result likely declared in the next couple of hours.

A Labour loss in their former heartlands would be another crushing blow for Sir Keir Starmer, who should be winning in these areas.

SNP MAJORITY "ON A KNIFE EDGE"

The leader of the Scottish Conservatives has said the SNP's chances of a majority are too close to call.

All results are due to be announced within the next few hours, but it is clear Nicola Sturgeon's party are cruising to a fourth term at Holyrood.

All eyes now are on whether they can win 65 seats - enough for a majority.

Scots Tory leader Douglas Ross said of her chances of clinching a majority: "It's on a knife edge and that's where we still are.

"There are crucial seats still to declare and the picture will be clear by the end of today. But absolutely it is extremely close."

A member of Sir Keir Starmer's frontbench team has said Labour has been "talking to ourselves" for too long.

She told the BBC: "It’s very clear that we do need to accelerate the change in the Labour party but also the vision we have for the country."

She added: "For too long as a party we have been talking to ourselves, looking inward. We’ve not been addressing the issues."

Labour will form the next government in Wales after winning 30 out of 60 seats.

Mark Drakeford was left one shy of a majority after counting finished and all constituencies declared.

He could look to form a coalition with other parties such as the Lib Dems, but health minister Vaughan Gething today said they could govern alone.

Alex Salmond said the votes his Alba Party has received are likely not enough to win them any Holyrood seats.

The former first minister said: "I've obviously looked at the ballot boxes at the count and they've given us some very good ones - Aberdeenshire had over 10 per cent in a couple of the ballot boxes

"But in some of the big ballot boxes, I think we ended up over three 3 per cent in Aberdeenshire East, the same in Banff and Buchan, a bit more actually, which I'm pleased with because these are our best results in Scotland.

"But that doesn't get you a seat. You need 4.5 per cent, maybe 5 per cent to get a seat. But nonetheless its a credible performance for a party which has just celebrated its sixth birthday - in other words we are six weeks old." 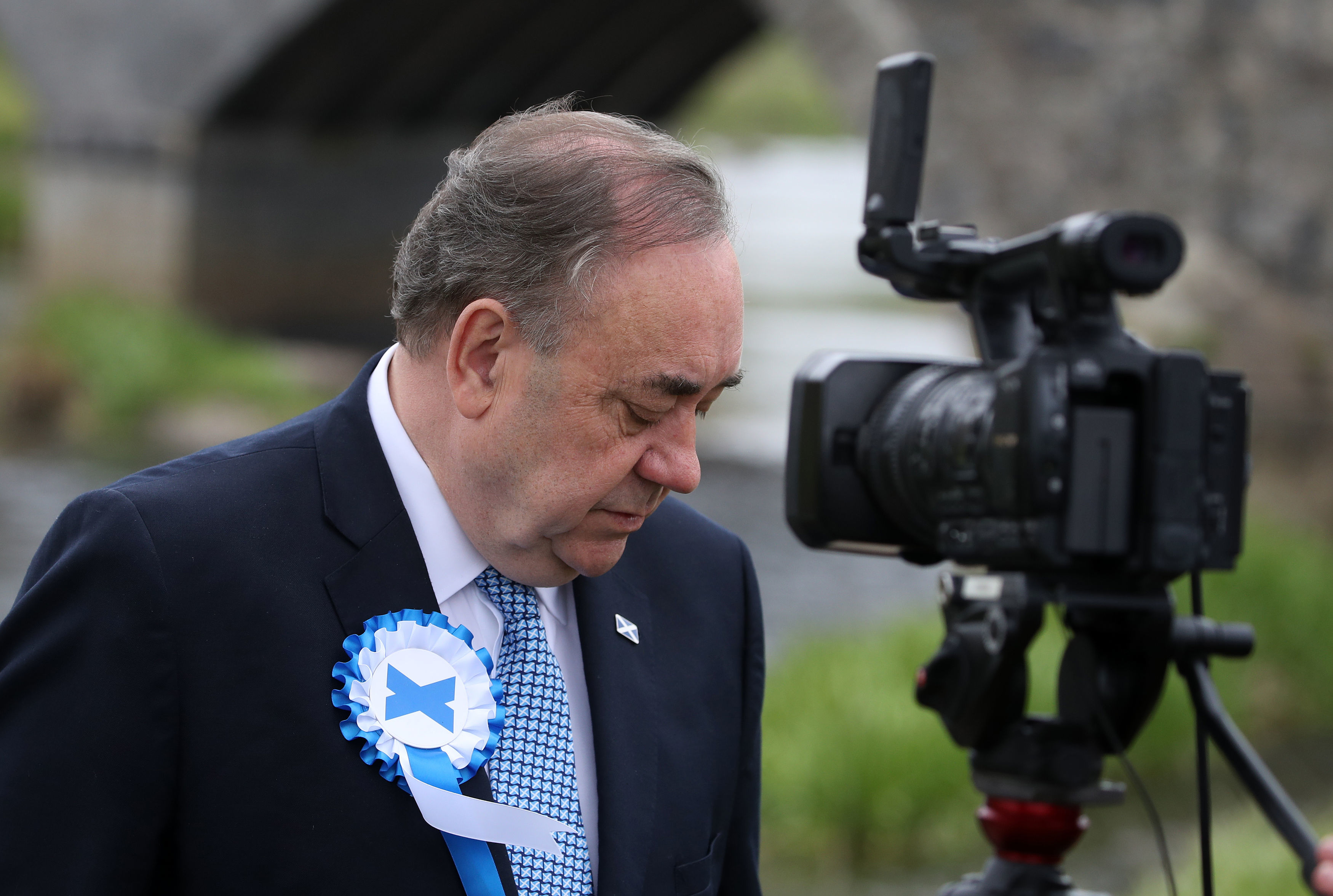 Alex Salmond is on course to win zero seats with his new Alba PartyCredit: PA

MARK DRAKEFORD: "I WILL BE RADICAL IN GOVERNMENT"

The party is one seat short of an overall majority in the Senedd and looks unlikely to win any of the four remaining seats.

He will now talk to other parties, including former coalition partner the Lib Dems, to form an administration.

Mr Drakeford, whose public profile has ballooned during the pandemic, said: "The government I lead will continue to follow the science to do what our medical advisers tells us we should do, and that does mean doing things in a way that continues to keep Wales safe.

"But on other matters, our manifesto is a radical manifesto with a host of ideas that are ambitious for Wales."