A MOTHER has revealed how she was forced to hand her own son in to the police after he joined a Nazi group.

Katherine’s son slept with a swastika next to his bed after being groomed online by a group of far-right terrorists. 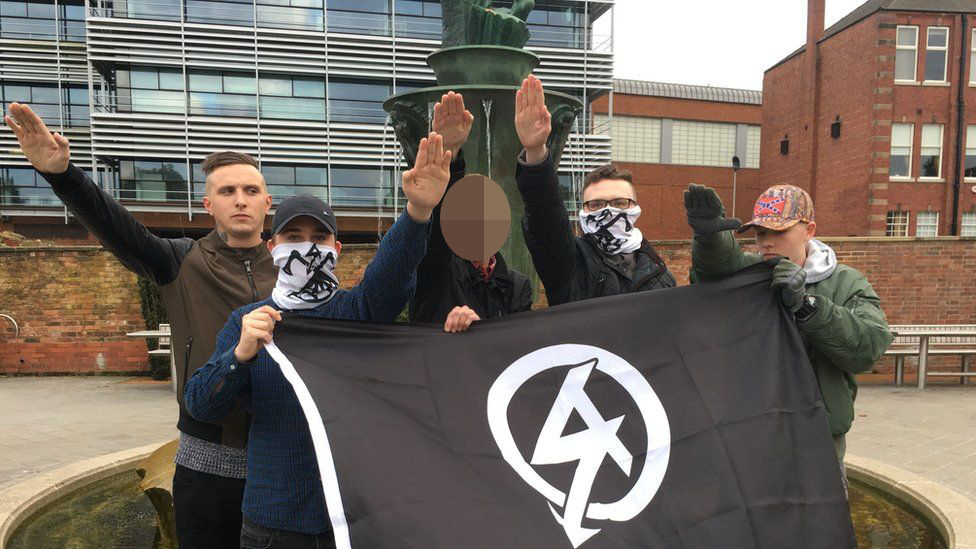 Now she is speaking out about how her son changed from an “ordinary lad” to a convicted far-right terrorist, as she warns other parents that her “ordeal could happen to anyone.”

Katherine says her son was a normal boy until at age 15 he was robbed at knifepoint in 2015 and became obsessed with  “patriotism and immigration”.

Katherine told The Mirror: “He couldn’t understand why the robber wasn’t arrested and began looking at websites talking about patriotism and immigration.

“He was listening to Nigel Farage but said UKIP weren’t achieving anything through official channels.

“I’ve always been left-leaning in my politics and I tried to discourage him.”

But by May 2016 her son revealed to his mother he had joined far-right neo-Nazi terrorist organisation National Action.

Katherine said: “I looked them up and was horrified. My son started telling me the Holocaust was a conspiracy.

“I tried to reason with him but he wouldn’t listen. By then he was ­entrenched in the ideology.”

Four months later she called the police, who involved the government’s Prevent scheme after she found a Nazi flag hanging in his bedroom.

In 2017 their home in West Yorkshire was raided and her son, then 17, was arrested for posting race-hate stickers.

He received a 12-month suspended sentence and promised his mother that he was done with extremism after realising he made “a mistake”.

WHO ARE NATIONAL ACTION?

National Action describes itself as a "National Socialist youth organisation" and says its movement is aimed at the "broken right-wing".

A statement on its website says: “We carry out demonstrations, publicity stunts, and other activities in order to grow and spread our message, that of National Socialism.”

The group also boasts of cultivating a “tough image” to dissuade opponents from physical confrontation, while contesting their label as violent extremists.

In December 2016, Home Secretary Amber Rudd added National Action to the list of banned organisations under the Terrorism Act 2000.

The ban means that being a member of the group or inviting support for it becomes a criminal offence.

Breaching the ban can lead to a maximum of ten years in prison and an unlimited fine.

But he was immediately arrested for being a member of National Action and was jailed for four-and-a-half years last June.

She explained: “My son was vulnerable when he got involved with the far- right. I want other parents to realise this could happen to their children too.

“My son’s first arrest knocked sense into him but it was too late.

My advice to anyone who suspects their child may be going down his route is to get help as early as possible.

He’s so remorseful and wants to get out and get on with his life. He knows what he did was wrong and feels National Action lied to him.”

It comes as Britain's youngest convicted terrorist who led a neo-Nazi cell from his gran's house last week avoided custody.

He spoke about "gassing" Jewish people, hanging homosexuals and wanting to "shoot up their parades" in chilling exchanges.

The warped teen, now 16, also ran the UK branch of the extremist Feuerkrieg Division (FKD) during the summer of 2019.