A MYSTERY banner declaring "Sally messed up and she's so sorry" has been puzzling neighbours after it appeared on a residential street.

The large sign, appearing to be from a remorseful woman named Sally or someone on her behalf, was put up in Beeches Road, Great Barr, Birmingham, earlier this week. 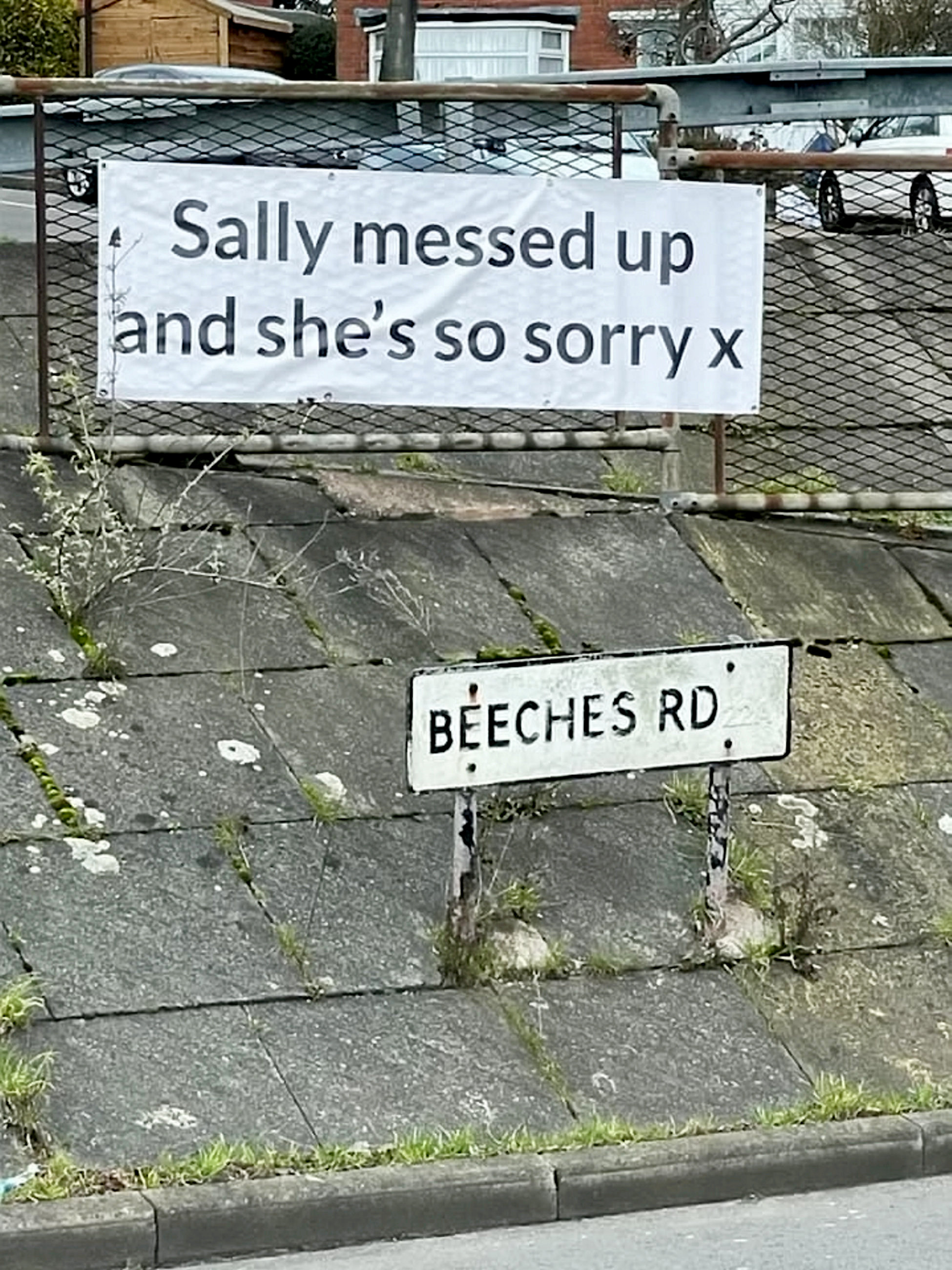 Residents have been left baffled after a mystery banner declaring 'Sally messed up' was displayed on a Birmingham streetCredit: SWNS:South West News Service

Locals have been left scratching their heads over the identity of Sally and what she might have done to feel the need to issue a grovelling public apology.

The sign, which was printed in large black letters and hung on railings along a dual carriageway, was later removed after being pictured on Tuesday.

But it had already been viewed by hundreds of baffled passing motorists keen to solve the mystery of the cryptic message and who Sally is.

Neighbour Brian Webster, 45, a dad-of-two, said: "I didn't see who put it up and whether it was a woman or not.

"This is quite a close knit community but I don't know of a woman called Sally who lives nearby.

"But whatever she's done, she's obviously very sorry for. It takes some guts to display an apology like that so publicly.

"Whoever it's directed at, I just hope they forgave her. But obviously everyone wants to know the story behind it."

'IT'S A COMPLETE MYSTERY'

Another local resident Jessica Jackson, 29, added: "I want to know what she's done, everyone has been talking about it but nobody knows who she is.

"So it's a complete mystery to everyone around here. It's quite a busy road so maybe she has put it up on her boyfriend or husband's route to work.

"That's just assuming it's a man who she is apologising to, it could be a friend, a work colleague or anything.

"But it's certainly intriguing and has captured the imagination of people around here. I think Sally has cheated on her partner, but that's just my opinion.

"There hasn't been much else to do during the pandemic so a local mystery like this has been a nice change. We just want to get to the bottom of it now."

Great Barr resident John Couzens, 30, added: "It could have been somebody apologising for Sally otherwise she's speaking about herself in the third person.

"It's rather strange either way and I'm sure the person who it was directed at got the message and that's the most important thing."

One passing resident snapped a photo of the banner before sharing it with the website Birmz Is Grime where it has been shared and viewed hundreds of times.

Tim Burchill wrote on Facebook: "Am I the only person who can't stop thinking about Sally and what she might have done? I need to know!"

David Quinton added: "Sally must have messed up pretty bad to go to these lengths. I wonder if he forgave her."

Making reference to the Oasis hit Don't Look Back In Anger, Les Loveland joked: "So Sally can wait she knows it's too late."

Tom Bishop said: "Oh dear Sally what have you done? Seriously, she needs to reveal herself and tell us because we all need to know now! Don't keep us in suspense."