A WILDFIRE in Southern California nearly quadrupled in size on Monday, forcing tens of thousands of residents to evacuate their homes.

Two firefighters also suffered critical injuries in the blaze, which may have been started by a power company's equipment. 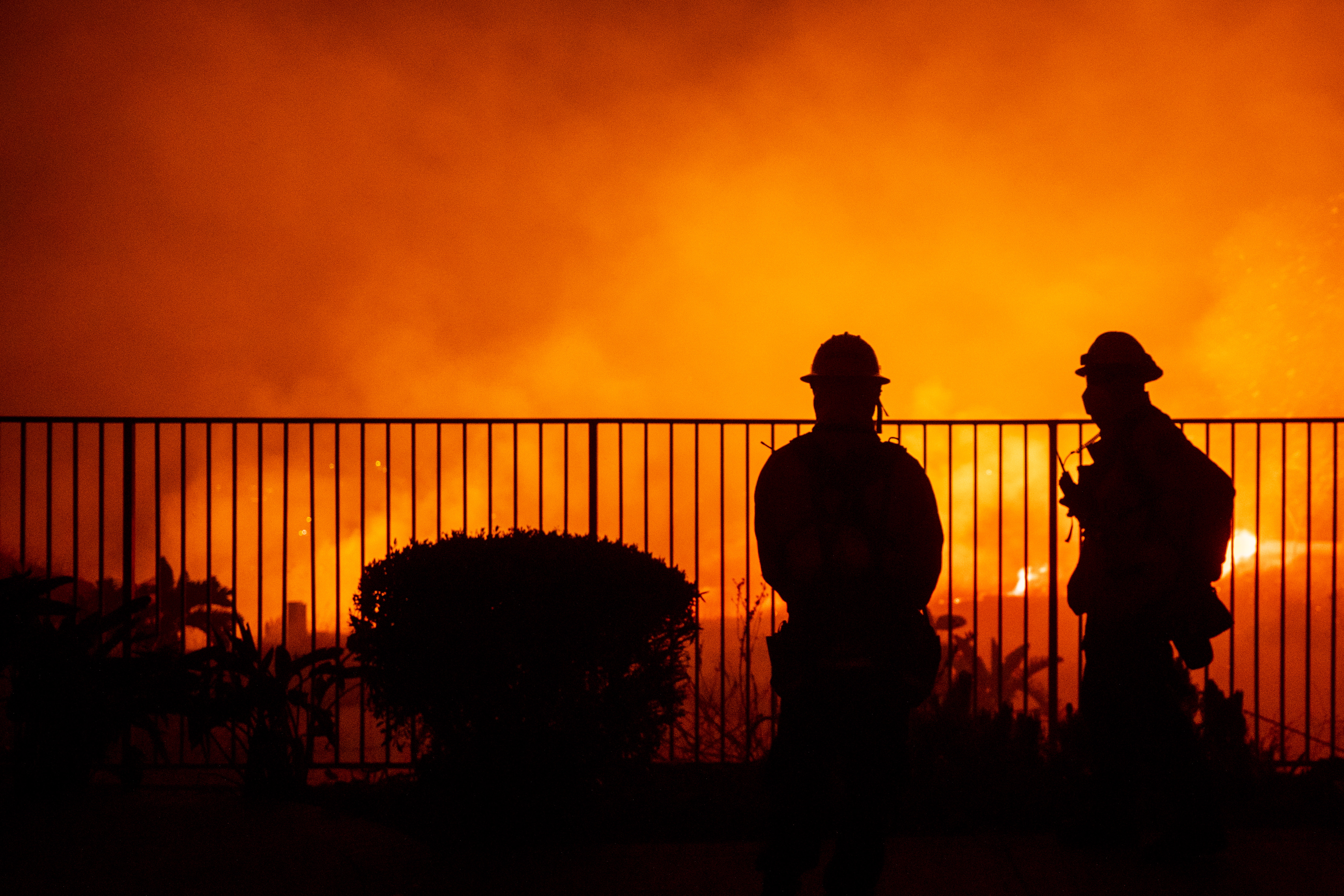 A wildfire in California nearly quadrupled in size on MondayCredit: EPA 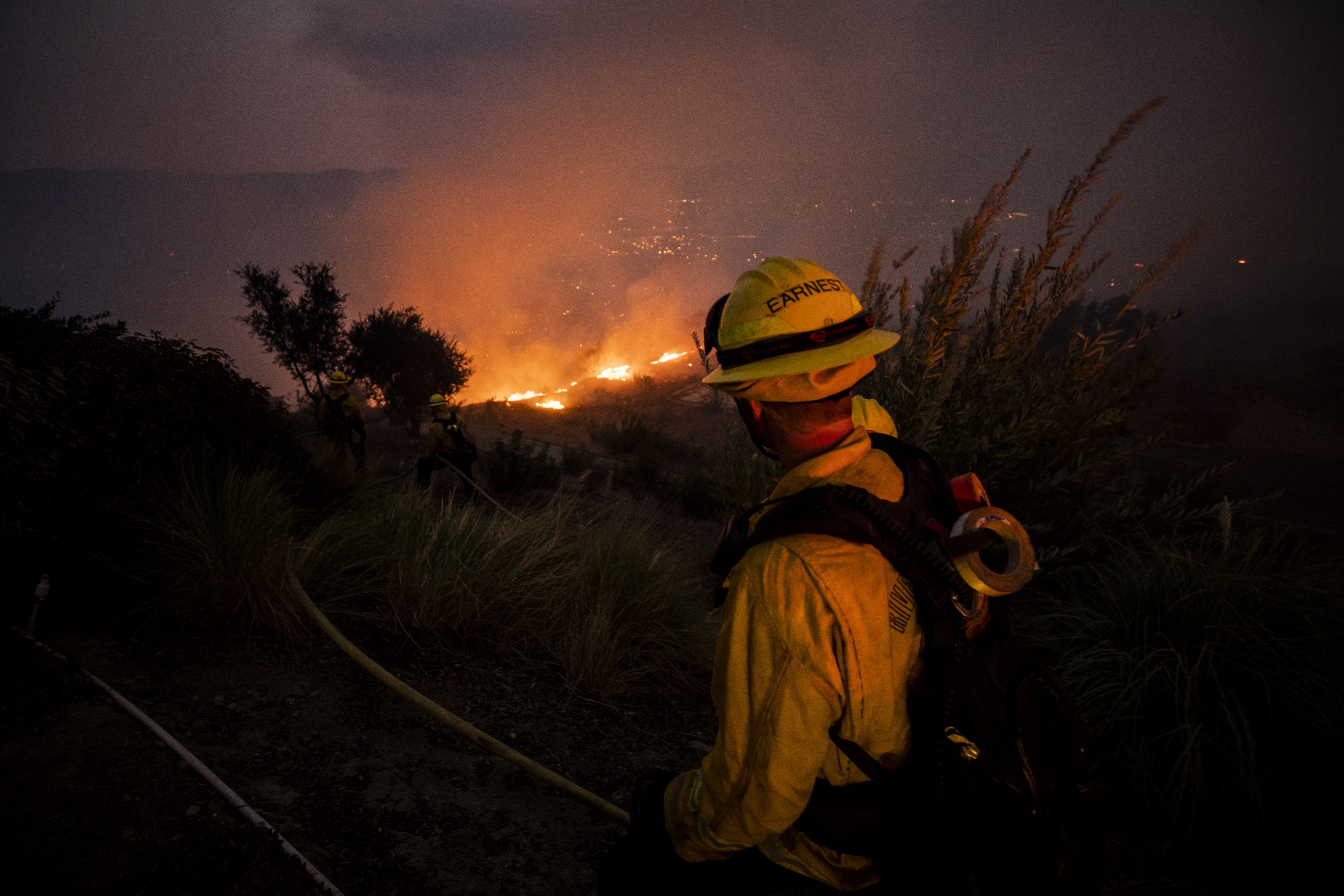 The Silverado Fire is believed to have been started by power equipmentCredit: EPA

A report filed with California Public Utilities Commission shows a Southern California Edison power line may have played a part in the fire.

So far, the Silverado Fire has burned through more than 7,200 acres near Irvine.

A Southern California Edison spokesman, Chris Abel, told CNN: "We reported the incident despite seeing no activity on the nearby 12-kV circuit nor any downed power lines because it appears that a lashing wire attached to a telecommunications line may have contacted SCE's power line above it, possibly starting the fire."

The blaze, combined with a new, 3,000-acre Blue Ridge Fire, has meant more than 100,000 people have had to evacuate their homes, officials said.

According to PowerOutage.US., nearly 320,000 customers are without power as a result of the blazes, which are being battled by more than 700 fire officials.

Fennessy said that when he visited the emergency room, both firefighters were intubated and unable to speak.

The names of the firefighters were not provided, but they are said to be 26 and 31 years old.

One of the questions being raised by those being forced to evacuate is where to head during a time of coronavirus. 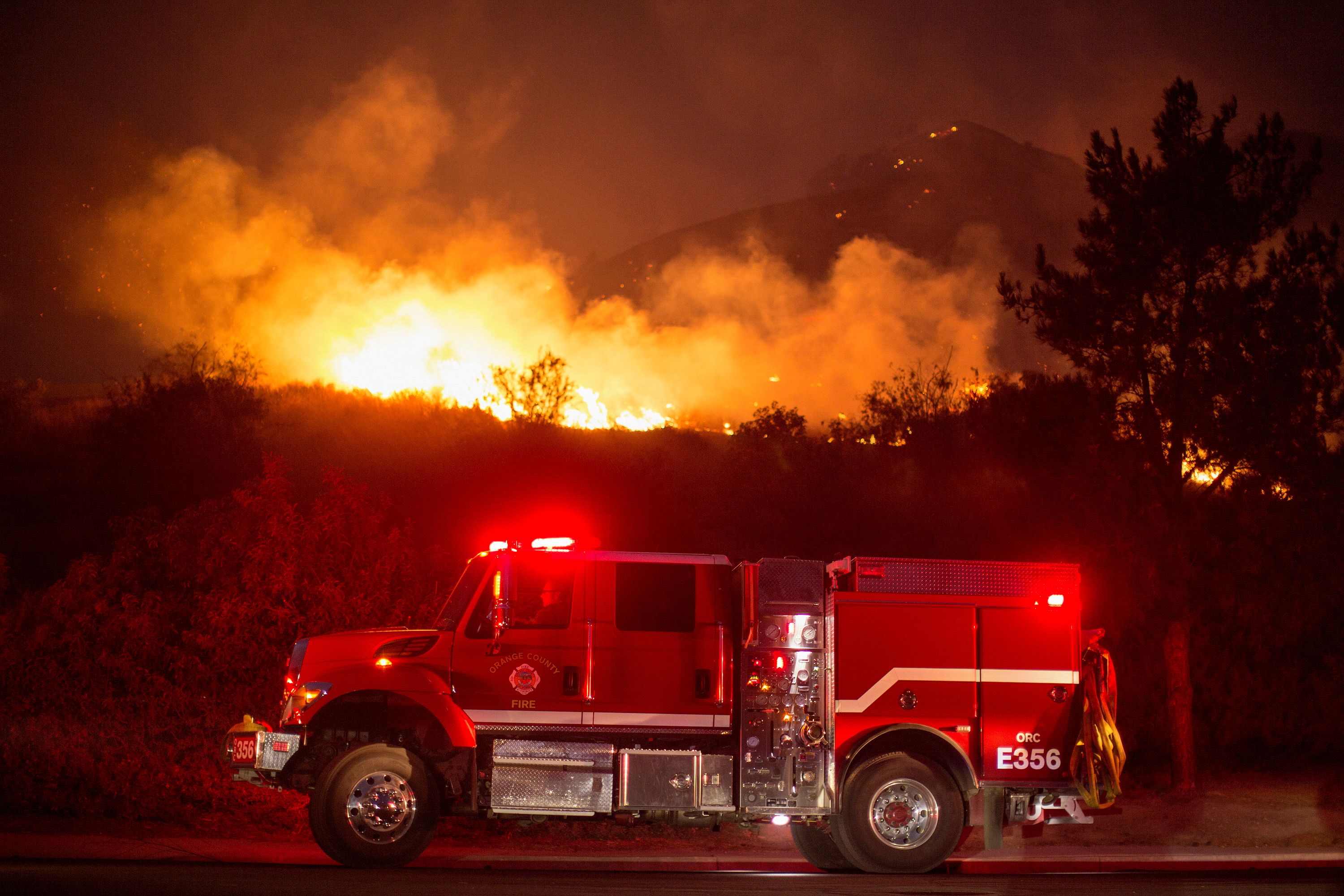 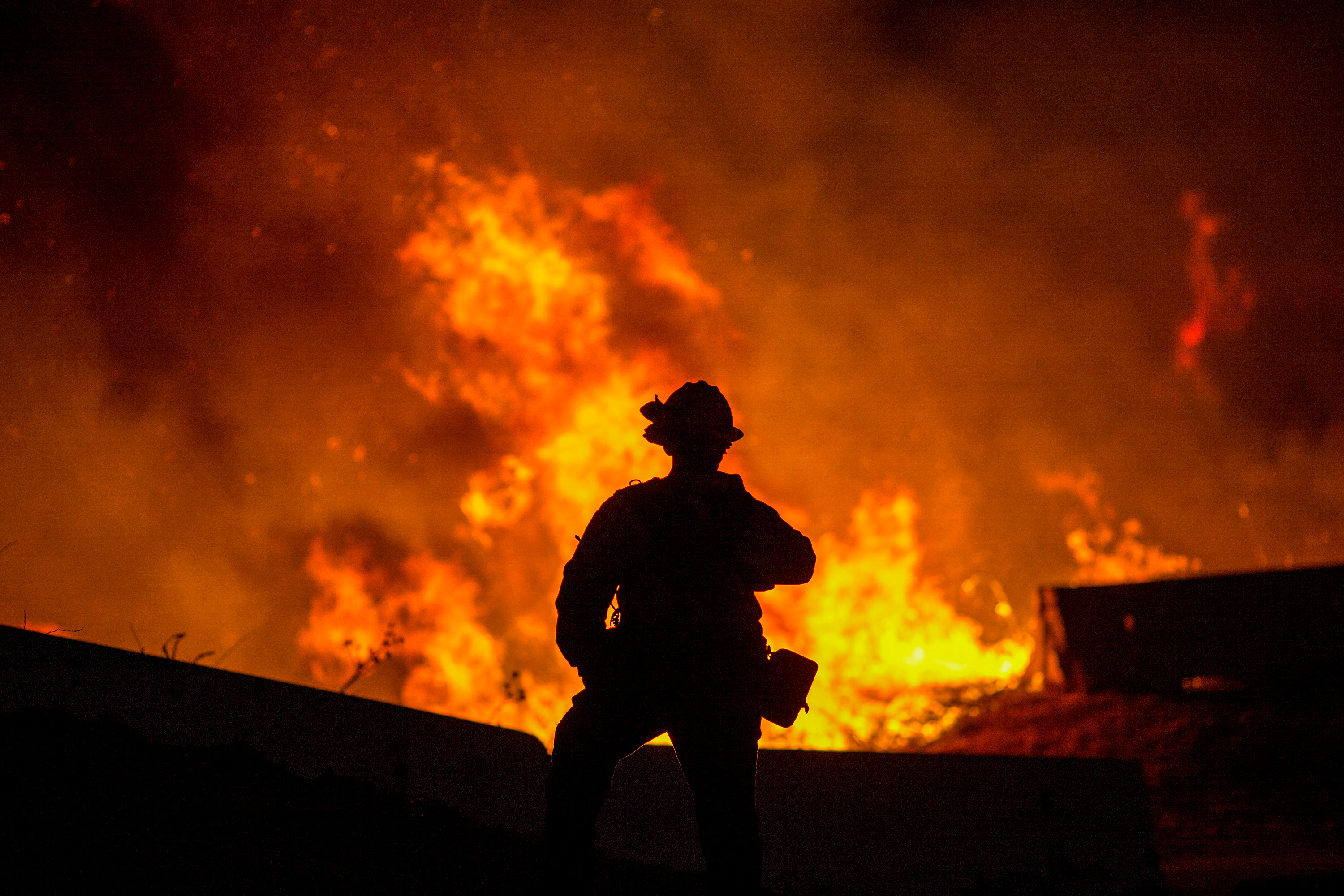 The blaze, combined with a new fire in Blue Ridge, has left hundreds of thousands without powerCredit: Copyright @ Ringo Chiu. All Rights Reserved. 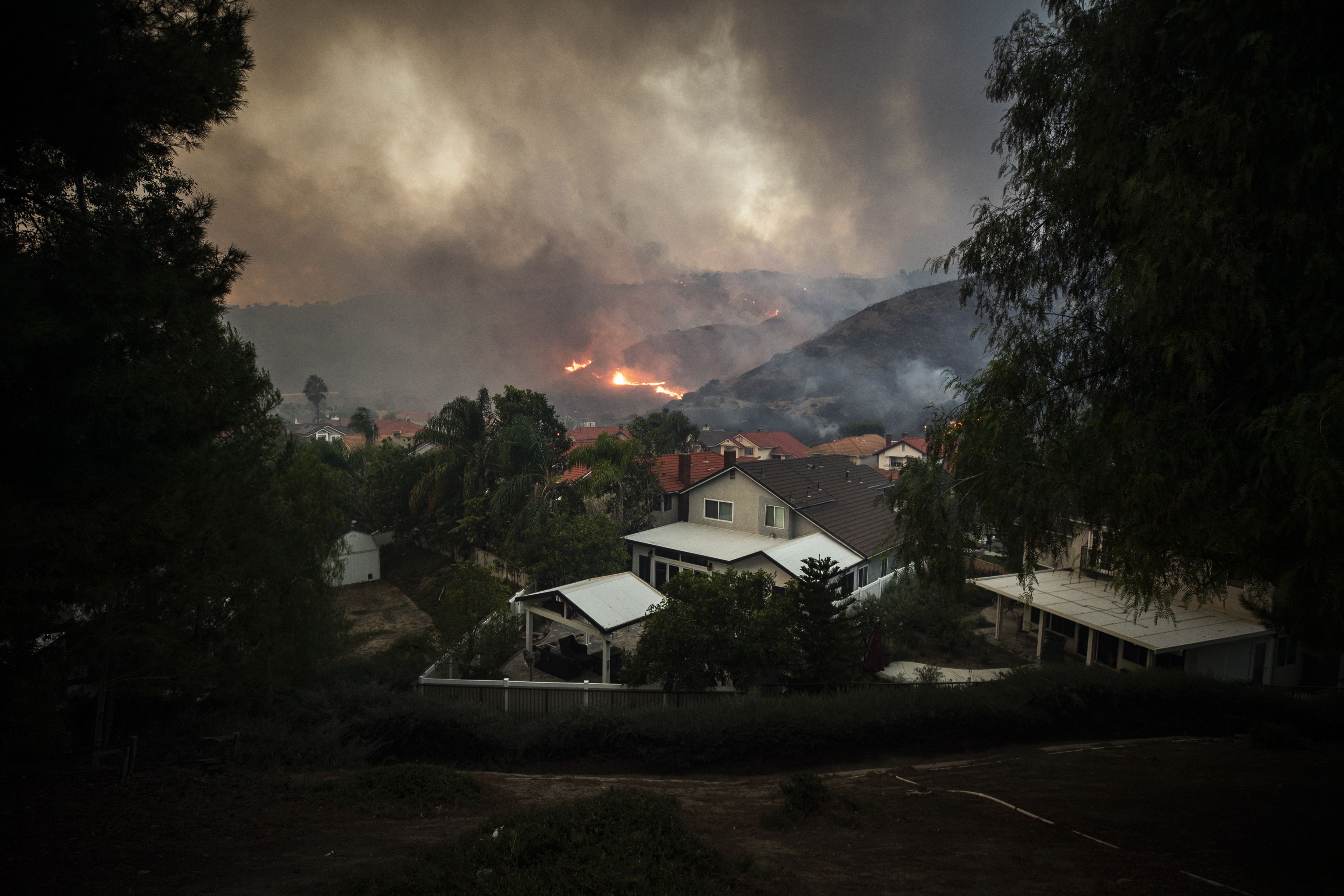 Scientists believe California's much drier climate, caused by climate change, is playing a part in the number of fires recently seen across the stateCredit: EPA

At the Irvine-area fire, Kelsey Brewer and her three roommates, speaking to the Associated Press, decided to leave their townhouse before the evacuation order came in.

They head to the home of her girlfriend's mother, who has ample space and lives alone.

Brewer said, "We literally talked about it this morning," adding that she feels lucky to have a safe place to go.

"We can only imagine how screwed everyone else feels," she added. "There's nowhere you can go to feel safe."

A second round of gusts is predicted to sweep through the same areas Monday night.

According to scientists, climate change has made California much drier, causing trees and other plants becoming more flammable.

October and November are traditionally the worst months for fires, but already this year there have been 8,600 wildfires in the state.

These blazes have scorched a record 6,400 square miles and destroyed about 9,200 homes, businesses and other buildings.

These fires have resulted in 31 deaths.

Electricity shutdowns by Pacific Gas & Electric mark the fifth time this year that the provider has had to cut power to reduce risk. 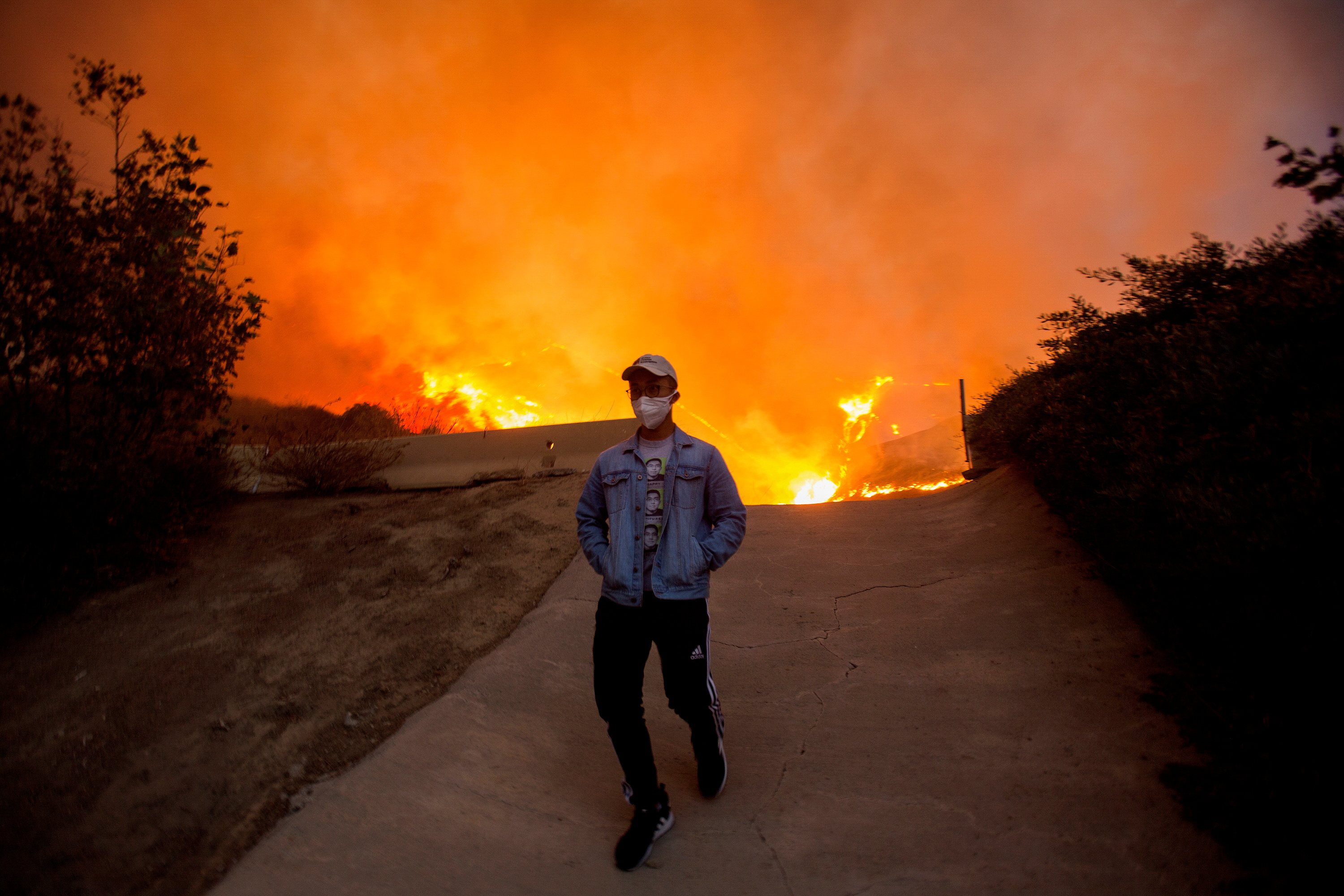 Due to the coronavirus pandemic, some residents have been left wondering where to headCredit: Copyright @ Ringo Chiu. All Rights Reserved. 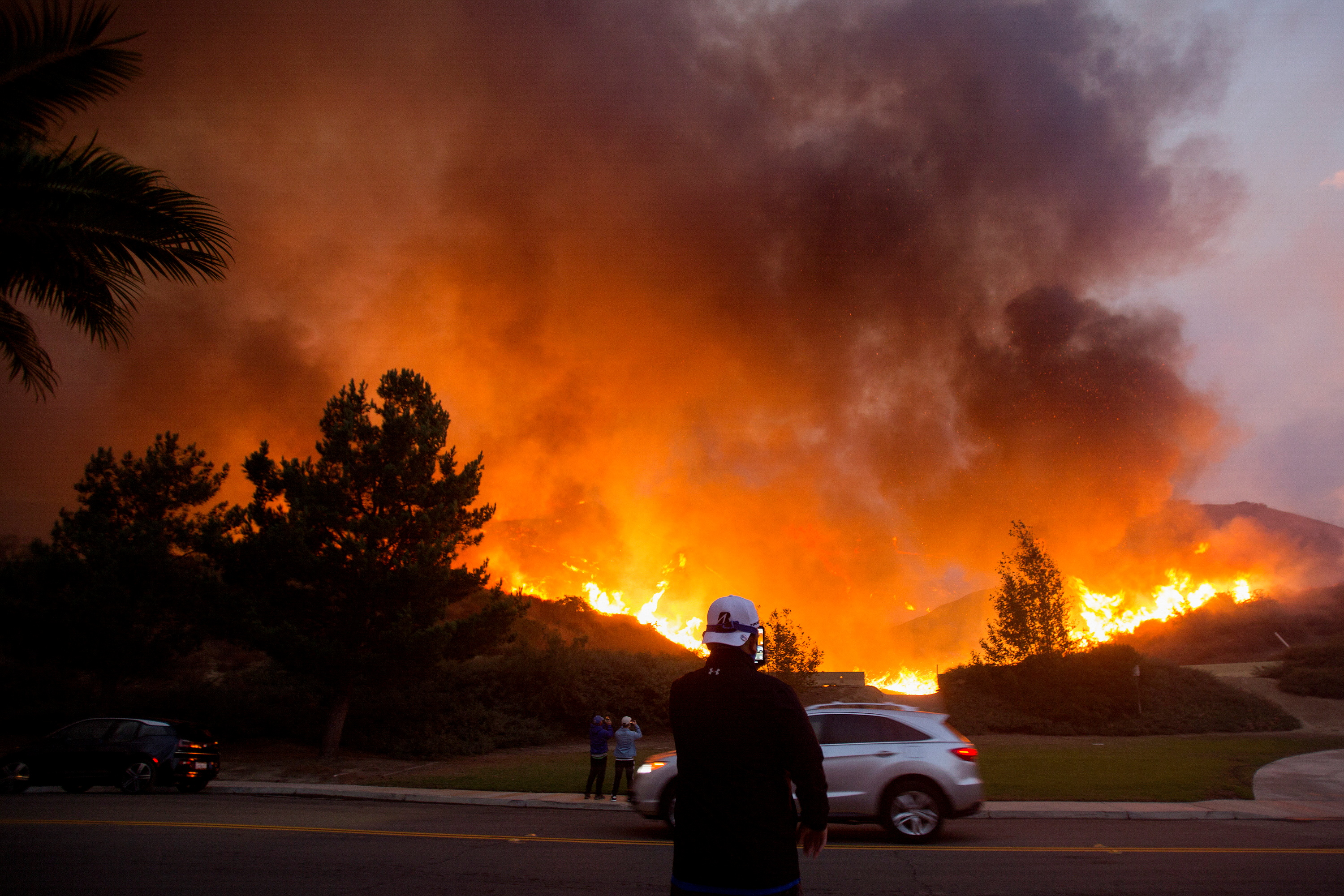 Fires in California have resulted in 31 deaths this yearCredit: Copyright @ Ringo Chiu. All Rights Reserved. 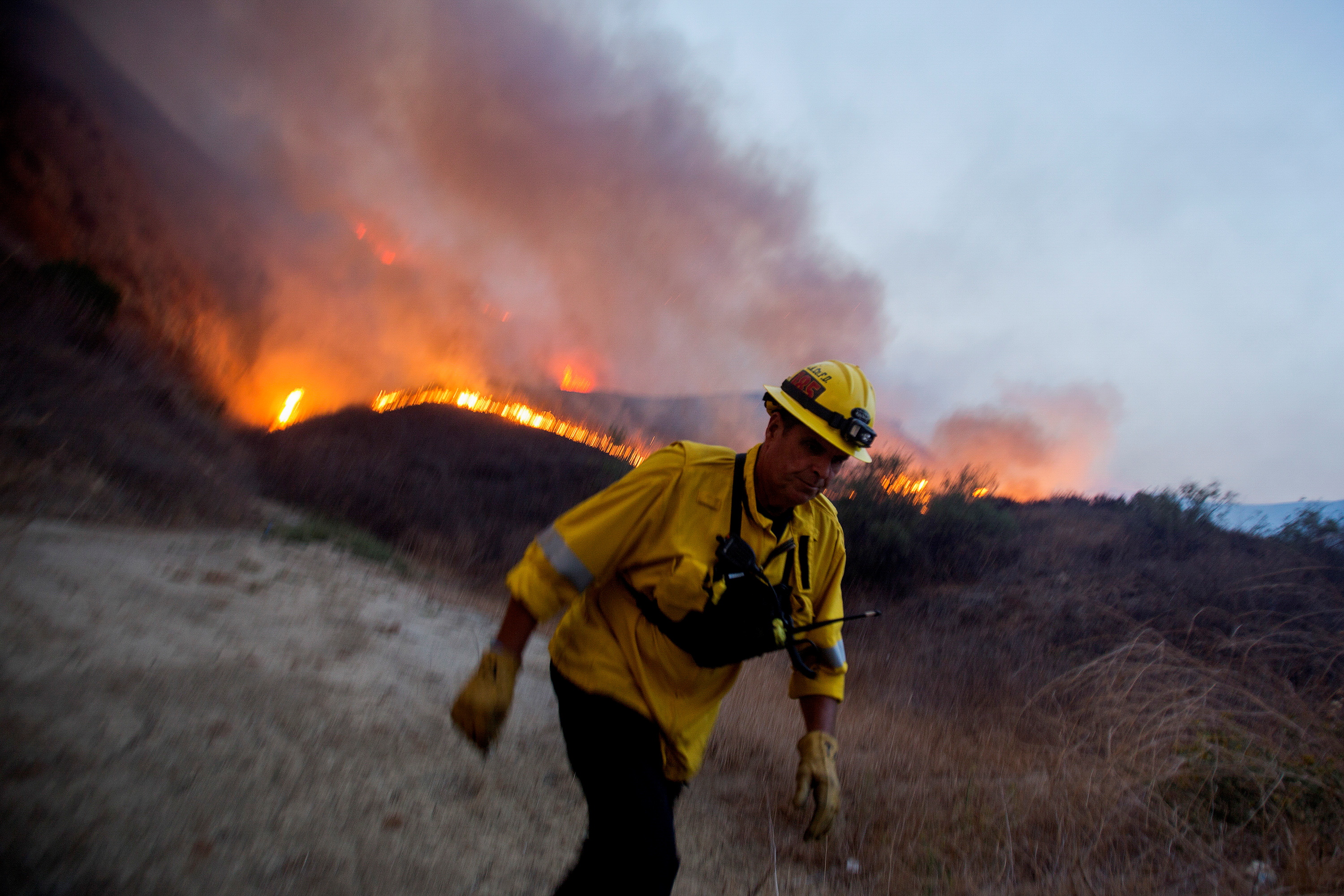 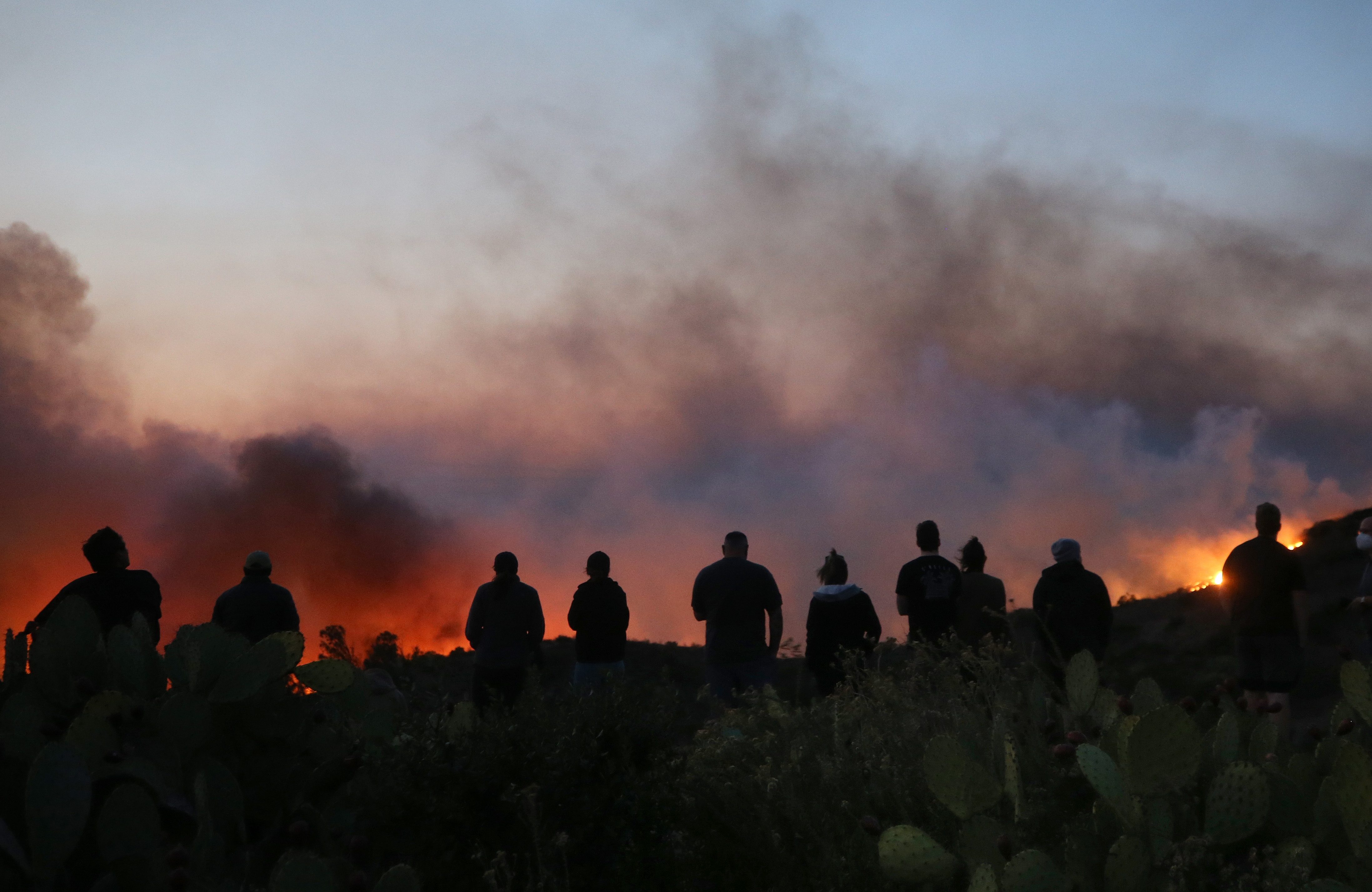 Power companies have been working to restore power to residentsCredit: Getty Images - Getty 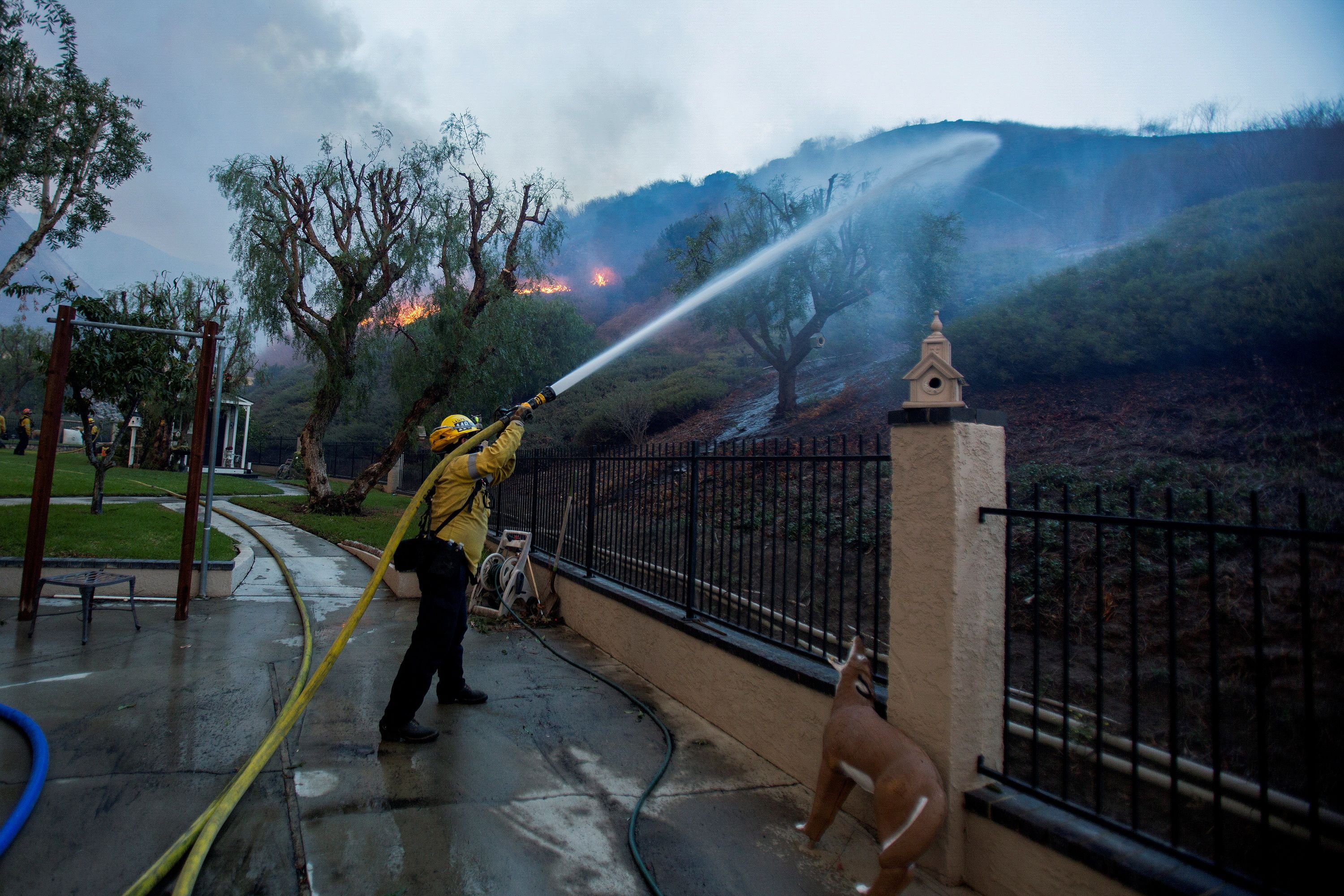 Gusts of wind were likely to impact the fires on Monday evening, officials saidCredit: Copyright @ Ringo Chiu. All Rights Reserved. 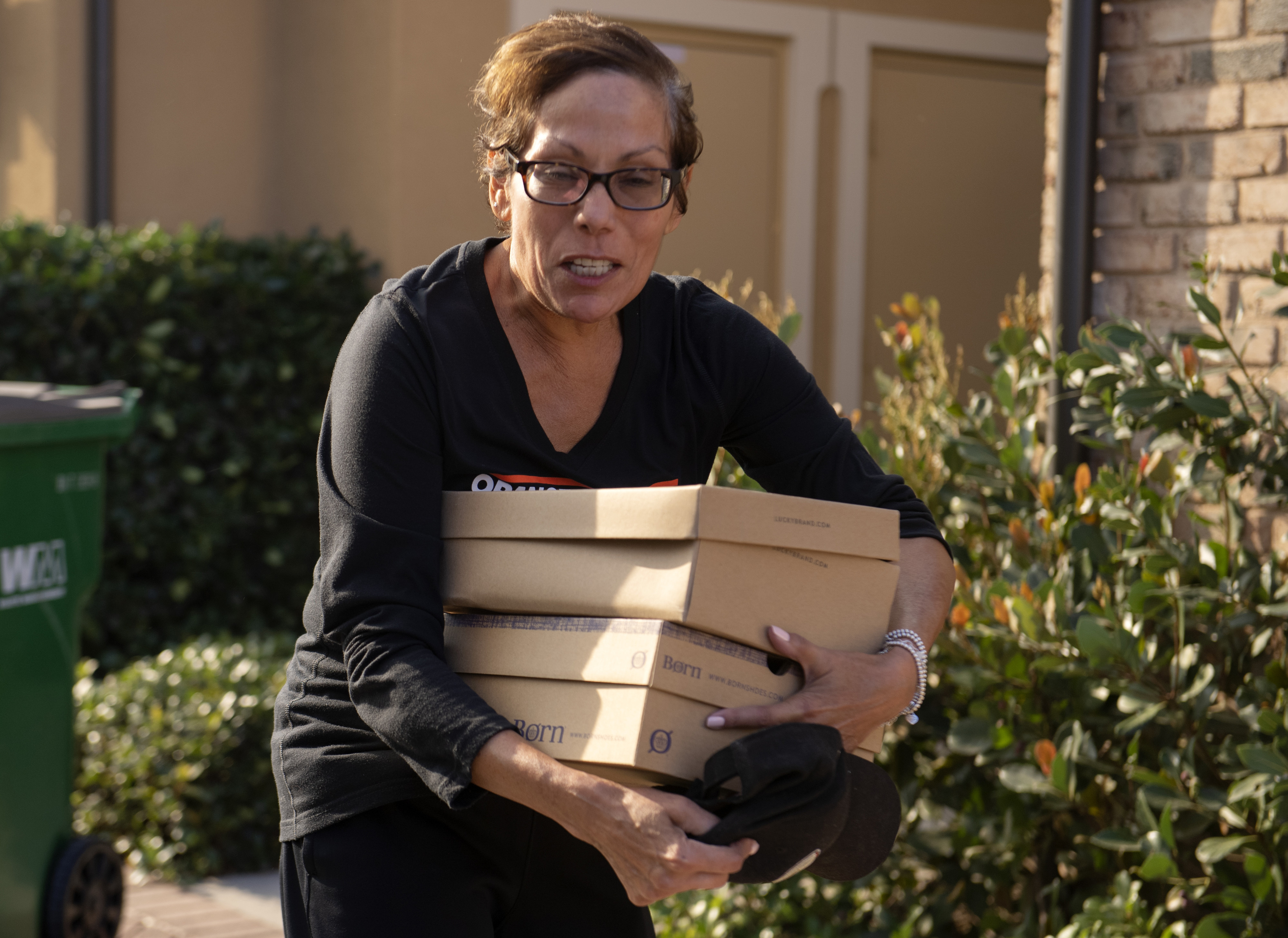