NO one likes to think about where their fast food meal came from – but it's definitely worth checking before taking a bite.

Take this McDonald's, for instance, which was found selling food over a month past its best-before dates. 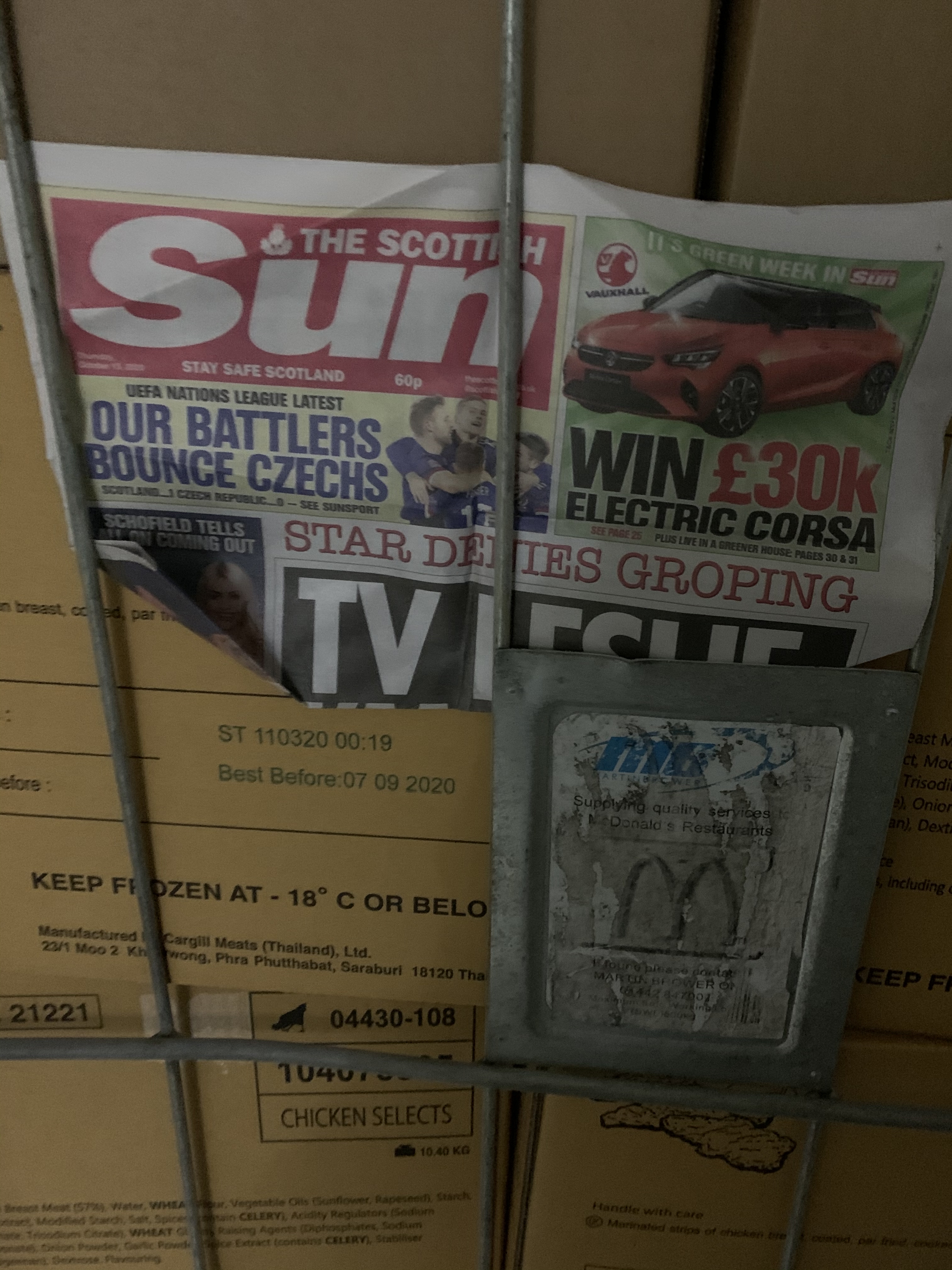 The fast food giant said the ageing burgers were fine as they were well within the required "use by" dates.

“While preparing to reopen restaurants earlier this year, we extended best-before dates on a small selection of frozen products to reduce waste," a spokesperson told The Sun.

“These will all be used comfortably within their use by date."

But McDonald's and other popular fast food chains have served up some truly horrific horror stories over the years.

Here are some of the worst of them – from ice cream machine sludge to mouldy meals.

Some of the grimmest things found in fast food restaurants came from the kitchen – but even worse things have been found in the toilets.

One horrified customer at a Burger King was shocked to find half-used needles and other drug paraphernalia discarded on the floor of the loos. 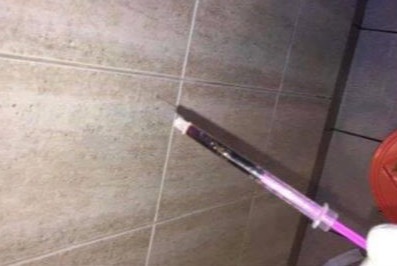 This dirty needle was found on the toilet floor in a Burger King in BelfastCredit: Mirrorpix

The grim find was made in a restaurant in Belfast, where the bins were overflowing too and a brown, sticky residue was on the tiled floor.

Mirrors were also said to have been smashed and toilet paper dispensers were reportedly ripped from the walls.

And rubber gloves were found among the seedy mess scattered on the floor.

"A child could have come in, went to the toilet, took that needle and put it in its mouth, who knows," Tommy Kelly told the BBC after finding a syringe in a Burger King toilet in 2014. 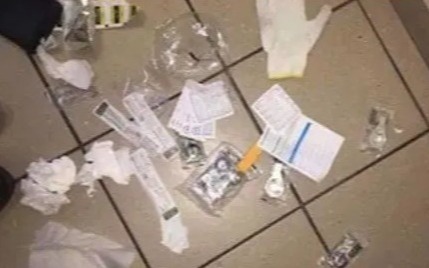 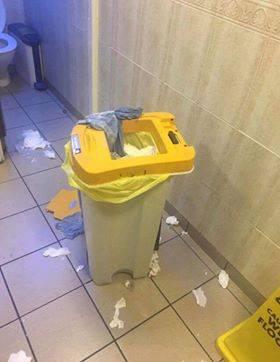 A shocked customer snapped pictures of the insanitary scene

Throwing up from mouldy burgers

But Burger King's true horrors have come from the kitchen – as Raphael Friedrich found out.

The Swiss native ordered a Big King burger at his local franchise in Biel, but he got a big surprise instead when he took his first bite. 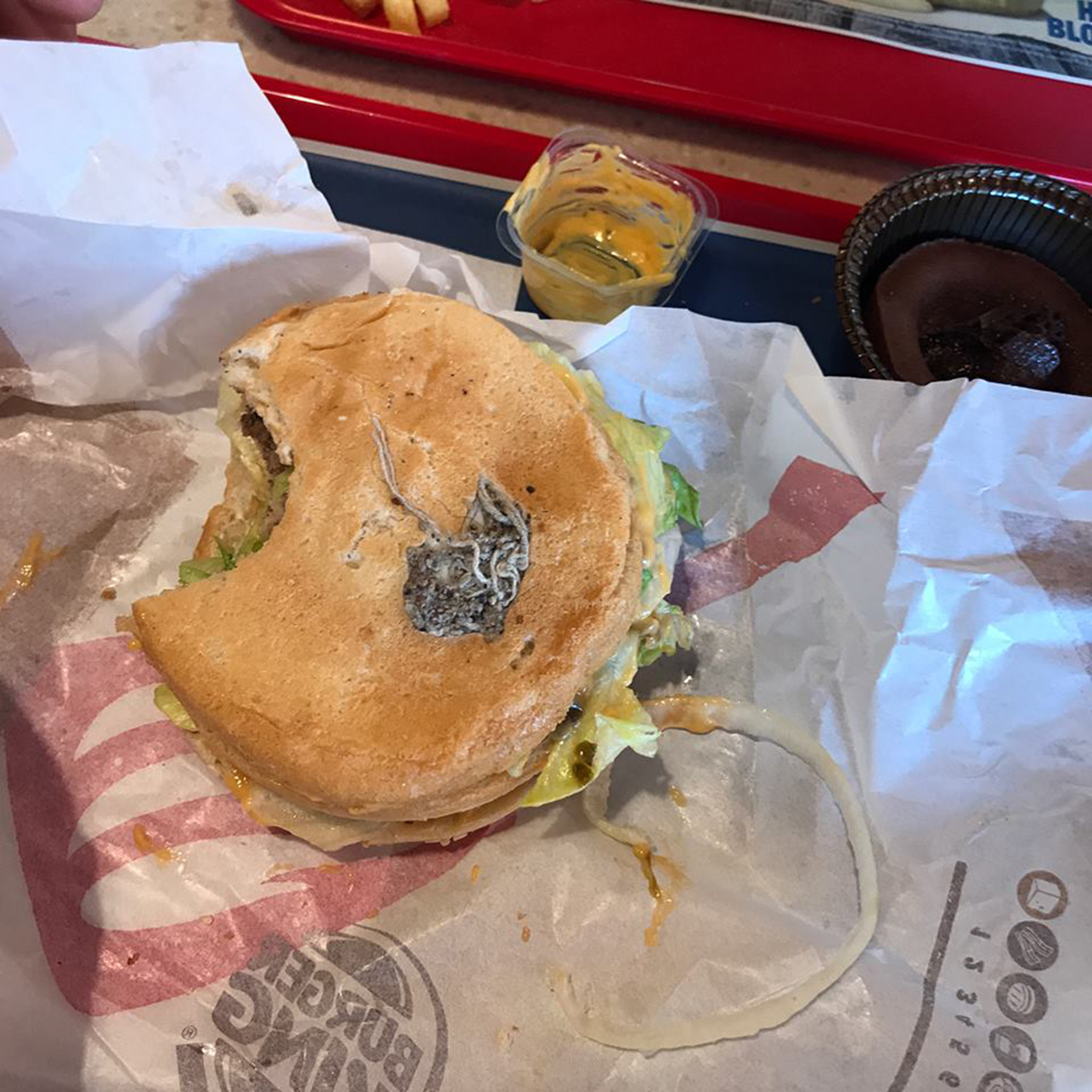 This was the horrific grime on Friedrich's burger that made him throw upCredit: Central European News

"It looked as if filthy cords, hair, and dirty cardboard had been baked in the bread roll," Friedrich said.

"I was vomiting, my stomach turned around."

He even ended going to hospital with "stomach cramps", according to local media, but he was fine.

Burger King said it would launch an investigation into the horror-show hamburger.

And pharmacist Cassandra Harris got a similarly appalling shock when she tucked into her £6 KFC Zinger Tower meal in Wellingborough, Northants.

Inside, she found uncooked giblets has been left inside the chicken. 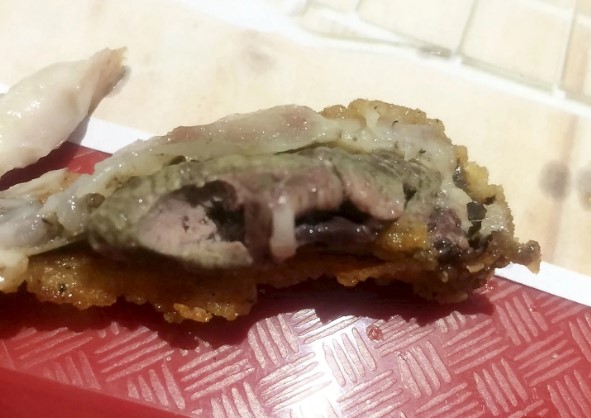 This was the sickening site of uncooked giblets Cassandra found in her KFC dinnerCredit: SWNS

“It looked disgusting and pink, I didn’t want to touch it," Cassandra said.

“I first thought that it may have been brain or lung, it certainly wasn’t
chicken."

KFC apologised to her and said it would remind staff "to take extra care in future".

Wet socks stuffed in the oven

But sometimes fast food horrors happen because the staff are doing something gross that goes way beyond carelessness.

One Subway worker sparked outrage when she posted a picture of her wet socks and gloves drying in the bread oven to her Instagram page. 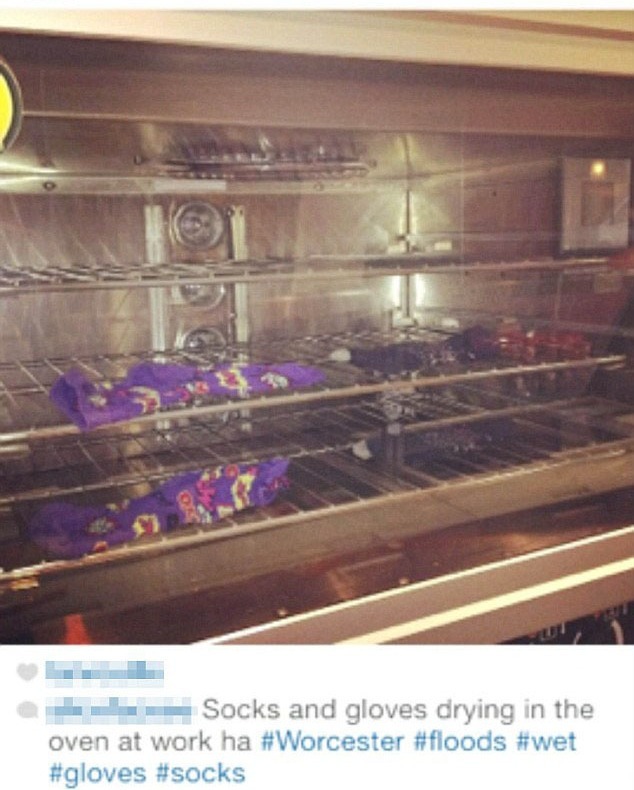 This was Alice's grim post showing her soggy socks drying off in the Subway bread ovenCredit: Newsteam

"Socks and gloves drying in the oven at work ha," Alice Sykes captioned her grim picture taken in the sandwich shop in the St John’s area of Worcester.

A customer spotted the gross post and complained – Subway said it would investigate the incident, MailOnline reports.

And three years ago, staff at the Central Park Subway in Rugby, Warks., were secretly filmed pulling bread out of a bin to serve to customers.

But earlier this year another customer was left gagging on their sandwich when they saw a Subway worker pulling his pants down and scratching his bum behind the counter.

The unsavoury display took place in the branch in Accrington, Lancs. 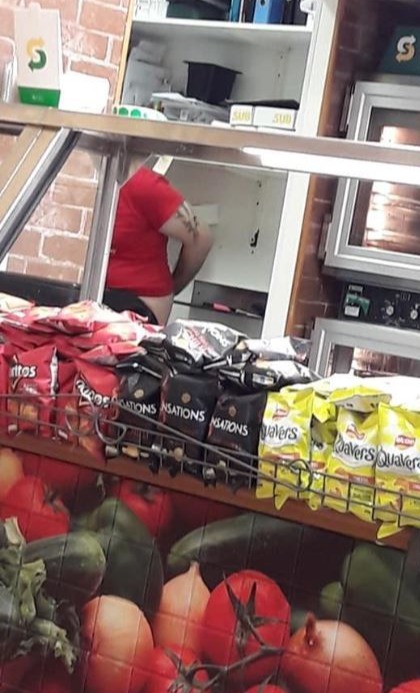 This bleak site greeted diners at a Subway in Lancashire earlier this yearCredit: Lancashire Telegraph

"It is absolutely disgusting and I won’t be going into that Subway again," a fuming witness told the Lancashire Telegraph.

"I said to my partner: 'Have you seen that? You have just eaten and he is doing that.'"

A company spokesperson said: "We have contacted the relevant franchise owner who is addressing this further with his staff."

Sometimes even when the food is fine, customers have been left traumatised by filthy dining areas and kitchens.

McFlurry fans might never recover after a McDonald's employee posted horrific snaps of a mouldy tray he claims came from inside the ice cream machine. 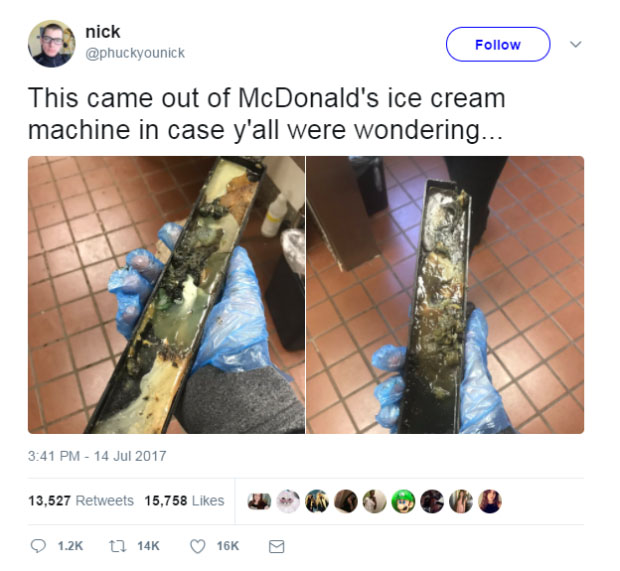 He also posted pictures of piles of rotting grease caked on the tile floor – all of which led to an unsurprising outcome.

"Lmao I just got fired," he tweeted after posting the gruesome gallery. "Lmao I wanted to go out with a bang.

"I got fired from McDonald's. I strategically planned this because I start working at my new job Friday." 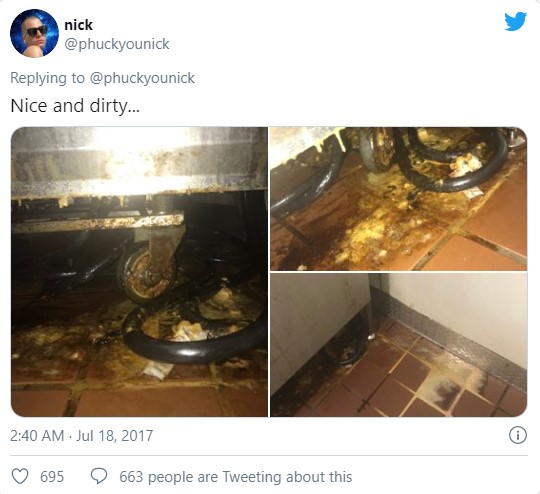 He also showed graphic pictures of grease and fat built up on the floorCredit: Twitter/@phuckyounick

While grimy kitchens might turn customers away, they can draw in an unwanted type of visitor: rats.

KFC workers in Reading were filmed chasing around a large rodent as it darted between tables in 2017.

The bleak ordeal came to an even bleaker end when the rat was stamped to death by an employee.

"It was so shocking. The staff did not have the situation under control at all," witness Abdul Khan said at the time.

"There were two staff members trying to kick the rat and then in the end one ended up stamping on it in a KFC bag. 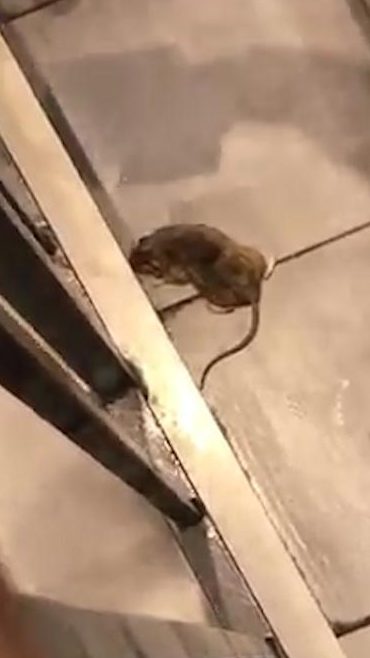 This monster rat was filmed scurrying between tables in a KFC 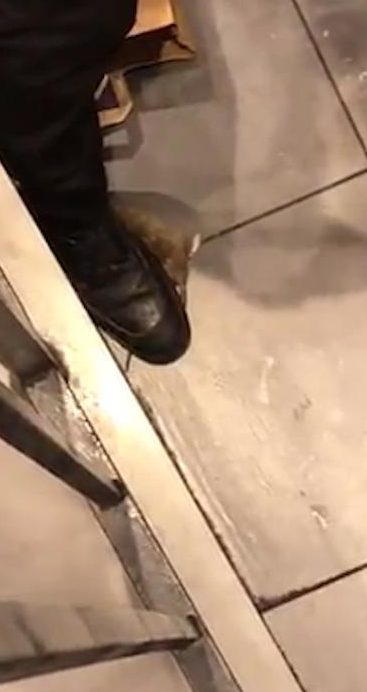 My son, 15, was groomed by drug gangs - Covid could lead to more 'lost' kids

A KFC spokesperson said the restaurant was immediately closed and an investigation found there was a rat problem in the surrounding area.

"We were shocked to see this and would like to apologise to any customers that were in the restaurant at the time," the spokesperson added.

McDonald's workers reveal secrets of fast food chain, including how eggs are cooked and how unhappy customers get free food