A RUSSIAN influencer has apologised after posing naked on top of an endangered elephant in Bali for Instagram likes.

Alesya Kafelnikova, 22, who is the daughter of Russian tennis great Yevgeny Kafelnikov, shared the video last week with her 541,000 followers with the caption "natural vibes”. 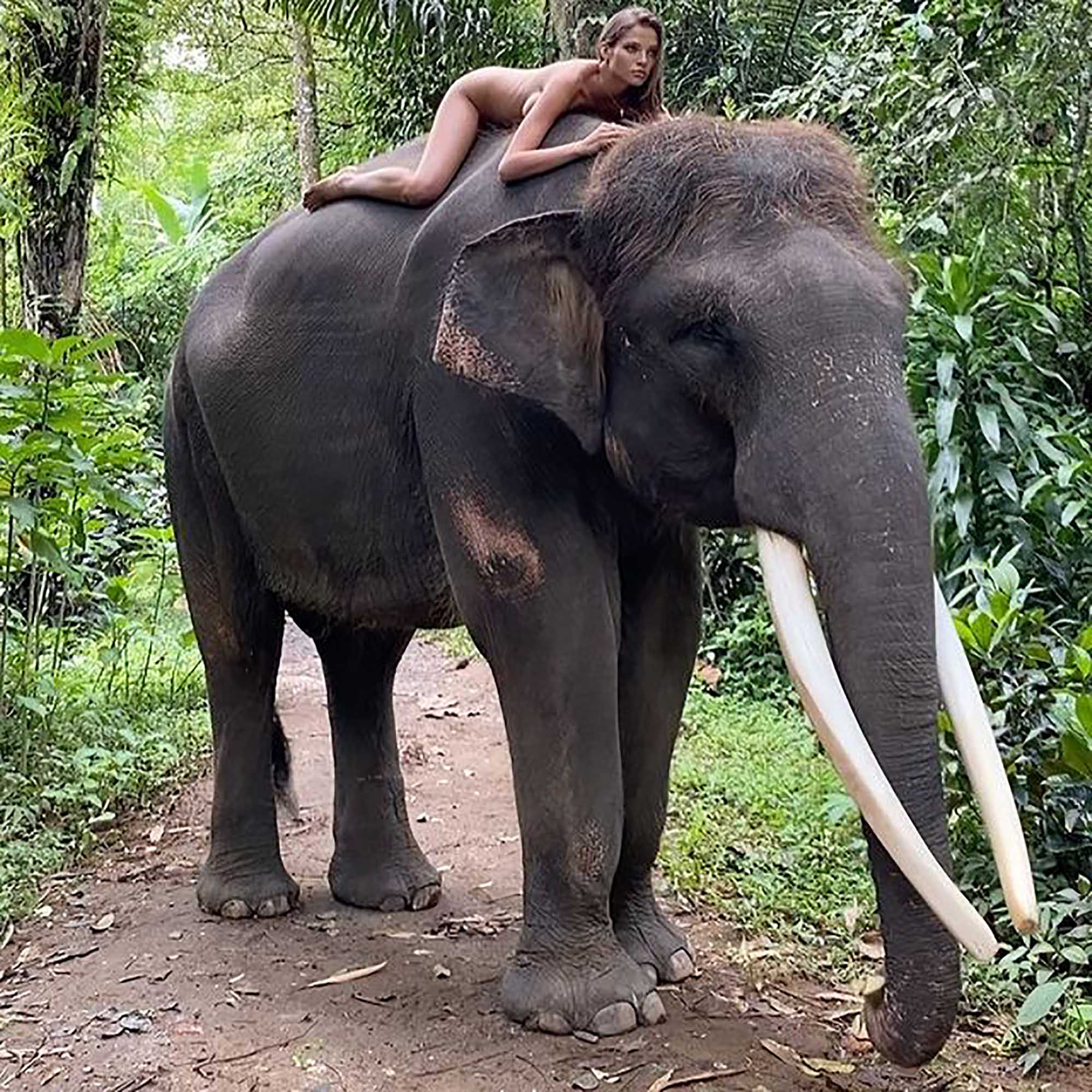 The video showed the 22-year-old lying on the endangered Sumatran elephantCredit: @kafelnikova_a; Instagram 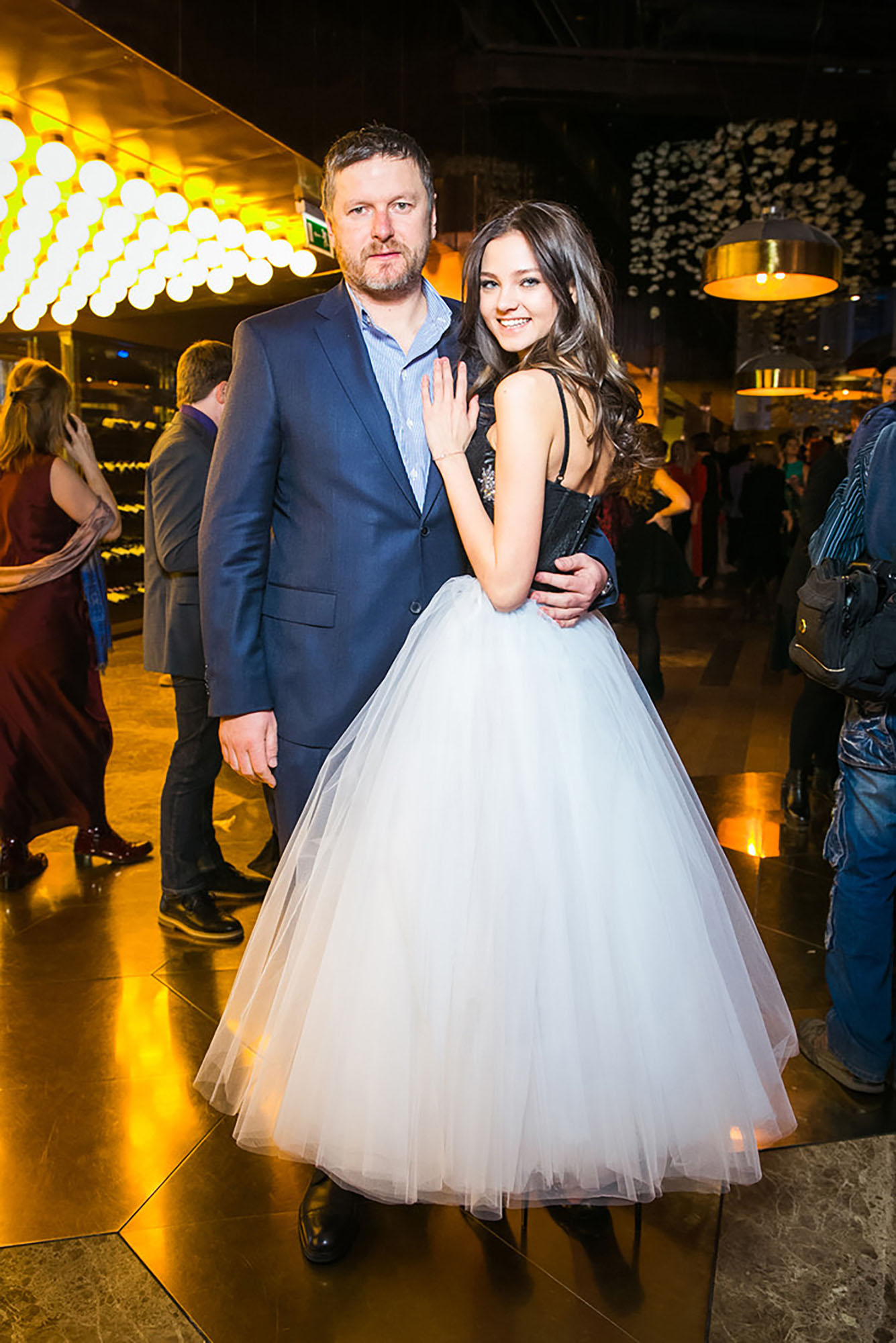 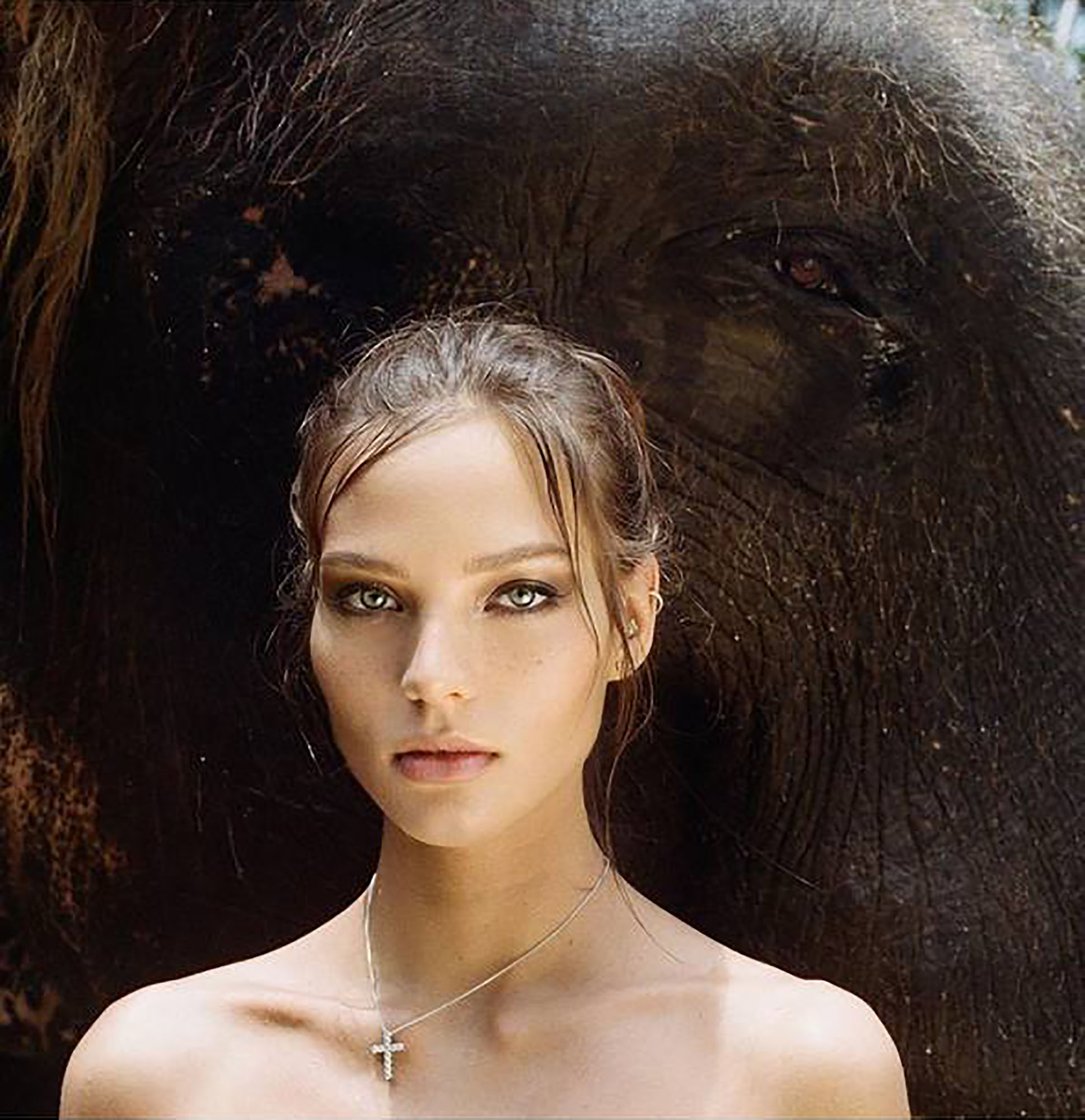 In another ironic post, Kafelnikova posted a picture with the elephant telling her followers that "to love nature is human nature".

While some followers posted comments such as "for the first time ever, I want to be an elephant" others focused on the animal's welfare.

One Instagram-user said: "Poor elephant. Aren't you ashamed to lie naked on an elephant? This is a living creature. Money overshadows everything."

Another condemned the photoshoot a "violation" against the animal.

But while Kafelnikova said she was sorry for causing offence, she also claimed her critics mistakenly saw “vulgarity” in “wonderful beauty”.

In a new post, the Russian tried to justify the nude escapade to her 541,000 followers and said she had made a donation to animals and locals in the Balinese village where she did the shoot.

She said: “It is a pity that people see this as vulgarity, and not as beauty and love for nature.

“I love animals, I love elephants.

It is a pity that people see this as vulgarity, and not as beauty and love for nature

Kafelnikova called on her critics to “awaken” in themselves “an aesthetic love for my post and the beauty”.

She wrote in English: “I didn't have a purpose to hurt the feelings of local people at all.

But she realised she needed to apologise in the wake of the anger over her pictures, and posted: “Please, sorry if you see something else in this.”

She said: “My intention with these pictures was to show you that I love and respect animals and especially elephants more than anything.

“I would wish that all those who are so negative will awaken an aesthetic love for my post and you will see the wonderful beauty in it.”

She had faced an outpouring of anger after she posted the pictures involving a critically endangered species. 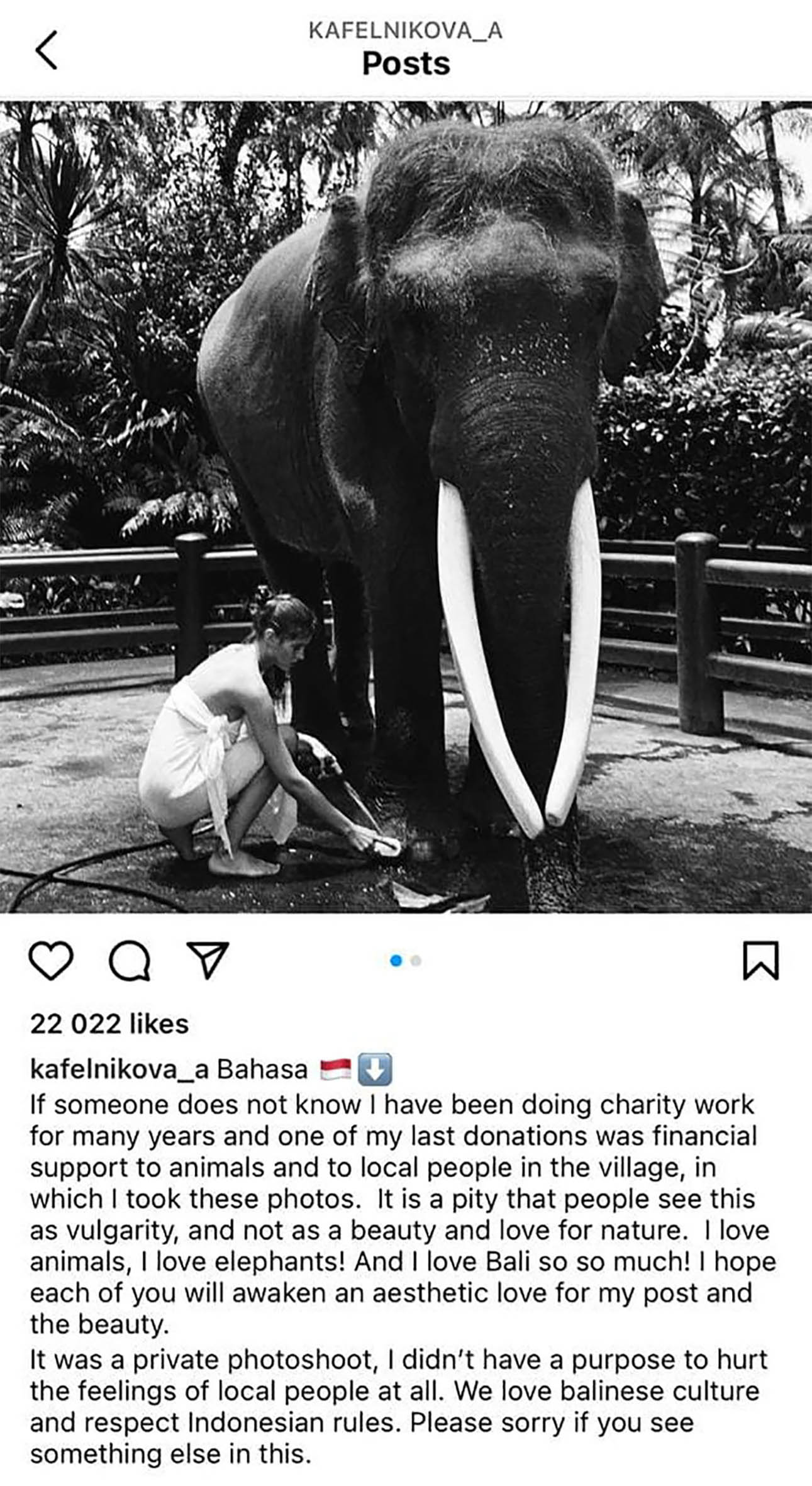 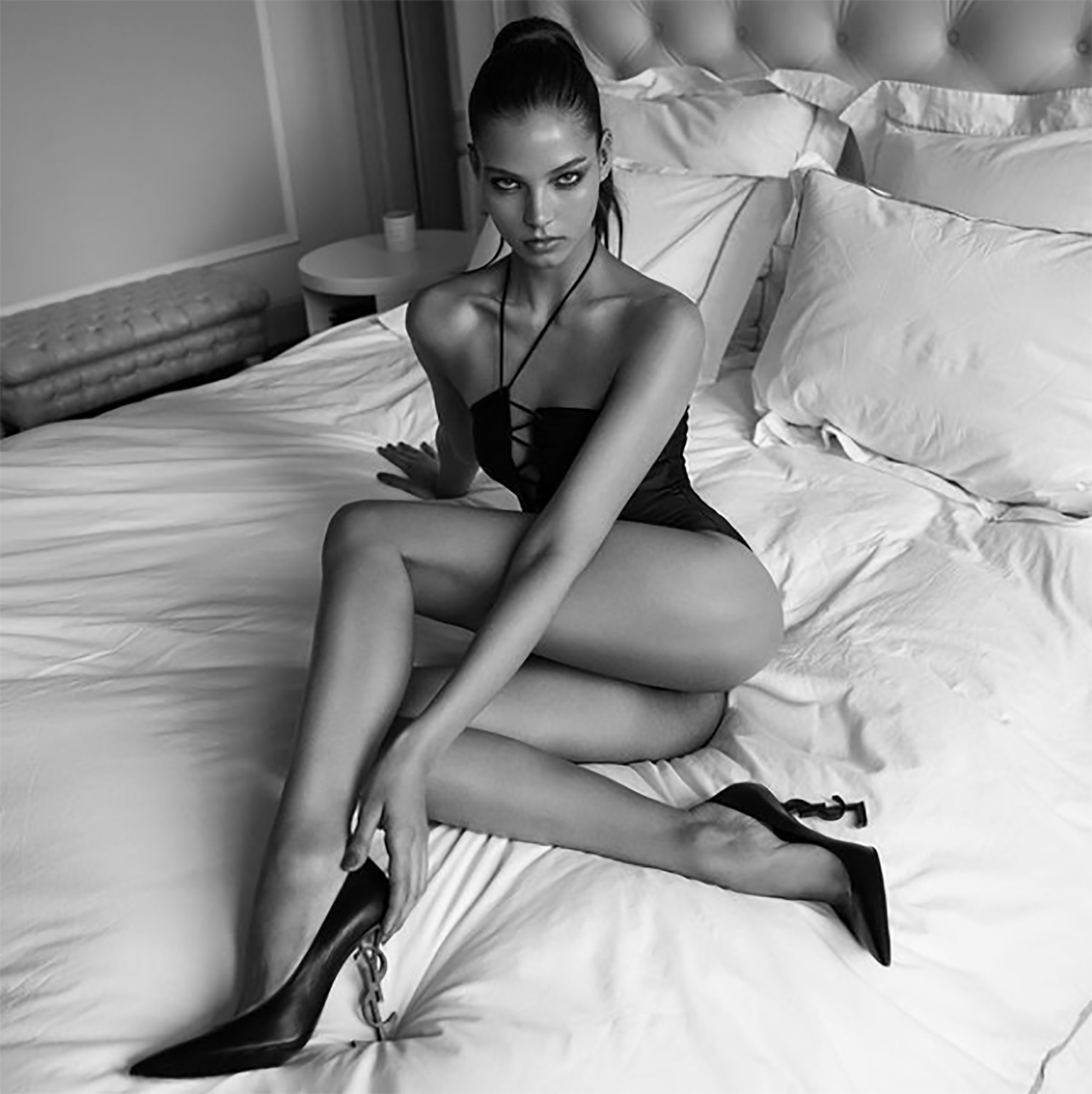 The shoot including a video clip “surely does not meet the norms that we are promoting as part of tourism in Bali,” he said.

Her Grand Slam-winning tennis star father has not commented so far, though he has not been slow to publicly criticise her.

A spokesperson from the charity Save the Asian Elephants told the SunOnline: "Yet another tragic trivialisation of the majestic Asian elephant when the species is fighting for its very existence against brutal abuse in tourism and human 'entertainment'.

"Save The Asian Elephants stands for a ban by law on the advertising and sale of unethical venues where these special creatures are commercialised with beating, stabbing and every kind of torture to break them for easy commercial exploitation - genuine sanctuaries only."

In 2012 the Sumatran elephant was changed from 'Endangered' to 'Critically Endangered' by the WWF due to deforestation and the degradation of its natural habitat.

Despite Kafelnikova posing on a Sumatran elephant in Bali, where she currently lives, the animal is not native to the Indonesian island but are kept captive to serve the tourism industry.

In the short clip, a clearly exhausted elephant is thrashed on the head over and over until he keels over and screams in pain.

The horrific scenes are thought to have been filmed at a Buddhist temple in Mirigama, Sri Lanka. 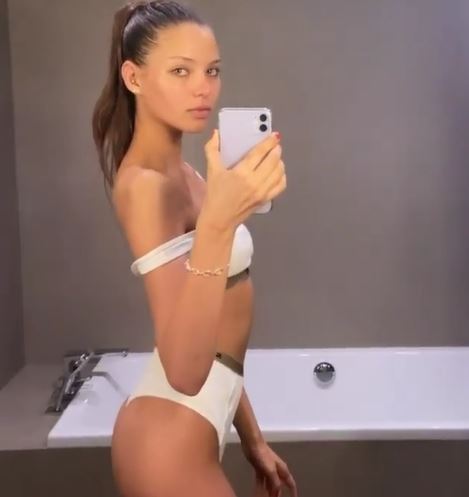 Alesya Kafelnikova claimed to have made a donation to animals and locals in the Balinese village where she did the shoot.Credit: @kafelnikova_a 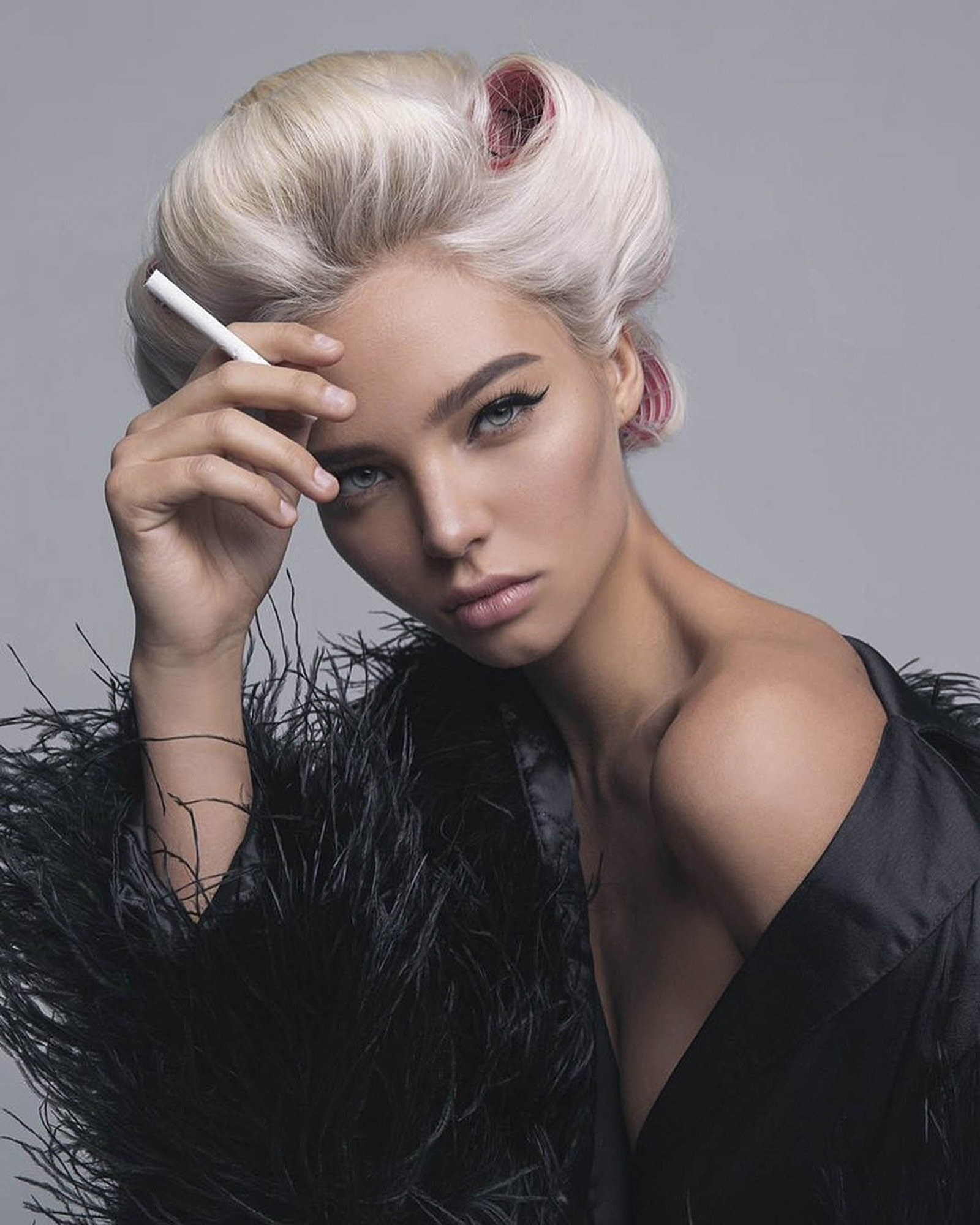 Cher is escorting “world's loneliest elephant” from Pakistan to Cambodia