VIDEO captured the shocking moment Trump supporters and counter-protesters got into a violent clash in the middle of Times Square on Sunday.

The brawl escalated after a group of counter-protesters surrounded a vehicle taking part in a pro-Trump convoy, according to reports.

Brawl fight breaks out between MAGA and Antifacists in Times Square, New York 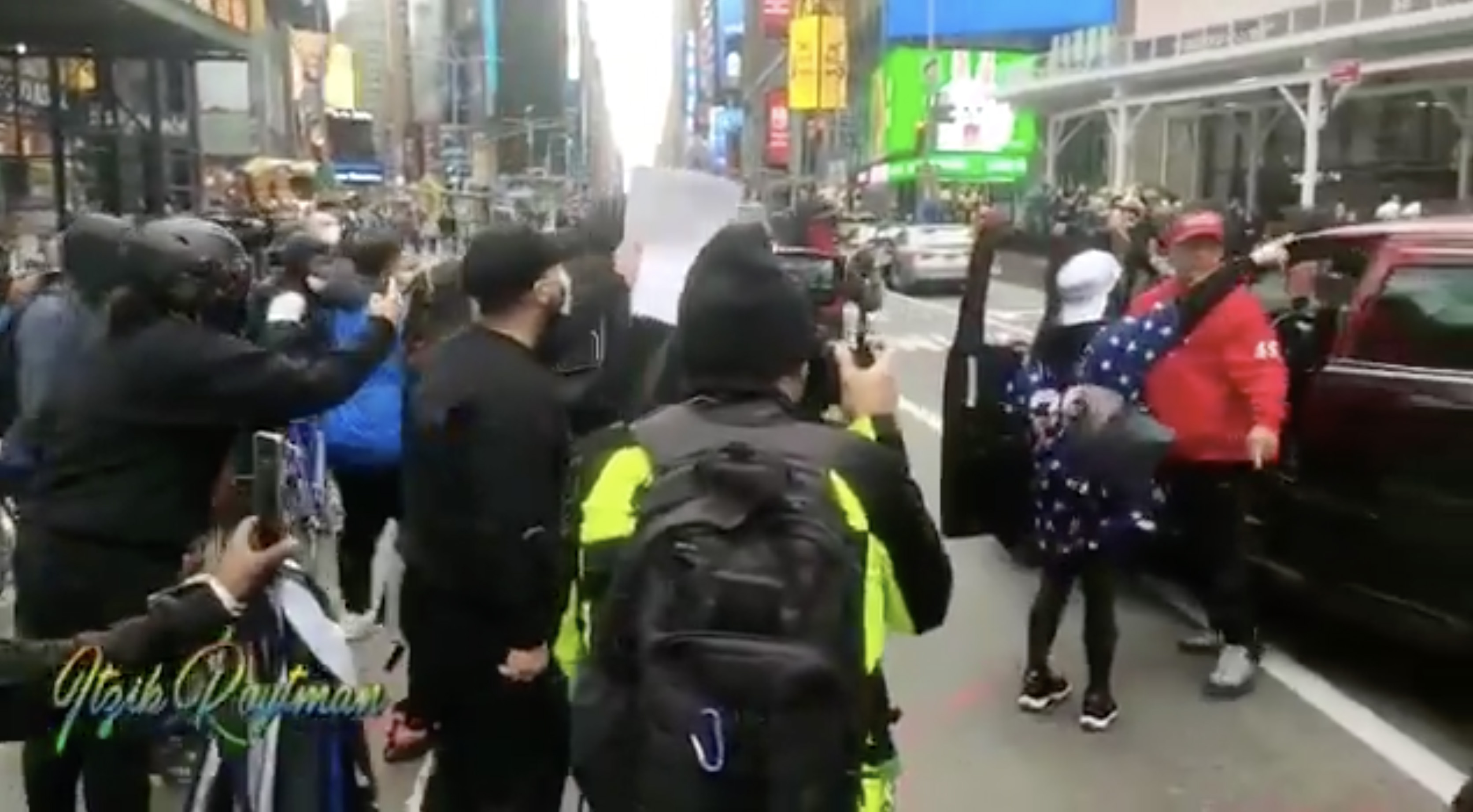 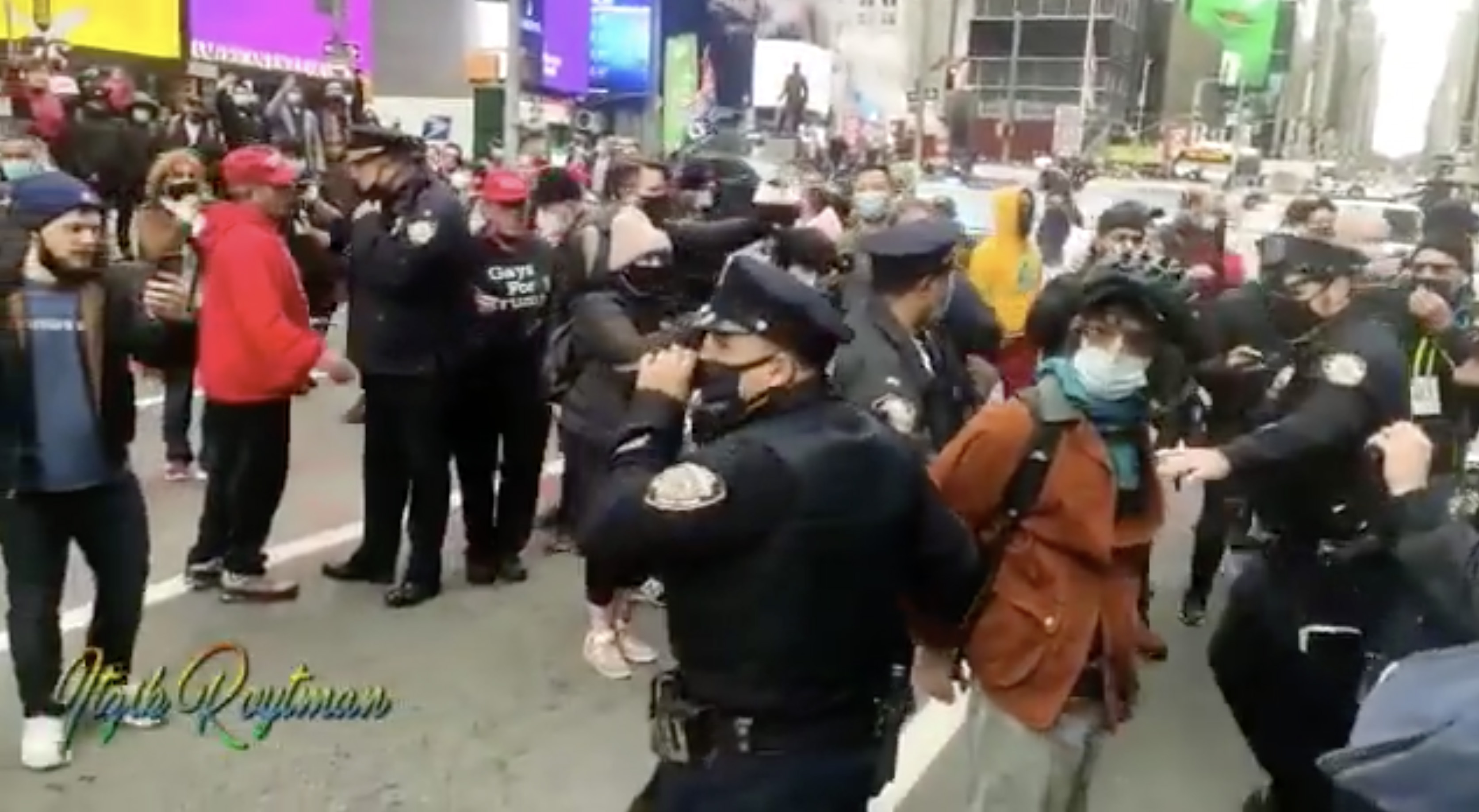 Cops can be seen on video arresting a man after the violence broke outCredit: Twitter

One video appears to show a protester ripping a flag off a pro-Trump vehicle. Another shows two men in red Trump sweatshirts and a woman wearing an American flag shirt violently engaging with the counter-protesters.

It's difficult to tell from video footage which side escalated the brawl, but multiple people can be seen frantically punching and kicking at others once it breaks out.

Another video shows one of the cars involved in the caravan covered in red paint, which accounts on social media claim was thrown by the anti-Trump protesters. 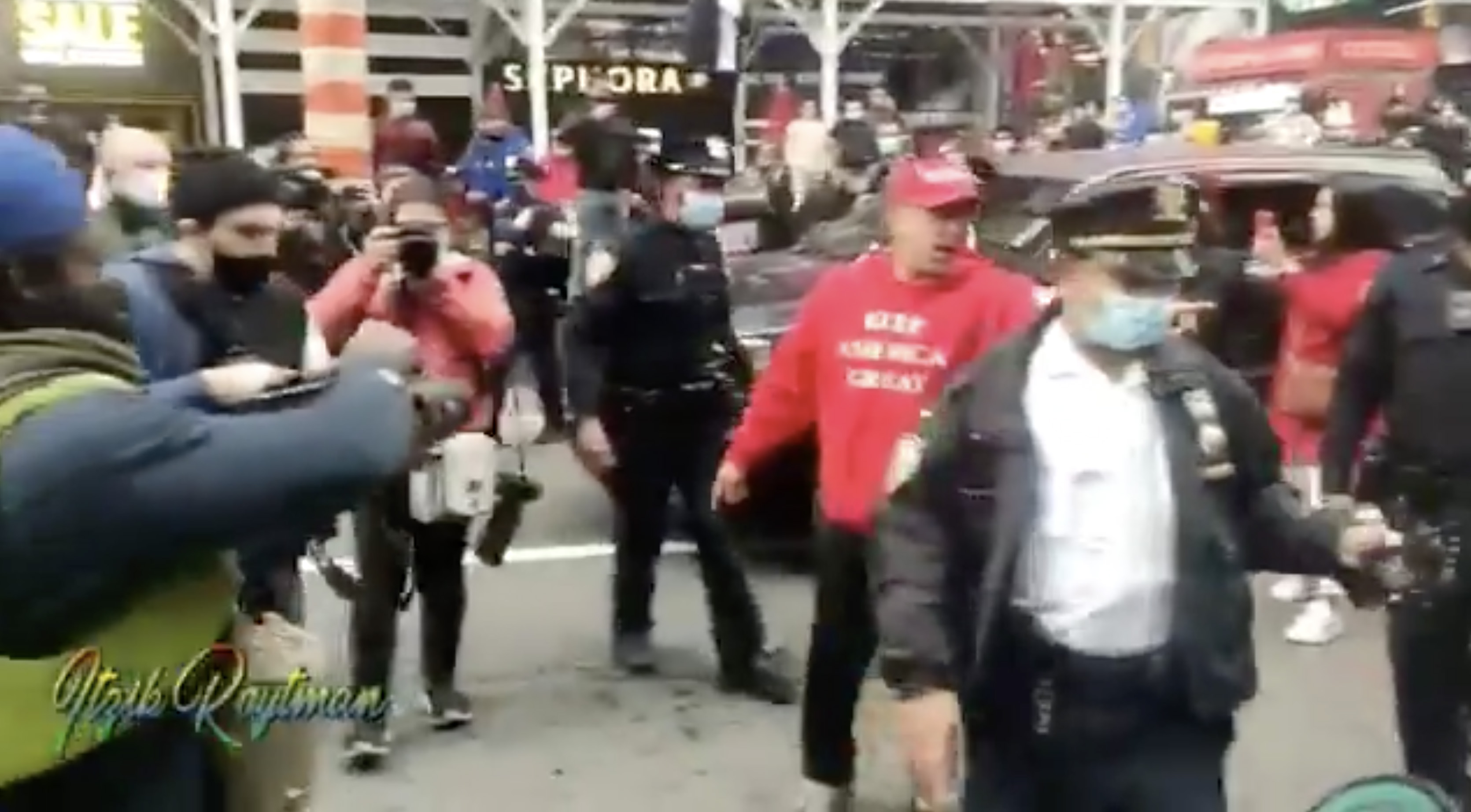 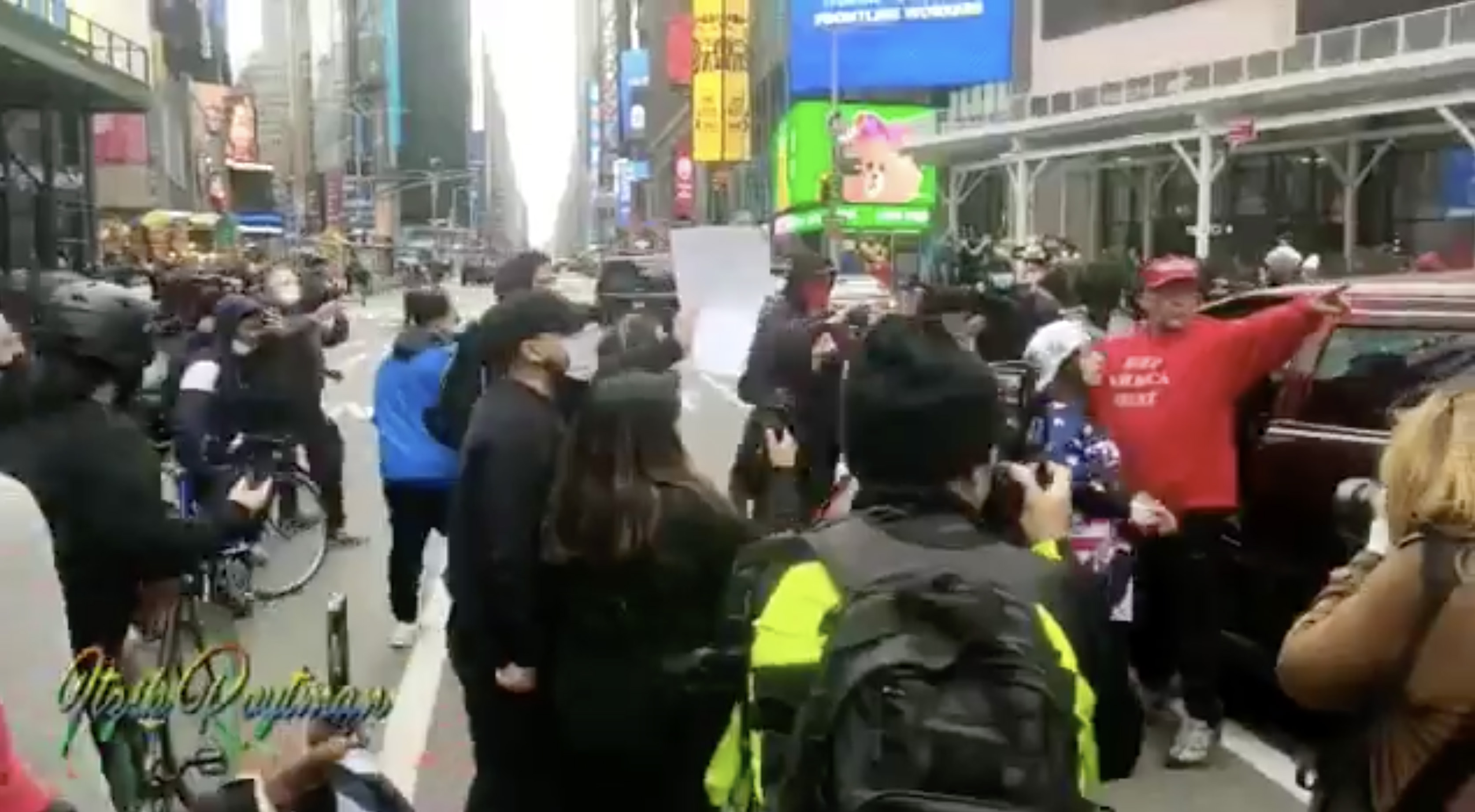 Counter-protesters appeared to surround a vehicle that was part of a pro-Trump convoyCredit: Twitter 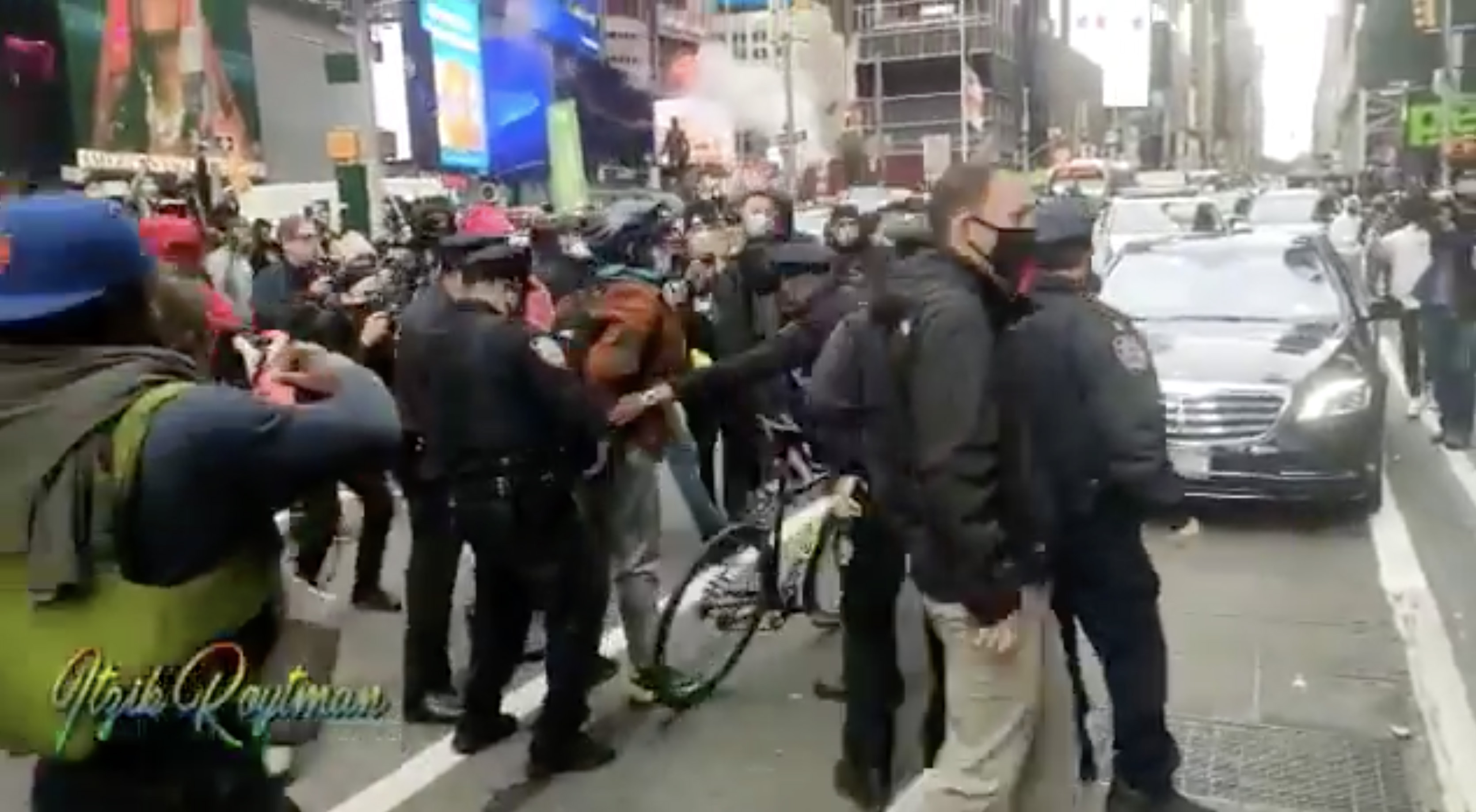 While counter-protesters shouted at cops to free the man they were arresting, Trump supporters shouted 'lock him up'Credit: Twitter

A video posted by the Twitter account @NYScanner says the cars were part of a "Jews for Trump" vehicle convoy.

The NYPD were conducting crowd control measures during the altercations, and can be seen trying to break up the fights in the video footage.

Police confirmed that five men and two women were arrested after the dispute turned physical.

Charges against the suspects are currently pending, cops said.

No officers were injured in the attempt to control the violence.

Elsewhere in the city on Sunday afternoon, former Mayor Rudy Giuliani was reportedly pelted with eggs and called "f--king scum" as he traveled in a car on the NYC streets.

In video footage of the incident, Giuliani is seen calling a cop over to the vehicle he is riding in at one point.

Members of the NYPD are then seen telling protesters to stand back as Giuliani's ride speeds away.