BRITAIN is set to be battered by heavy rain and strong winds this week - just before temperatures start to soar next month.

The soggy weather won't last long, with a balmy heat plume expected to bring highs of 17C in November.

A man and woman walk through a soggy Wimbledon CommonCredit: Rex Features

This car made a splash in Brockenhurst, Hampshire, this morningCredit: Rex Features 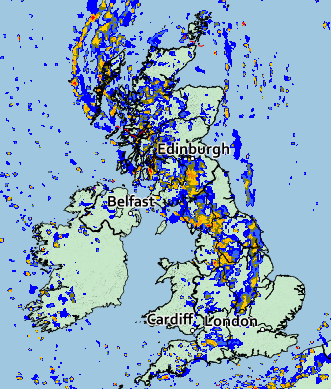 Map shows rainfall across the UK at 9am on Monday

Wind and rain will be "the main feature" this week, with Met Office forecaster Oli Claydon warning "everyone will see rain at times".

The Environment Agency has also issued four flood alerts across parts of central and southern England, meaning people in these areas should be prepared for a possible washout.

Of the week's dreary outlook, Mr Claydon told The Sun Online:  “Today will be a day of sunshine and showers with some blustery conditions in parts.

"Everyone will see rain at times throughout the day tomorrow too.

"Wednesday is a bit of a messy picture - there will be blustery conditions, with many parts seeing wind and rain through the day."

Mr Claydon added that a yellow weather warning for rain will likely be put in place for Thursday and Friday, with some areas in the Welsh hills expected to see between 100-130mm of downpours.

Blustery conditions will also take force, with gales reaching up to 40mph through the Dover Strait.

The grim outlook shouldn't last long, as Brian Gaze at Weather Outlook claims there will be "notable warmth" in November.

He tweeted: "I've not looked at the data in depth but am beginning to wonder if we could see some notable warmth in early November.

"At this time of year a lot can go wrong but is 20C out of the question?

A jet stream over the North Atlantic will blast low pressure towards the UK.

This comes as the country has been battered by gales of up to 50 miles an hour and torrential rain - sparking flood alerts.

On Saturday, parts of England and Wales were lashed by heavy rain, leaving The Cobb Harbour wall in Dorset completely awash after days of downpour.

Huge waves gathered and bashed up against train lines in Devon.

But Manchester's high streets were still packed as Brits ignored the rain and hit the shops.

And windsurfers off Scotland's coast battled the waves and lapped up the gale force winds.

The Met Office's long-range forecast for November says: "For the remainder of November, it is likely to be a tale of [two] halves.

"The start of this period looks set to see high pressure dominate, bringing more settled than seen in recent times, particularly for the south with any wet and windy weather most likely to affect the north-west. 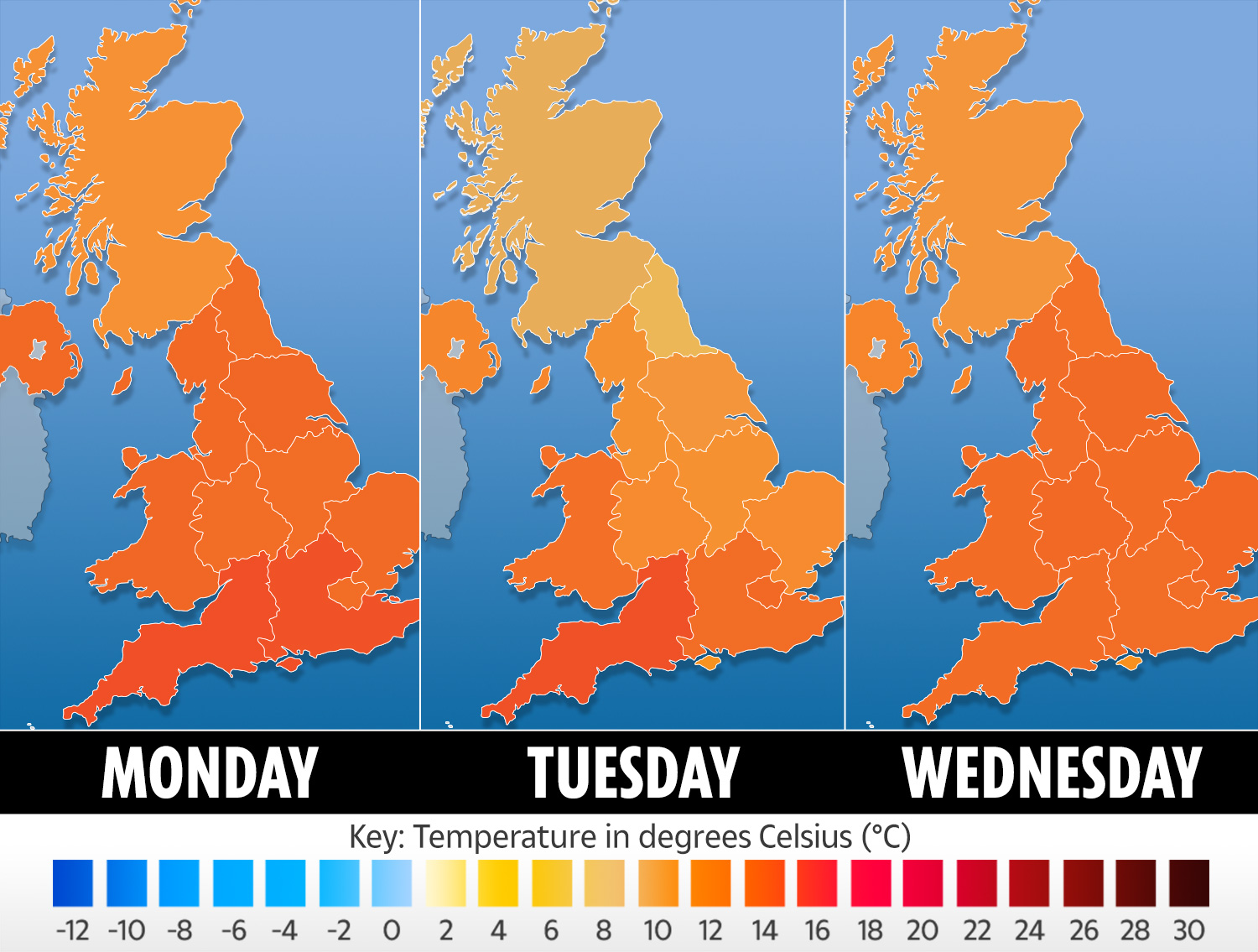 "Although confidence lowers toward the end of November, a return to unsettled autumnal weather is most likely, with showers or longer spells of rain and strong winds, interspersed with drier intervals.

"Overall, temperatures are anticipated to be at or below average for this time of year."

And the BBC's longer range weather predictions say: "Wet and windy for a while longer. Drier mid-month.

"The weather is looking unsettled into early November, particularly across the northern half of the UK.

"Low pressure areas will be driven eastwards over the north Atlantic and into the UK, depositing rainfall and ushering in blustery winds once again.

"Some of the showers over high ground in the north and west will fall as sleet, hail and occasionally snow."

It adds: "The most likely outcome for mid-November is that a ridge of high pressure over Scandinavia and central Europe should shift westwards to sit over England and Wales, allowing for a drier pattern of weather here."

Temperatures of 17C are expected for the start of NovemberCredit: ©Graham Hunt 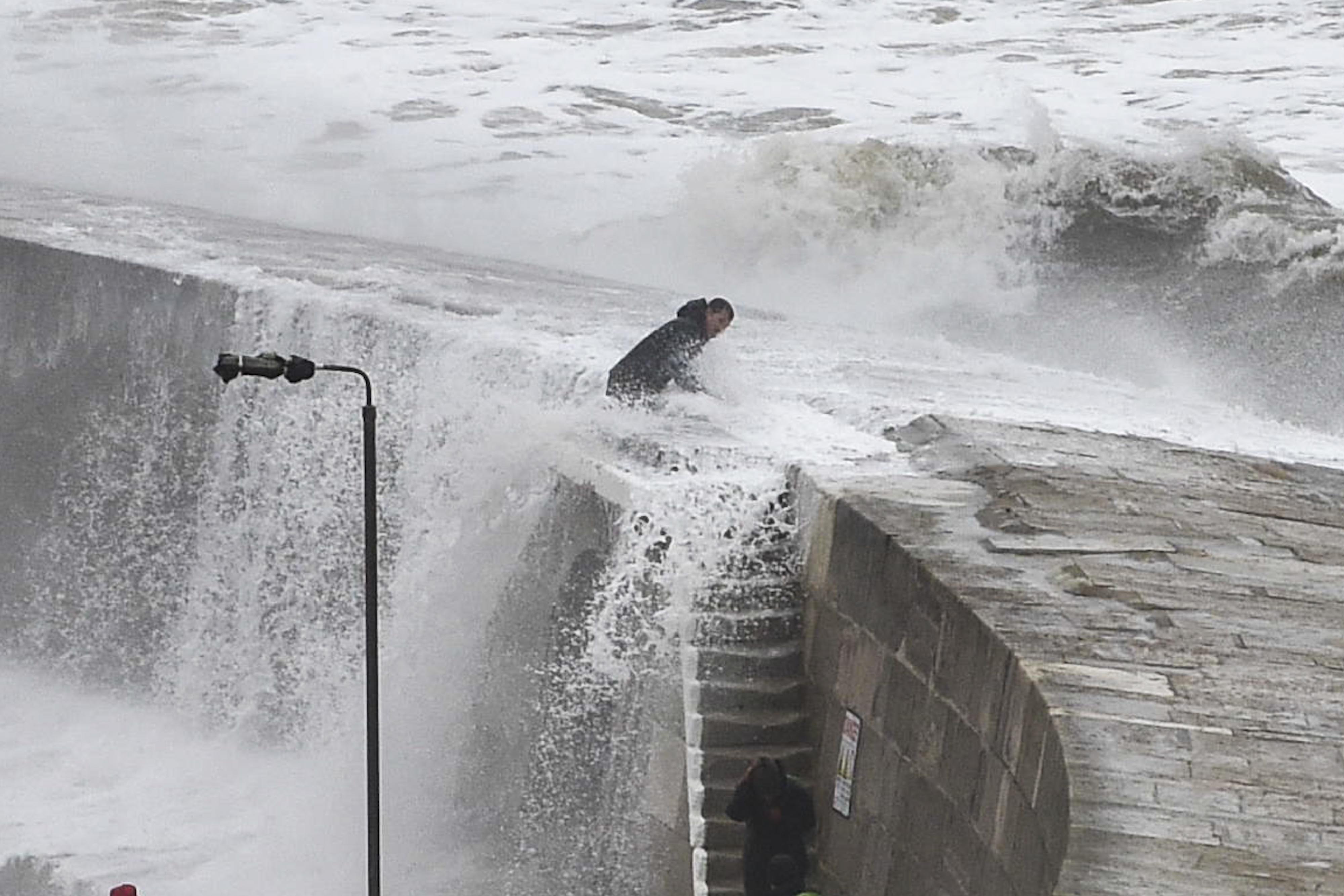 Some tourists were caught in dangerous conditions in Dorset 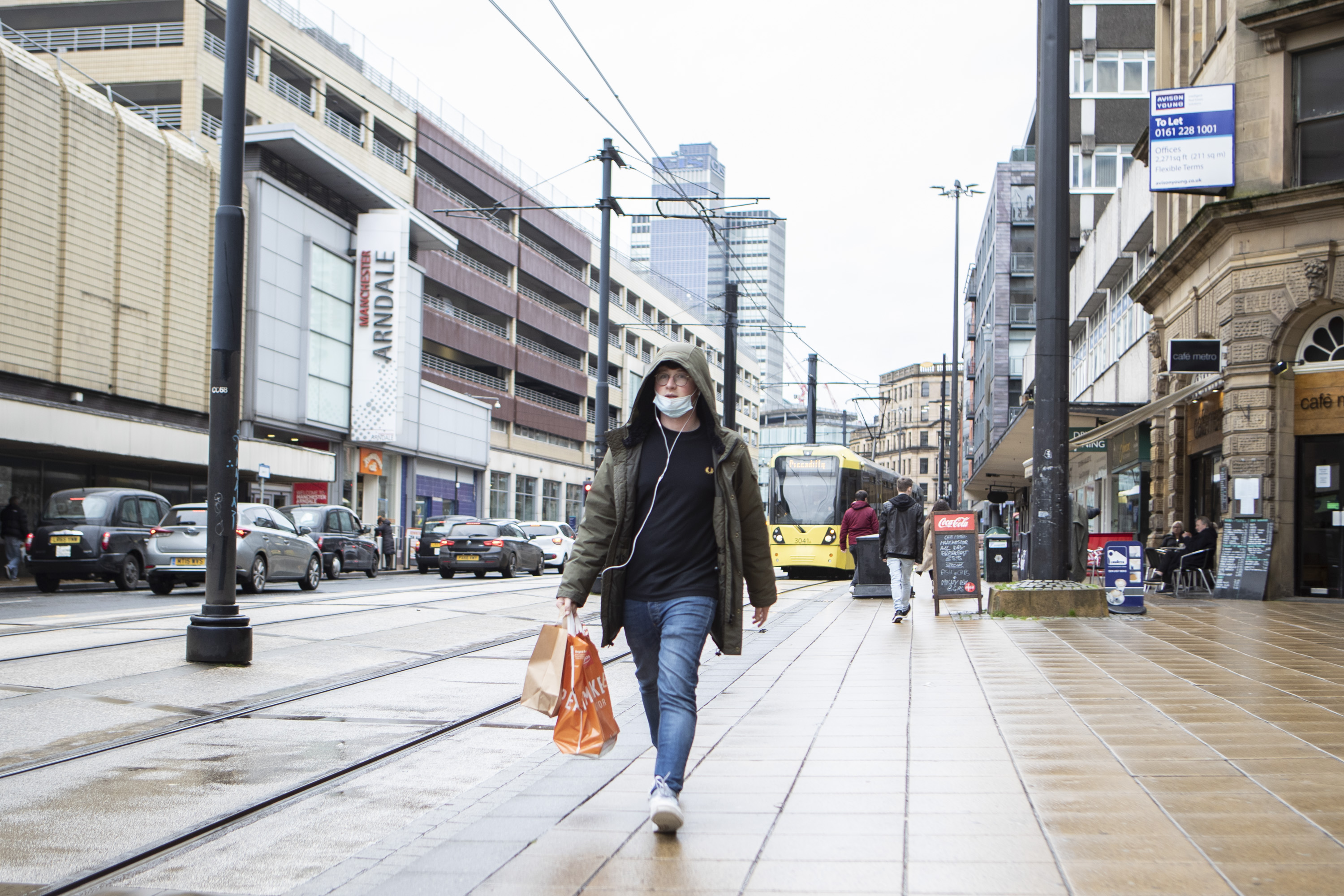 People in Manchester ignored the rain and hit the high street 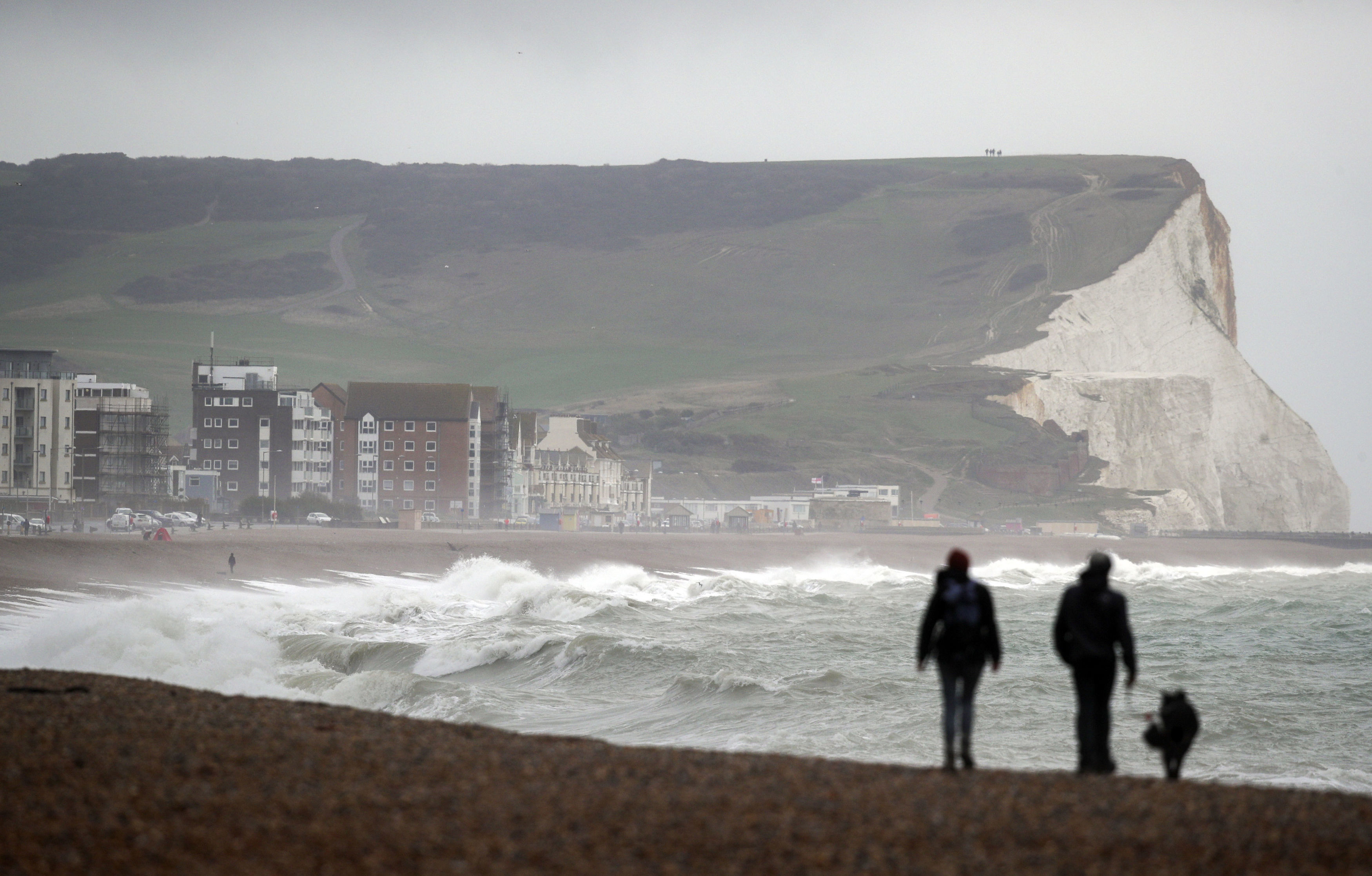 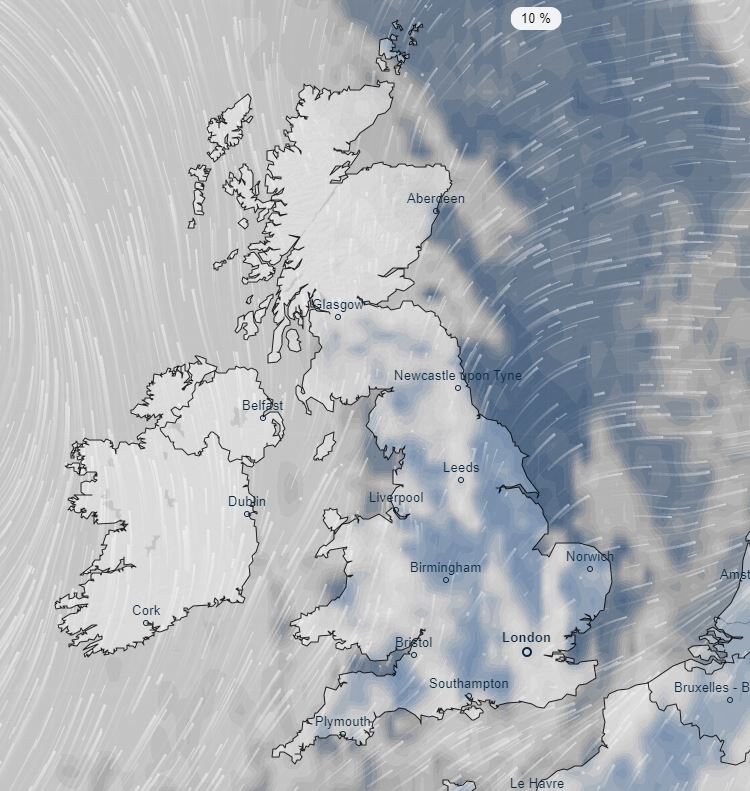 Snow expected for some of the month