BRITAIN could face a month's rain in just 36 hours over Thursday and Friday.

It comes as the remnants of Hurricane Epsilon are set to bring heavy rain and strong winds to the UK.

Wales will be hit the hardest with more than 132 mm of rainfall in just one-and-a-half days, well over the UK’s MONTHLY average of 90mm.

And blustery weather could push through until Saturday, putting a wet end to any Halloween celebrations.

Follow our weather live blog for all the latest news and updates...

It’s set to be a cold and windy day across Britain today, with rain in the Northern Isles clearing this morning.

All parts will see a mixture of sunny spells and showers, with things driest in the north east.

Some showers will be heavy with hail and thunder in places, the Met Office has said.

The map below shows temperatures across the UK for 9am today. 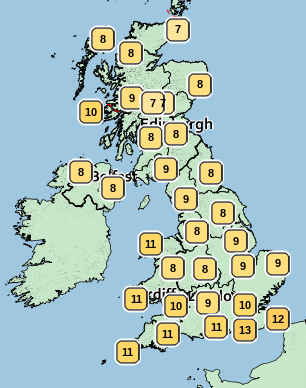 Chlorophyll is the chemical which makes tree leaves green and as it declines other chemicals become more prominent in the leaves.

These are responsible for the vibrant ambers, reds and yellows of autumn.

The chemicals responsible are types of flavonoids, carotenoids and anthocyanins.

OUTLOOK FOR THURSDAY TO SATURDAY

The weather will continue to be wet and windy as we head towards the end of the week.

On Thursday, outbreaks of rain, heavy on western hills, will spread across most parts of the UK.

On Friday, rain is expected in parts of England and Wales, while Scotland becomes dry and bright.

More rain is set to hit the country on Saturday, the Met Office said.

The next full Moon will be the Blue Moon on October 31.

Unfortunately, its name has nothing to do with its colour and the Moon should just look pearly grey.

A Blue Moon refers to the very rare occasion when a full Moon appears for the second time in the same month. 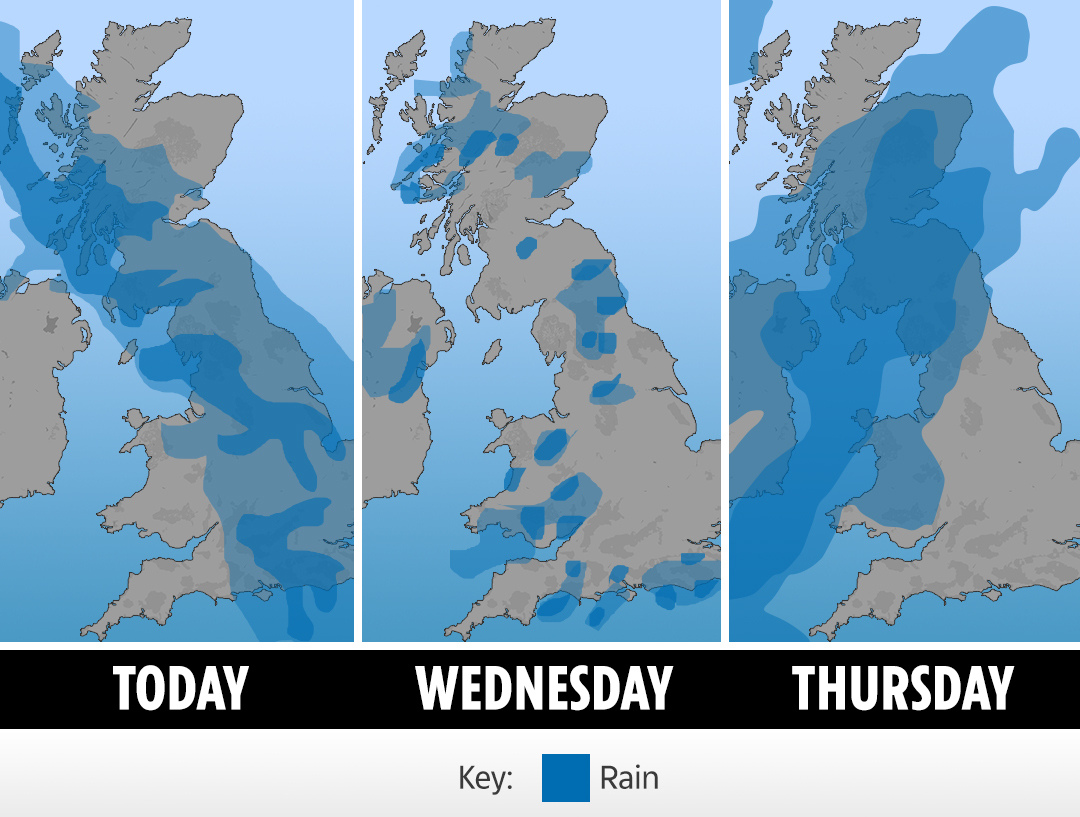 Substantial rainfall will hit the country from Thursday until the weekend, with up to 130mm of rain predicted in the Welsh mountains, and averages of 30-40mm for the rest of the UK.

Aerial view of autumn colours on Derwent Isle on Derwentwater, near Keswick in the Lake District. 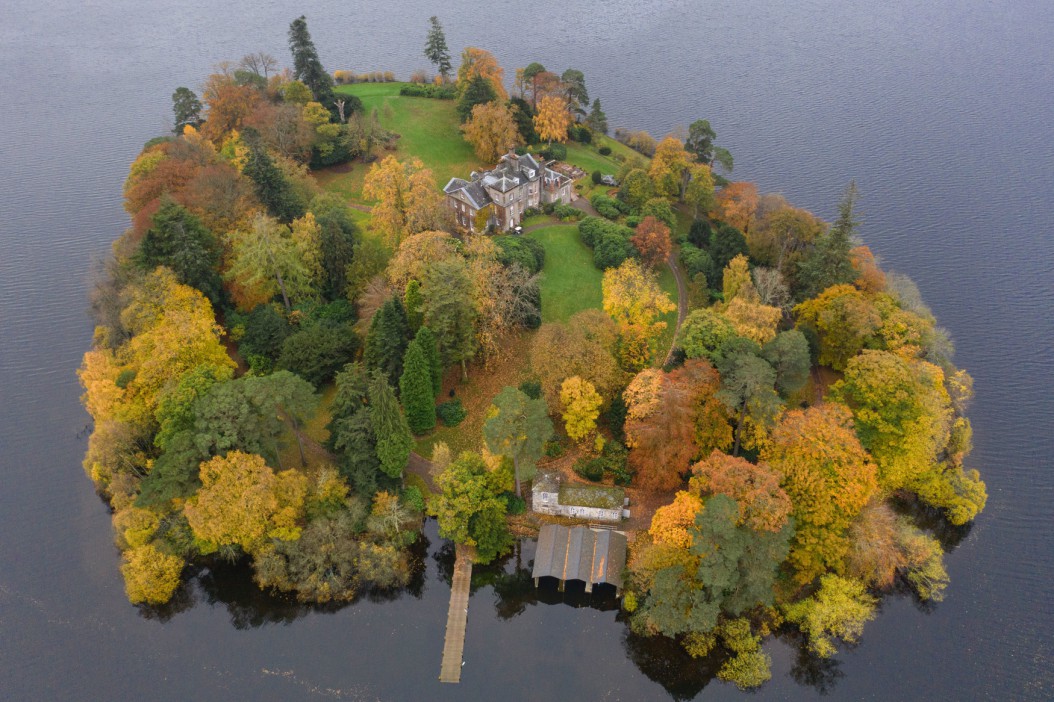 The Met Office's weather forecast for Wednesday says: “Blustery showers in the west, some heavy and thundery, spreading to all parts by afternoon.

“Windy, especially around western and southern coasts where gales are likely. Feeling cool.”

The end of October is set to remain unstable, the Met Office said.

A 'mega-tsunami' could be caused by a melting Alaska glacier, scientists have warned.

The concerned experts claim the catastrophic event could even happen within the next 12 months if melting ice triggers a landslide of unstable rocks. 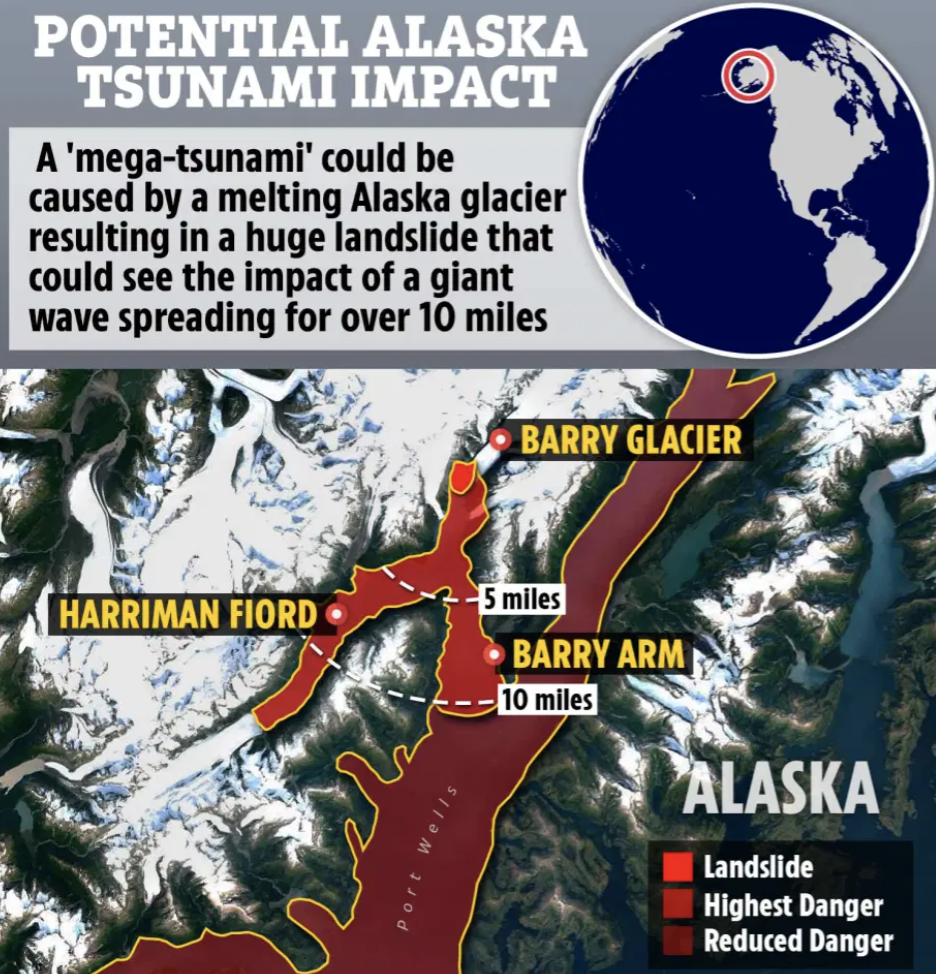 THIS EVENING AND TONIGHT

The Met Office's weather forecast for this evening and tonight says: “Cloud and rain across Scotland, some heavy in the east.

“Clear spells and showers following, the showers most frequent in the west, with some eastern parts remaining dry. Windy.” 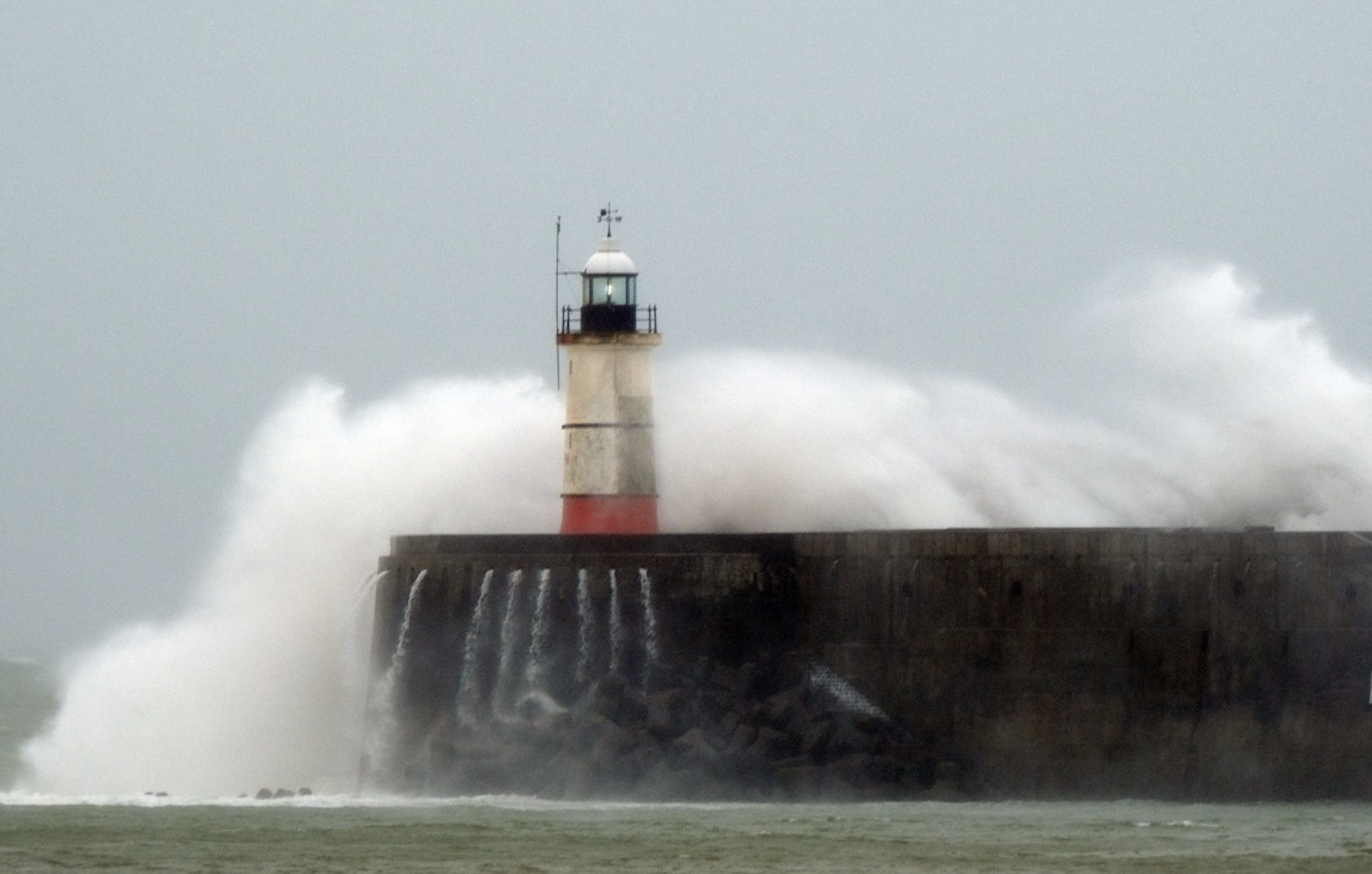 WETTEST REGIONS IN THE UK THIS OCTOBER 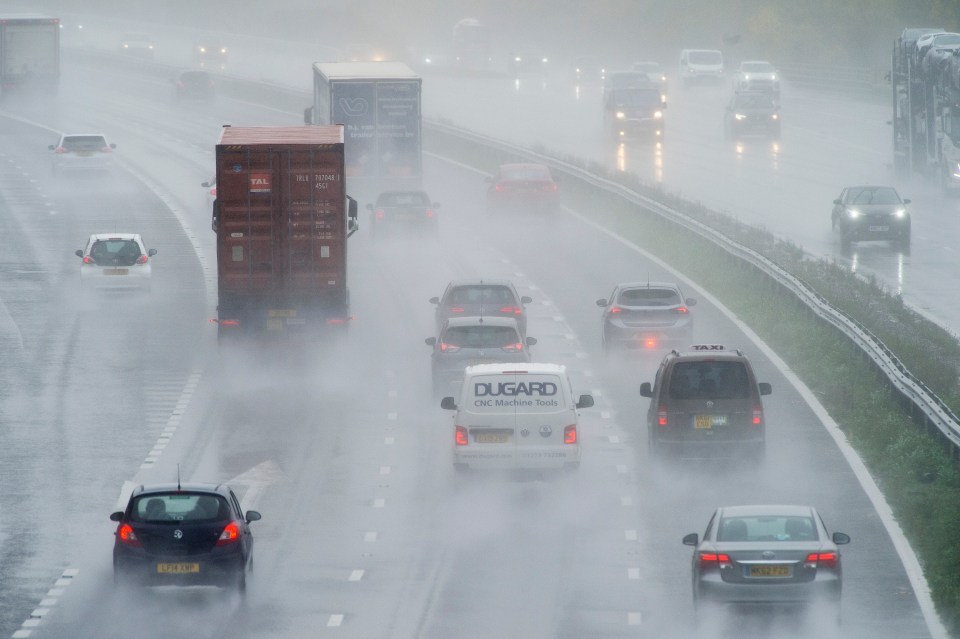 FEBRUARY WAS WETTEST MONTH IN 2020 SO FAR

The wettest month for the UK in 2020 so far was February, when many regions were hit with devastating floods which destroyed homes and businesses.

Forecaster Garhame Madge said climate change is having a “pronounced effect” on temperatures in the UK, raising averages by about 1C since pre-industrial times, and the warmer atmosphere could be causing increased rainfall too.

He added that UK climate projections show warmer, wetter winters and hotter, drier summers will lead to “more extreme rainfall records” by the end of the century.

ABOVE AVERAGE RAINFALL FOR UK

Rainfall around the UK has been only “slightly above average”, forecaster Grahame Madge said.

“Virtually everywhere was wet on October 3, but since then there have been pockets of the UK which has seen higher rainfall totals, especially London and parts of the south-east,” he said.

“This is because of the way the jet stream has steered low-pressure systems more to the south of England.”

LONDONERS COULD BE IN FOR WETTEST MONTH IN 150 YEARS

Londoners may be experiencing the wettest month for more than 150 years, the Met Office has said..

October is usually the wettest month in the UK and rainfall this year has been largely concentrated in Greater London, the home counties in south-east England, and a smaller area of north-east Scotland.

The capital has had 139mm of rain up to the October 25, compared with the full month's average of 78mm.

With rainfall for the final six days of the month yet to be recorded, October 2020 is already ranking ninth rainiest in London since 1862.

Met Office spokesperson Grahame Madge said with “considerable rainfall” expected in the coming days it is “quite likely” this month will break the October record, and potentially for any month.

Chilly Scots are really feeling the autumn onslaught as the mercury plunges to 5C in parts.

Glen Doll in Angus is a brisk 5C this afternoon, with a “feels like” temperature of just one degree, according to Frixo.

And according to the Met Office the highest temperature in the region today will only be around 7C.

Autumn colours on Derwent Isle on Derwentwater, near Keswick in the Lake District. 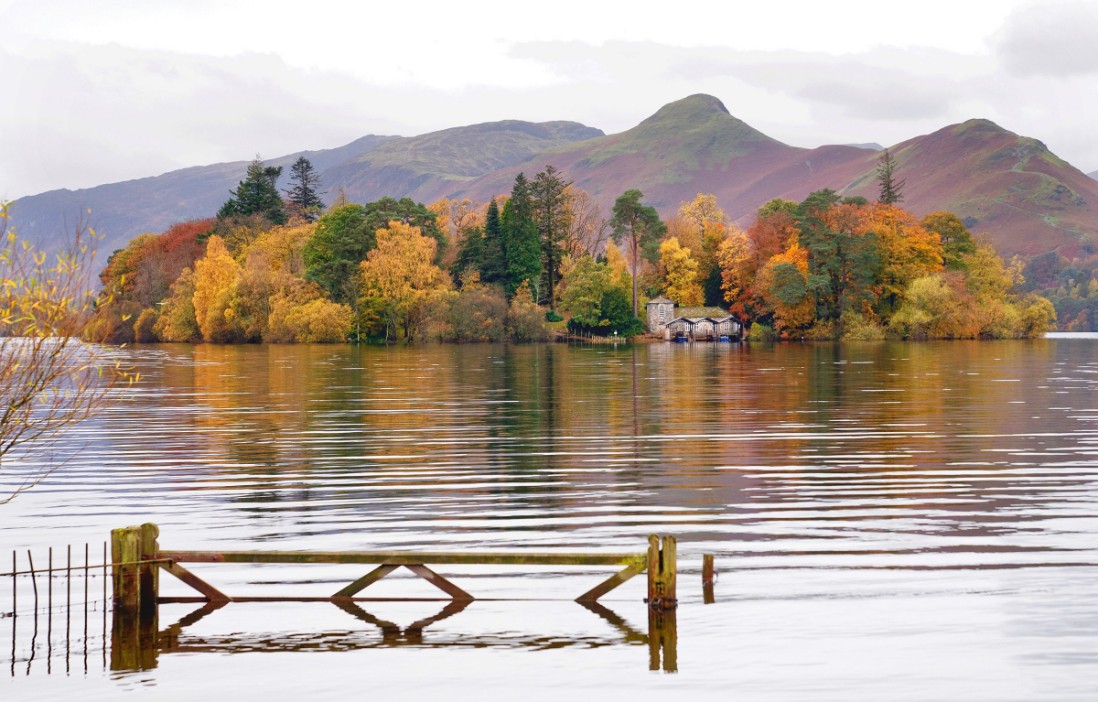 Despite some unsettled weather, Brits were seen enjoying themselves as they were pictured riding the waves in St Ives today.

Paddle boarders were trying to catch the ideal wave while surfers were struggling to stay on their feet.

Temperatures in the Cornish town are expected to dip this afternoon to 11C but the rain is expected to hold off. 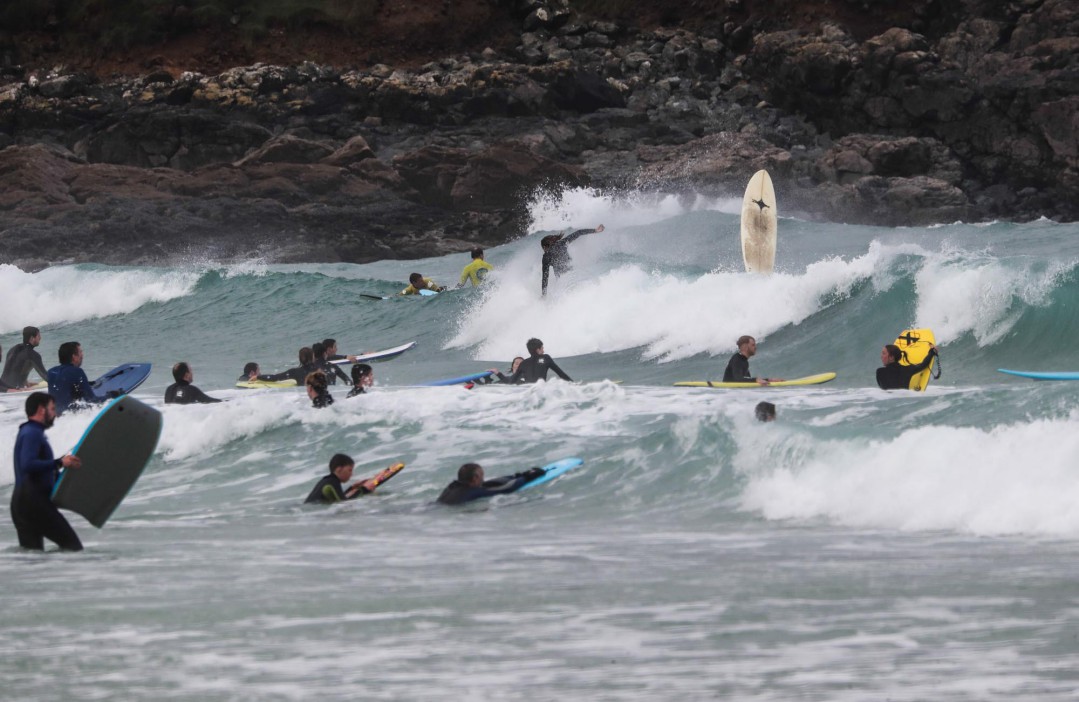 According to the Met Office Brits will see an unsettled end to this month.

A spokesperson for the Met Office said: “With the Atlantic continuing to dominate the UK weather forecast, we can expect the rest of the month to remain unsettled with heavy rain and strong winds, interspersed with brighter periods.”

The spectacular sight was captured on camera at Mealt Falls on the Isle of Skye, Scottish Highlands.

Thomas Lamont, 32, was visiting the popular falls this morning while on holiday in Skye and was nearly blown off his feet by the powerful coastal gusts.

The project manager, from Falkirk, was stunned by what he saw and said the water was pushed as far back as the nearby car park, which left visitors soaked. 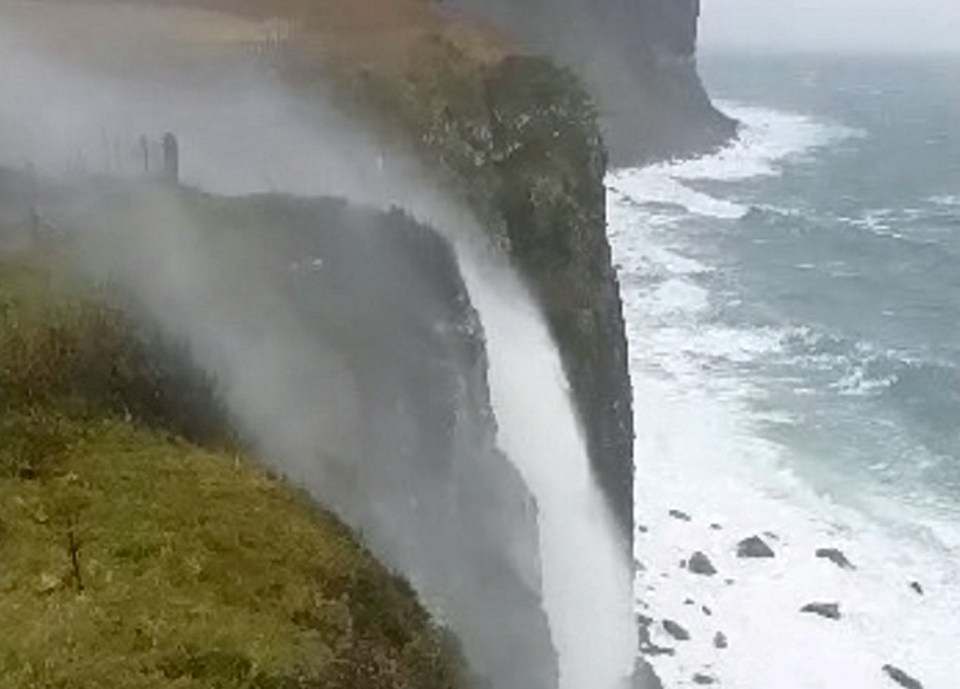 ‘WARM CONVEYOR’ BRINGING MOIST AIR AT THE END OF THE WEEK

A “warm conveyor” will bring moist air and rain over the end of this week.

Speaking to MailOnline Chief Meteorologist Andy Page said: “It is rain rather than wind that will dominate our attention later in the week with a so-called 'warm conveyor' set up to bring a flow of very moist and warm air to the UK from further south in the Atlantic, triggering heavy rainfall for high ground in the west of the UK.

“We have issued a Yellow warning covering parts of Wales and North-west England for Thursday and Friday as additional rainfall in these areas may lead to impacts, including flooding.

The remnants of a hurricane will batter Britain this week.

The tail-end of Hurricane Epsilon will bring more than a MONTH’S rain in just 36 hours.

Wales will be hit the hardest with more than 132 mm of rainfall in just one-and-a-half days, well over the UK’s MONTHLY average of 90mm.

And blustery weather could push through until Saturday, putting a wet end to any Halloween celebrations.

According to forecasters, the remnants of former Hurricane Epsilon have been sucked into a deep, dark area of low pressure bringing wind and rain to the UK.