Weather forecast UK: Hail and sleet to hit Britain tomorrow ahead of pubs reopening on Monday

HAIL and sleet are due to hit Britain tomorrow - but the sun is expected to make an appearance on Monday in time for pubs and shops reopening on April 12.

Despite the sun it is still expected to be cold on Monday so anyone venturing out for a pint should probably take a coat.

Forecasters say most of the country will remain dry but temperatures could be on the chilly side, around 10C at best.

The weekend will see a divide between the two halves of the UK, with Brits to see wintry showers up north and dry, sunny conditions in the south.

Met Office spokeswoman Nicola Maxey said Monday would be “a cold day with bright weather for most”, adding: “It’s certainly looking fine, dry and cold in the South.”

England saw its coldest April day in eight years on Wednesday, with the temperature hitting a freezing -7.5C in Benson, South Oxfordshire.

And another Arctic plunge is on its way to the UK, according to The Weather Outlook.

The forecaster predicted in an update: "A band of patchy rain pushes down over central and southern counties today.

"Areas to its north will be cold and bright, but wintry showers develop.

"The weekend brings sleet or snow showers to central and northern regions. In parts of the south there is a risk of longer spells of rain, sleet and snow."

Follow all the latest news and updates in our live weather blog below...

THIS WEEK’S FORECAST FROM SNOW TO SUN

This weekend will see wintry showers to rain, sleet and snow in central and northern parts of Britain. Frost and icy patches will develop, alongside patchy rain over the south-east.

By Wednesday, most of the country will experience temperatures above 10C with London getting to 14C.

Areas up north will not be far behind with Aberdeen expecting to reach 11C on Tuesday.

Brits can enjoy the double-digit temperatures - while having frosty and cold evenings.

And mercury is then set to rocket to 16C on Thursday. It will hold at 16C through until April 19.

Brits are set to bask in a mini-heatwave next week, after a chilly weekend with wintry showers, sleet, and snow.

Pub-goers will be able to soak up the sun in beer gardens across the UK on Monday after four months.

On Monday, temperatures will reach between 5C and 10C, hitting a high of 12C in some areas of the UK. While it will still be fresh and chilly, the day will likely be bright and dry as outdoor hospitality, hairdressers, and shops open for the first time in four months. 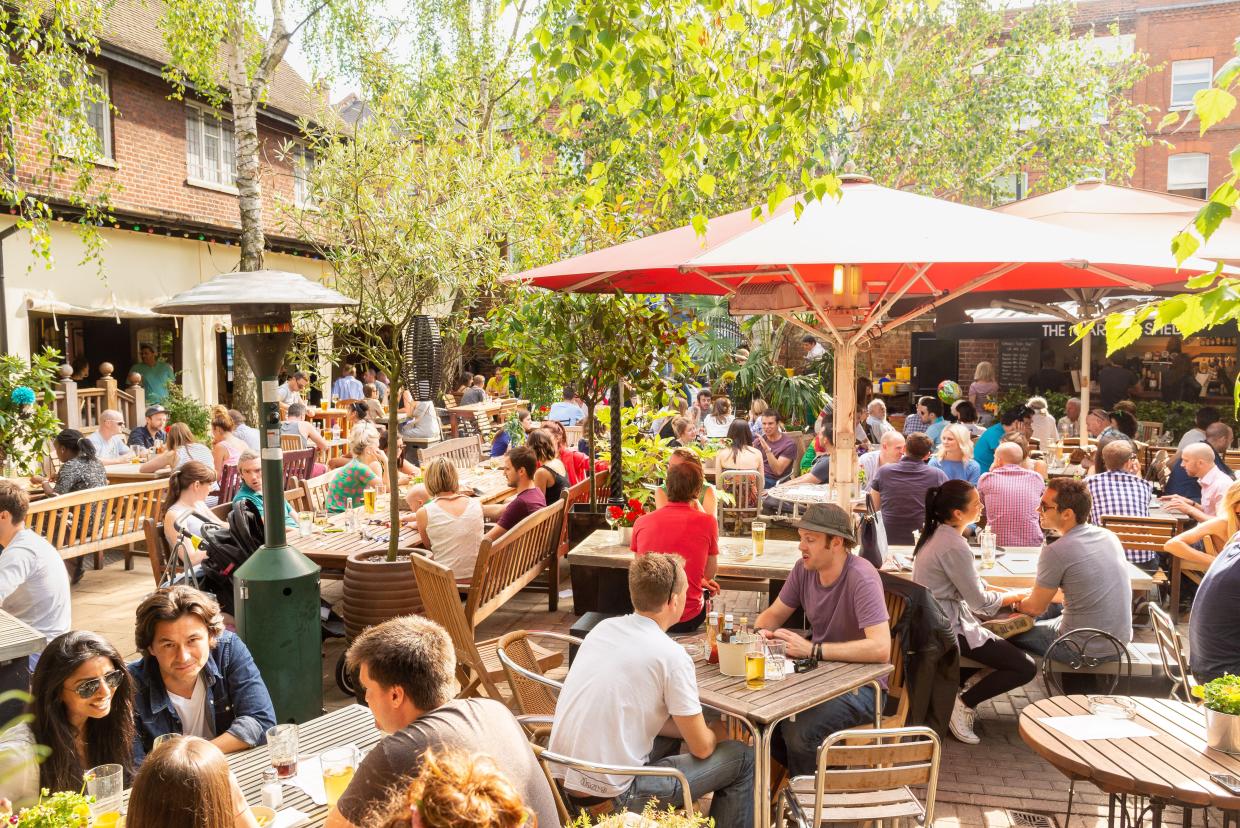 WEATHER OUTLOOK FOR MONDAY TO WEDNESDAY

The Met Office predict outbreaks of rain and some hill snow across southern parts Monday and the northwest Tuesday, elsewhere mainly dry with sunny spells.

The Met Office have forecasted Sunday’s weather to be a combination of rain, sleet, snow and small hail.

Cold although less so than Saturday in the southeast.

The Met Office have forecasted for tonight wintry showers of rain, sleet and snow in central parts mostly dying out, but continuing in the north and near coasts exposed to the northerly flow.

Frost and icy patches developing. Patchy rain over the SE dying out by morning.

If greenhouse gas emissions continue to rise, up to a third of endemic species living on land - as well as about half living in the sea - face extinction, a new report has revealed.

A study published in the journal Biological Conservation on Friday claims that if the planet heats by more than 3C, animals and plants face mass extinction.

On mountains, 84% of native animals and plants face being wiped out at these temperatures, while on islands the number rises to 100%.

Met Office forecasters predict “very cold and wintry” weather for the UK and even some snow in the first week pub beer gardens reopen from April 12.

They added that mid-April weather can be difficult to predict ahead of time, but as the week goes on there is likely to be “further spells of unsettled weather with some showers or longer spells of rain crossing all parts of the UK”.

By the end of the week, temperatures should be close to average for this time of year, which is around 12ºC.

New weather forecasts predict Brits will have to brace for more wintry conditions across the country.

WXCharts' minimum temperatures charts also show temperatures will plummet to -2C in most parts of England and Wales tomorrow, and as low as -6C in Scotland.

Spring lambs have been braving the cold weather this weekend.

The newborns were captured in Litton, Derbyshire Peak District, by farmer Rachel Rennie.

Rachel said: “They're bred from hardy mountain sheep so have a thicker coat than most and can cope with cold weather thankfully.” 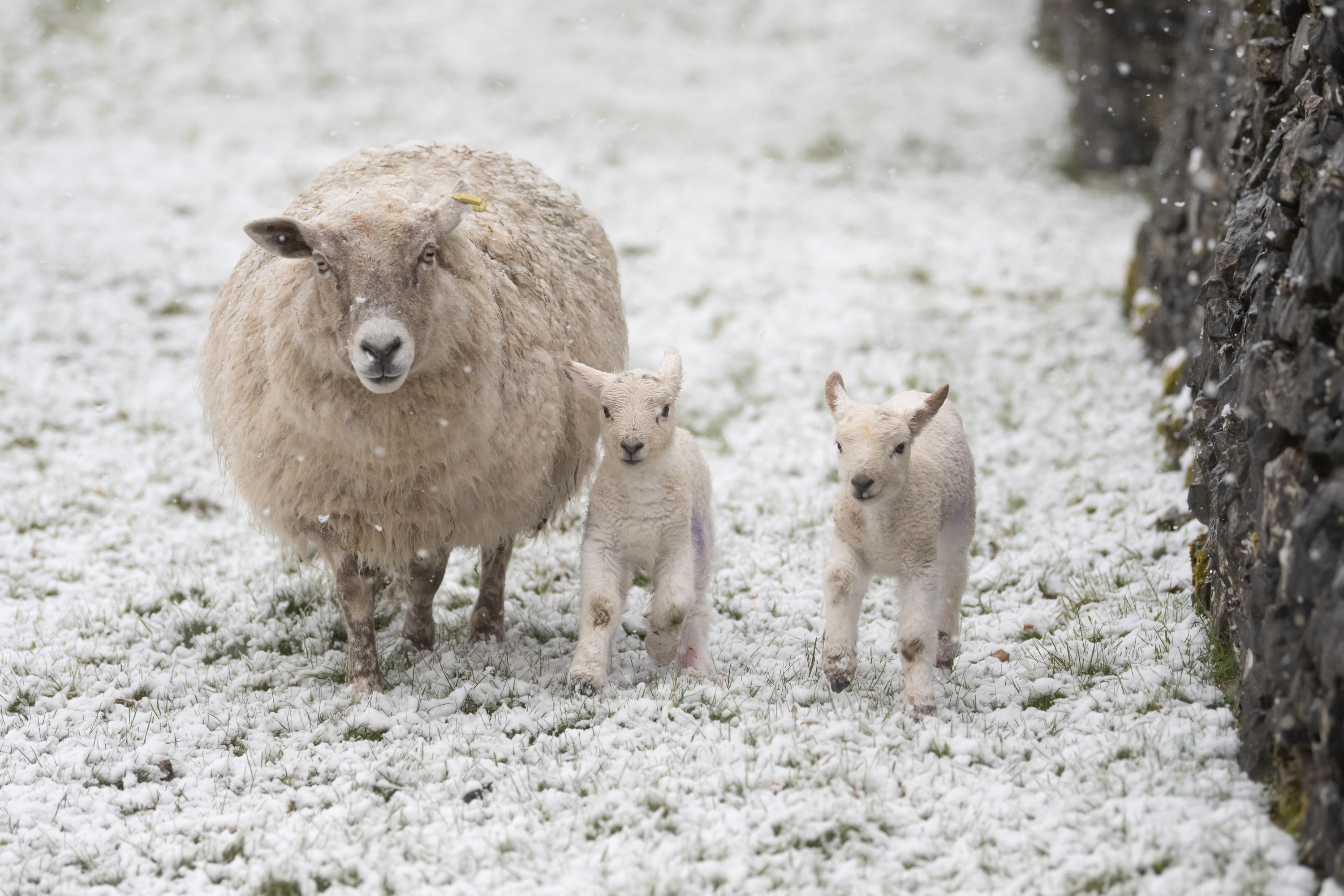 Despite snow falling in some parts of the UK today, temperatures are expected to soar by the middle of next week.

Frost is possible in most areas of the UK overnight, with temperatures predicted to get as low as -7C in a few isolated spots.

But from the beginning of next week, the outlook is set to be warmer and brighter.

A mild band of air from the Atlantic will improve things slightly, before the UK sees high pressure from Tuesday onwards.

WINTRY SHOWERS FOR MOST OF UK THIS EVENING

Most of the UK will see wintry showers this evening.

In the latest update from the Met Office, Scotland, Wales and central England will be hit.

The southeast will also see some rain but this will clear away as the evening progresses. 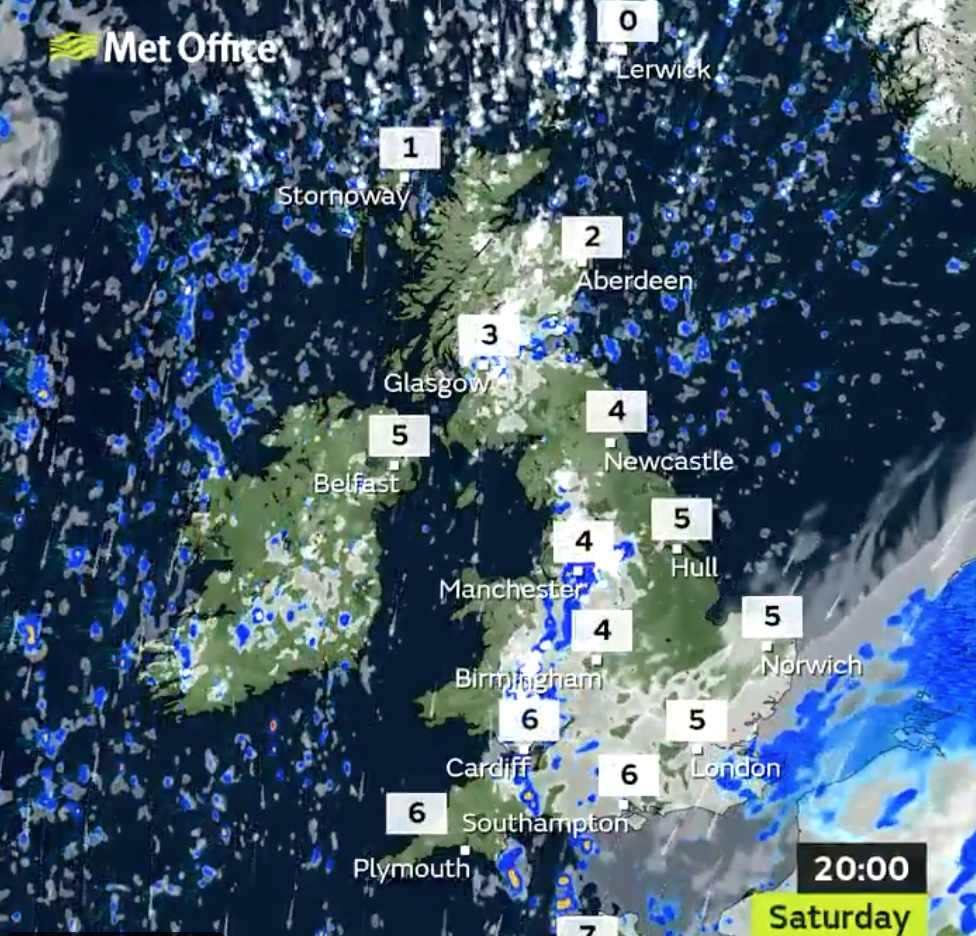 The latest weather charts indicates the mercury will dip below freezing on Sunday.

WXCharts' minimum temperatures charts also show temperatures will plummet to -2C in most parts of England and Wales tomorrow at 6am and as low as -6C in Scotland, the Express reports.

Meanwhile, the mercury will be as high as between -1C and 1C across England and Wales and between -2 and 0C, according to maximum temperature charts for tomorrow at 6am.

Images shared by news outlets showed car windshields shattered by hail about as large as baseballs in Orange Beach.

Extremely heavy ashfall rained down on parts of the eastern Caribbean island of St. Vincent on Saturday and a strong sulfur smell enveloped communities a day after a powerful explosion at La Soufriere volcano uprooted the lives of thousands of people who evacuated their homes under government orders.

Caribbean nations including Antigua and Guyana have offered help by either shipping emergency supplies or temporarily opening their borders to the roughly 16,000 evacuees fleeing ash-covered communities with as many personal belongings as they could stuff into suitcases and backpacks.

The volcano, which last had a sizable eruption in 1979, kept rumbling and experts warned that explosions could continue for days or weeks. A previous eruption in 1902 killed some 1,600 people.

The first bang is not necessarily the biggest bang this volcano will give, Richard Robertson, a geologist with the University of the West Indies Seismic Research Centre, said during a news conference.

AT LEAST SIX DEAD IN EARTHQUAKE

A strong earthquake killed at least six people and damaged buildings on Indonesias main island of Java and shook the tourist hotspot of Bali, officials said Saturday. No tsunami warnings were posted.

The U.S. Geological Survey said the magnitude 6.0 quake struck off the island's southern coast at 2:00 p.m. local time (0700 GMT). It was centered 45 kilometers (28 miles) south of Sumberpucung town of Malang District in East Java province, at a depth of 51 miles.

He said dozens of homes were damaged across the district, and rescuers had retrieved two bodies from the rubble of collapsed homes in the districts Kali Uling village. Two people were also confirmed killed in an area bordering Lumajang and Malang districts, while one person found dead under rubble in Malang.

Showery spells of rain are likely to push westwards across central areas and they could turn to sleet or wet snow at times, particularly over high ground, as the day wears on.

It will feel cold in the south east under overcast skies.

WINTRY SHOWERS TO HIT THIS AFTERNOON

Northern parts of the UK are expected to sunshine this afternoon but wintry showers are also likely.

In a Twitter update from the Met Office, the forecaster said: "Here's the forecast for this afternoon. Sunshine and wintry showers in the north.

"Cloud and rain in the southeast." 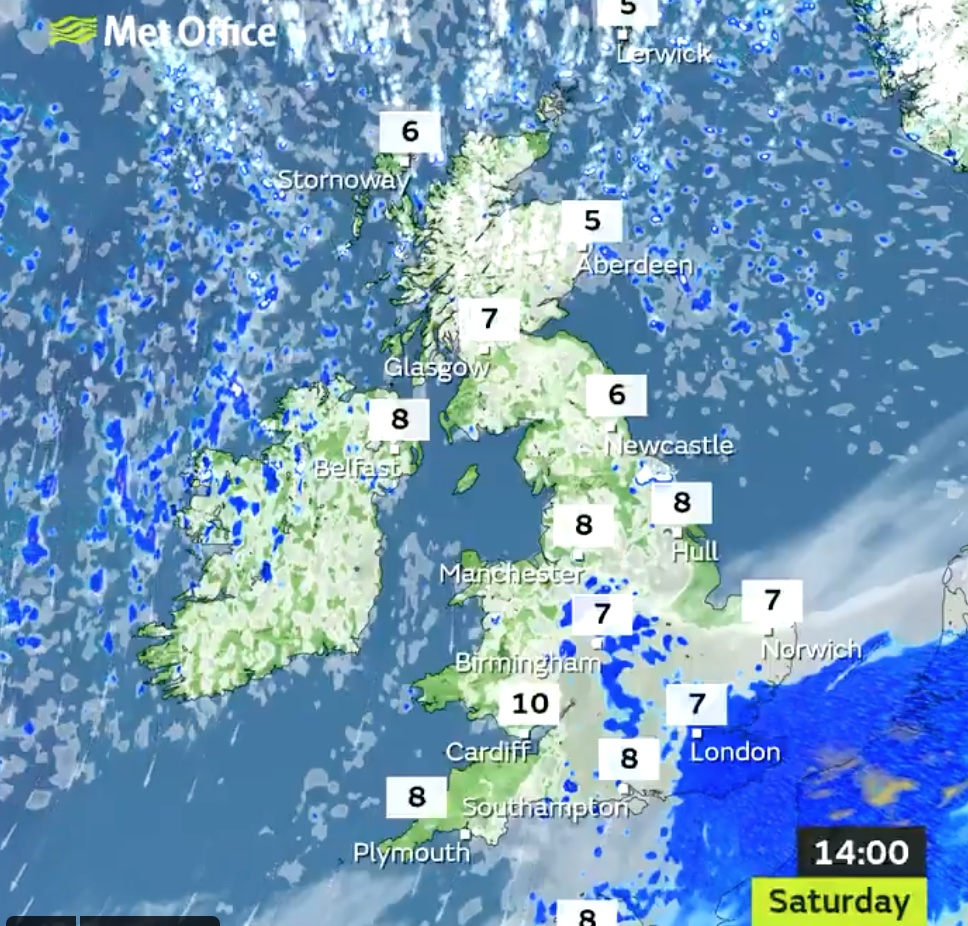 MERCURY TO PLUNGE BELOW FREEZING OVER WEEKEND

Temperatures are expected to plunge below freezing this weekend, according to the latest forecasts.

The mercury will plunge to around -1C in London on Sunday with daytime temperatures struggling to climb over 8C.

England endured its coldest April day in eight years on Wednesday, with the temperature hitting a freezing -7.5C in Benson, South Oxfordshire.

DRY AND SUNNY OUTLOOK FOR TUESDAY

The fine weather first appearing on Monday is due to carry on into Tuesday, according to forecasts.

Scotland though is likely to see patches of showery rain.

The Meteo Group said in an update: "Further showery rain across Scotland on Tuesday however elsewhere will be mostly dry with sunny spells across much of England and Wales."

Southern England will see sunny spells on Monday, as pubs and shops reopen under the government's plans for lifting lockdown.

The firm makes it 4/5 for the wind speed to reach 100mph in the mainland UK before Monday morning.

Looking further ahead, it is 3/1 for 20C or higher being recorded next week in the UK.

"It is going to be a rough weekend for many parts of the UK, with -10C likely to be recorded in some areas," said Coral's John Hill.

"Our betting suggests the wind speed may reach as high as 100mph in the mainland by the time the weekend is out.

"The good news is, next week is set to be much brighter. There is an outside chance we may even get temperatures as high as 20C."

HAIL AND SLEET DUE ON SUNDAY

Western and northern parts of the UK could see hail and sleet on Sunday, bringing wintry conditions.

A forecast by the Meteo Group said: "A largely dry start with early spells of sunshine however patchy cloud cover will tend to build during the day.

"Scattered showers will develop and these will be wintry in nature bringing hail and sleet across northern and western areas. Cloud will build into Northern Ireland and western Scotland."

It will be a frosty start to the day for many as the weekend gets underway, according to the Met Office.

Things will brighten up as the day progresses although there could be showers in some areas. 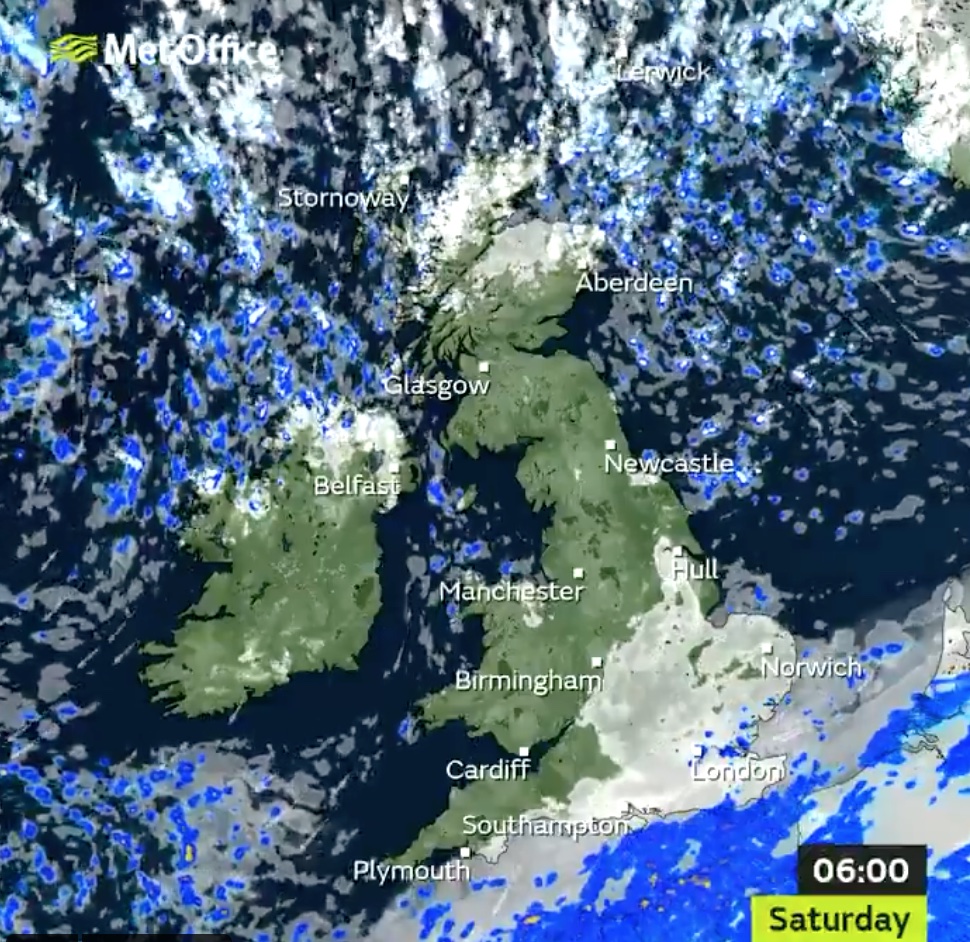