What is the R rate in the UK and why is it so important?

THE R rate is a key measure used to find out the rate at which one infected person is likely to spread coronavirus.

Government officials use the R rate, also known as the reproduction number, to decide when to ease coronavirus lockdown measures. 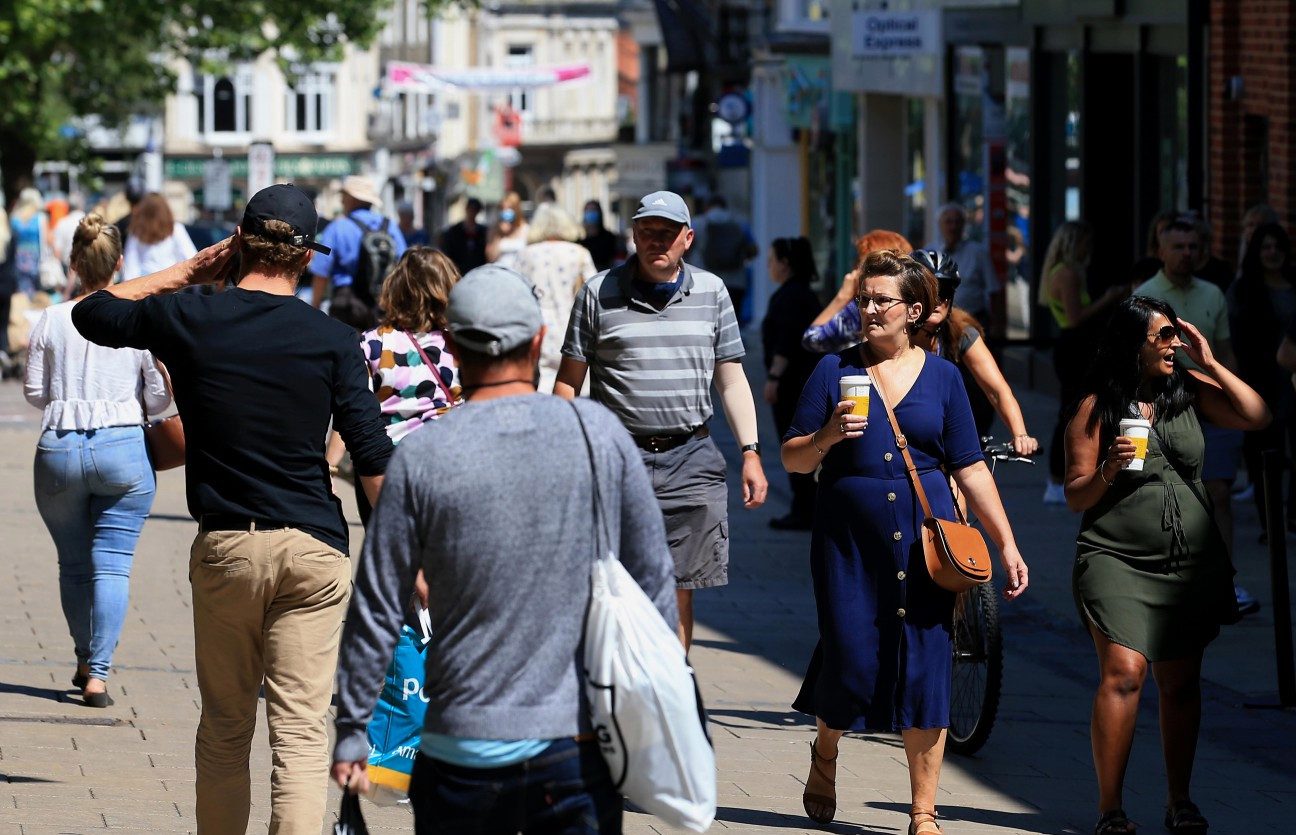 What is the R rate and how is it estimated?

R0, or R nought, refers to the average number of people that one infected person can expect to pass the coronavirus on to.

Scientists use it to predict how far and how fast a disease will spread - and the number informs policy decisions about how to contain an outbreak.

For example, if a virus has an R0 of three, it means that each sick person will pass the disease on to three more people - if no containment measures are introduced.po

It's also worth pointing out that the R0 is a measure of how infectious a disease is, but not how deadly.

If the R rate of a disease is one or above, it will spread exponentially, infecting more and more people.

Therefore, being below R1 is key because it means the virus will likely peter out.

Scientists work backwards to estimate the R rate, as we can’t know the exact moment people are infected.

A range of data is used, such as ICU admissions, hospital admissions, deaths and positive tests.

It takes two to three weeks for changes in the R rate to be shown in this data, due to the time gap between infection and the need for treatment.

What does the R rate mean for coronavirus?

The World Health Organisation (WHO) estimated at the beginning of March that the coronavirus R rate stood between 2 and 2.5 - meaning the spread of the virus could snowball, with each infected person infecting between two and three others.

But despite lockdown and the social distancing measures that have been in place, as of August 7, the UK average is at 1.0.

In May, the R rate crept up, but it is thought that this is due to the outbreaks of the virus in care homes.

In comparison, the R rate of the seasonal flu is estimated to be roughly 1.3, while for the highly infectious measles it's between 12 and 18.

Despite this, these figures are not set in stone because a given pathogen's R value is constantly changing, as behaviour changes or immunity develops.

Jonathan Ball, professor of molecular virology at the University of Nottingham, told The Telegraph: "R0 is an indication of how much an infectious virus will spread in a population, and various things impact that value.

"The susceptibility, size and density of the population that the infection is introduced into matters, as well as the infectiousness of the virus itself."

Predictions of the R0 for Covid-19 are currently varied because no one knows exactly how many people have been infected in total.

According to modelling published by Imperial College London, the R value stood somewhere between 3 and 4.6 in Europe before lockdowns came into effect.

What is the R rate in the UK?

To keep the Covid-19 epidemic declining, the R rate needs to be less than one.

As of October 25 London now has the highest R rate in the entire of England at 2.86, according to Imperial College data.

Other regions with an R rate of 2 or more are South East, East of England and  South West.

In fact, their findings suggest that in the capital the R number could lie somewhere between 1.47 and 4.87.

Meanwhile, the North East - which is currently in Tier 2 - is estimated to have an R rate of 0.57.

It's followed by the North West - where many areas including Greater Manchester and Liverpool are under the highest level of restrictions - as the region with the next lowest R rate of 1.21. 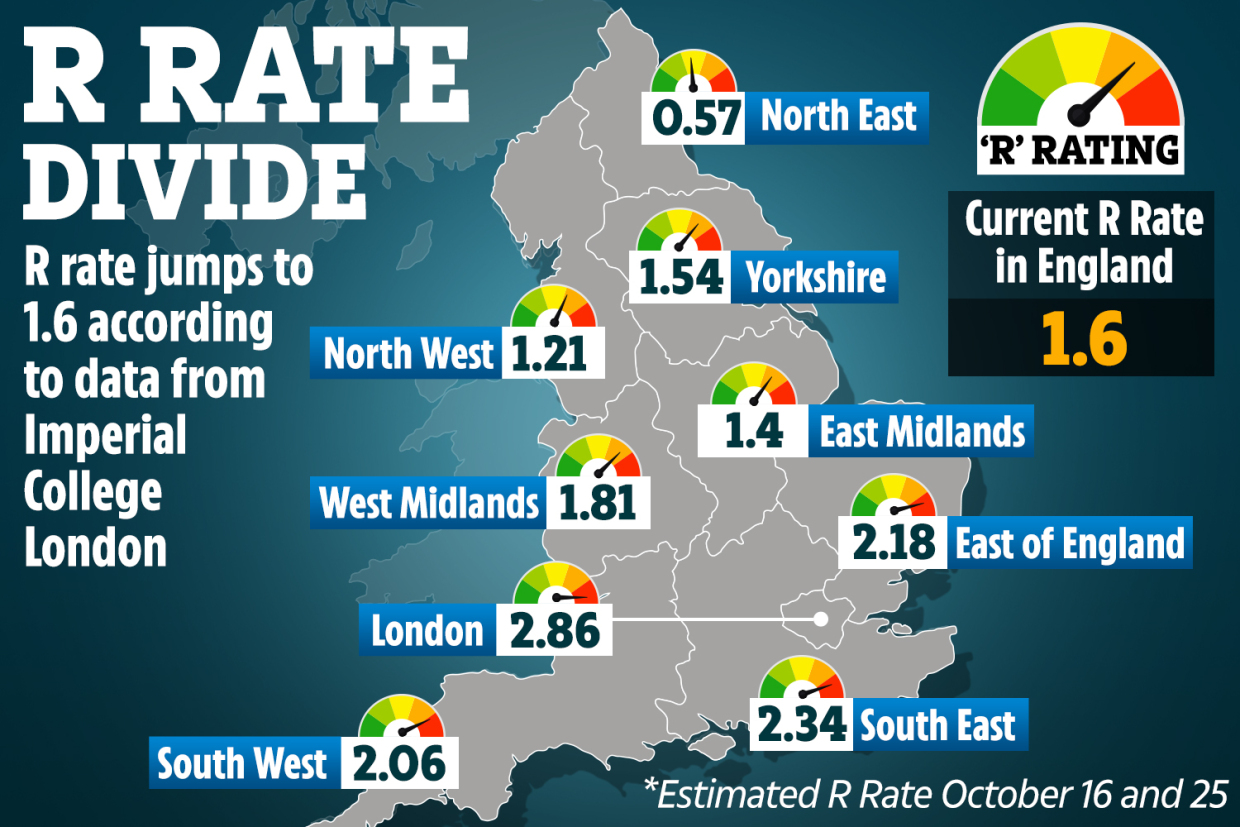 What can reduce the R rate?

There are lots of infection control measures experts can use to push this number down and reduce the spread.

A study in the Lancet in April, for example, estimated that travel restrictions in Wuhan caused R0 to drop from 2.35 to 1.05 after just one week.

Belgians must pick two 'cuddle contacts' for new lockdown - who would YOURS be?

The social distancing measures introduced in the UK have had a substantial impact so far.

This is because as less people come into contact with one another, there is a lower chance for the virus to spread.

More generally, a vaccination would help reduce the R rate of any given disease as this would mean that one infected person wouldn't be able to infect an individual who had been given a vaccination.